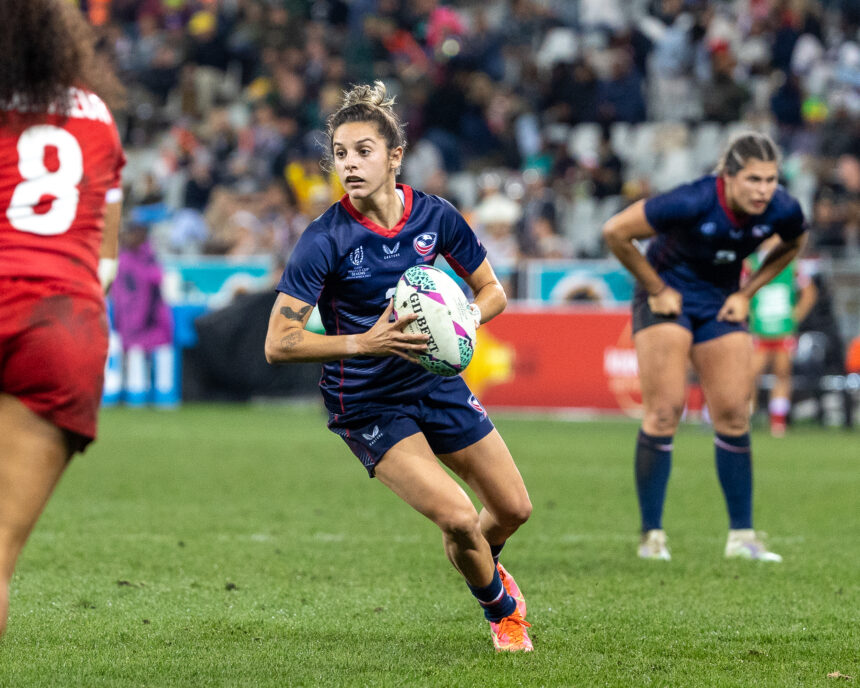 The 2022-23 HSBC World Rugby Sevens Series opened in Dubai for the women, and the USA and Canada kicked off the tournament against each other. The Eagles banked their first win of the new season, downing the Canadians 12-7 in Pool A. China is next at 4:05 a.m. EDT and will live-stream on Peacock. [Lead photo: Alex Ho from RWC 7s]

The game had a bit of that season-opener feel to it but the Americans got the job done with a mostly seasoned squad – although it was the series debutant who scored the tournament’s first try. The USA kept the opening kickoff, thanks to a good clean-up from Ilona Maher, who over the course of the game put in at least three breakaway-halting tackles. The Eagles worked out some timing in a few phases, and then Kayla Canett cut in from the sideline, stepping multiple defenders and opening up some space with which Sammy Sullivan could play. After a high-tackle penalty, Sullivan went quickly through the mark and turned Bianca Farella around en route to the try, 5-0.

Overall, Farella was nuisance. Returning to the squad after a hiatus that kept her out of the Rugby World Cup Sevens, Farella’s counter-rucks disrupted USA rucks, and her ball-in-hand skills and pull away speed would produce five points in the second half.

But first, the USA had another score to log. From an attacking scrum, halfback Alena Olsen broke weak and angled toward Naya Tapper on the sideline. The defense had the bodies for easy coverage, but Tapper read a slight hesitation after the pass and just cut right between the defenders. It was simple and totally worked for the centered try, which Canett converted: 12-0.

Canada built some momentum into the break, when Olivia Apps attacked quickly from a penalty deep in Canada’s end and went back and forth with Farella to scramble the defense. There were some good connections out of contact, and Charity Williams proved to be a liability out wide, but the USA defense held strong and was rewarded with the 12-0 lead into the half.

Canada got on the board approximately two minutes into the second half. Krissy Scurfield stepped out of bounds before contact, handing a lineout to the USA. But the throw-in was not straight and Canada regrouped with a scrum. Canada head coach Jack Hanratty had asked for precision in the second half, but that did not happen as the USA defense pressured and the handling suffered. But then Farella cut back across Tapper and for a long-range try, and Bre Nicholas added the extras: 12-7 with a lot of rugby to play.

USA got into a little bit of trouble – a pass into touch, not-rolling penalty, offsides penalty at the scrum – and Canada marched deep into Eagle territory. Just went a score felt imminent, Kristi Kirshe hit the pile with ball-dislodging force, and Olsen was there for the pick-up and quick pass. Captain Tapper tore away with Jaz Gray in tow, and they had a 2-on-1 that looked like a recipe for a long-range try, but miscommunication put the ball on the ground.

The final minute was a rapid exchange of possession several times over, but the key turnover occurred due to very good pressure defense – notably, from Spiff Sedrick and Kirshe – off a Canada scrum. That allowed the USA to work the clock, set a stable scrum and kick the ball to touch for the 12-7 win. China’s next.