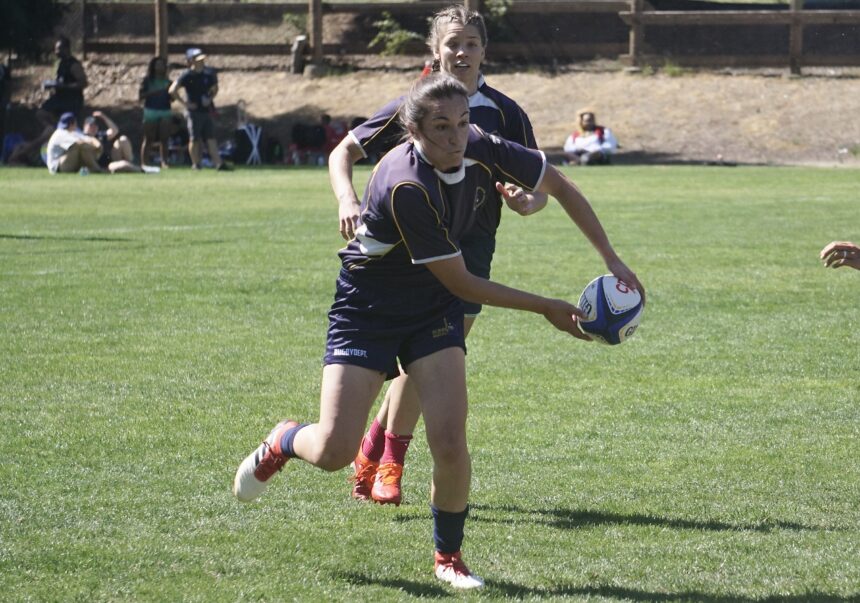 In Week 8 of the Women’s Premier League (WPL), two of the four rugby matches went off as scheduled. The Blue Conference replayed its Battle of the Bay, and the outcome draws the top of the table even closer together. In the Red Conference, New York is still undefeated and guaranteed a berth to the championship bracket come nationals, but much like the Blue Conference, that second spot is not yet locked up.

When Life West and Berkeley met on April 23, the Gladiatrix won 40-33, and it was a big second-half push that afforded the All Blues the bonus point in the loss. There was a different tempo in Saturday’s rematch, as the teams traded scores and exchanged the lead during the opening 20 minutes.

Berkeley wing Evan Hoese dotted down first, and then alternating with Life West, teammates Jade McGrath and Kristen Siano followed with tries. Talica Vodo put the Gladiatrix on the board, and then wing Kayla Lawson scored. Life West scrumhalf Aimee Ramos kicked two conversions and Berkeley flyhalf Lauren Rhode kicked one: 17-14 to the All Blues after the first quarter.

“We have historically, sort of mentally, not been able to hang with Life West until the second half,” Berkeley head coach Hannah Stolba said. “Those first 20 minutes, we were just waiting for them to score, and when they did, it was sort of a self-fulfilling prophecy.

“Once we started having pretty consistent set piece dominance, that gave us a big boost,” the coach continued. “That happened early on in the game but once we realized that that could continue to happen, everyone got behind it.”

McGrath and Siano scored before the half and Rhode’s two conversions put Berkeley up 31-14. There was great, positive energy during the break, and then the team readied for planned substitutions in the second half.

“We’ve taken a different approach with the team in terms of rosters and the bench, and that has given people a boost in a lot of ways, too,” Stolba said.

“This might be a skewed perspective but we don’t use reserves in this country very much and in an intentional way,” the coach continued. “I’ve been on quite a few teams and I’ve seen quite a few teams go through the, ‘If you’re not starting, you’re not a benefit,’ and we’ve really tried to shift the mentality with the girls this year. That it’s about a puzzle and we’re all trying to put the pieces together. Who plays best in which scenarios and with whom? Everyone is buying into that and that helps a lot, knowing we have a really deep bench, and that it’s something we want to utilize and will.”

Both the Life West and Berkeley rosters differed from when the teams met earlier in the season. Berkeley’s Division II season has ended and so some players are working into the lineup. And Life West has had several Eagles depart for the Pacific Four tournament in New Zealand. All Blues scrumhalf Shelby Lin has also been called up for overseas duty.

Vodo opened up the second-half scoring and Ramos converted (31-21), but then Berkeley answered quickly through Siano. In the final 15 minutes, reserves Elena Edwards and Ceara Lafferty scored and Siano added a conversion in the 48-21 win.

“The most important thing is that it solidifies that we’re going to meet our regular-season goals for the year,” Stolba said of the win’s impact. “If we do the right things over the next two games then we should meet those goals. … And knowing that we have the opportunity to go into nationals as the number one seed, that’s a big bonus for everybody.”

Berkeley and Beantown play an important match in Piedmont, Calif., this Saturday. The Massachusetts team makes its second trip to NorCal, following a weekend in which its final home game against Atlanta was canceled. The Harlequins host Chicago North Shore this weekend and then pull a double-header in NorCal on June 11-12.

New York heads into its bye week and then closes out the regular season in Colorado on June 11. The Gray Wolves were meant to travel to Twin Cities last weekend, but due to Covid challenges, that trip did not occur. The teams are deciding whether a make-up game can occur, but the only available weekend is the one before nationals. The Gray Wolves will fly out to San Diego this weekend, and Twin Cities is on the road to ORSU.