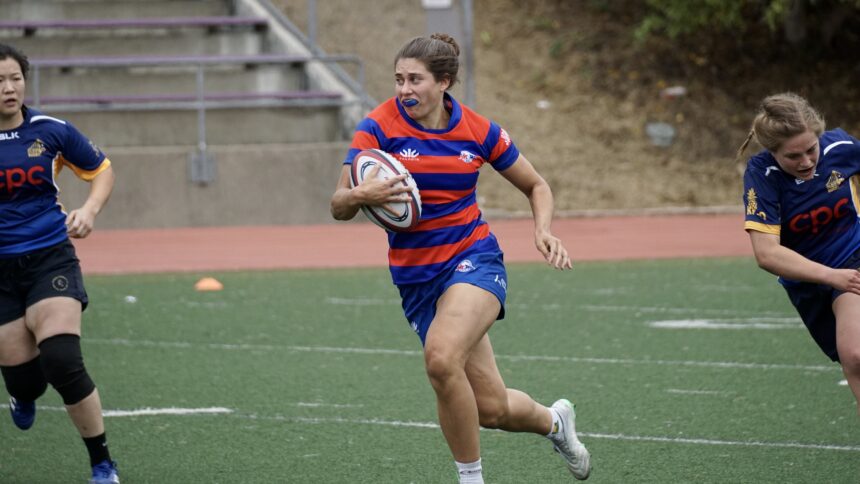 USA RUGBY – Week nine of the Women’s Premier League saw all four games come off as scheduled, and they were all meaningful, regardless of the impact on the standings and post-season. [Note: The Rugby Breakdown produces the weekly WPL write-ups for USA Rugby.]

In the Blue Conference, Beantown traveled to Berkeley and came out on the winning side of a 24-19 contest – the team’s fourth single-digit decision this season.

“We’ve already had three games where it came down to the last five minutes, one try,” Beantown captain Paige Stathopoulos said. “I’m very proud of this team. We kept our heads up the entire season. We get back to practice, we keep working. We never really let it get to us. I think everyone is really elated to come away with a win today.”

An Amanda Schweitzer line-break and quick support from Stathopoulos saw the centers team up for the game-opening try, and then Schweitzer made it 10-0 with a long-range intercept try.

“She works her butt off,” the captain praised Schweitzer. “She stepped up today and put the team on her back. Same with our loosehead, Rick [Jarrell]. Stepped up on both sides of the scrum and lineout; just being a leader and executing.”

Berkeley got an important try right before the break, as Tyra Norlander dove over the line and Kristen Siano converted: 10-7 to Beantown.

The teams then traded scores in the second half – Emily Prentice and Genevieve Quirion for Beantown, and Elena Edwards and Ros Okpara for Berkeley. Schweitzer had taken over conversion-kicking duties and added four points, while Siano added two points: 24-19 with approximately 10 minutes to play.

That final stretch stayed in Beantown’s end, and Berkeley looked ready to score. A quick lineout from the All Blues caught Beantown resetting slowly, and as the ball moved wide, there was real opportunity to take advantage of a scrambling defense. But Stathopoulos stripped the ball out of the tackle, the ever-present Megan Pinson Neyen was there for the pickup and drive forward, and pressure subsided. The game ended with a kick to touch and bonus-point win.

“We’re big on saying, ‘Control what you can control,’” Stathopoulos said. “Inside our 20 meter in the last five minutes, we worked really hard to stay away from getting penalties and just holding our standards higher. It’s about getting comfortable playing under pressure there, and doing what we can to get out of our red zone.”

Also in the Blue Conference, Atlanta played its first 80-minute game of the season on Sunday and defeated Chicago North Shore 67-12 at home.

“I am very happy that we were able to bring the numbers together,” said Atlanta prop Lisa Jackson, who served as forwards captain on the day. “We all came from different states to play. We had a good core group of people who are in Atlanta, but we opened it up to all of the Southeastern states, and people came.”

But the team had never played together. There was a walk-through on Saturday, but that was it.

“The product we put on the field, it’s like we had been practicing all season together,” Jackson said, still somewhat stunned. “We went to simple rugby, followed those basic principles, and we had some key people in key stakeholder roles that kept us moving in the right direction.”

Jackson called out halfbacks Meredith Nelson and Corinne Heavner for directing traffic, as well as center Cyndi Campbell, who scored four tries in the first half, for keeping the team moving forward. Heavner and Campbell are also big behind the scenes and put in a ton of work to make these playing opportunities happen. Jackson was also impressed with younger players like Saher Hamdan, who flanked, for being a positive, communicative influence on the day.

“The scoreline was a large margin but North Shore did not come to roll over. They were very physical,” Jackson said. “That was great, because we had a lot of players who had not played that caliber of rugby before, because they’re either coming straight from school or playing club rugby somewhere else.”

“To overcome, everything. To grow,” Jackson summarized the team’s goals this year.

In the Red Conference, ORSU got its second win of the season, hosting Twin Cities in a 34-17 contest. The visitors went up first, as scrumhalf Lynn Kleyer scored and converted the opening try three minutes in. But then the Jesters mobilized and answered with back-to-back scores from player-coach San Juanita Fetuuaho and wing Mariko Moore – 10-7 into the break.

“We are typically known for our forward dominance, but this game, the backs really showed up and showed out,” Hart explained. “Alex Fletcher really owned the fullback position, making several try-saving tackles along with some very strong carries. Both wings got some try time action with Mariko Moore having a spectacular game with two tries, and earning Back of the match.”

Kleyer tied it up with a penalty a few minutes into the second half, and then Moore finished off a second try, which inside center Natayah Bauer converted. With a yellow-card advantage, ORSU put wing Shamarica Scott away for a 22-10 lead, and then co-captain Paris Hart pushed it out to 27-10 with approximately 15 minutes remaining. The Amazons kept pushing and put one more converted try on the board, but prop Tiara A’au ended the day with a try, which Scott converted: 34-17 the final.

“Ending league play with a home win was everything,” Hart closed. “We’ve had a tough season with losses and several vets out with injury or illness. Our local rugby community has always supported us, it felt great to give them a win. Despite raining the entire time, there was no shortage of supporters and family cheering us on. The crowd loved every bit of the action and exactly the kind of confidence boost the team needs going into nationals in a few weeks.”

At the top of the conference, the Colorado Gray Wolves secured a spot in the national championship semifinals after a 49-7 win against the Surfers.

The Gray Wolves took a 29-0 lead after 30 minutes, as Dee Nash, Chloe Jex, Hannah Long, Madison Slaught and Kate Herren scored tries, and Hannah Tennant handled the conversions. San Diego inside center Lauren Thunen broke the shutout with a try and Hunter Griendling conversion, but the half ended with a Tennant penalty and 32-7 lead to the Gray Wolves.

Herren opened up the second half with a second try, and props Caitlin Weigel and Sam Luther followed with scores of their own: 49-7 with Tennant’s conversion. Colorado hosts New York in its final regular-season match, but regardless of the outcome, both teams will represent the Red Conference in the national semifinals.