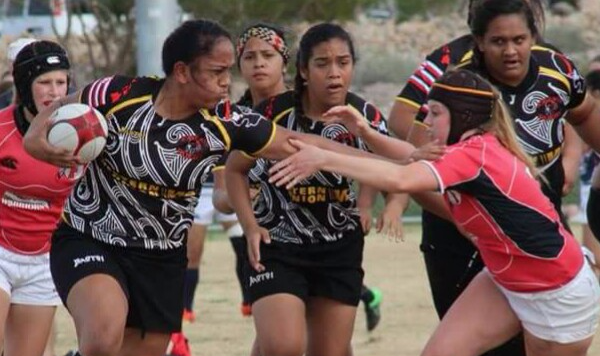 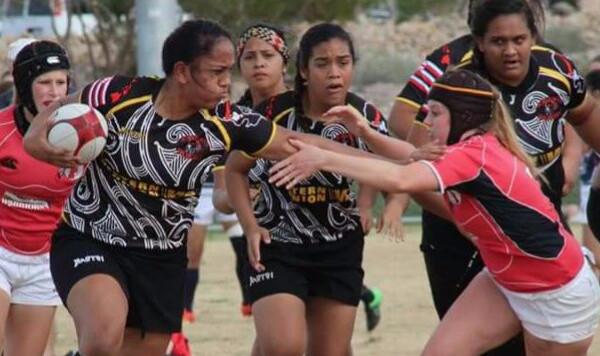 Kahuku vs. Fallbrook at the LVI. /// Photo: The Picture Lady

“Eye-opening” is a sentiment that Kahuku coach Nusi Tukuafu invokes when describing his players’ rugby experiences. The team, which is based on Oahu’s North Shore, is in its second year of existence and has committed to traveling for competition, and those trips have opened up the world. The team continues to grow and test itself, and this season will peak with a trip to nationals.

Tukuafu helped start Hilo Reign’s girls team on the Big Island, but that process contrasted with the creation of Kahuku’s girls program. For one, Kahuku draws from the North Shore’s largest high school, which covers seven villages.

“It’s a gold mine,” Tukuafu considered his roster, which is approaching 40 players. “I’m trying not to cut anybody because we’re still in our second year, and I don’t want to discourage anyone from coming out. Instead, I train them hard, so if it’s too tough for them, then they don’t come back. But everyone’s coming back. I need varsity and JV teams because our numbers are so big.”

Athletes are leaving their number-one sports – softball, basketball, soccer, volleyball – despite the coaching staff’s pleas to remain multi-sport athletes. Tukuafu receives phone calls from other sports’ coaches asking for practice and match times, so they can schedule around rugby in an attempt to keep their players.

The Kahuku players enjoyed the game from the outset, but it wasn’t until the team traveled to Portland, Ore., for last year’s Regional Cup Tournament (RCT) that athletes saw rugby in a new light.

“Three of our girls were getting looked at and two are currently at Lindenwood,” Tukuafu said. “Now there’s interest. ‘If she can do it, then I can do it.’ Life after [high school] graduation, leaving the island – it’s a possibility. It’s a whole new reason to go to college.”

Six of nine seniors are being scouted, with Lindenwood and new varsity program Wheeling Jesuit top among recruiters. No. 8 Tui Roberts and flyhalf Jess Lessary captain the squad and are responsible for leading a team that is currently 7-0 in league play. 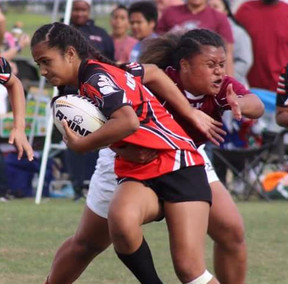 But there is a lot of excitement in the younger ranks, too. Six of the 10 veterans from the Portland RCT are sophomores, and five of them start. Hooker Nese Tito “never comes off the field,” according to coach. Her fitness is top-notch, she’s solid in all of her set-piece duties, and she knows how to find and attack space.

Tighthead prop Harley Hurlbutt comes from softball and brings good size to the pitch. She caught Wheeling Jesuit coach Tal Bayer’s eye as a mobile pack player. Lock Tiara Letoi is also a big, strong forward who fortifies the scrum and lineouts, and flanker Amberae Falemalu is shaping up to be next year’s captain. She really broke out after the Portland RCT.

In the backs, inside center Taina Scott is the hallmark of defense, and freshman Chanel Kahala has been the highlight with ball in hand. She attended last year’s RCT as an 8th grader, and was the standout during LVI wins over Fallbrook and Bishop O’Dowd.

All of this talent was on display in Las Vegas, and college recruiters took notice. But the scouts weren’t the only beneficiaries at the LVI. For more than half of the team, the tournament marked a first trip to the mainland.

“Their eyes really opened in Vegas,” Tukuafu said. “They saw what’s out there, beyond what’s just here on the island. Competition wise, it’s higher. And the officiating is more up to date. It was a lot of shock and awe – to be in this whole world of just girls high school rugby.”

The effect was immediate. Training picked up from three times per week to five, and progress could be felt in the widening scorelines against league opponents Kalihi and first-year Kamehameha, a private school for students of Hawaiian descent. A big test came during spring break, when Ruggahfest lured a combination Hilo-Kona team. Kahuku won 7-5, and the game might have been a preview for the state final.

“I knew what to expect against Hilo because I coached their four seniors,” Tukuafu said. “Asi Holika – she attended All American camps – her sister and two others, they’re feisty players. We had prom the night before we played them so had some girls dragging, missed scoring opportunities from the one-meter line. But we defended them well, and their outside center broke through once for a score.”

Kahuku has one more league game and then the two-day state championship begins April 16. Afterward, Kahuku will look toward St. Charles, Mo., the site of the single-school national championship. The team will have its challenges – including seniors traveling directly from graduation to the airport and jet lag – but Kahuku is eager to sample another segment of high school rugby. Tukuafu is also thinking about where he sees the team in a few years.

“I’d like to go to the club championships with Sacramento and Danville, but I’ve got to take small steps,” Tukuafu said. “We’re in our second year, and so single-school is a better fit for us. Maybe when our freshmen are seniors, then we’ll be able to compete with them. When we played South Bay in Las Vegas – they have girls with four or five years’ experience. That told me we’re not ready for club, but we’re on our way if we can stay on this track.”