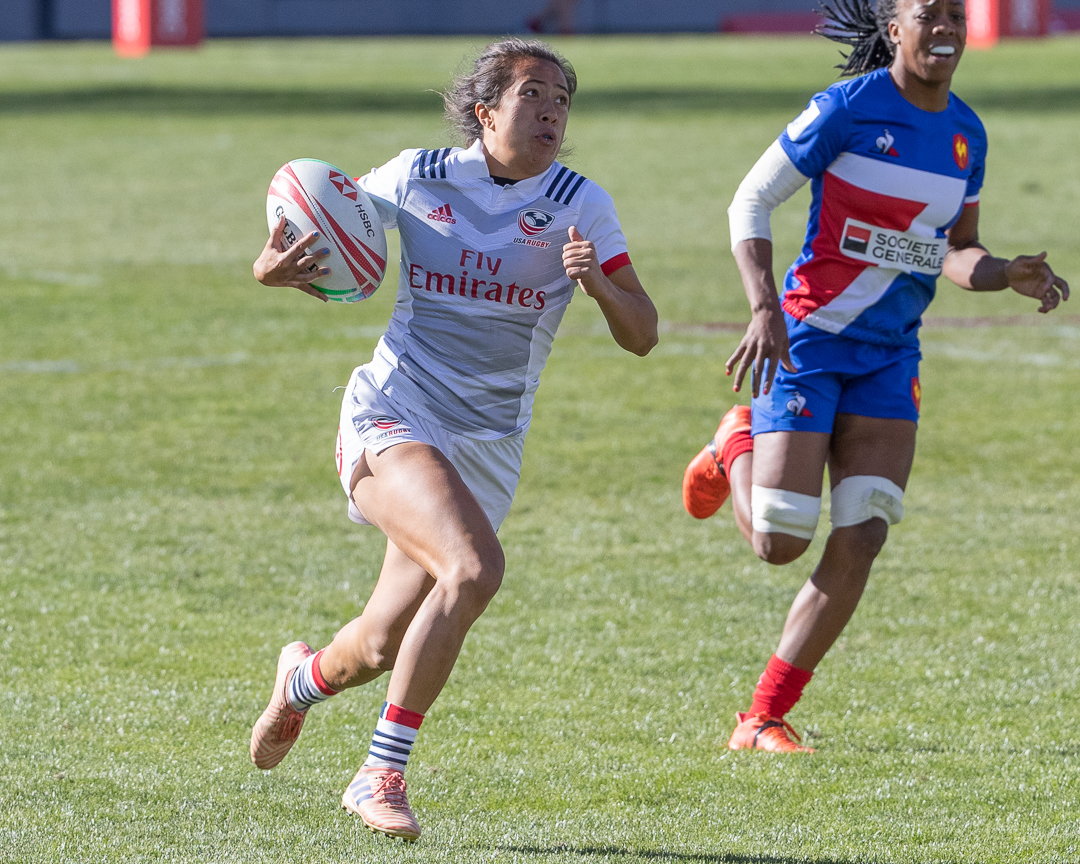 When Jessy Tremouliere scored the go-ahead try with virtually no time left on the clock, it looked like France was heading to the final of the HSBC USA Women’s 7s tournament final. But there was one more possession, one more chance for a lead change – could the Eagles remained composed and yet fiery for one more go?

“We’ve been working on being really mentally strong so all that was in our head was the next job, the next thing we had to do,” USA 7s Eagle Alena Olsen recounted the final push that produced a 21-19 win over France. “If we didn’t break, we’re gonna set that ruck. We’re going to secure the ruck and then we’re going to play out, see where the best space is, and that’s exactly what happened. And we all did it together.”

Olsen herself finished off that effort, bursting through the line for her first international try. Alev Kelter’s conversion sealed the win but the rest of the game was equally thrilling. 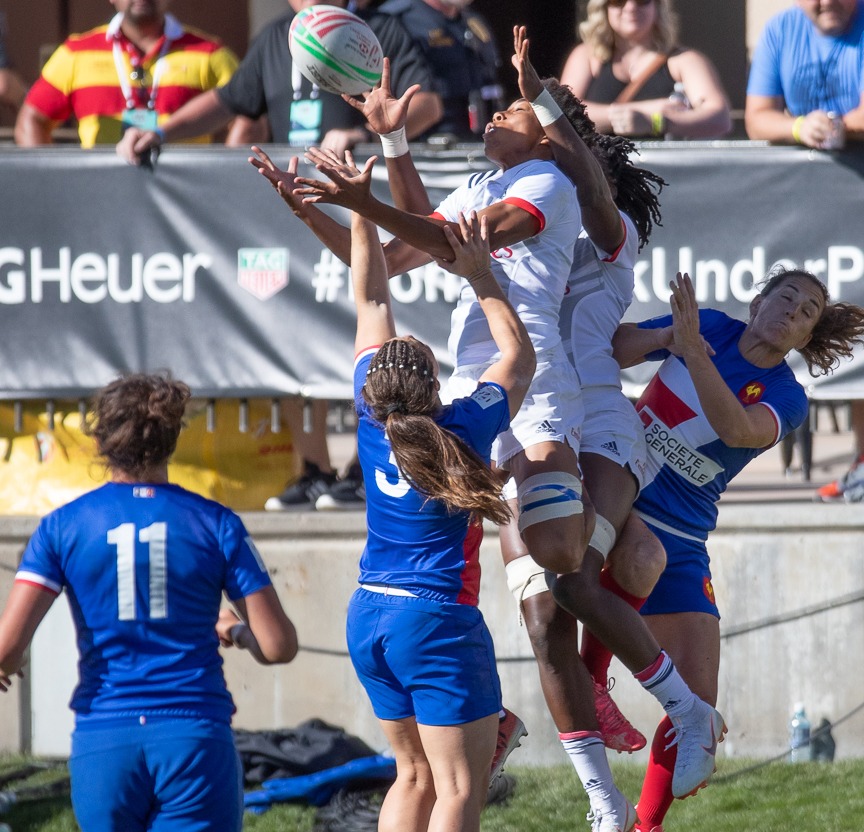 Thomas and Emba in the air / Photo: Alex Ho

Early on it was France that was threatening to take the first lead, as a couple of U.S. penalties set up Les Bleus for some good scoring opportunities. Anne Cecile Ciofani nearly went over in the corner if it wasn’t for Ilona Maher’s tackle into touch, setting up a five-meter lineout to the Americans. Kristen Thomas did well to get the Eagles moving forward, and Maher picked up the torch from there. Maher pumped her legs for as long as she could before offloading to Cheta Emba for the long-range try. Nicole Heavirland added the conversion for the 7-0 lead.

As the half neared its end, France was back in the U.S.’s red zone. The defense did well to swarm a ballcarrier, who hurled the ball away for fear of the poach. But a penalty followed and France captain Montserrat Amedee dove over the line untouched, 7-all with Amedee’s conversion. 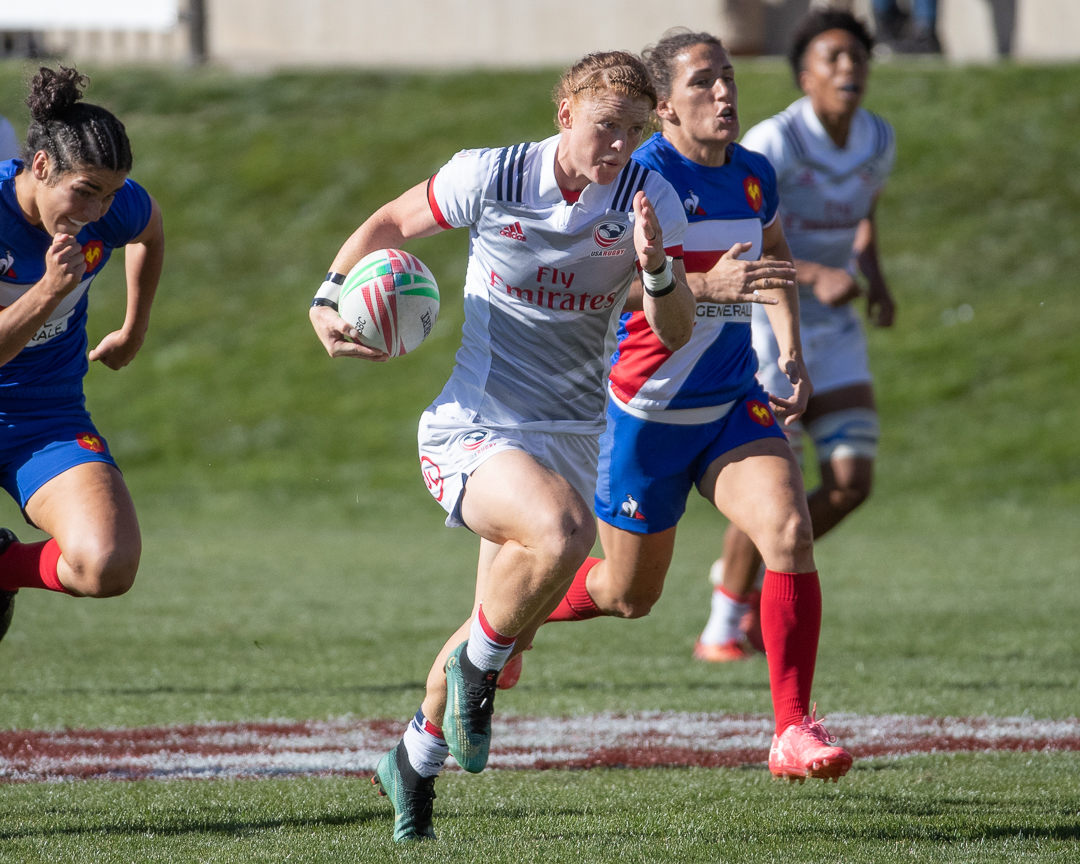 The Eagles again scored quickly after the break, taking a scrum from their own and Lauren Doyle switching with Kelter for the breakaway. Kelter kicked the conversion for the 14-7 lead. But then the energy swayed and France began to play really quickly, taking advantage of penalties and spreading the defense. Julie Annery dove over from in close and Caroline Drouin nailed the conversion, 14-14.

France stayed on the front foot and despite the USA’s hustle, Les Bleus was able to put Six Nations star Jessy Tremouliere into the try zone. When the conversion kick failed, there was no time on the clock.

The crowd was tense, the USA team was focused as the restart sailed through the air. With every pass, every ruck, the cheers from the stands intensified. A couple of bustling runs eventually got to Olsen, who tore away for the try. Her reaction:

The USA now heads to the Cup final against New Zealand, which beat the Eagles 35-12 during pool play on Saturday. The Black Ferns are consistently solid but the USA is riding a high that can fuel another stunner.