[*USA Rugby has reported a 70-5 final score but it’s wrong. USA Rugby’s CMS erroneously recorded an unattributed conversion at minute 0, but per the video, the first Lindenwood conversion was unsuccessful. The video scoreboard is accurate until after the third try is scored.]

As expected, Lindenwood and Central Washington brought loads of physicality to the pitch, but the Lions were able to consistently win their own ball and launch that fast attack from sideline to sideline. Less than a minute after kickoff, that attack saw wing Sativa Tarau-Peehikuru score in the corner. The New Zealander also finished off a lovely driving lineout from 10 meters out, stepping into the line for the dive-over.

The Lindenwood lineout is a solid attacking platform and the backs do well to send leading passes down the line. The ball often finds fullback Caring De Freitas and she is arguably the toughest player to take on in the open field. The evasive runner scored two tries in the first half. 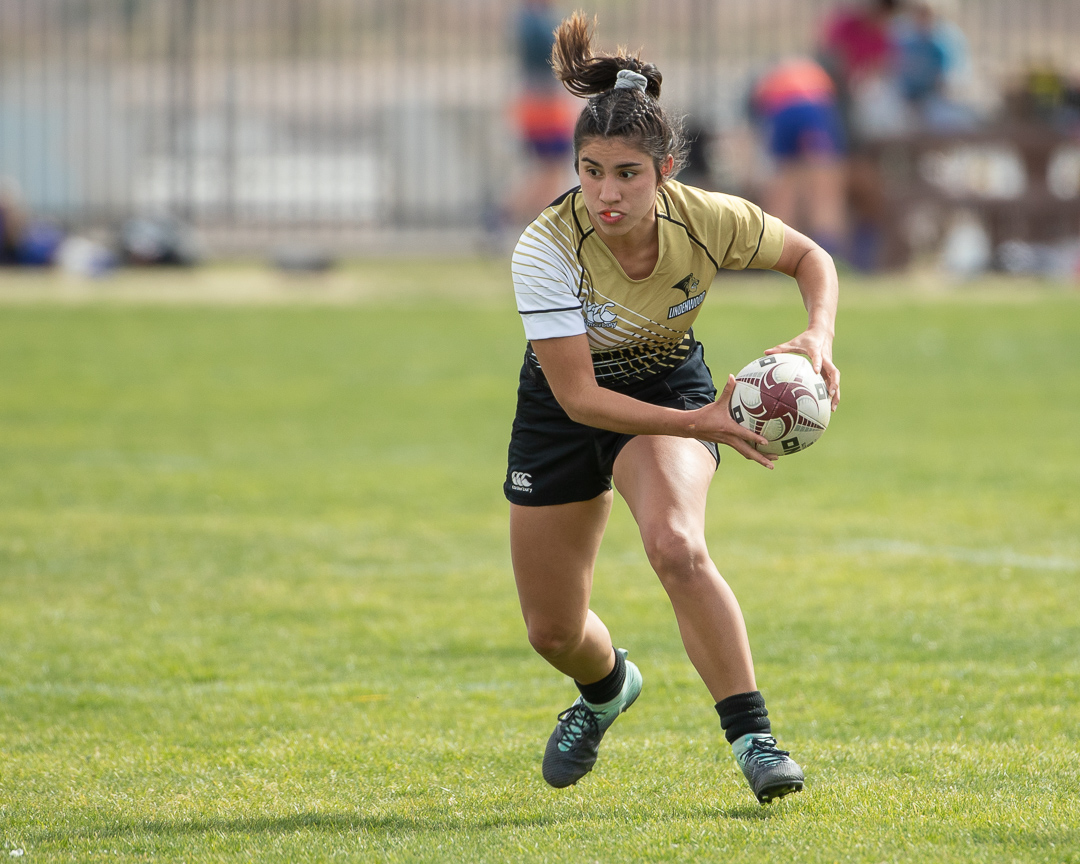 Freshman flanker Morgan Freeman also scored two tries, an apt reward for the mountains of work she took on, including a stint at scrumhalf. Freeman, Mckenna Strong, Destiny Arena and later Izzy Manu were all great go-forward players and helped break through the thick Wildcat defense.

McKenzie Hawkins kicked three of her five conversions in the first 40 and also added a penalty to account for Lindenwood’s 39 first-half points.

Central Washington struggled under the pressure and penalties were an issue. The Wildcats did however enjoy a substantial attacking campaign in the first half, and it was commemorated with a Sui A’au dive-over try.

Lindenwood’s forwards produced another turnover and scrumhalf Annakaren Pedraza quickly moved the ball away to De Freitas, who connected with Tarau-Peehikuru on the sideline. The wing fed Teresa Bueso Gomez back inside before the tackle and the outside center dotted down for the try, 44-5.

A yellow card to Hannah Lewandowski gave Lindenwood even more room to run, and De Freitas and subs Manu and Casey Karl all scored (61-5). Karl ended the day with an intercept try that Hawkins converted, 68-5 the final.

There was a bit more drama in the second semifinal, especially as Penn State surged in the final quarter, but Life never lost its lead once establishing it. The Running Eagles lit up the scoreboard after an intentional knock-on set up an attacking scrum near Penn State’s 22. Flanker Karen Faget, who was playing No. 8 for this set piece, peeled off the back and linked with Bridget Kahele on the weak side. Out of the tackle, the scrumhalf hit power wing Summer Harris-Jones along the sideline for the try, 5-0.

Inside center Marin Marin was really good in the middle of the field and connected well with everyone around her. She helped release freshman Susan Adegoke – who had a fantastic day – for the wing’s first of three tries. Alex Sedrick put everyone of the front foot with a good restart return, and good north-south running from Megan Rom and Faget again set up Adegoke with some space and another try. Kahele converted for the 17-0 lead.

But it was far from a dominating performance and that trademark Penn State pressure pushed Life into a strong of penalties. Darina Roe pointed to the posts once in range and added three points before the half, 17-3. 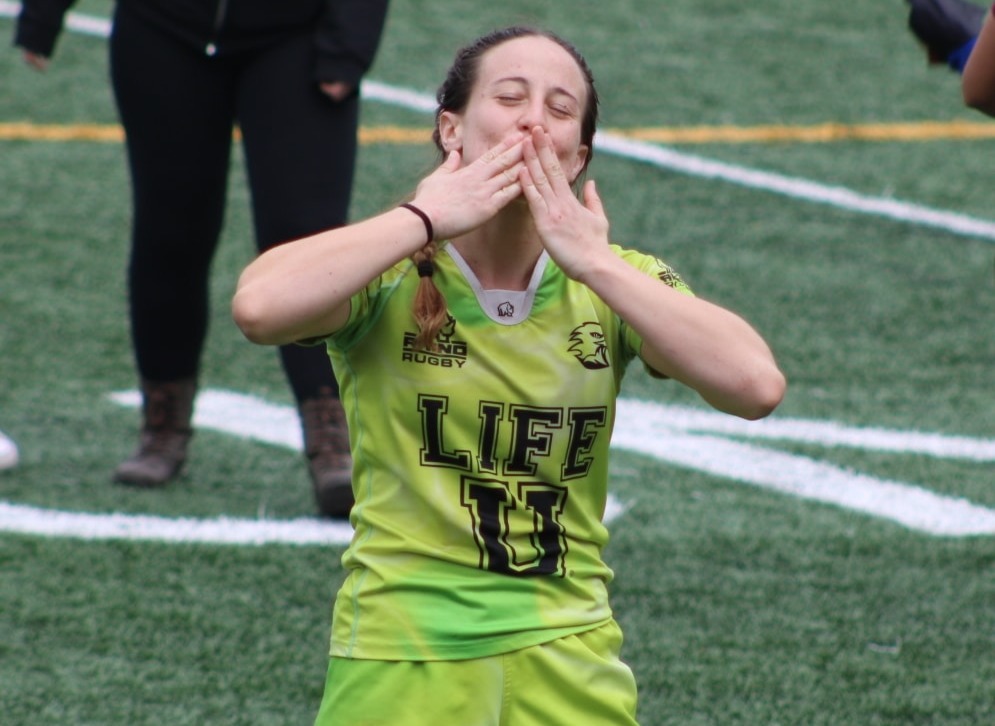 Gianna Solomon kicked off the second half with a nice line through the defense. Adegoke tracked the breakaway just meters from the line, and Kayla Canett was there in support. The flyhalf then chipped through to the try zone, and wing Natalie Bjorklund won the race for the dot-down. Roe converted, 17-10 to Life.

Two quick, crucial scores followed. Life stole a Penn State lineout and moved the ball to Adegoke, who stepped her way through the defense before hitting Harris-Jones for the try. Shortly afterward, Adegoke scooped up a dropped ball before Penn State could swarm and again dazzled the defense for a long-range try. With Kahele’s conversion, Life enjoyed its biggest lead of the game, 29-10.

It looked like the game was flowing ever more in Life’s direction, as the Running Eagles built toward another forward-perpetuated try. But the final pass was knocked on at the line, and Canett was there for the pick-up. The Eagle raced 90 meters and Life wing Adrionna Duncan – who came on for the injured Alex Sedrick and did a great job fielding Penn State’s many kicks – planted the pursuit tackle. Canett was able to feed Bjorklund back inside just before contact, and the wing centered the try, which Roe converted, 29-17.

Penn State kept the pressure on and drew Life into repeated penalties and a warning. Canett took a chance off one penalty opportunity inside the Life 22, but put a little too much on a cross-field kick out the back of the try zone. It allowed Life to send a drop 22 back to midfield. Duncan again fielded a Roe kick well, and a couple of phases saw Adegoke with space to break free. Hayley Nolan made the nice cover tackle to prevent the try, but Faget and Rom were in quick support, and the latter scored, 34-17.

There were still 15 minutes or so to play and Penn State made good use of the time. Play stayed mostly in Life’s end but the Running Eagles did well to turn over and clear the ball. Finally a penalty allowed Sophie Pyrz to quick tap to Canett, who sliced her way to beneath the posts, 34-24 with the Roe conversion.

On the final play of the game, forward captain Azniv Nalbandian took the ball from in close for the dive-over try. Roe converted, 34-31, and the final whistle sounded.


Lacy on Life as a Running Eagle