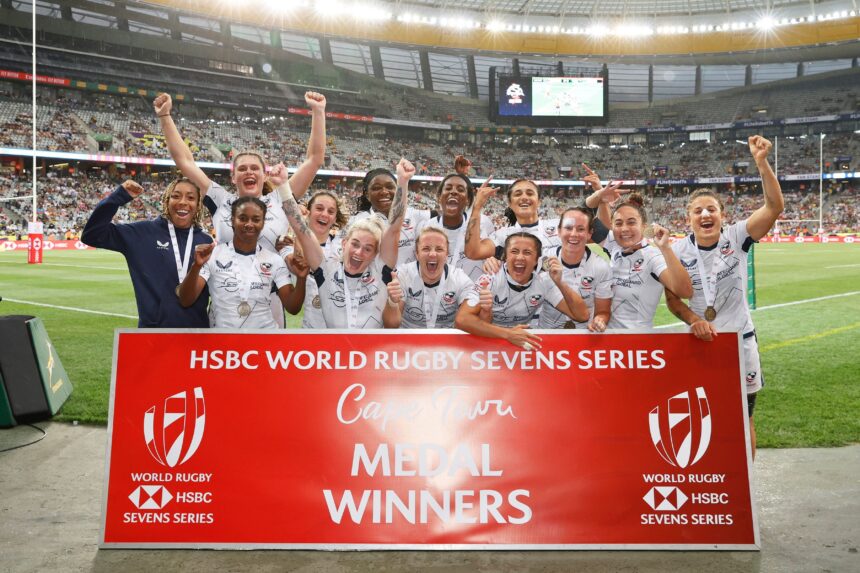 Head Coach Emilie Bydwell noted on early stages, “Pool stage was definitely a challenge and we very much needed to go a game at a time. Japan is a very well coached and skill team and they pushed us and will continue to improve with every tournament. We are happy with the Canadian performance especially with the impact that we had from our role players coming off the bench. The France game was disappointing and gave us some good lessons going into the knockout.”

The three-day tournament featured humid and rainy conditions conditions against the best in World Rugby, testing and proving the team’s ability to stay focused. Going into the holiday break ahead of New Zealand, the USA remain strong in the third place ranking, where the top four punch tickets to Paris by season’s end.

Day one for the USA opened with a 19-14 win over Japan. The hot midday match began with early pressure from Japan mid-field, who proved several times how dangerous they can be with the ball in hand. Despite some overshot passes while finding their footing, the USA found space to elude Japan with short passes and breakthroughs to earn three tries. Nicole Heavirland, who became the fourth USA Women’s Seven to play in 30 HSBC Sevens Series tournaments, established herself in the match with a textbook tackle that helped the USA regain possession in the second half. The game ended with a try for Japan, but the USA came away with their first win of the pool stage.

It was a battle of physicality against Canada in the USA’s second pool play match of the tournament. With a goal of overmatching effort, the Eagles did their best to stay physical and powerful. Canada’s missed tackles gave away a try for Naya Tapper early on, and while the USA had some trouble linking up, Kristi Kirshe was able to fend off Canada and skip out of tackles for another try. Jaz Gray came on in the second half with a look of determination, and her power and speed earned two more tries for the USA. Canada found some opportunity to get points on the board, but they were slow to react when in possession, giving the USA chances to take back the ball and come away with the win, 24-7.

Fatigue in the summer Cape Town sun was setting in for both the USA and France in their final Pool C match. After losing the bronze medal game in Dubai to the Eagles, France returned with determination to reverse the results. It was a very physical game from the start, and France’s grit showed in their defense. The USA struggled to gain ground in the first half, and a yellow card to Alena Olsen gave France an opportunity to score two tries while the Eagles were down one player. Alex “Spiff” Sedrick found some space to score a try for the USA, but the heat and pace of the game took a toll, and France came away with the win, 7-31.

Heading into the quarterfinals as number two in Pool C, the USA matched up with Fiji, who won the pair’s last matchup in Toulouse earlier this year. Both teams began with very physical play, and the USA held a good defensive line for most of the game. The Eagles executed some promising combination plays but couldn’t see them through until the second half, when Ilona Maher made it over the try line off a scrum. Fiji finally broke away for their first and only try, and Sammy Sullivan responded by finding space and diving over the try line after a solid carry from Jaz Gray to help the USA win 10-7, punching their ticket to the semifinals.

Bydwell added, “Very proud of the Fiji performance, the players followed the plan defensively, and fought really hard for each other. Australia we know we best ourselves and we know what we need to do to fix that, so looking forward to the next time we play them so we can continue to grow. Ireland is a very good side and they are United and passionate- we know we needed to match their energy and work for 14. We are particularly proud of the fact that we were able to regain momentum and control after the two quick tries early in the first half.”

In the semifinal, the USA met Australia, the World Champion powerhouse who headed into the match 5-0 in Cape Town, no team making a score against them all weekend. Coming off a 12-29 Australia win in Dubai last week, both teams are well-acquainted with each other, and the Eagles looked to benefit. Sullivan pushed hard against Australia’s defenses and ran along the left wing, putting the USA on the board. In only her second Sevens Series tournament, Sullivan is proving to be one of the more lethal speed threats on the outside. The Wallaroos proved to be physical, and the USA responded with their own physicality, including a big tackle from Sullivan. Cheta Emba proved the USA can control the ball at the start of the second half by displaying some great aerial skills and picking the ball out of the air against Australia’s pod, a patented play from Emba over the years. Maher also showed quick reaction ability by picking the ball from the breakdown to get another try for the USA. Australia proved lethal in the offense and won the game 33-12.

With the semifinal loss, the USA headed to their second bronze final of the 2023 Series, this time facing Ireland. Both teams were hungry for the medal and it showed in their physicality and determination to get points. A long defensive game complete with strength and patience paid off early, as Naya Tapper found the opportunity to steal the ball in a ruck and earn possession. The Eagles’ offense linked up really well, with relentless pressure to get through the green wall with solid phases. An offload from Kristi Kirshe to Sullivan gave the USA their first try, and Sullivan later stole a loose ball for a second one. Maher and Tapper each earned a try off great team play. Ireland found a few gaps to earn points, but the USA remained solid in completing their tackles and working together despite slippery conditions from the rainy weather.

Bydwell concluded following Cape Town, “Definitely tightened some areas on both attack and defense from Dubai which showed us great awareness and commitment from the players. We will have 10 training days after the break to zero in on a few details to get lined up for our next double tournament. We still have quite the challenge ahead, but looking forward to seeing us step up to meet what’s coming!”

The 12-20 win gave the USA their second bronze medal of the 2023 Series, an important achievement to get them one step closer to 2024 Olympic qualification. Looking ahead, the women will return to Chula Vista to study and improve their skills in preparation for the third Series stop in Hamilton, New Zealand, January 21-22, 2023.