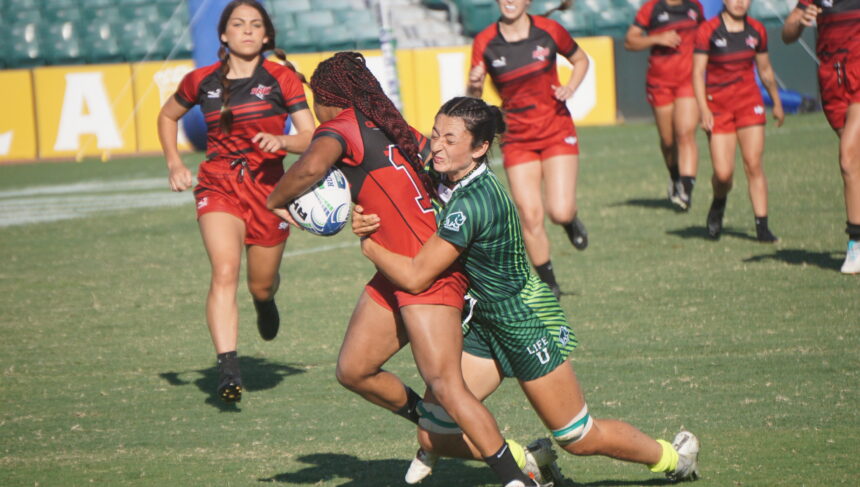 May Madness 7s is underway at Shrine on Airline in New Orleans, and the 16-team Women’s Premier Division has completed its first round inside the stadium. The losing teams route to the consolation brackets, and the quarterfinals will begin at 10:56 a.m. CT inside the stadium and live on The Rugby Network

Check in with DI Premier brackets as they update live.

The 16 teams are divided into East and West brackets (and have nothing to do with a team’s home location) with eight teams apiece. The West #1 team, Life University, kicked off the tournament at 8 a.m. and defeated Southern Nazarene, a new program out of Oklahoma, 52-0. No. 4 UC Davis and No. 5 Notre Dame followed and provided the competitive match that one would expect from the middle of the bracket.

“Honestly, it’s such a rush; it’s such an honor to be here,” UC Davis senior co-captain Olly Gomez said of being at the CRCs. “I feel really lucky that all of our work that we’ve put in the last year has come to show right here and right now and I hope it keeps going.”

“I feel like we’ve worked hard, probably harder than other teams to recover from Covid,” fellow senior co-captain Sydney Strupp said of being at a national tournament. “We don’t have a lot of funding. We had to crowd-source everything. So it’s nice when the underdogs – if you can say that – come out and get to have a big win.”

Raptor Rights Itself in Time for Tennessee HS Final