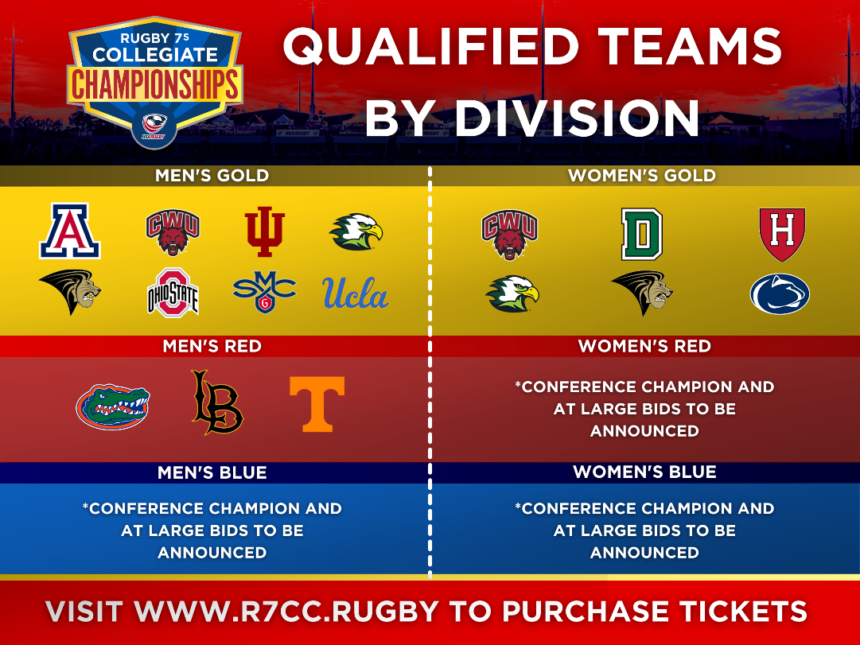 R7CC PRESS RELEASE – The premier domestic event of the rugby season, USA Rugby 7s Collegiate Championships (R7CC), will take place at Kennesaw State University’s Fifth Third Bank Stadium from May 14-15, 2022. R7CC is the official national championship tournament for both men’s and women’s collegiate 7s and will be broadcast live on NBC, CNBC, and Peacock.

The tournament will include over 60 teams across three division tiers. Men’s teams will be broken into Gold (D1A), Red (D1 Club), and Blue (D2) divisions while women’s teams will compete in Gold (D1 Elite and NIRA), Red (D1), and Blue (D2). With the completion of recent qualifier tournaments, event organizers are excited to announce the first group of confirmed teams across the men’s and women’s divisions. The subsequent rounds of competing teams will be announced over the next several weeks as regional and conference qualifiers are completed.

Tickets for the USA Rugby 7s Collegiate Championships are on sale now. 2-day passes start at $49 for adults and $25 for children. Single day tickets start at $35 for adults and $18 for children. Groups of 10 or more can buy tickets at a discounted rate of $22 per day for adult, $12 per day for children, and will enjoy exclusive fan experience opportunities. Presale ticket prices are valid through March 31, 2022. Ticket prices will increase on April 1, 2022.