Dragons Save Best Performance for Last 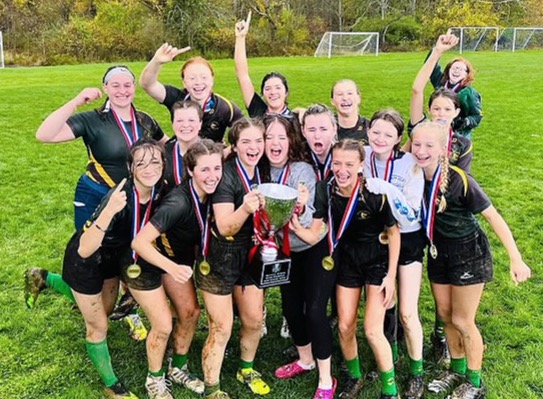 Doylestown has been the team to beat in the Rugby PA Fall 7s Championship season, but 2021 was different. The Dragons had graduated some incredible talent who didn’t just leave vacancies on the roster but also in the team’s self-esteem. Doylestown used the entire season to build skill, chemistry and confidence, and it all came together in the final game of the fall.

Stacy Mancuso is the long-time head coach for Doylestown and she’s welcomed the support of Shane Flynn this year. Flynn had played quality ball with Kutztown University and Penn State and continued into senior club rugby until injury. He then transitioned to coaching and worked with the Ursinus and Princeton men’s teams before focusing on family pursuits. When the kids were old enough to play flag rugby, he co-founded the Yardley Makefield Rookie Rugby Club. That’s where daughter Nolah, now an 8th grader, learned the game, and when she aged out of Rookie Rugby, she realigned with Doylestown. Dad was now spending two hours at Dragons practices, so he offered his support to the coaching staff.

“We hit the jackpot with Shane,” Mancuso enthused.

Last fall, Rugby Pennsylvania held a one-day 7s tournament that served as a championship and an abbreviated spring 15s season. Doylestown won both titles with a team that featured USA U18 players Nina Mason and Sophia Linder, who are now freshmen at DI Elite’s Life University and DI NIRA’s Army West Point, respectively. They were two of five seniors who graduated last spring.

“We didn’t just lose five players. Nina and Sophia were All-Americans, and the other three were really talented, too,” said Flynn, who noted some additional absences unrelated to graduation. “This team knew they lost really great players and it became more about: How does this group come together and develop new leaders and build confidence in themselves? How do we put the team together so that we can accomplish the goals we set out for the season?” 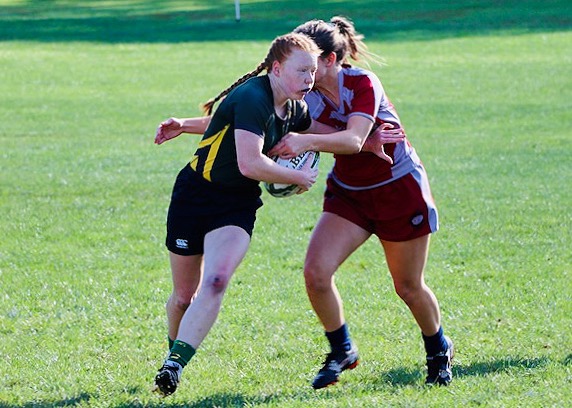 “It was always looking like a rebuilding year, and it really took up until this final weekend for it to all come together,” Mancuso said. “They weren’t winning the whole season, and that was tough for them. This team hadn’t experienced many losses, and we asked the players for a lot of trust, that all this hard work would pay off in the end.”

Prior to the six-stop Rugby PA series, teams from the Mid-Atlantic region participated in the Atlantis Showcase.

“Stacy wasn’t there for the first match and she was getting calls from the girls that it was not looking like a good season,” Flynn said. “It was a constant reiterating that our goals were to position ourselves well for states. Trust that each week we’ll build, and the confidence will come. We added some new players and put people in different positions, and were figuring all that out. So I’m not sure they really believed us until the end.”

The Dragons invested in defense. Mancuso estimated that for every two hours of practice, an hour-and-a-half was spent on defensive structures, how to launch off the line, etc.

“We knew the tries would come because we have talented players who can score,” Flynn said. “It was the defense and ultimately the execution that was needed in order to win games.” 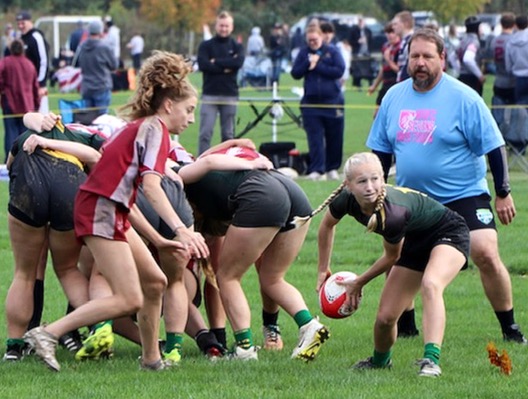 Senior Liz Johnston was the example-setter on defense and an effective weapon in turning over possession. On attack, junior Maddie Doyle set the tone. The team’s leading try-scorer isn’t big but a crafty, powerful runner who is hard to take down. Given a little space, Doyle can get through it.

Doylestown played in five of the six Rugby PA tournaments, produced a 9-5 record, and finished second in the series standings. Throughout the fall, young talent emerged.

“Nolah is only 13 years old and our scrumhalf. She’s also our kicker so she brings a lot of different things to the table,” Mancuso lauded the 8th grader. “She’s a natural athlete but her rugby IQ has grown immensely over the last 6-8 months. She plays tight on the other scrumhalf, makes her tackles, puts pressure on and her kicks are usually spot-on. She’s just so level-headed and really coachable, and I’m really excited to see where she goes.”

Knightmare finished the tournament series with a 13-1 record (read more) and took the top seed into the championship tournament, which was held Oct. 31 in Malvern, Pa. Six teams competed and were split into two groups for pool play. Doylestown opened with a 31-5 win against Conestoga and then beat Downingtown 33-5 for the semifinals berth against West Pitt.

The Foxes took a 14-0 halftime lead as Viv Funkhouser set up Callie Rautenbach for a try, and then Alyssa Lerch dotted down a team score. Alayshja Bable converted both tries.

“It didn’t look good at halftime. They were just lacking energy,” Mancuso said of the semifinal. “We went out there and said, ‘We know how you can play. We’ve seen it in practice. We need to flip a switch, or we go home.’ That’s a big goal to accomplish – three tries in seven minutes – but we had confidence in them. And they did it. The second half was a lot different.”

The Dragons exceeded the ask and put down four unanswered tries for the 22-14 win.

“It was crucial,” Flynn said of the comeback win. “The defensive execution wasn’t there in the first half, but from that point forward, they didn’t let up a single point. That is when they knew they could trust themselves. That defensive mindset was the shift. They were the aggressors who put the other team on the back foot and under pressure. And we knew the tries would follow.”

On the other side of the bracket, Knightmare bettered West Pitt 27-7 and then beat Hollidaysburg in back-to-back games to advance to the final. 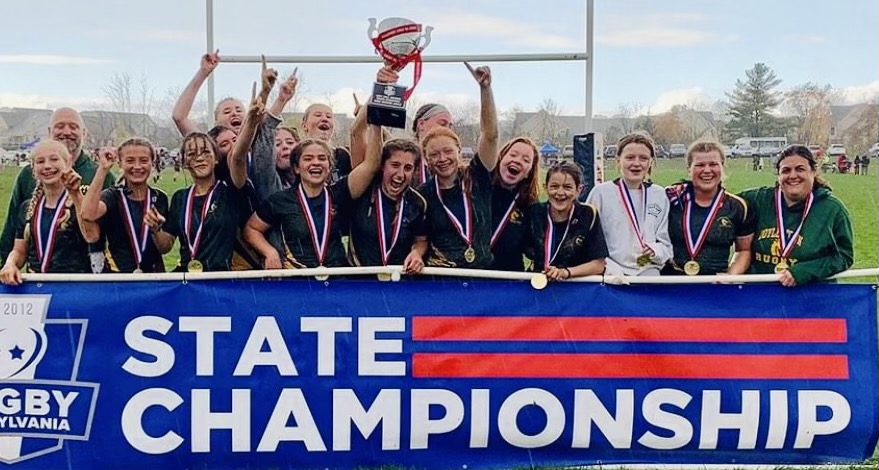 “That shift was still going into the final game,” Mancuso said of momentum. “They lost to this Knightmare team all season, but they weren’t thinking about those games and just needed to win this one time.”

The team’s confidence bloomed, and then a quick try from the kickoff put Doylestown into great headspace.

“I don’t know if they were caught off-guard, but to be fair, they were missing one of their impact players who got injured in the semifinal, so I’m not sure if their mental game was off a bit,” Mancuso said of Knightmare. “But they had nearly clean-swept the entire season, so they were not used to getting scored on.”

“When you’re winning all season, you spend most of your time on the front foot and putting on t
he pressure,” Flynn added. “That’s what you’re used to, and not that defensive pressure that gets you going backward a lot. They just didn’t have the space to move and weren’t able to recover.”

Doylestown scored four tries in the shutout win and ended its season with a Rugby PA Fall 7s Championship.

“My experience is limited to the past two years, but last year’s team knew they were the best,” Flynn reflected on the significance of this win. “It would have been a shock if [last year’s team] hadn’t won something, and it’s a shame that they didn’t have all the opportunities they could have had because of Covid. This year’s team didn’t have that confidence. If they had lost in the final, they would have said it was a great season anyway. But they overcame all that and played their best at the end. That was definitely something they felt really proud of. Now they can appreciate the hard work, all the building the last few months, and trust themselves now. They had to work hard to get where they wanted to be, so it was a different journey.”

“We didn’t have 2-3 standout players,” Mancuso added. “You couldn’t say one player did any more than another one. If anyone broke down in the final, we wouldn’t have won. It was more of a collective effort. We weren’t dominating the whole season, so it was neat to see everything they worked for in practice come alive and the mental transformation come, too.”

Doylestown has closed on its rugby activity for 2021, but players and staff will feature at the New York 7s on Thanksgiving weekend. Mancuso is coaching an Atlantis side and bringing some players with her to Randall’s Island. There are also Dragons on the Rugby PA All-Star and ARPTC 7s squads competing at the Big Apple tournament. Then 15s awaits in the spring.

“They need to give themselves more credit and trust their training going forward,” Mancuso spoke to the hopeful implications of this year’s title run. “If you do that and put in the work, whether you win or not, the result will satisfy you. They need to believe in themselves and their teammates, and now that final game is proof. Hopefully they can use that going forward and get excited about next season and still come out with fire.”