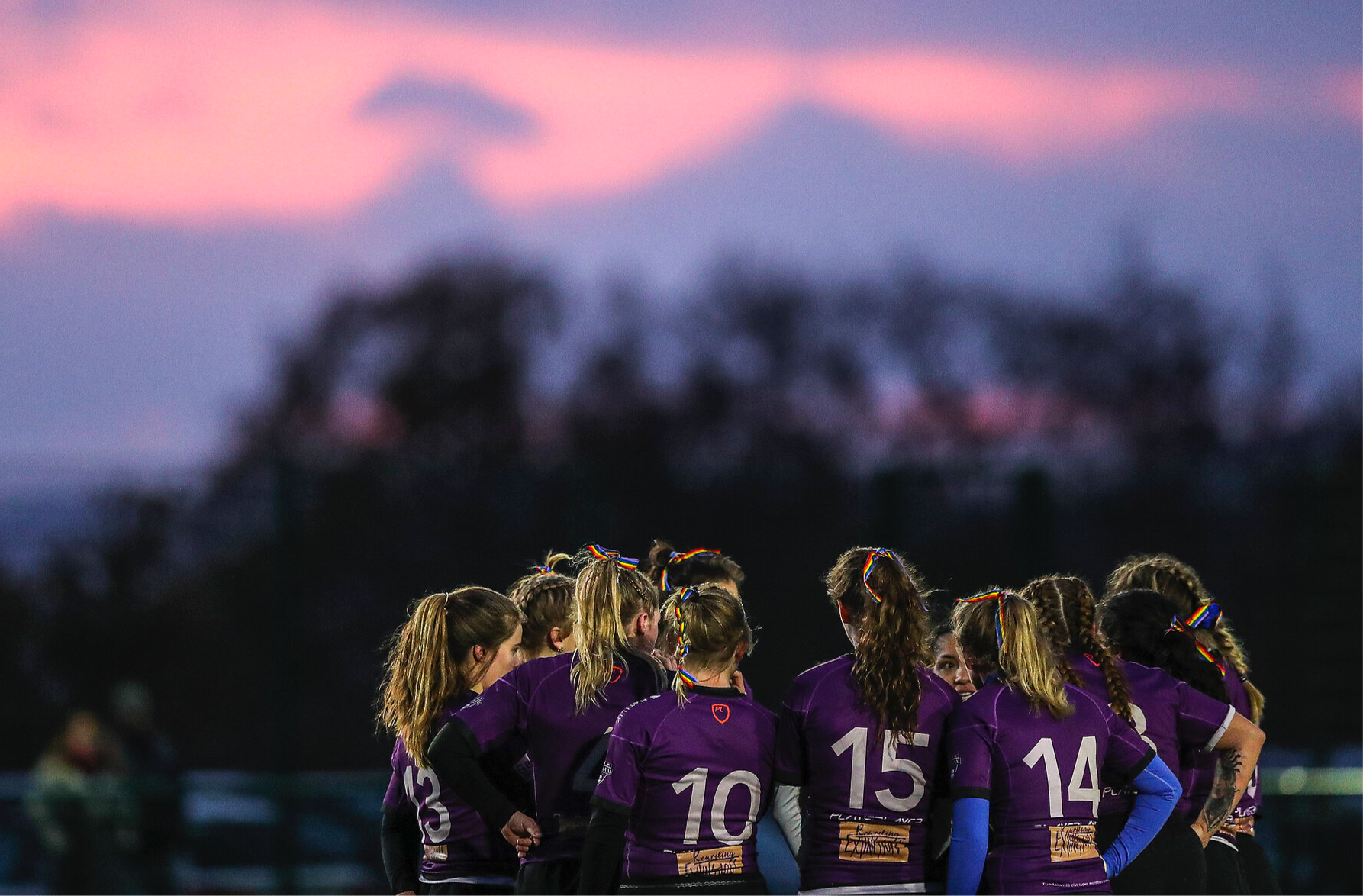 There’s a substantial contingent of Eagles who are competing in the Allianz Premier 15s, the English professional league, but there’s also a solid group of Americans who have signed with Durham University. Five U.S. players were recruited and received scholarships to both play for the rugby program while also pursuing master’s degrees. At present, Durham leads the Women’s National League, the top tier of British Universities & Colleges Sport (BUCS).

Durham fields the largest university women’s rugby program in the U.K., fielding three separate teams in BUCS competitions. It’s partnered with the DMP Durham Sharks, and students that qualify can simultaneously compete in the Premier and university leagues. But when Lauren Ebeling was approached with an opportunity to play and study abroad, the Chicago and ARPTC stalwart was oblivious to Durham’s accolades.

“The first time I heard of Durham was through Sophie [Pyrz],” Ebeling said of the long-time ARPTC teammate. “She was originally recruited to go to Durham before Covid, and right after fall [2020] residency at ARPTC, the coach [Simon Culley] expressed that he was looking for a couple of backs and if Sophie knew anyone who might meet those criteria.”

Ebeling made the recommendation list and talks about an overseas collaboration began in January 2021.

“I didn’t have to be convinced, per se, but going back to school is definitely something you have to be in the mindset to do,” said 29-year-old Ebeling, who holds a master’s in public health. “So that was my only hesitation: I have this incredible rugby opportunity but it also has a school aspect to it. But it wasn’t much [of a hesitation], because I feel like education is never lost, so I didn’t consider it a down-side. But I was really looking to play in a structured, well run program.

“To play international rugby is obviously great,” Ebeling continued, “but another selling point was [Culley] ensured us that if we want to play on contract after leaving Durham – in Spain or France or to New Zealand or wherever – he has a lot of connections to help place us there as well.” 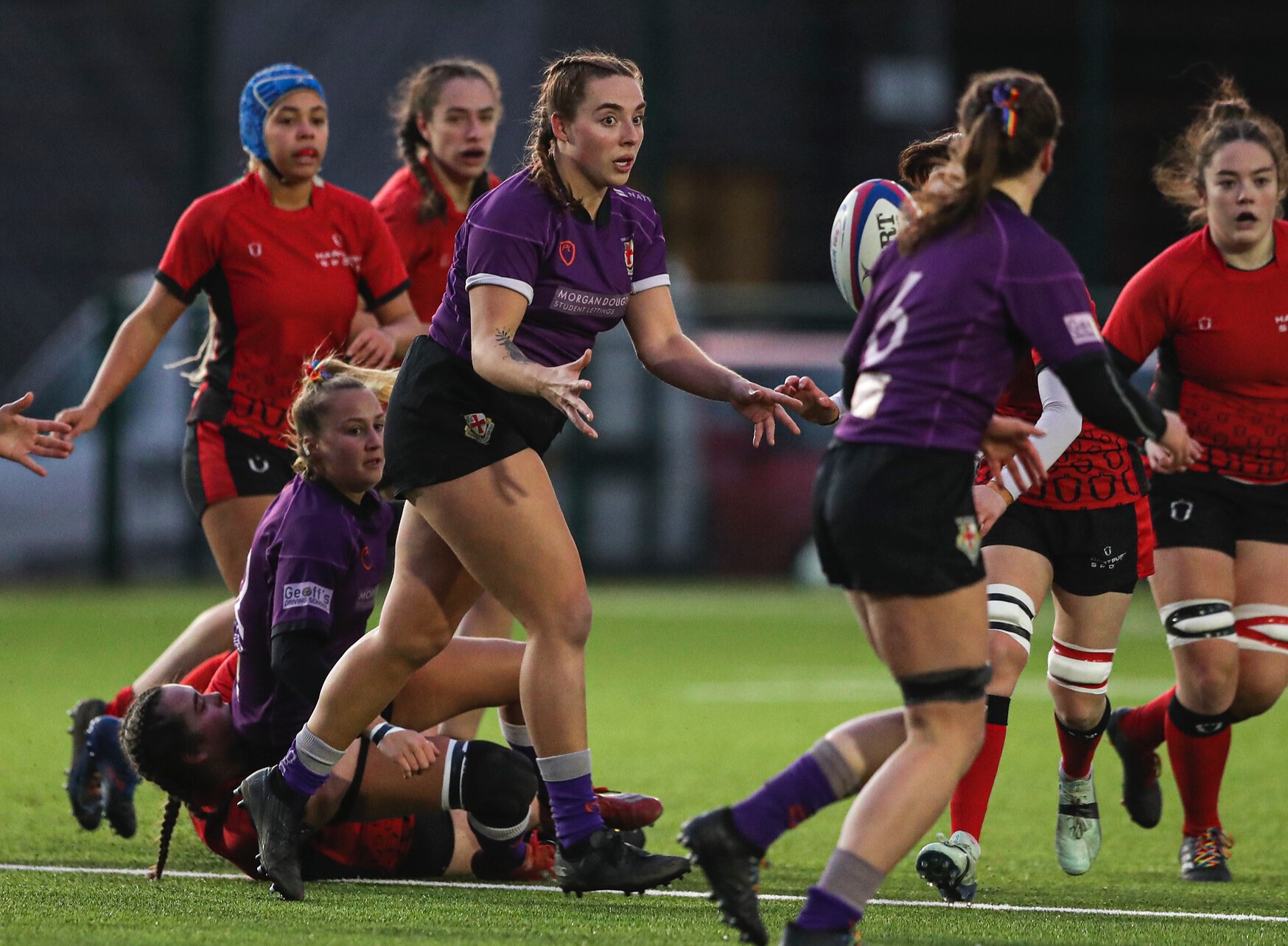 Ebeling decided on a one-year sociology master’s program, and then it took approximately six months to sort out the school application, scholarship, housing, visa, etc. Ebeling departed for England in early September 2021 along with Sarah Berry (Chicago Lions), Alli Hale (ARPTC, Colorado Gray Wolves), Bianca Ortiz-Pallen (Life West) and Allie Schrenker (Colorado Gray Wolves), who were all recruited as scholarship athletes and graduate students. All five are known and notable players in the WPL and/or elite 7s circuit.

“When I was first getting recruited I was under the impression that all the players were recruited and put on scholarships, but it’s actually just the international post-grad athletes,” Ebeling explained. “The rest of the team kind of decides they’ll play rugby once they come here, because the university itself – which I didn’t know – is one of the top schools in the country. It’s like Oxford, Cambridge, Durham. So a lot of the girls who are on the team are there for academics and rugby is their bonus. Whereas there is a group of us who went for rugby.”

That means there is a wide range of experience, from the 18-year-olds straight out of college (the equivalent of high school in the U.S.), to veterans like Ebeling, who have lots of playing and traveling exposure. There are also players from Hong Kong, France, Spain and Sweden.

“Durham University brings in a decent amount of international scholarship athletes from all the sports, so it’s a cool little environment we have because most of us live in the same building, too,” Ebeling said.

A four-week pre-season began on Sept. 9, and the team trained four times per week. In season, twice-per-week training sessions continued on the turf pitches and are supplemented by two team lifts per week in the rugby-only gym. The S&C coach designed forward- and back-specific conditioning programs, and those units meet once per week. Games occur on Wednesdays and the team travels in its coach bus to away games. There’s access to the massage therapist, physio, three rugby coaches and very nice facilities – per Ebeling.

Durham began its BUCS Women’s National League season on Oct. 6 against Cardiff Met and all five Americans started. Ortiz-Pallen scored two tries and Berry added five points in the 46-0 win. Culley originally recruited Ebeling as an outside center but then saw the ARPTC player at 7s nationals, and at the first practice repositioned Ebeling at flyhalf. 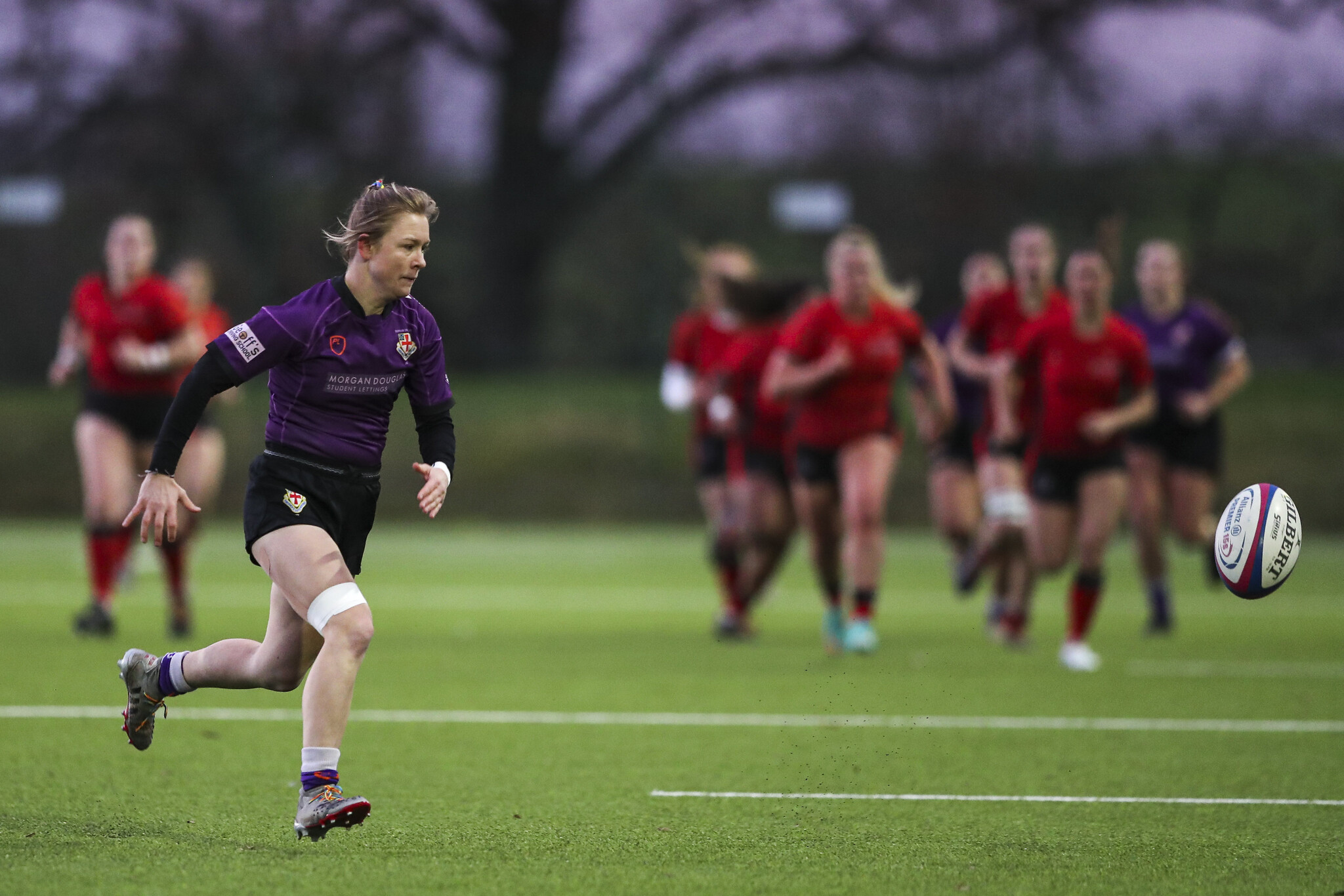 “It’s definitely been difficult,” Ebeling said of the learning curve. “We have film analysis, which has been really helpful, so every week I’m looking at my tape – what can I do differently? How can I make this play more effective off set piece? For me specifically I’ve really been trying to find a balance between my running game and my passing game, which I feel like as a flyhalf you kind of have to nail that down.”

High-level coaching and resources have aided the transition to flyhalf, as well as the freedom to focus on just playing. Ebeling is accustomed to holding some sort of leadership position on teams and is now relishing the opportunity to focus on learning and growing.

In week two, Durham dropped its only match of the fall: 7-10 to Loughborough.

“What I find really cool is some of the teams we play are university programs that are tied to Prem teams here in England,” Ebeling said. “So when we play teams like Loughborough and Hartpury, you see some crossovers for some of the girls who have dual eligibility to play in our league and the Prem. So those games are really challenging and it’s really good rugby. We play teams in Wales and Scotland as well, and the team in Scotland especially has brought on some really incredible competition.”

Both the Hartpury and Edinburgh games were tight, but Durham won both: 25-19 and 22-19, respectively. In between, Durham shut out Northumbria 74-0, and Ebeling, Schrenker and Ortiz-Pallen (2) all scored.

“The contact area I feel is so different, and maybe it’s because I’m a back and I don’t get into it as often,” Ebeling contrasted U.S. and English rugby. “And just a lot of play-what you-see; whereas in the States, I feel we play very structured. ‘We’re going to do this, this and this, and if that doesn’t happen, then it’s x, y and z.’ Here, we’re getting more of the experience to play what opens up in front of us, which has been really nice because for me it translates a lot to my 7s experience.” 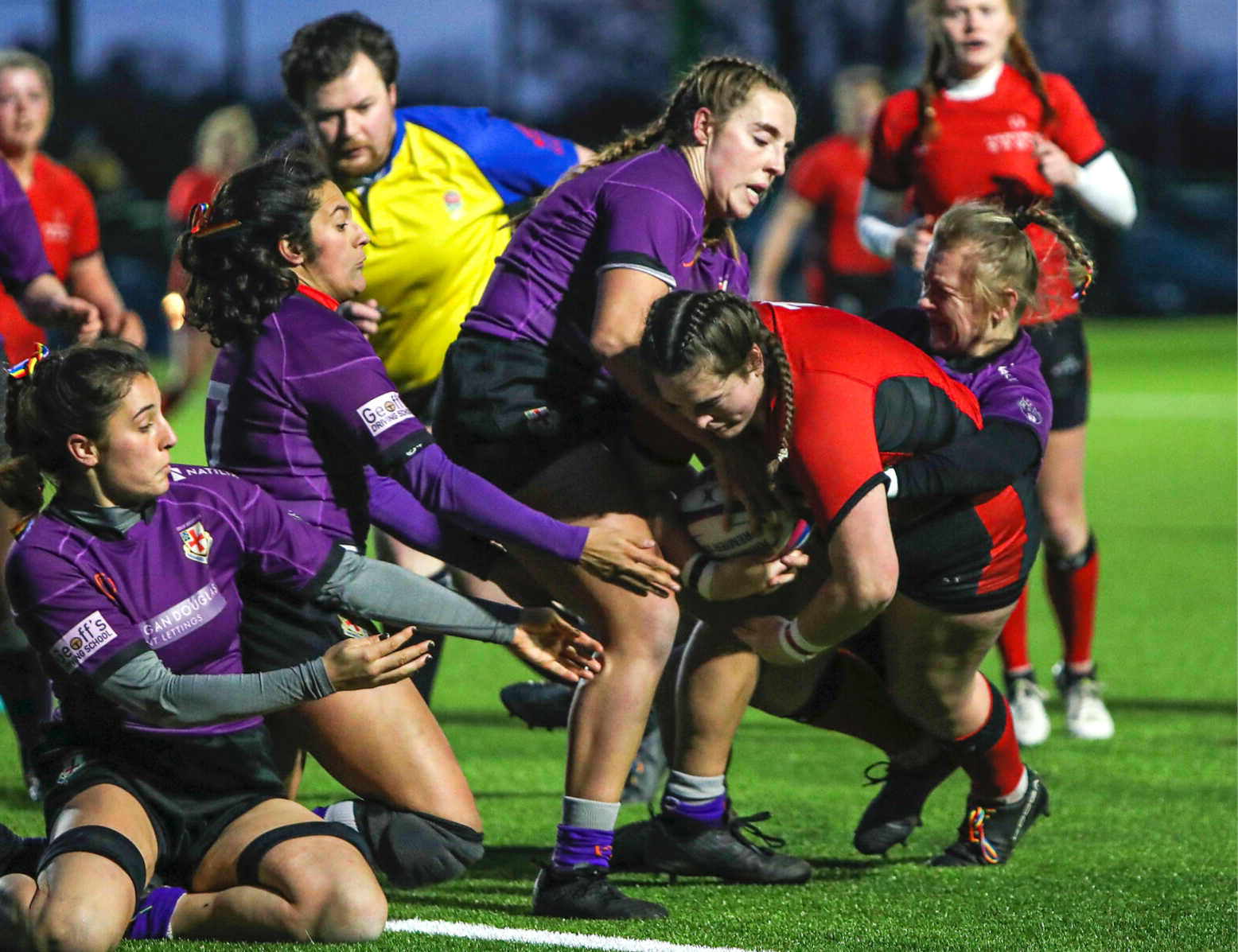 In the final game o
f the fall, Durham repeated its win against Hartpury and by a larger margin, 31-14. That result put the team atop the standings and with a three-point lead.

“That game was actually live-streamed by our BUCS league and I got selected as Player of the Game because I finally figured it out,” Ebeling said of transitioning to flyhalf. “It’s taken me six games but I really found that balance. It was a really cool moment for me because I feel like I’ve been struggling to find that here, because I’m just much more comfortable at 13. It was a nice way to end our season and I’m excited for the second half of the season.”

Pre-season will start this Monday, and then league games will fill February. Playoffs follow and then the national championship will be played inside Twickenham on April 27.

“We’re all really enjoying it,” Ebeling spoke for the Americans. “We went to Ireland and reflected on the first half of the season, and I think everyone is really happy. It’s been nice to have each other.

“We all come from very similar backgrounds in the States,” Ebeling continued. “Three of us play for ARPTC so we’re used to a full-time environment with high standards. And we’ve been able to bring that experience and that knowledge on to this younger team, where the girls are incredibly talented. They grow up playing the game and have such raw talent but not necessarily the experience of playing in a high-level environment, so we’ve been able to bring that in and act as mentors in some ways. It’s been cool to see the girls adopt it. … We all have the same goal: We all want to make it to Twickenham on April 27. So it was, ‘Let’s adopt some of these habits and foster that within the program.’”

Even though the schedule is pretty demanding with rugby and school, the games take players to new cities and there’s gaps in the calendar for extended travel into Europe. Ebeling spent the break with family on the road, and was planning on a spring break trip – which might not be possible if Durham qualifies for the national final. There’s a short 7s season after 15s, and then Ebeling will wrap up school and rugby in June. 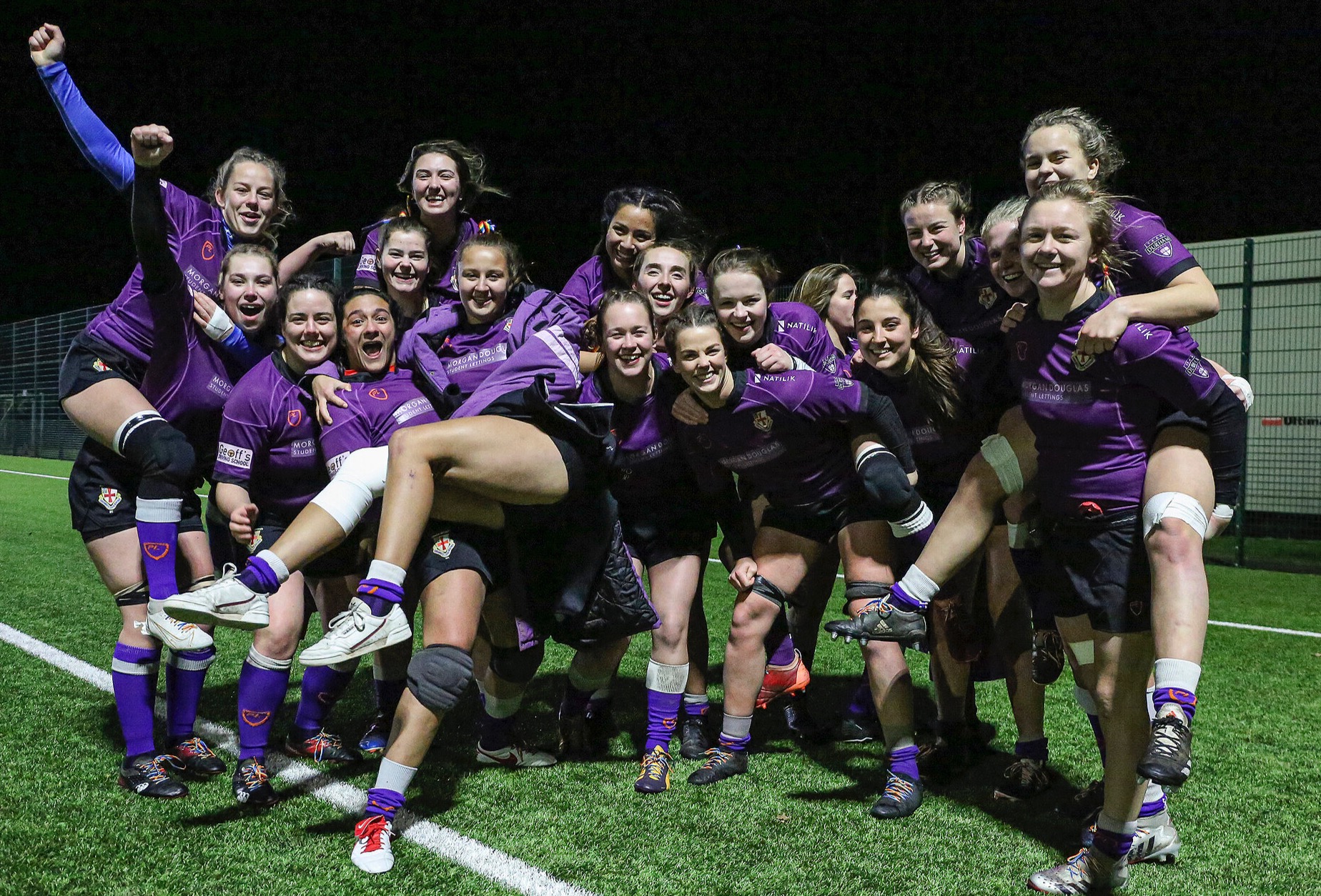 “My visa is good until January 2023,” Ebeling looked ahead. “If I want to stay and travel, or see if there’s a team to play on here, or something opens up through Durham or the connections through my coach to play on a contract somewhere, maybe I’ll move for that. Really I’m just letting it happen, because I feel things have been changing so rapidly everywhere that it’s hard to plan too far ahead.”

As for the future of Durham and American student-athletes, Ebeling is confident that that relationship will continue.

“Culley has recently taken over the program, so he’s got this vision and is interested – especially after seeing our class of Americans come over – in continuing this,” Ebeling closed. “He’s asked for our help, if we want to refer anyone from the States.

“It’s definitely for a certain type of player,” Ebeling qualified a recommendation. “If you want to get a master’s or have some other degree and play good rugby, then this is a really good opportunity for you. You’re scholarship-ed, you’re playing in England, you’re being exposed to high-level rugby, and you have a structured program to do so. The other side of the coin, if you only want the rugby experience, maybe look elsewhere, just because you still do have to do school. You have to be a student and take part in classes and you might not be getting everything you want if you’re there purely for the rugby.”