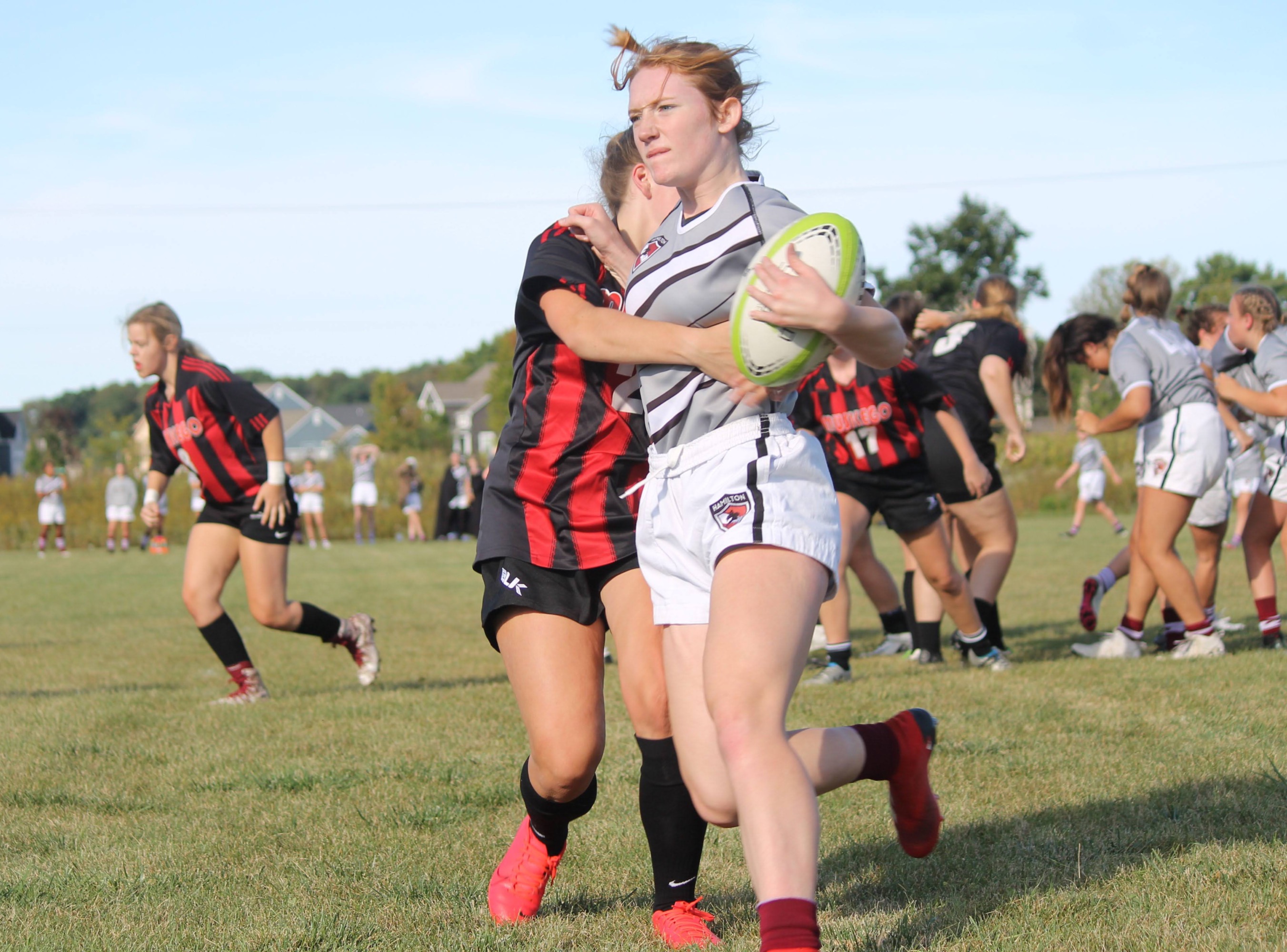 Divine Savior Holy Angel (DSHA) and Catholic Memorial are so dominant in Wisconsin and the Midwest, and they’re always national title contenders, if not winners in the Dashers’ case. So it’s newsworthy when they play close games against someone other than each other. This fall, the 2021 Wisconsin finalists didn’t have to look outside of the state border for additional competition, as Hamilton led both teams in a regular- and post-season game before dropping single-digit decisions.

Current Wisconsin Girls Rugby (WGR) President Barry Holloway created Hamilton RFC in spring 2017, and its programming reaches down to middle school. When Hamilton added spring 7s for the high schoolers, Holloway, a former UW Whitewater coach, hired two of his former collegiate players in Katie McNeil and Amanda Huber. He wanted more women on staff, and the players gravitated toward them. 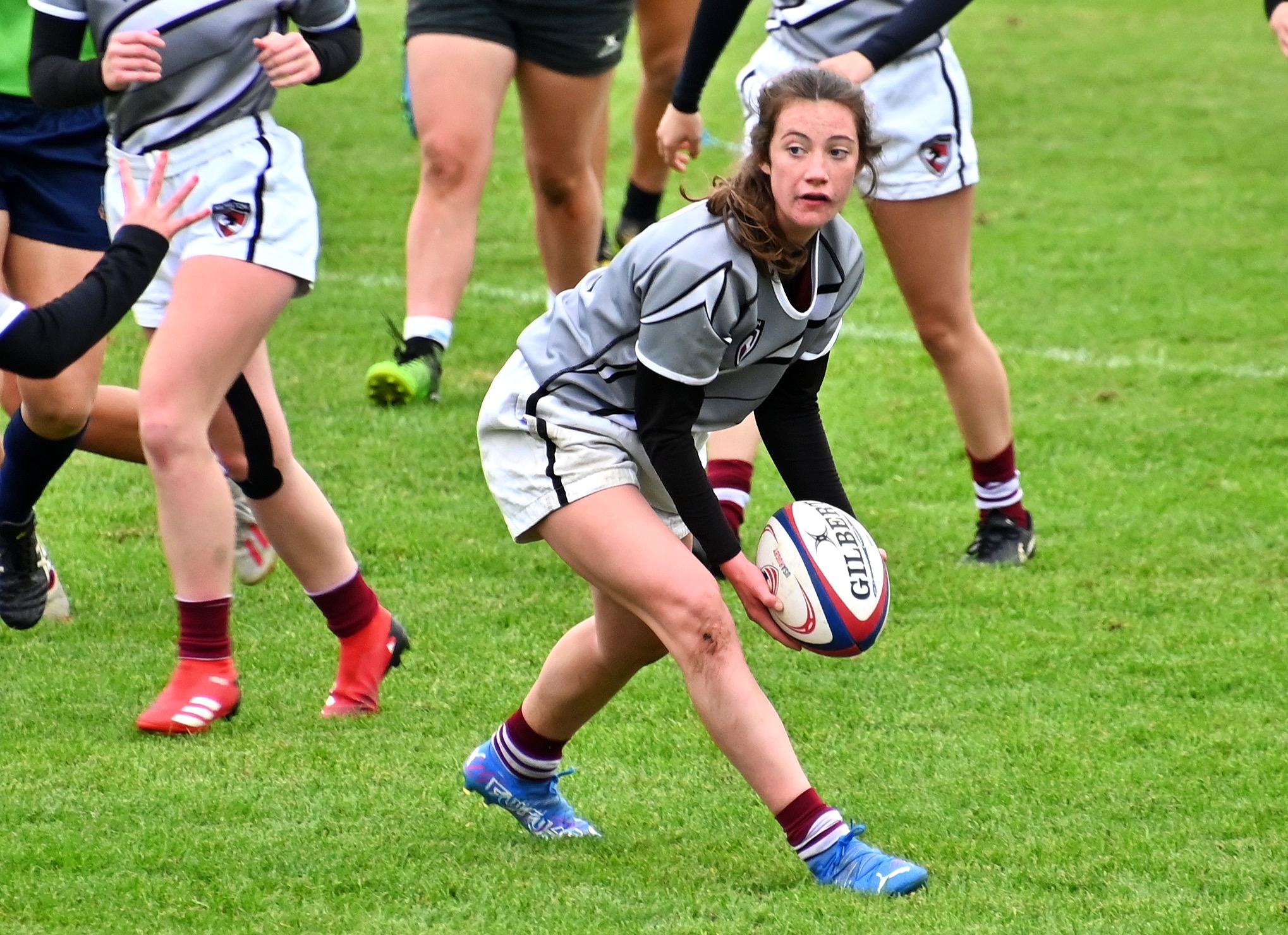 That first 7s season, Hamilton won both the DI and DII state titles. The caveat, of course, is that DSHA and Catholic Memorial play 15s for the majority of the spring as they prepare for Midwests and nationals, but their absence helped the young team establish themselves and gain more experience.

“One hundred percent, 7s definitely helped,” Holloway said of the team’s trajectory. “Early on, beyond the fact that the team just didn’t know rugby, the rucking wasn’t great, the ball movement wasn’t very good. But having the girls play in all that space in 7s, they learned how to move and find space, which you don’t otherwise get to do in 15s. So 7s got them thinking about that.

“It also helped us close a gap,” he continued. “This last [spring], our DI side almost went undefeated in 7s, and that expedited our growth as well. Catholic Memorial and DSHA weren’t playing 7s and they had trouble finding friends to play 15s with. We were moving that whole season and able to upgrade a bit.” 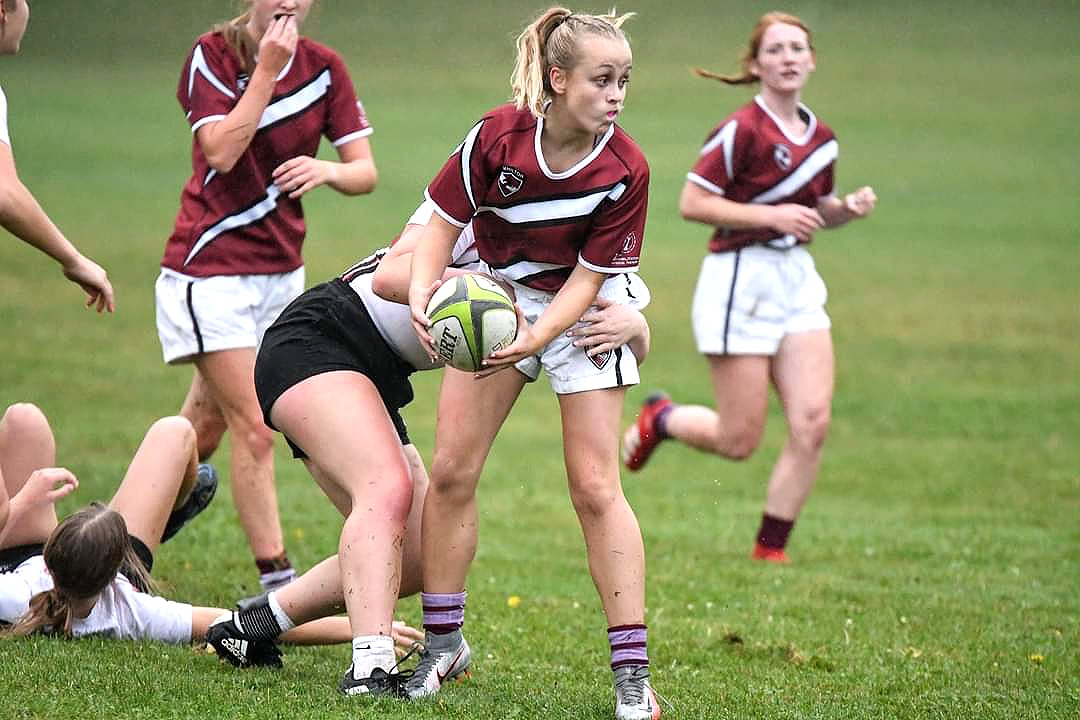 The summer saw the staff shift in their roles. Holloway stepped back a bit to focus on family and grad school, and McNeil took over as general manager and head coach of the 7s and 15s programs. The student leadership also altered. Hannah Pfersch, now a sophomore at Quinnipiac University, had been a captain since the team began, and Hamilton needed new voices. (Read this fantastic piece on Hamilton’s leadership.)

“Hannah had done so much for our club on and off the field, and held that sole leadership role,” McNeil said. “With her departure, we had to share the many tasks that she had otherwise completed by herself. Last spring, we did what we called a ‘leadership academy,’ where players volunteered into these roles and we gave them certain activities through the season. We saw them in action and vetted potential captains through that.”

Seniors Savannah Landphier and Ayana Phelps emerged and serve as the main captains, and they represent the first true class of players that will graduate with a full four years at Hamilton, per Holloway. McNeil sees the seniors as crucial to driving a team-first culture and making sure the team is united on the pitch. Grace Farrell and Meghan Rank are also part of the leadership group and are banking lessons for the future. They represent the junior class, which includes players who have been together since middle school tag. Their game understanding was already baked in when they joined the starting line. 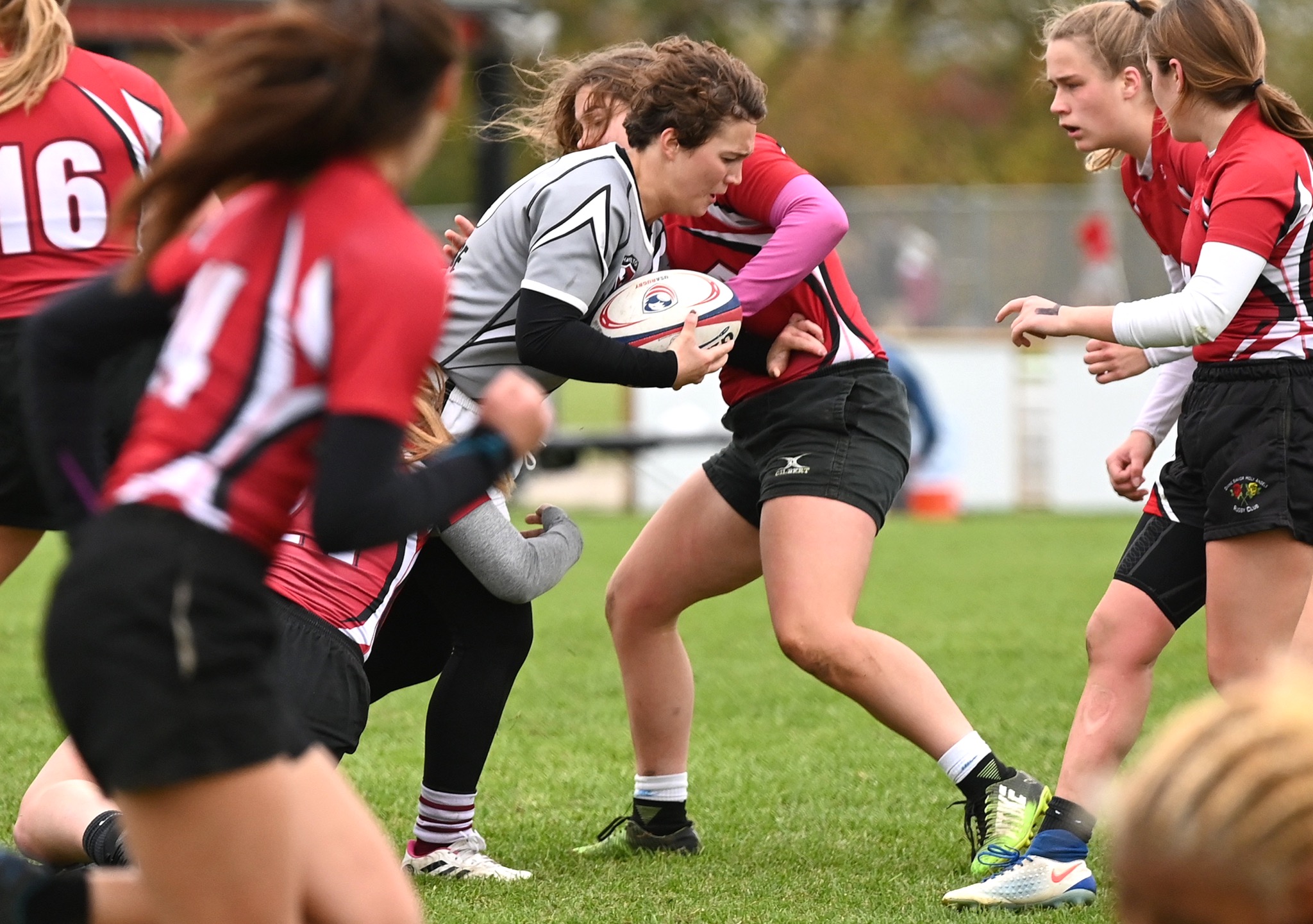 “Meghan is our flyhalf, and her twin sister, Rachel, is our number eight,” McNeil said. “They both play leadership roles on the field and set the tone for intensity. Rachel has been a back but bringing her into the pack has brought more hands and speed to the forwards. Grace has also been a real driving force and is a great communicator. She’s a utility player and will play at flanker or inside center.”

McNeil indicated that there was a sense of something building for the fall, and the team confirmed suspicions with a 59-10 win against Stevens Point and then 71-0 victory against Muskego. Hamilton then readied for DSHA’s B side on Oct. 7.

“Any time you hear ‘DSHA,’ you get nervous,” McNeil said. “It was a Thursday game, so it was after school. It was rainy, so energy levels were a little low. But they put in the team effort that we needed and won 36-0. That was the moment we thought: O.K., we can compete.” 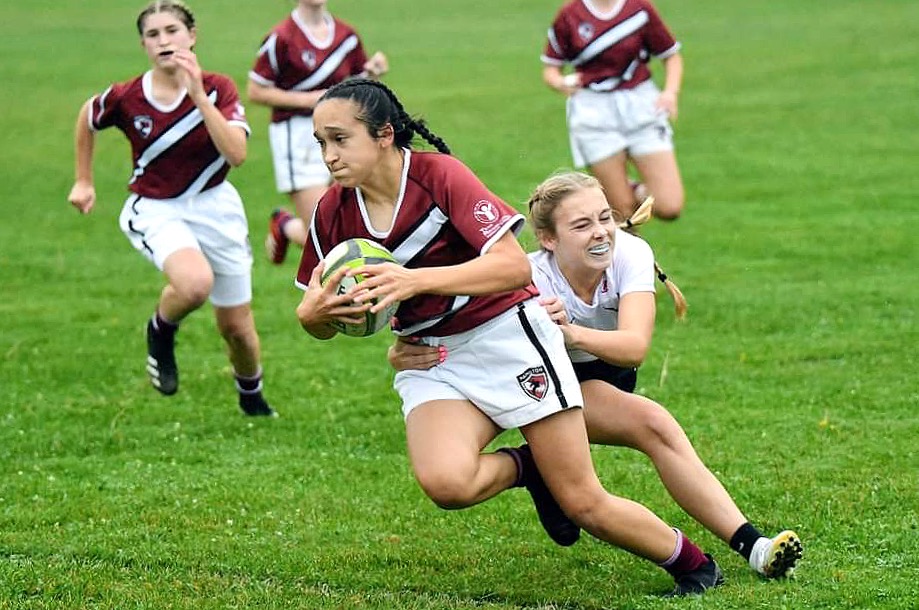 A bye week followed and then Hamilton’s regular season ended with an Oct. 16 match against Catholic Memorial.

“We led the whole game, by as much as two tries in the second half,” Holloway recounted. “But you could see, when CMH scored, it took the wind out of our sails and we slowly lost the game. Then we had the ball on the last play, and unfortunately the field was lined for football and one player thought she scored the game-winning try, but she was early. We frantically tried to recollect the ball but we knocked on. We were a couple of meters from beating CMH. … Our seniors, they never really cry, even at the end of the season. But the whole team was in tears. That was a tough loss.”

Once the heartbreak eased, a new confidence emerged.

“We had always told them that they could beat them, but they didn’t believe us in their heart of hearts,” Holloway said. “They played nervous and tight against CMH, but they came out of that game thinking they could take on the world.” 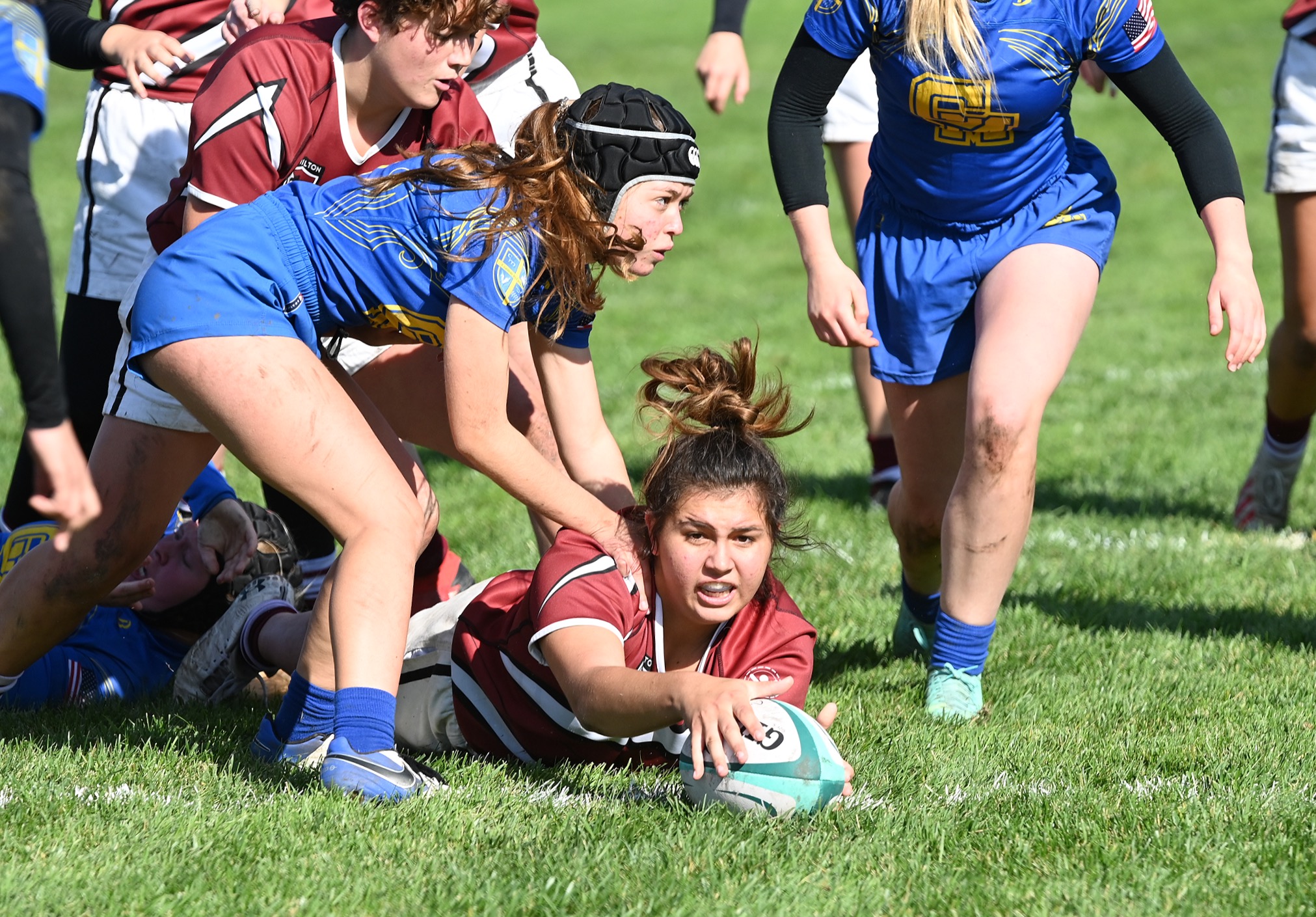 Had Hamilton won, then it would have played Green Bay in the state semifinals. Instead, the Crusaders won that matchup 67-0, and Hamilton faced DSHA in last weekend’s playoffs.

“Up until Sunday, we had never scored against DSHA, so any result would have been great,” Holloway set up the semifinal. “DSHA scored first and I thought that was going to rattle them, but they regrouped and scored two tries of their own. Our ref thought our halves were 35 minutes so the first half went longer than it was supposed to, and DSHA scored to close the gap. In the second half, they slowly pulled ahead to win, but beating DSHA was well beyond our expectations coming into the season.”

Both Holloway and McNeil noted that a DSHA senior said this semifinal marked the best competition she’d faced in four years wit
h the Dashers. 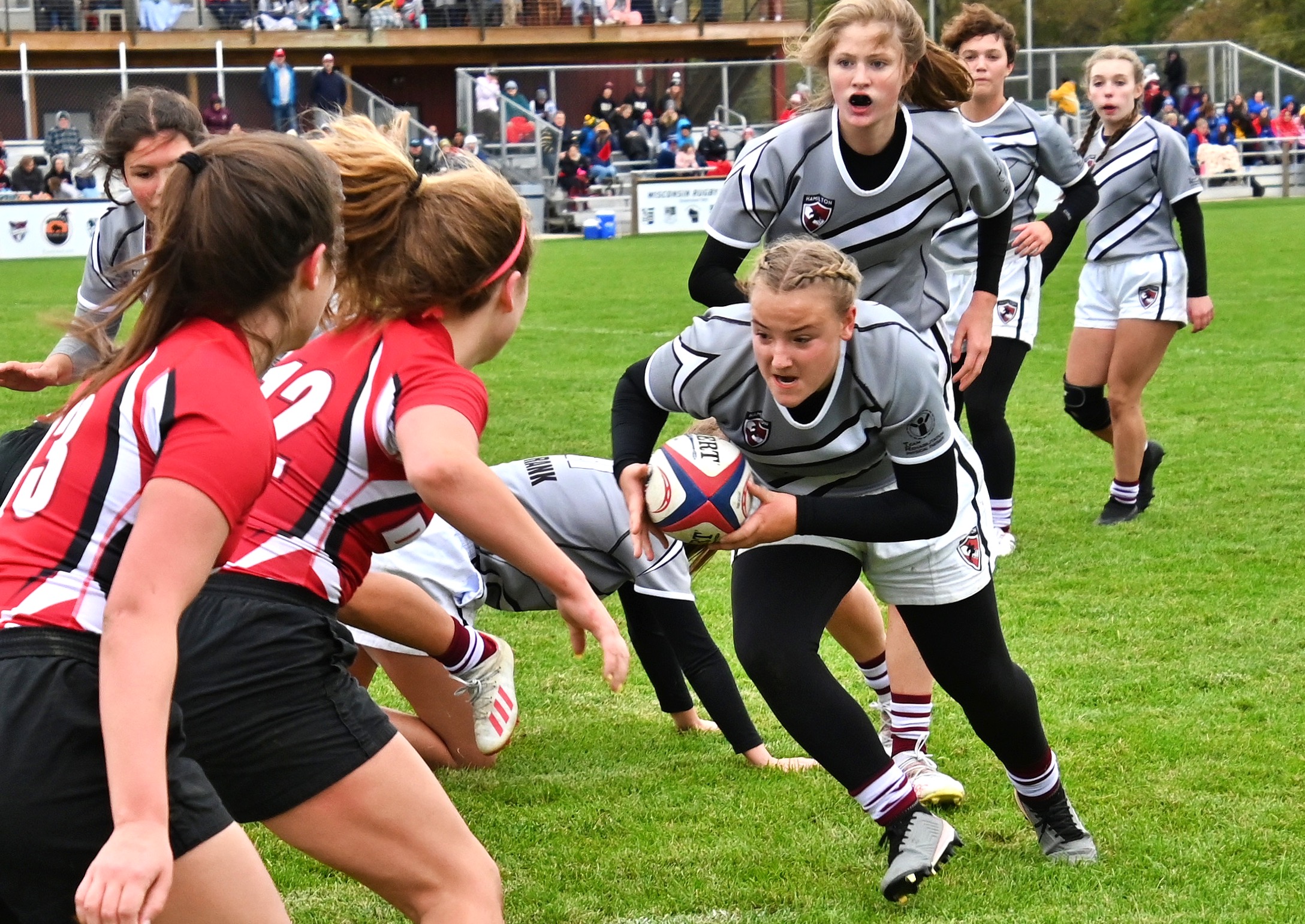 “This team has always been very athletic. Our backs are fast and quick, and they’ve been our bread and butter,” Holloway said. “In those two games, we saw Rachel Rank and junior Ronny Ruedinger and senior Brenna McLay go on big runs, do the tough work, continually rucking. They reached another level to the point where a USA Rugby scout reached out asking for more film. They knew they had done well and scored tries, but the fact that other people outside of your team were seeing that, they were beaming with pride.”

McNeil also called out twin sisters and wings Camille and Jasia Torres, who challenged the defense with lights-out speed and protected the sideline with clutch tackles.

“We don’t’ have a lot of 15s experience, but now we’ve felt and understand what it takes to play a full 60 minutes. We’re learning how to finish,” McNeil said. “There were no tears after the DSHA game. There was happiness. ‘We’re here and we can compete. We’re not getting beat 100-0 anymore.'” 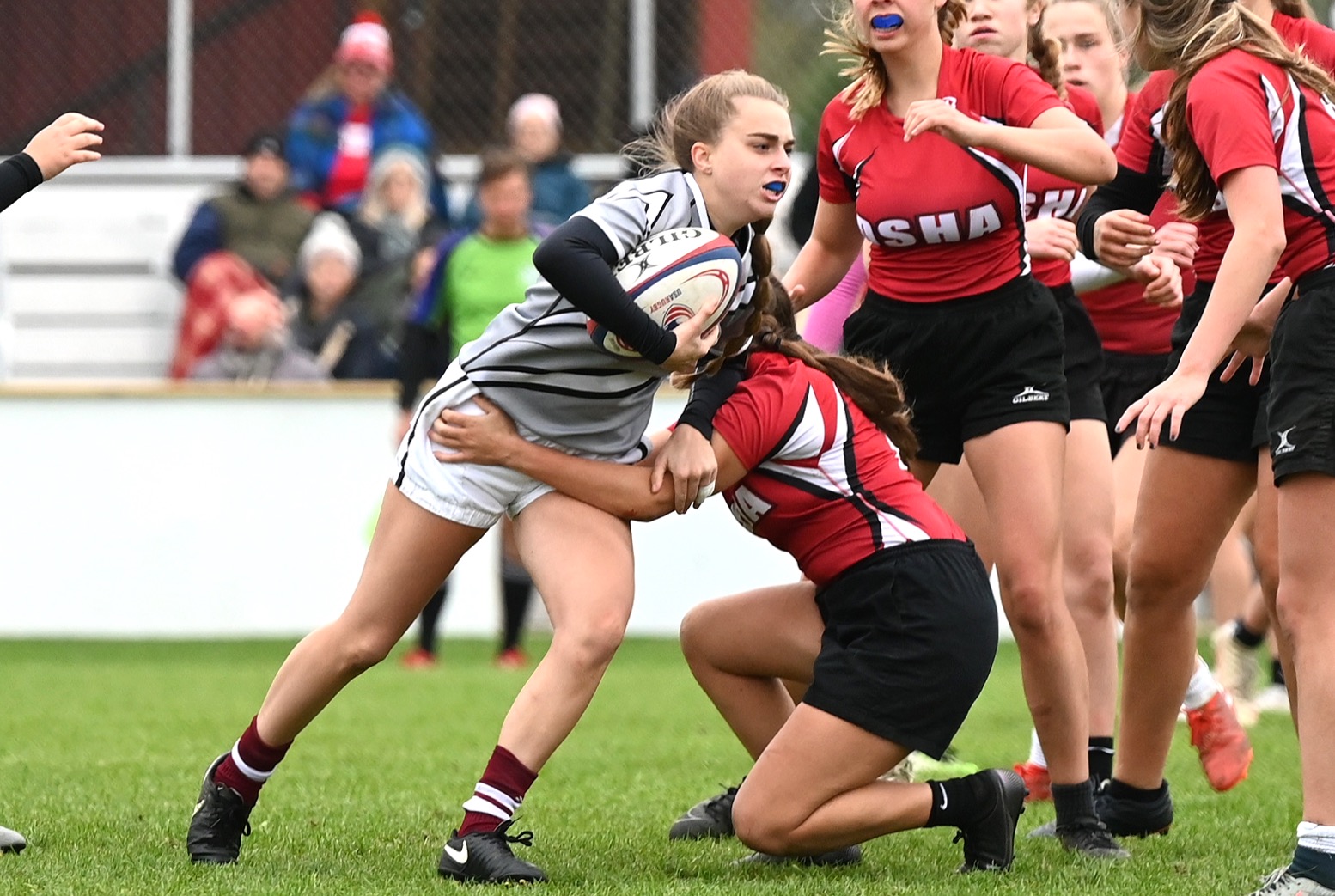 Hamilton will play for 3rd place this Sunday (see the full lineup), and then attention will turn to the spring. In 2022, however, the team will do a hybrid season of 7s and 15s, as Hamilton intends to attend its first Single-School National Tournament in mid-May. With its recent successes, the team is keen to test itself against other 15s teams that aspire to play at the national level.

“Even before this season, we were planning on the national tournament, just to see how it would go,” Holloway said. “But now there’s even more excitement because the girls know they can hang with those teams. They also want some retribution because they know they could have been in that state title game and fell short.”

Looking ahead, Hamilton will only graduate a handful of starters in spring 2022, and the returners will bring that national-level experience back with them next fall. 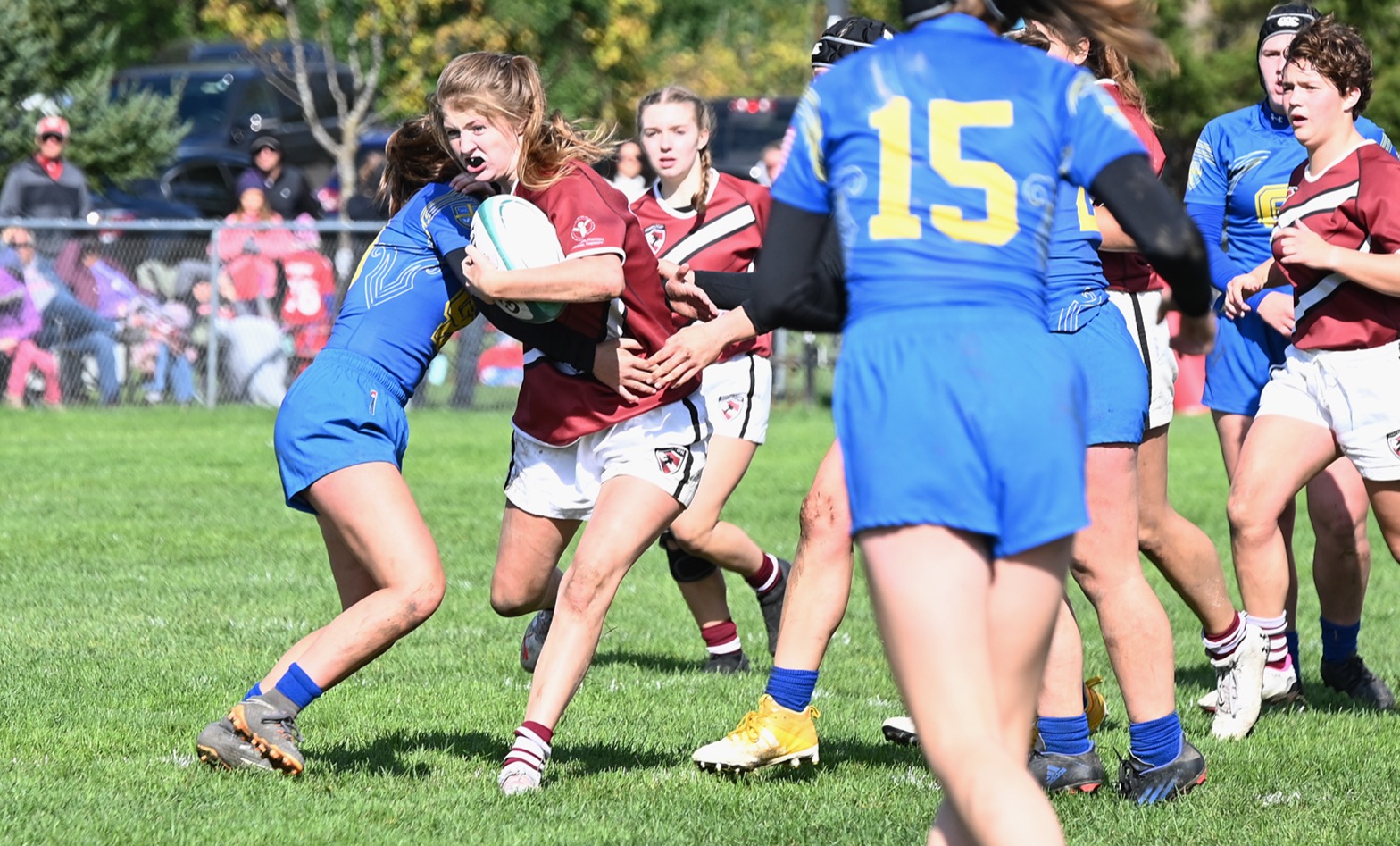 “The girls want to be here and learn,” McNeil said. “The motto is: Every day, let’s get better. They support each other and team camaraderie is unbelievable. It’s a great foundation, the culture we have here. … There’s a lot of positivity and the support from the school and fellow students is really booming.”

“This year has been really nice to see,” Holloway closed. “I started with four players at practice and a bag of balls. Five years later, to still be successful and have a big team with more than 50 players across both seasons, it’s a nice capstone if I can’t personally be here next year [due to work].”

For more information on WGR, the playoffs and more, visit https://wigirlsrugby.org.