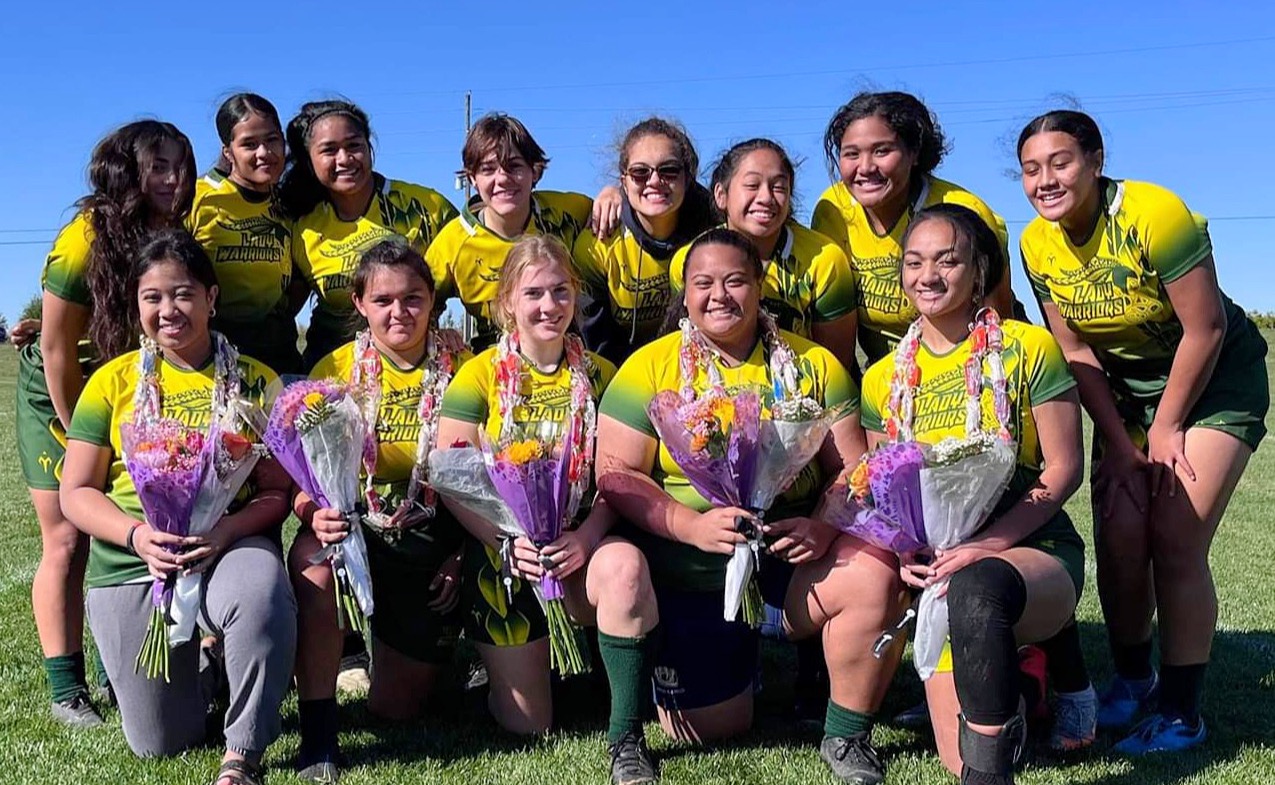 The Independence Lady Warriors have claimed a third Missouri High School 7s Championship, and leaned on internal motivation en route to the title. The team had been itching to return to the pitch during the pandemic, and started recruiting and playing as soon as restrictions loosened. That activity paid off, and Independence just needed to ride that momentum through the fall and through the trophy match.

“Our girls were anxious to play so [Covid-19] didn’t really impact them a lot. We were out there practicing in the heat of the summer,” said Independence coach Brett Sua, who helped create the team in 2017 when daughter Miliama and head coach Maika Sika’s daughter, Avery, wanted a team of their own. “The summer season was more casual, just something to get the girls playing again. It was mostly Missouri teams but an all-star team from Des Moines came down.” 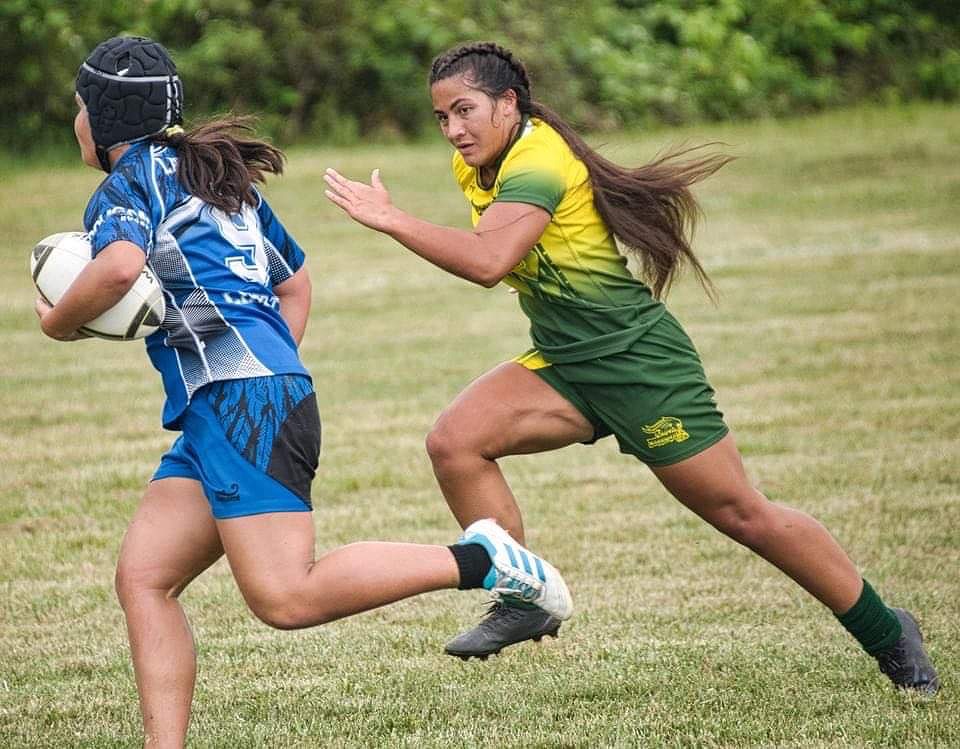 Independence had some good flow for the Missouri fall 7s season and assumed the rest of the competition was similarly prepared.

“Our team was ready. We came with 12, 13 girls,” Sua said of the onset of the 7s season. “But other teams needed to borrow players from us so they could get going. So the tournaments were more like friendlies.

“I was absolutely surprised that we were the only team ready to play,” the coach continued. “It was disappointing because we thought all the other teams were hungry to come back, too. It meant the season wasn’t as competitive as we thought it would be. You don’t want to dominate throughout the whole season; you want the girls to grow.” 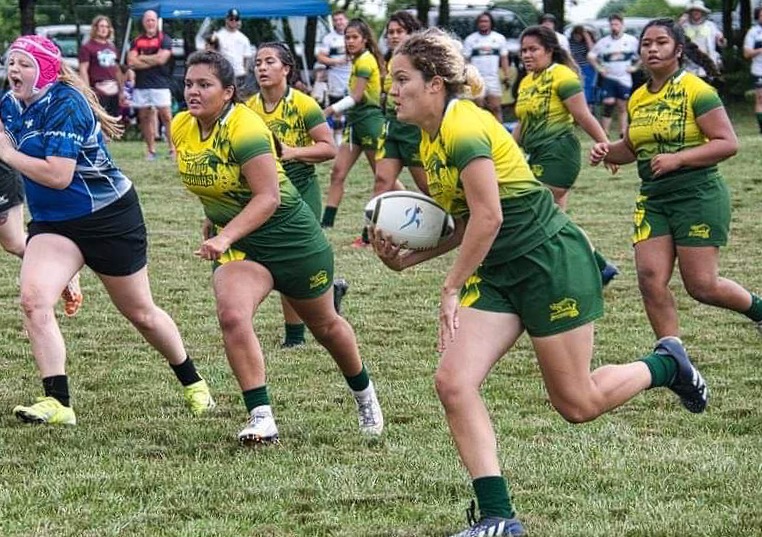 Sua indicated that players were also disappointed but that they didn’t sulk. They trained hard, challenged each other and focused their energies inward.

“They were trying to maintain the spirit of rugby as far as coming out ready to play,” Sua said. “They would not let up against other teams, and that was important because later on in the season, we saw other teams come out ready to play to us. It wasn’t, ‘Oh, we’re tired,’ or, ‘We don’t have enough players.’ They came out to play, too, because our girls wouldn’t let up.

“And that’s a lesson that we learned very early on,” the coach added. “During our first year, we had people telling our girls not to hit their players so hard – even this year, we had a referee say that to us. So we’d go out the first half and they’d come back at halftime, ‘Coach, they’re hitting us hard and it’s hurting us.’ You don’t want to put the players in that position.” 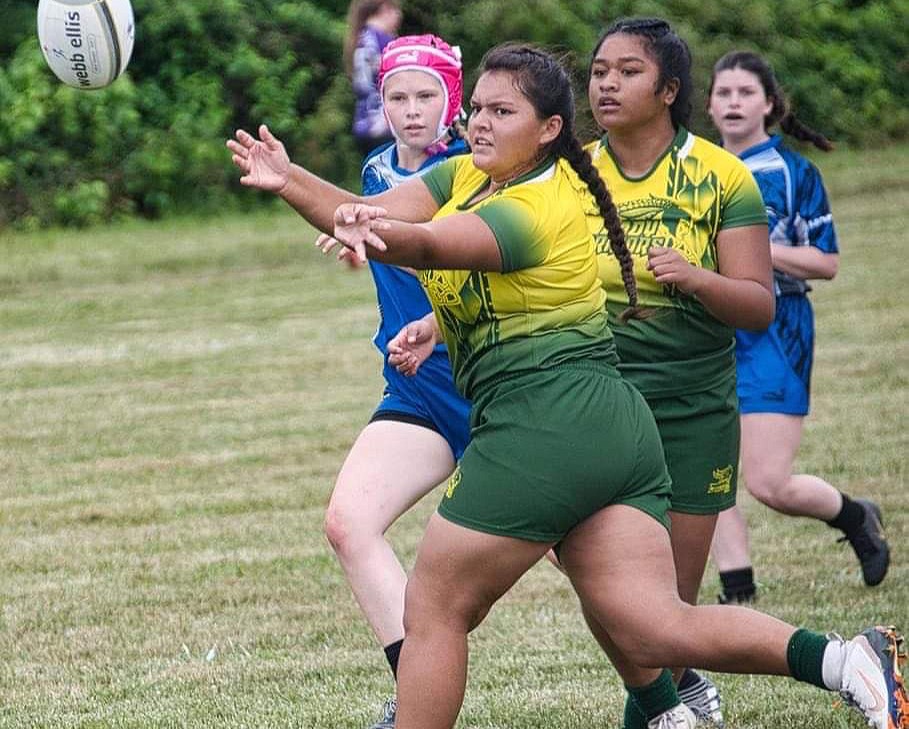 Captain Mary-Mae McMillian and co-captain Ana Fonua have set the example for the season. They returned to the pitch fit, strong and mentally ready for the league season.

“They make our jobs easier,” Sua said of the seniors. “They’re always ready to go. They’re warming up the girls and leading at practice. And I let them make a lot of decisions, too. When the other teams need players, I ask the captains who they want to send over. Mary-Mae has volunteered to play for the other team, and when she went over, she never let up even when tackling our own girls. They want to show the girls that this is rugby; there’s no pattycake on the field. They’re great leaders and we’ll miss them when they graduate.”

“They set good examples and really push the girls to do things,” Sua said. “We train them to play every position. Tausala is one of the big girls so she’ll go in as prop but she can also play flyhalf – any position that is needed. She’s more vocal and you can almost hear her repeating exactly what the coaches are saying to the girls. It’s nice, because [that instruction] isn’t coming from the coaches all of the time; it’s coming from a player.” 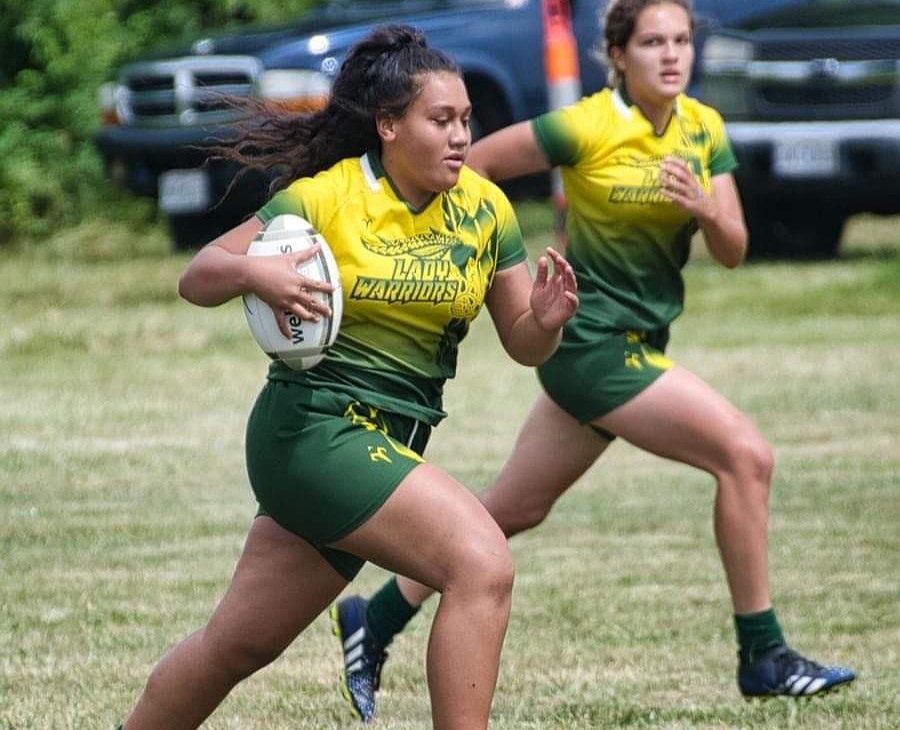 The team recruited well and sisters from California – Lupe and Dorques Fa’amoe – took to the game quickly.

“It’s been fun to see them grow in the game,” Sua said. “When Ana got hurt, Lupe stepped up to play scrumhalf. That’s an important position and she played really well, with no experience. She’s a junior so we’ll have her again next year. But all the girls are like that – they can fulfill those leadership roles when we need them to.”

Freshman Sevi Aumua is also a first-year and injects nice speed to the pitch. She plays center or wing, “and already performs at a very high level for someone who has never played this game before,” Sua said. 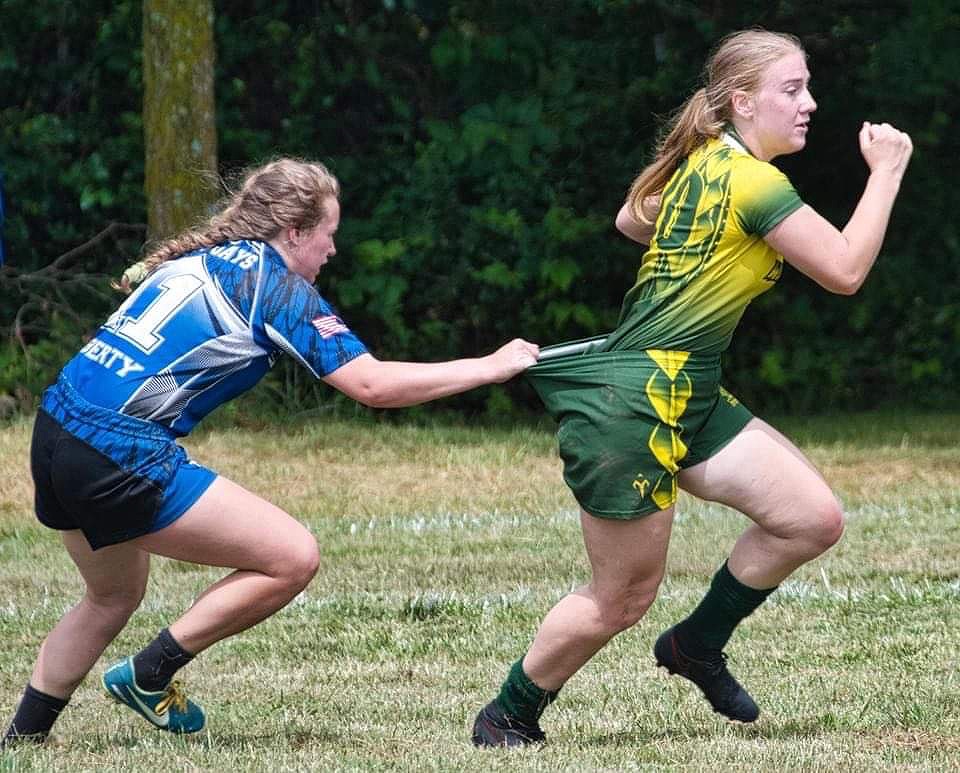 The coach felt similarly about newcomers Nina Porter and Jaleena David, and named freshmen Lupe Tali and Laura Jorgensen as the two most improved players across the course of the season.

The Missouri championship tournament took place on Oct. 16 and Independence took the top seed in the final four.

“When we prepared for the championship, we practiced everything,” Sua said of keeping that hungry mindset. “I told the girls, ‘You probably think I’m paranoid or something, but you never know who’s going to show up and what they’re doing. They could be saving their secret weapons for that day. So don’t think about how you dominated the whole season and then let up in the championship.’ We went in with the mindset that every team is a tough team, and you don’t underestimate them.” 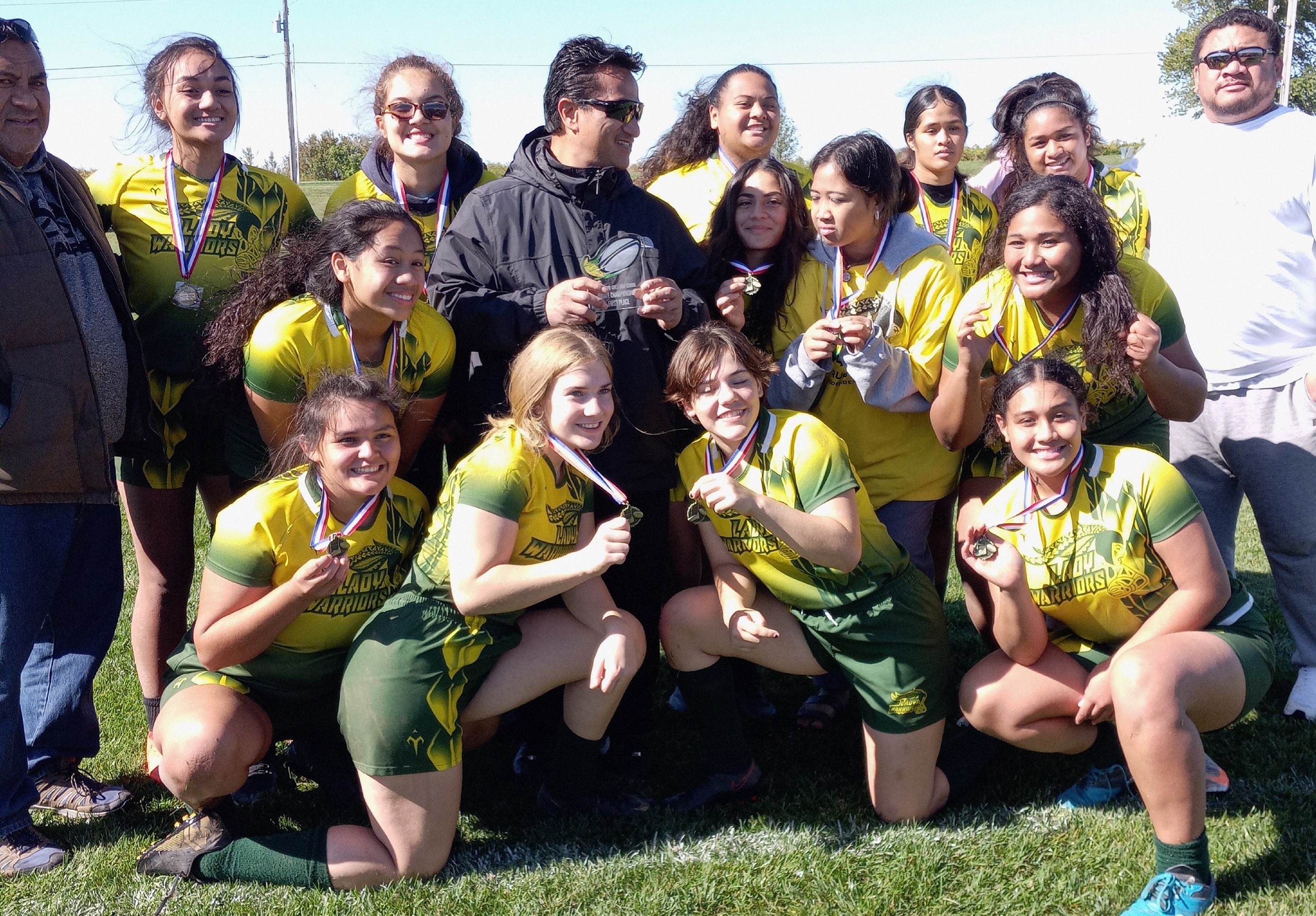 Independence won the Missouri HS 7s Championship, its third since the team’s first season in 2017.

“Yes, they did put in their best performance of the season,” Sua said. “In the beginning, they missed some tackles because they were so anxious and ended up breaking their lines, but they calmed down and moved that ball around. They played really hard that day, and ev
eryone – the fans, the parents – they really enjoyed it. One of our new girls, Sevi, put in some really good hits and defensive play. I was really impressed with all of the girls and they played their best that day.”

The team’s already talking about the spring and 15s opportunities. The Lady Warriors will inherit some players from other teams that don’t field 15s squads, so numbers won’t be an issue. The staff is considering tournament options and would be a great addition to the high school club national tournament in Wayne, Neb.