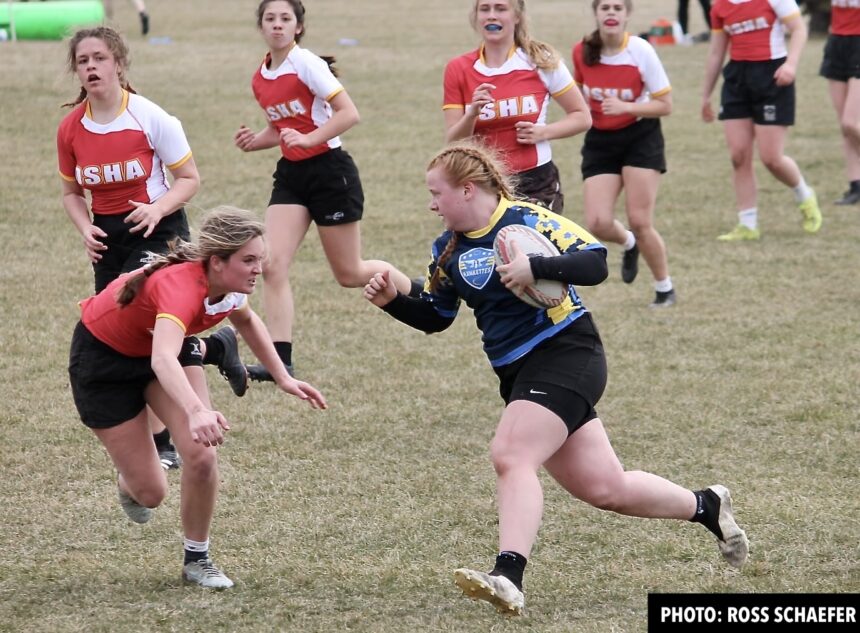 The following is an overview of the girls’ high school rugby that is occurring across the country this spring. There are certainly gaps in coverage, and as that information is discovered, updates will be made. Feel free to alert Jackie Finlan with any and all details.

ARIZONA
The Grand Canyon State plays its championship season (7s) in the winter months, and Scottsdale won the high school and U16 titles in 2022. There’s been an effort to grow into 15s and those first steps are taking festival form. The Arizona Bobcats have also played 15s already.

CHESAPEAKE
There are four Division I teams (North Bay, West Carroll, Alexandria City, Vienna) and four Division II teams (West End, Valkyries, Fort Hunt/Richmond, Maryland Exiles) in this Maryland-Virginia-D.C. league. North Bay and West Carroll also participate in the EGRL (see below) and they square up this weekend. In DII, the Valkyries are looking the strongest, while Fort Hunt / Richmond are close behind.

CONNECTICUT
Aspetuck, Greenwich, Simsbury and Southington are playing DI 15s, and young or developing teams are playing 7s in DII. Rugby Connecticut hasn’t published a girls’ high school schedule, but Aspetuck is looking like the team to beat early on, defeating Greenwich 33-12 and Simsbury 110-0 so far. Greenwich, which fields DI and DII teams, then followed with a DI win against Southington.

EGRL
This is a new league that involves five teams from five states, and layers on top of members’ local competition. Morris is 3-0-1 and the only team to complete all of its league games so far. Doylestown tied the Lions 31-31, and Aspetuck earned a bonus point in a 25-19 loss. North Bay and West Carroll are looking for their first wins in the regional competition. 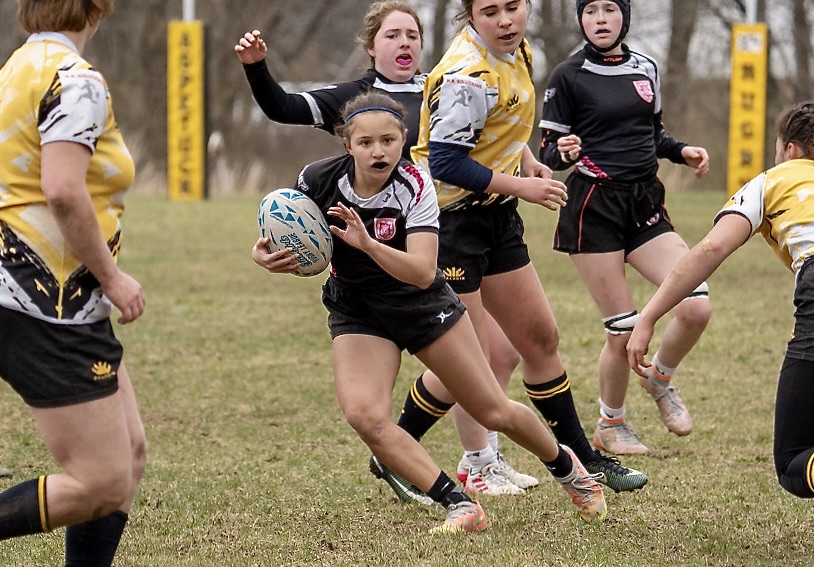 GEORGIA
As Dean Pappas explained, the focus is less on a “Georgia season” and more on playing rugby, wherever that may be – tournaments local and across state lines, combination teams, players on various select sides. It’s mostly 7s, although players have been playing up (USA South) to get 15s exposure.

IDAHO
The state is running two club leagues – DI and DII. Eagle is 5-0 in the eight-team Division I and has outscored opponents by 200 points. The Mustangs are also heading to the single-school national tournament in Ohio. The battle for second place in the standings is tight, as Meridian (3-1), Mountain View (3-2), Rocky Mountain (3-2) and Owyhee (3-2) are all within striking distance of each other.

A definitive leader has not yet emerged in the four-team DII. Emmett is 4-1, having dropped a 50-24 contest to Middleton (2-2) and beating Timberline (3-1) 12-5. Timberline beat Middleton 24-14. There are two more weeks of regular season play.

ILLINOIS
The state started playing games in early April, and Chicago Rugby Club Academy impressed in a 66-21 win against Taft (see photos). It’s the only score reported thus far, but there are seven total teams on the schedule.

INDIANA
Just a handful of games so far with postponements and cancelations, but last weekend saw Warsaw beat Mudsock 17-5, and Noblesville beat Westfield 24-0. Four games are scheduled for today, April 20.

Additionally, Elkhart, Ind., is the host for the Midwest Girls’ High School 15s Championship, to be held April 30-May 1 at the Moose Rugby Grounds. Read more.

IOWA
Plays its championship season (7s) in the fall; however, the state all-star program, the Hawkettes, have added 15s for the spring. Read more. The team traveled to Missouri in early April for a 27-0 win (as well as developmental game), and then welcomed Wisconsin’s DSHA on April 10. The Dashers are one of the most successful girls’ high school programs in the country (catch them at the upcoming Midwest HS 15s Championship) and won 44-7. A developmental game was also played. The Hawkettes will return to Liberty, Mo., on April 30 for one more all-star 15s trip.

MASSACHUSETTS
Rugby is an MIAA sport, but the site isn’t updated with a 2022 schedule or participating teams. League games did start last week, and Weymouth beat Algonquin 25-12, and Belmont played Lincoln-Sudbury to an unknown result.

MICHIGAN
Like Wisconsin, Michigan holds its 15s championship season in the fall (Sparta Rock is the current champion), and spring is more of a friendly season, save those looking to play at Midwests and/or nationals.

MINNESOTA
There are six teams on the schedule, and two of them are penciled in for 15s: Albert Lea and Becker. Eagan, Hopkins, Minnetonka and Osseo are playing 11s with 20-minute halves. The regular season runs from April 20-June 3, and then the state tournament is June 11.

MISSOURI
Need some more follow-up here. Missouri plays its high school 7s in the fall (Independence is the current champ) and there are some combination efforts to play 15s in the spring. More to come.

NEBRASKA
There are no girls’ high school leagues (that we know of) in Nebraska, but Wayne State College is hosting the 2022 Girls’ High School Club National Tournament on May 20-21.

NORCAL
Rugby NorCal has a lot of high school and middle school teams in motion, but there are no schedules or results on the site. SacPal Amazons, Lamorinda, Land Park, Pleasanton, Carondelet, Bishop O’Dowd and newcomer Overfelt are able to play 15s, while the balance is playing 7s or 10s round robins each weekend. Playoffs are meant to be April 30, and the championship May 7 in Sacramento.

NORTH CAROLINA
The Winter 15s Championship finalists – Charlotte Cardinals and Wando Wahines – are both undefeated in the spring 15s season, and they face each other on April 30 to close out regular-season play. May 7 is playoffs for the top-four teams, and May 14 is the state championship.

OHIO
Rugby Ohio names multiple champions based on single-school or club status, and student population, but you’ll see teams play outside of their classifications during the regular season before separating out in the playoffs.

Also, the 22nd Annual Girls High School 15s National Tournament is being held in Ohio on May 21-22, and Notre Dame College in Euclid is hosting.

OKLAHOMA
There’s no sign of a schedule on the Rugby Oklahoma site, but it does mention 10s for its high school girls. F5 has traveled to Texas to participate in a couple of 7s tournaments, so they’re certainly active.

OREGON
Eight teams are playing games this spring, the majority of which are 10s. The Valley Panthers, who won Oregon’s fall 7s championship, are 4-0 so far. Its closest games came in week one – a 30-25 win against second-place East County/Grackles – and 29-15 victory over Newberg on April 9.

PENNSYLVANIA
The state is divided into East (4) and West (3). Doylestown is 2-0 in the East, besting the Knightmares 36-17 and Conestoga 91-0. Moon Area hasn’t actually played a league game yet, gaining a forfeit win against a combination Hollidaysburg team, and having its State College game postponed. The Tigers did travel to Charlotte Ruggerfest and played City Honors (N.Y.) to an 81-24 win.

SOCAL
March-May is for high school clubs. Nine U18 teams are playing 10s, and nine U15 teams are playing 7s. Fallbrook and Belmont Shore entered Week 3 undefeated, dominating in their respective areas. When they faced each other, the Warriors won 31-7 to stay undefeated, but also relinquished its unscored-upon record. Both teams showed really well at Tropical 7s. Fallbrook won the U18 Elite title, and Belmont Shore won both the U16 and U14 titles.

TEXAS
Rugby Texas held a four-stop 7s series, and teams accrued standings points that will seed the state championship. The Woodlands (read more) led the field until the last tournament in Dallas, where a 1st place finish from TNT (Texas Nuclear Thunder) afforded a one-point lead in the standings. It’ll all sort out at states on May 14 in Austin.

UTAH
The Majestics beat United 29-22 and Provo 21-14 last weekend, and has two more league games before states. United and Provo play each other on April 30, and all three (as well as Highland) are heading to the Girls High School Club 15s National Tournament on May 20-21 in Wayne, Neb.

WASHINGTON
Rugby Washington has been playing multi-game days since late March, and Liberty and Kent have merged as leaders. On April 16, they finally faced each other and Liberty prevailed 29-27.

WISCONSIN
The state holds its 15s championship season in the fall (Catholic Memorial is the current titleholder) but it also holds a state 7s series, which is set to kick off this weekend.

South Dakota Wants 7s Nationals to be the Norm