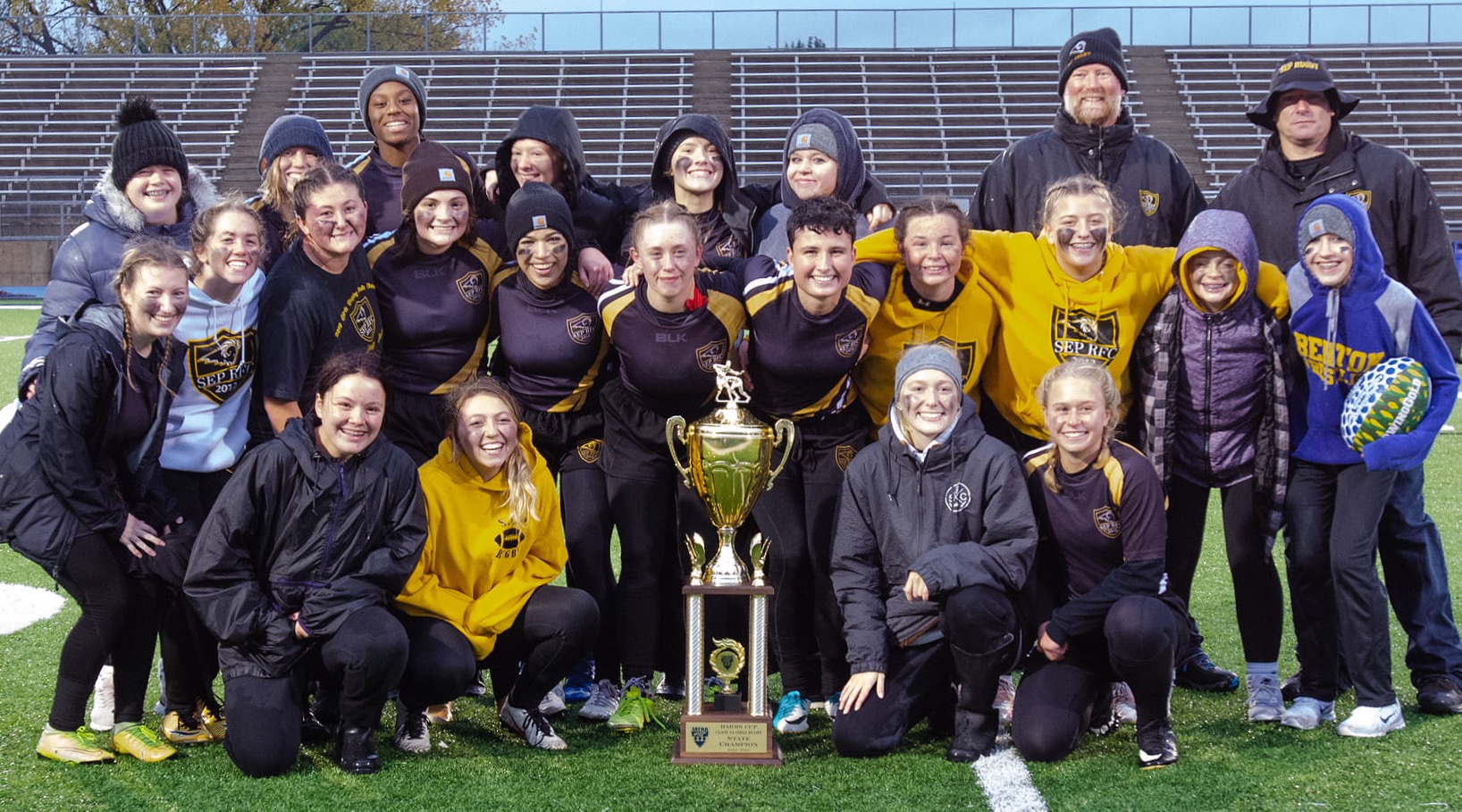 Southeast Polk won the Iowa Youth Rugby Association 7s Championship on Sunday, ending the fall with victories against Ankeny, Waverly Shell Rock and Des Moines Roosevelt for the trophy. The final was particularly satisfying, as it provided some recompense for the spring 2021 season, which ended with a single-digit loss to Roosevelt in the title match.

“We definitely talked about the spring. It was a driving force for us,” Southeast Polk head coach Joe White said. “I think the girls who played in the spring – and maybe even the coaches – had gotten a little comfortable. That’s not to say that the teams we played against, especially Roosevelt, didn’t deserve what they got. Roosevelt was the better team that day [in the spring final].

“Our spring crew had some very dominant players, and we still had that this fall, but this group is more of a smaller, grinder type,” the coach continued. “We weren’t going to be able to push people around and would have to fight for everything, and they understood that going into the fall.” 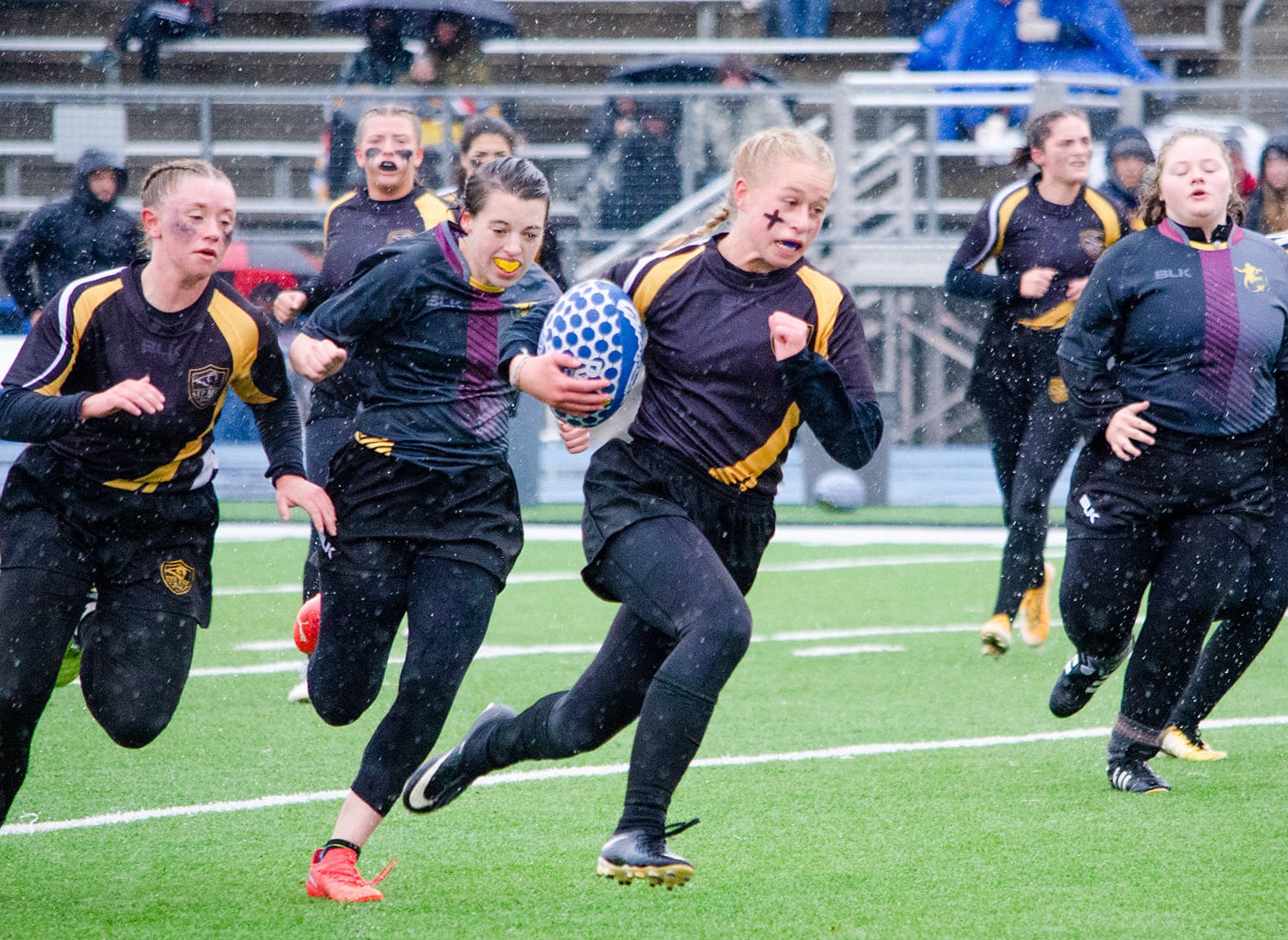 Southeast Polk returned four starters from the spring 2021 team. Experienced veterans Annika Dearden and Emma Schaefer were named captains and provided expert leadership and consistency on and around the pitch. Fellow returning starters Jade Kuriki and Felicity Severs also pumped up the leadership and served as examples for newcomers to follow.

“From the beginning [of the season], I felt like we had a team that was going to be solid,” White said of expectations. “I knew teams like Cedar Falls and Waverly Shell Rock had been practicing over the summer and were working well together. I knew they’d be great competition and I was never going to count either one of those teams out. But we knew from the start that we’d be competitive.”

The team picked up some great talent that fit seamlessly into the squad and also allowed some positional shifts for returners.

“Rebekah Fuller has the build of a center, but we had a shortage at prop and put her in there,” White said. “It just worked. She’s extremely fast and very agile, so if we were able to get the ball back to her on the second or third phase, she was very hard to defend.” 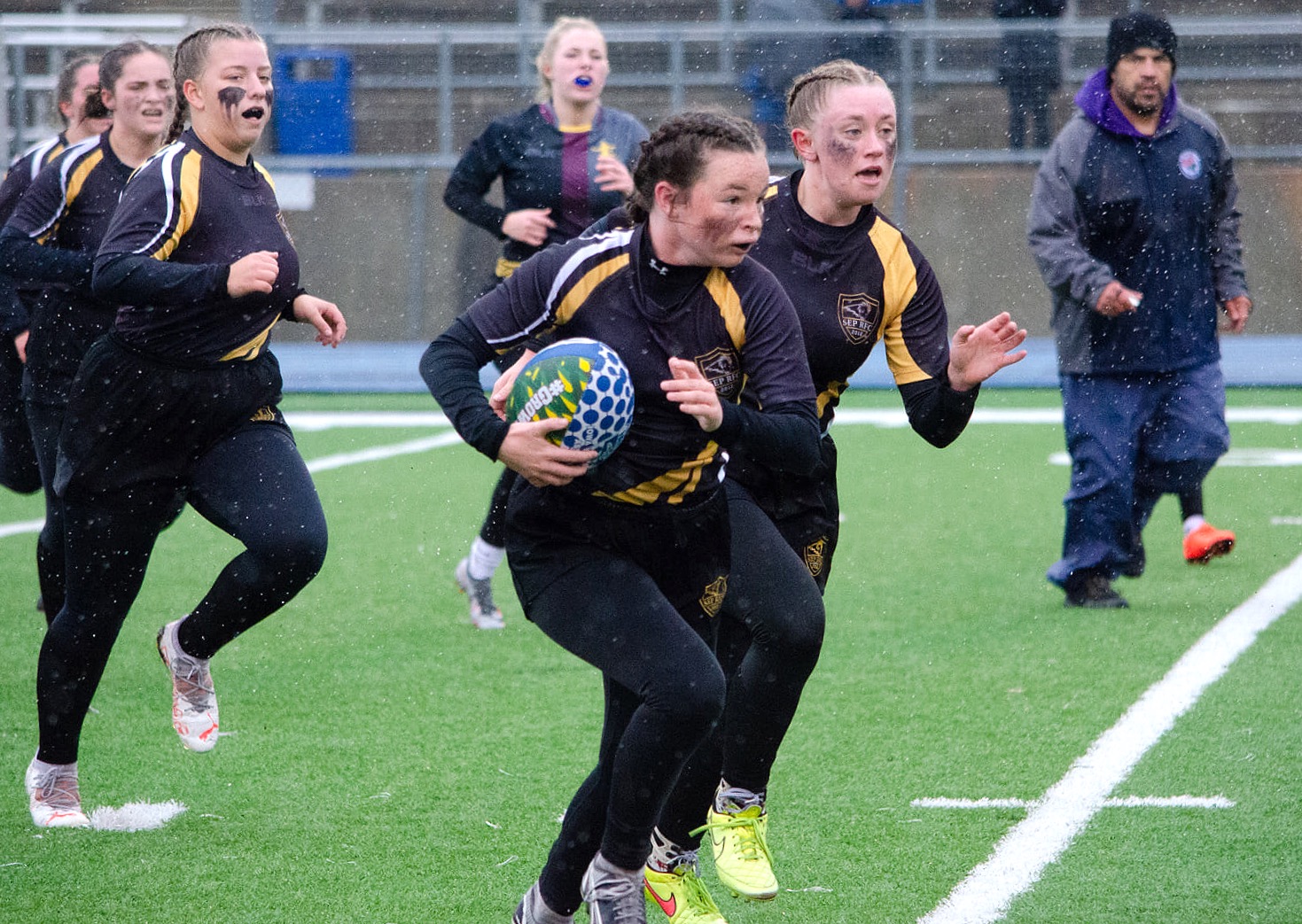 Southeast Polk also picked up Cecilia Scarff, who was able to step into the demanding role of scrumhalf, releasing Schaefer from the halfback position. The captain played center, where her experience and athleticism really showed well.

It was a five-week regular season, and teams played two games per match day. In week two, Southeast Polk dropped a 12-5 decision to Waverly Shell Rock. And then it’s last league game was a 12-10 loss to Cedar Falls.

“It’s the first time in three seasons that we’ve had any regular-season losses,” White said. “As much as I and the team hate to lose, both were good matches and it kept the girls humble and hungry. That would be the silver lining: The girls did not get complacent this season.” 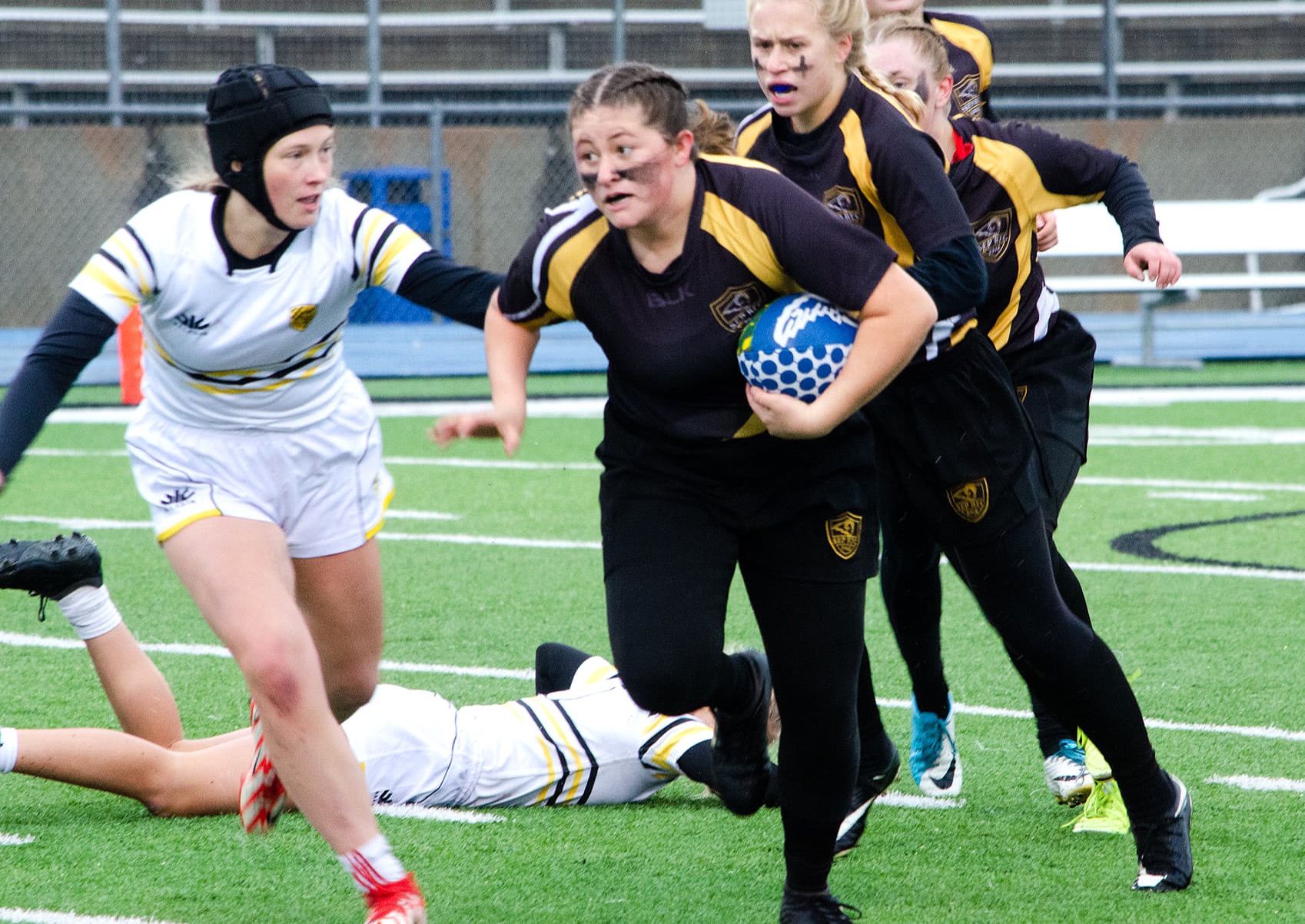 “The last two weeks of practice, it was little things the girls were doing, and you could see the game was coming to them,” White said of the team’s readiness for post-season. “Nothing was forced or scripted. It was very natural movements for them. When they can do all the things and still look like they’re having fun with it, it gives them confidence.”

Southeast Polk played Ankeny in the quarterfinals and started working the bench halfway through the first half. Meanwhile, Waverly Shell Rock defeated CR Washington for a berth to the semifinals.

“They were our first loss of the regular season and the girls were very bitter about that, because they thought they should have won that game. Little mistakes cost them and they were eager to get that one back,” White said. “Waverly Shell Rock is a well coached and a very physical team, so it was definitely a fight. … But they never advanced to our 30, and so never got within scoring distance. That says a lot about our defense and being able to hold that line.”

Southeast Polk won 12-0 to advance to the final. 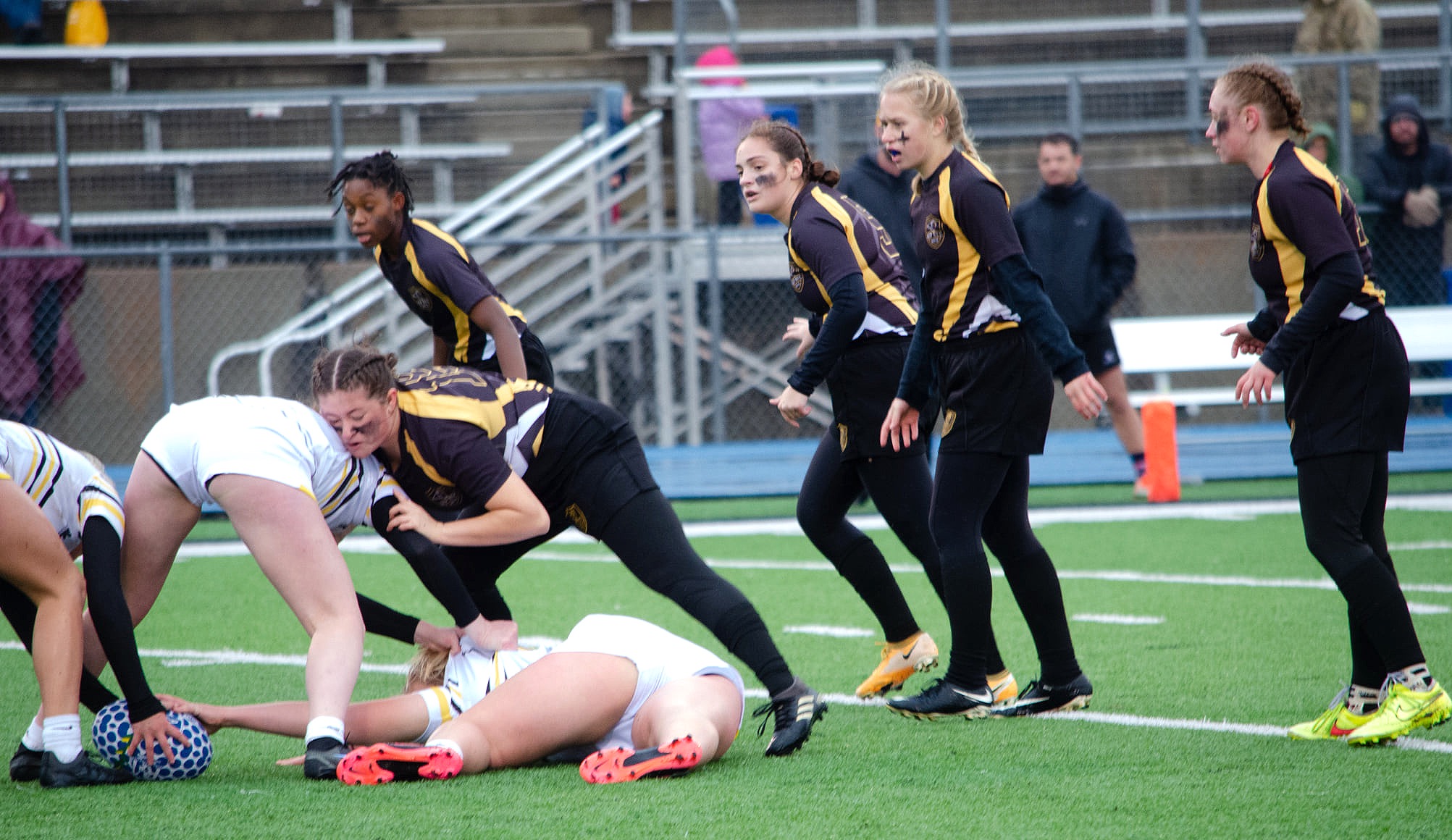 “That’s got to be Emma,” White said of Schaefer setting the tone on defense. “She is an extremely aggressive young lady. She likes to get in there and mix it up with people. She likes to be the grinder and tackling girls. Likes to be the one who tries to break contact. Annika is the same way.

But the one that’s really come on this year is Felicity Severs,” the coach said of the sophomore. “She’s an extremely fast girl and we have her on the wing. But she’s even said, ‘Coach, the contact part is the part I’m least comfortable with.’ I don’t know what struck her mid-season, but something just ignited inside her and she’s become a very consistent, reliable tackler. That’s part of the reason why they gave her the championship tournament MVP. She was always making the tackle and setting the ruck. And she scored half of our tries [Sunday]. She was a rock star.”

That victory set up a championship rematch against DM Roosevelt, which had defeated Indianola and Cedar Falls en route to the title bout. The teams exchanged sideline breakaway scores early on, and Southeast Polk took a 12-5 lead into the break. 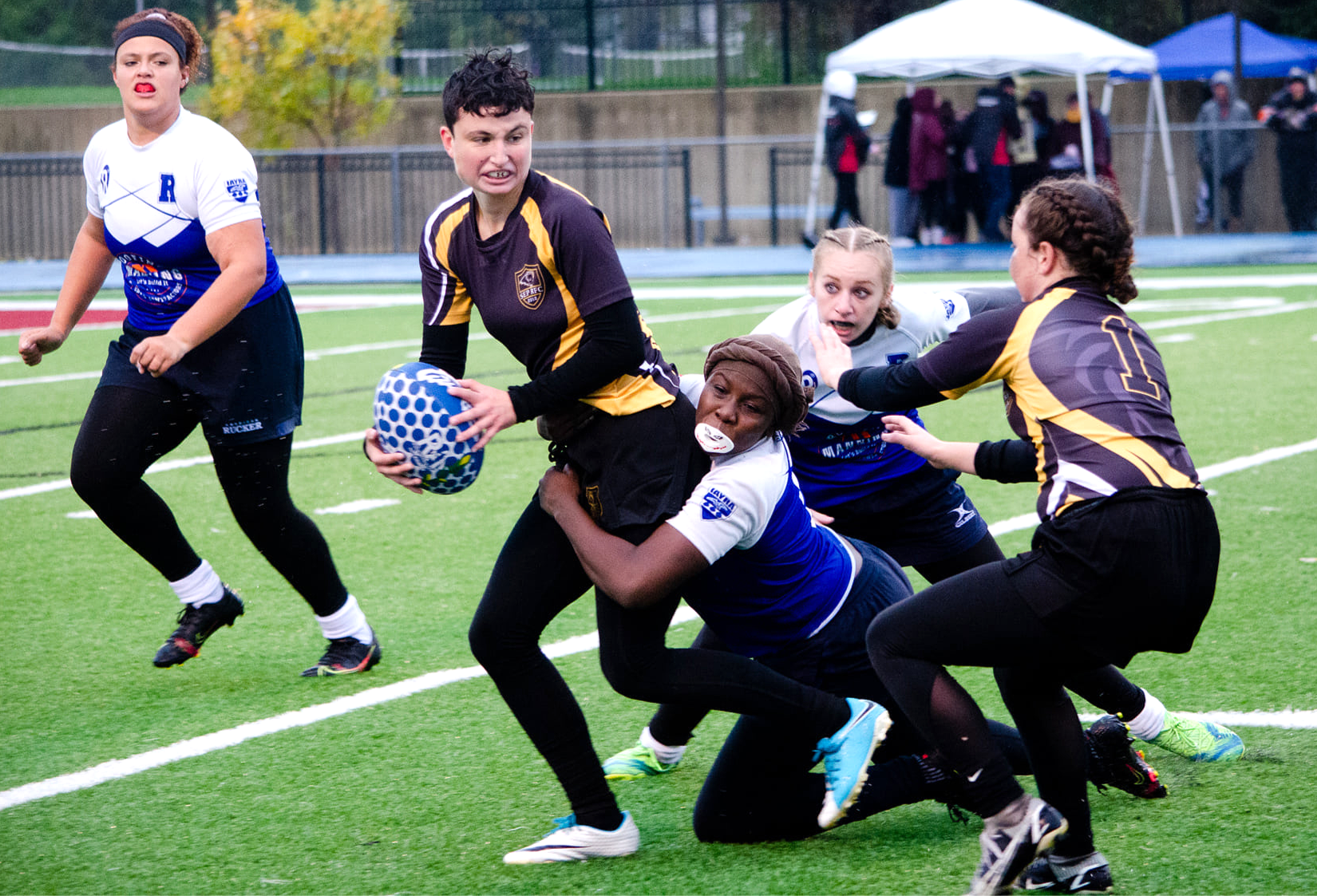 “That’s not a lot in 7s,” White said of the halftime lead. “But watching the body language of our team versus theirs, you could tell our girls had a lot more life in them. We have an amazing strength-and-conditioning coach [Matt Sillanpaa] and he makes sure the girls and boys are ready for anything that’s thrown at them. We pride ourselves on being a second-half team. We scored a quick try in the second half and you could see the demeanor of Roosevelt just drop. They were running out of gas. Roosevelt is a well coached program, but we knew that the conditioning we put our girls through had built them up.”

Southeast Polk pul
led away in the second stanza for a 35-5 win.

“I think this one was a big team win,” White said of this year’s significance. “If you look at all the stats all season long for our girls, other than conversion points, we didn’t lead the league in anything. And hats off to Morgan Linck of Cedar Falls, who did lead the league in tries scored. But if you look at the final numbers, we had 4-5 girls in the top 10 try-scorers for the league. 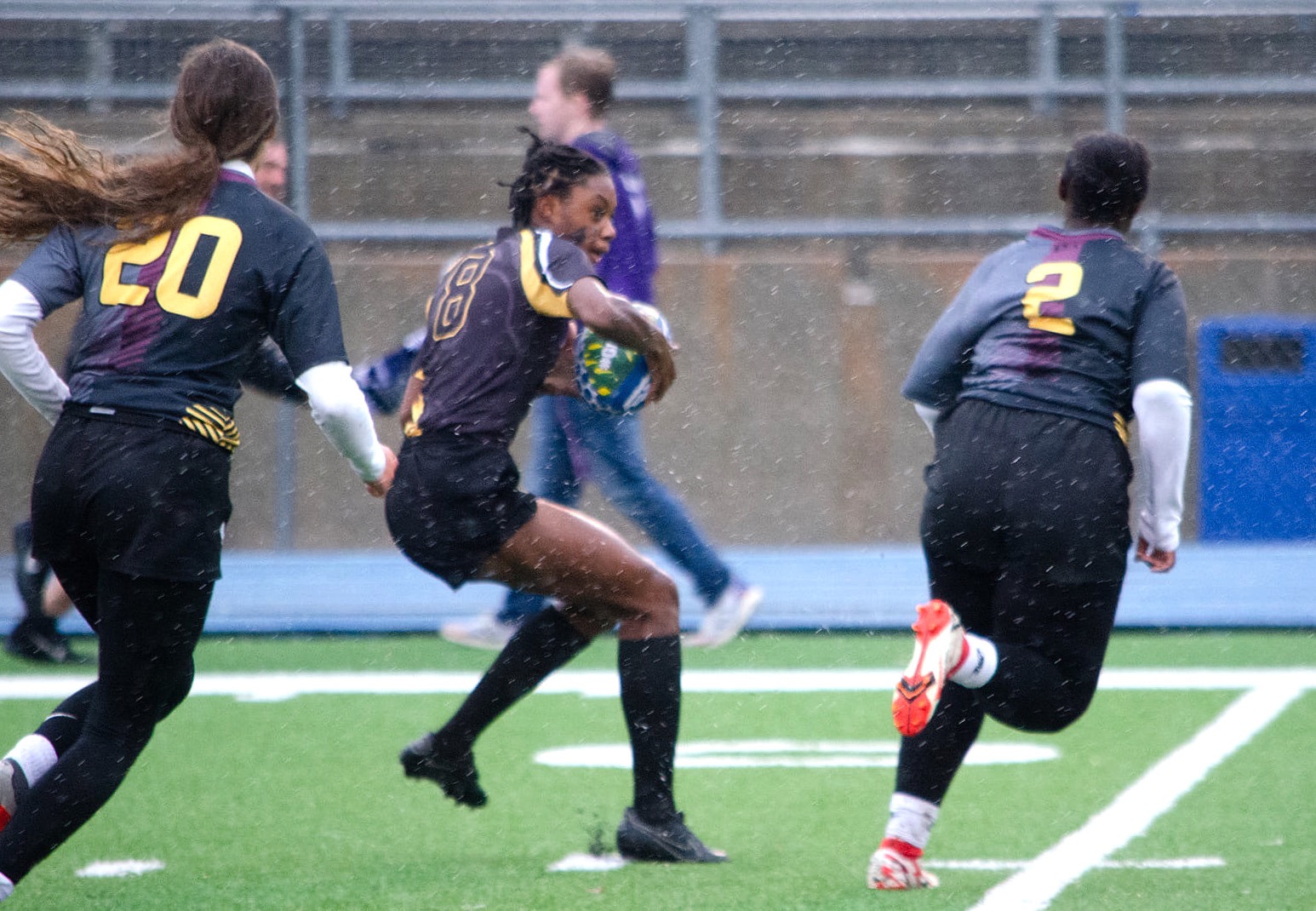 “It’s a testament to the team environment, the selflessness and culture we’ve got going on,” the coach conitnued. “So many girls would rather go into contact, offload to their teammate and set them up for a try. So that’s the big thing – at the end of the day, [the title] wasn’t just one person. Everything was so even, and everyone was so in it.”

That’s it for girls’ high school rugby in Iowa, allowing time and space for all-star rugby in the spring and summer. Southeast Polk is sending eight players to its nationally ranked wrestling team this winter. There’s a fantastic relationship developing between the two programs, and it’s mutually beneficial to the athletes involved.

For more information on the championship, visit IAYRA’s Web site or Facebook @iowayouthrugby.