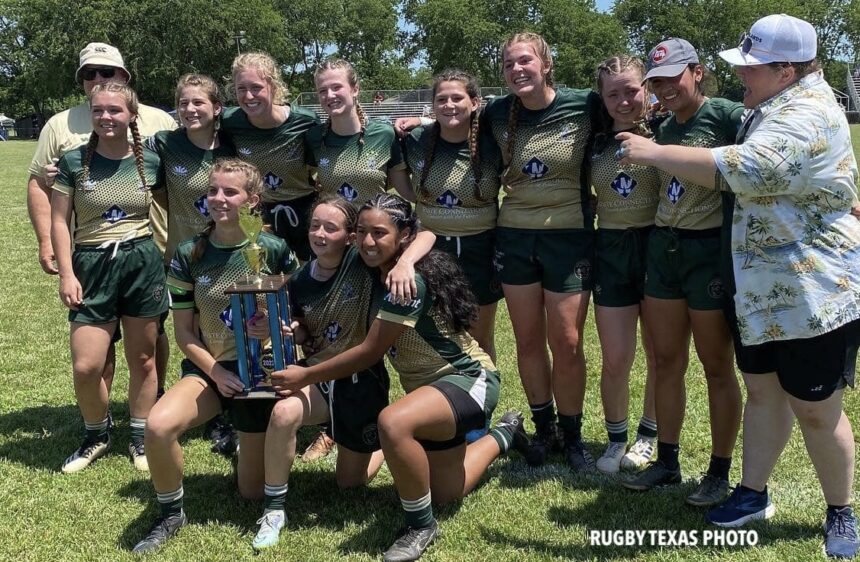 In Idaho, Eagle followed its fall state 7s championship with a 15s club title run this spring. The Mustangs went 7-0 in the regular season and beat Mountain View 34-12 in the Idaho 15s state championship. Eagle then traveled to the High School National Tournament in Ohio, representing the farthest west team in the competition, and finished 3rd on its debut. Read more from head coach Kraig Smikel.

Idaho also runs a four-team Division II, and top-seed Emmett earned the title after going 6-1 in regular season, defeating Mountain Home 88-0 in the semifinals, and then finishing with a 47-24 win against Timberline in the final.

Next door, Montana held its state championship. Four teams competed in the 7s semifinals and final Saturday. Bitterroot defeated Missoula, and Kalispell bested Helena in the semis, and then Bitterroot topped Kalispell for the trophy. Stay tuned for interview with Bitterroot coach Dana Cather.

In North Carolina, the Charlotte Cardinals kept its momentum from the winter 15s title run and poured it into the spring 15s season. There were some forfeits mixed into the spring, but there was good competition to be had, especially against the Wando Wahine – finalist from the winter championship. The teams faced each other on April 30 and the Charlotte side won that game 37-7. After winning their semifinals, the two battled out another final, and the Cardinals won 24-5 to complete the long season. Wando went on to compete at the High School National Tournament in Ohio and finished 7th in DI.

Oregon played a mixture of 7s, 10s, 12s and 15s this spring, all depending on squads’ number week by week. In the state semifinals, fall 7s champion Valley Panthers beat Chinook 47-5, and East County/Grackles beat Salem 27-17. In the 5th place semifinals, Newberg topped Renegades 27-10, and Canby bested David Douglas 25-15. In the championship final, Valley rallied from a 28-5 deficit in the second half to win 31-28 against the Grackles. It’s an incredible story. Stay tuned for more from head coach Mike Fair.

In Pennsylvania, defending champion Doylestown defeated Downingtown 29-7 in the 15s semifinals, while Moon Area topped Hollidaysburg 54-38. On May 21, the finalists met at the PSU Berks campus, and the Moon Area Tigers won their first DI championship, 43-26 against the Dragons. Read more from Moon Area head coach Rocky Nurss.

In Tennessee, Columbia Central took the top seed heading in the state playoffs as the only undefeated team. The Tigers defeated Riverdale 42-17 to advance to the title match against Raptor Rugby, which had eliminated Spring Hill in the semifinals. On Saturday, Raptor got redemption from its 36-29 regular-season loss to Columbia Central and finished the season with a 40-24 title win. Read more from Raptor head coach Josh Crumm.

Texas held its state 7s championship, involving the top-four teams in the competition. Texas Nuclear Thunder (TNT) bested Plano 21-7 in the semifinals, and Woodlands eliminated Dallas with a 38-0 victory. The final came down to a single point, but the Woodlands were able to secure a 15-14 win to repeat as the 2022 Texas state champions. Read more from Woodlands head coach Chelsea Peper.

For the first time in a long time, the Utah 15s state championship did not feature United, which lost to the Majestics 46-17 in the state semis. Provo had eliminated Wasatch 21-0 in the semifinals, setting up a final against the Majestics. A fantastic game evolved, and the Majestics emerged with a 19-12 win and championship trophy. Majestics and United featured at the High School Club National Tournament in Nebraska, finishing second and third, respectively.