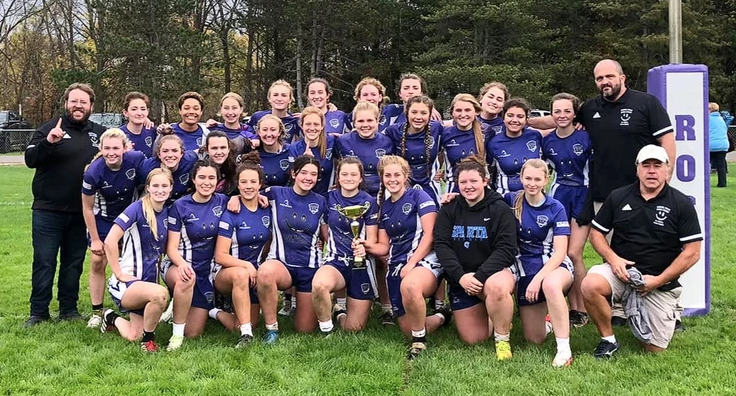 Sparta-Rock stayed active the past year, playing 7s, picking up games against Indiana and Ohio teams, and the effort paid off this fall. On Sunday, the team defeated Grandville 47-0 for the Rugby Michigan 15s Championship, and much like this year, intends to keep that momentum going through the spring.

Sparta-Rock head coach Andy Dauser is also the president of Rugby Michigan, and when Covid-19 prohibited 15s in fall 2020, he tried to rally teams for some sort of organized activity.

“We were pushing for it,” senior co-captain Ashley Cowdrey said of players’ interest in game time. “We were just practicing and practicing, and we didn’t even care about championships. We just wanted to play. We tried to get other girls from Michigan to play 7s or 10s. But it was frustrating. It became this, ‘Are we ever going to play rugby in high school again?’”

“It’s what we needed,” Cowdrey said. “The Adrian 7s tournament was the first one we ever won and that brought our spirits up, too. We were super excited for this season.”

The team never stopped recruiting and reinforced its fall numbers by attending five different school orientations to stoke interest in rugby. The team rostered 28 players from seven schools, and senior co-captains Cowdrey and Chaleigh Kutzli were charged with uniting the diverse squad. They have been the team’s starting scrumhalf and flyhalf, respectively, for four years, and they rely on the experiences they had as freshmen to shape their mindset.

“My freshman year coming in, I was nervous because I didn’t know many people and there were a lot of seniors,” said Cowdrey, who started playing rugby in middle school with the Sparta-Rock boys. “But they were very welcoming and it set the base. We won states that year [2018] and seeing how those captains – Darby [Eck] and Sarina [Gerke] – led everyone, it was, ‘I want to be that person as a senior – be welcoming and build that rugby family.’ Both Chaleigh and I, we still think of it that way.”

Juniors Charlotte Dauser and Abby Zurek were also voted in as captains. Traditionally, the team has 1-2 captains, but the team voted in a four-way tie (Cowdrey had one more vote).

With that leadership and the experiences of the past year, Dauser noted a richer team bond this fall. It’s difficult when the players don’t see each other during the school day, but a focus on acceptance has seen players arrive early to and stay late after practice to hang out, and on the weekends, those who drive hours to training get picked up for team events.

Sparta-Rock was the healthiest program this season, and it’s reflected in the team’s wins against Rugby Michigan opponents. The team’s newcomers were able to develop and get lots of field time, and talent emerged.

“Regan Vander Heide moved here from Wisconsin and just started in the spring,” Dauser said of the junior center. “She’s a really smart, super-athletic player. Great at drawing the defense in and passing the ball out of contact. She’ll be a stud. And she recruited Clara Bremer, a junior who started at flanker for us. She really excelled and puts a lot of effort into her defense. Takes pride in her tackles. [In the state final], she started to explode with her offensive skills. She’s probably one of the most improved players this year.”

The coach also noted that first-year players Kaileigh Anderson and Payton Zittel are being courted by college coaches.

In the final week of regular-season play, the team lined up against reigning state champion Grandville.

“Grandville is our rivalry, so it was very nerve racking going into it, but once we started scoring, we had high hopes,” Cowdrey said.

“Not to be arrogant, but we knew we were the only team who put in the off-season effort during Covid,” Dauser added. “We didn’t have a season but we raised our skill set. Once we started playing against Grandville, and the result that we saw, it brought the team together even more. We have nine freshmen on the team and they were pumped, especially after first hearing horror stories [against Grandville] from the last few years and being nervous. In the end, the skills took over.”

The 47-5 win provided the confidence the team needed heading into the state championship, a rematch against Grandville. Last Sunday also featured a third-place match between Grand Haven and Berkley (Grand Haven won 28-0), and an opportunity for Lakeview to have a 10s game – it’s first competition of the fall.

“We worked really hard during the two weeks until we played them again,” Cowdrey said of the rematch. “We had that mentality that we’re the best and that the only people we had to beat was ourselves.”

“Our motto is: Always be improving,” Dauser said. “In the first game against Grandville, they tried to do too much and didn’t let the play come to them. Fancy offloads or trying to run through everyone and do everything individually. The teamwork in the final was amazing to watch. They knew when to offload or pass and communicated on attack. And the tackling on defense was very good. Grandville was inside our 20 for five minutes and we didn’t give any points up.”

Coach Dauser called out Elia Jenkins and Charlotte Dauser for setting the tone defensively. Fellow junior captain Zurek earned high praise from Cowdrey, who highlighted the prop’s ability to truck through everyone.

“They get it done,” the scrumhalf said of the forwards leaders. “They run the plays and make sure everyone in the forwards are set. They teach them everything in the rucks and the scrums.”

Kutzli marshalled the back line and set up her teammates for scoring opportunities.

“She is my flyhalf. I give her the ball and she is a great leader,” Cowdrey said. “She tells everyone what to do and reads where the ball needs to go. She’s an athlete and plays other sports. She just runs the game.

“Lily Nowak had the best game of her whole season,” the scrumhalf continued. “She was just running through everyone. She’s fast and reads the field well, and she’s one of the nicest, super supportive people. She’s usually very unselfish with the ball but we told her to be selfish and she did and scored.”

Bremer also looked good. The rookie started every game, and, “She one of those girls who, if I was on the other team, I’m backing away from her,” Cowdrey said. “She’s fast and has low tackles around the ankles. She strips the ball. She knew what she was doing within the first week of playing and really stood out.”

“It was definitely our best performance of the season,” Dauser said. “It was an awesome effort from the whole team the whole week. Sometimes you get to practice and it’s hard to get the girls focused. You wonder how you’re supposed to motivate them. But they were dialed in this week.”

The title was truly special for Cowdrey and Kutzli, who are the only remaining players from the 2018 championship team. They both missed their sophomore years to injury, and then Covid-19 took their junior season. The team wanted to win for them and gave them their all.

“It hasn’t really hit me yet,” Cowdrey said. “It’s surreal because we could have had more championships [the past two years]. Everyone pushed harder this season, especially a lot of girls who were super, ‘Let’s do it for our seniors. They’ve had so much taken away.’”

Dauser explained that Cowdrey and Kutzli are the only two Sparta-Rock players who have two state championships to their credit. The Sparta boys have around for 12 years and the Rockford boys were established in 1998. The girls have been playing for nine seasons.

“It was super special for them, and the team,” Dauser said.

The seniors aren’t done yet and want to continue with 7s in the spring, ideally returning to Tropical 7s. Recruitment is going to pick up, as many players are multi-sport athletes, and there will be a push to attend the Midwest High School 15s Championship in April.

“They know they have a special team and want to keep playing,” Dauser closed.