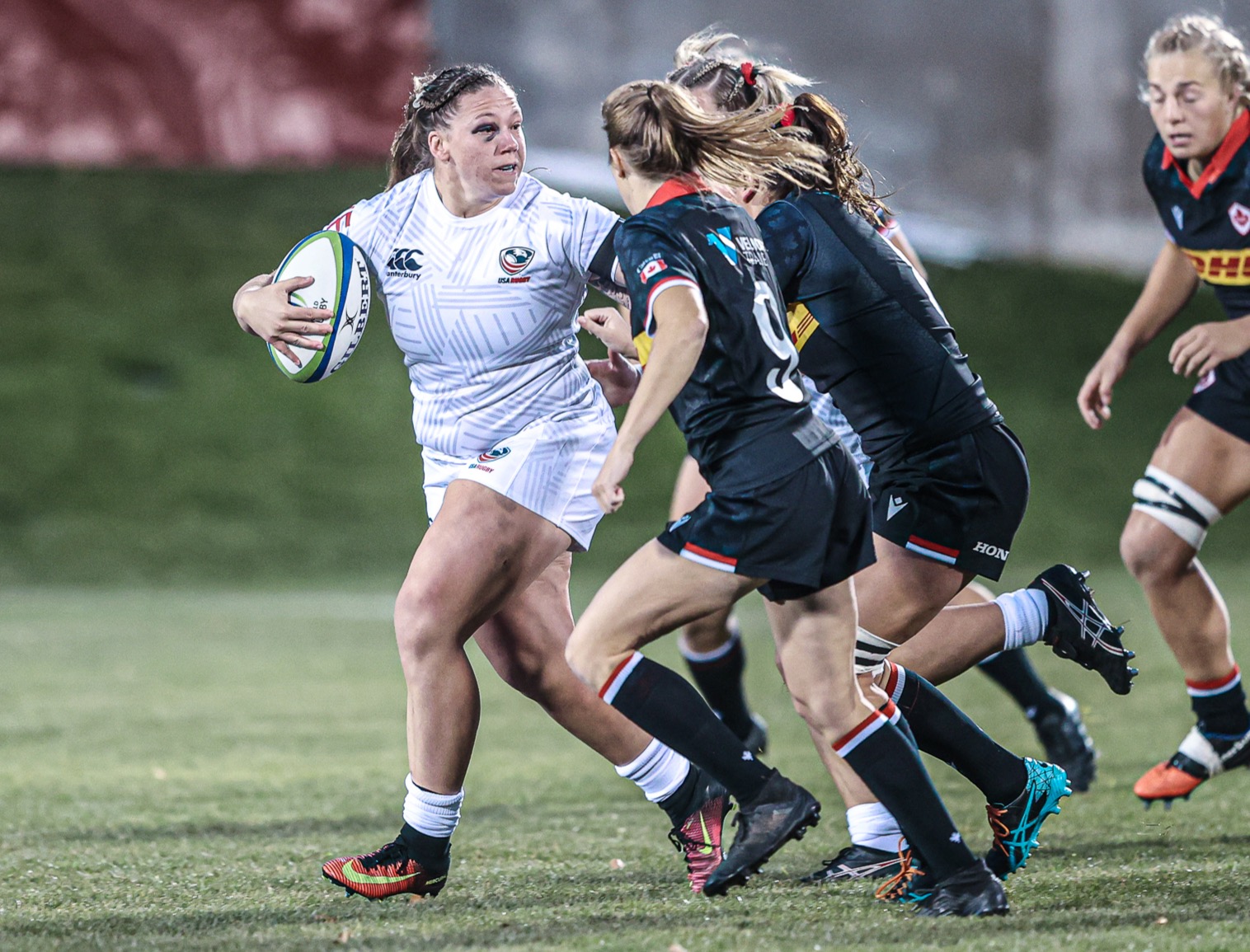 The USA and Canada met for the first of two Pacific Four tests inside Infinity Park in Glendale, Colo. The game marked both teams’ first international match since November 2019, when Canada was last in the U.S. The visitors won 15-9 and will contest the rematch on Friday, Nov. 5.

Overall, the game was pretty choppy, as one might expect. There were a lot of stoppages and missed connections and penalties, and it was tough to get a real feel for both teams. That said, Canada was more threatening in space and its set pieces were more consistent, but Canada did struggle with penalties, especially when under pressure in their own end.

The game started in a compelling fashion. Jenny Kronish gathered the kickoff and Hope Rogers just blew up the defensive line. A couple of tight passes to Rachel Johnson and Carly Waters kept the drive going before Canada could regather itself on defense. Throughout the game, those little pop passes back inside saw some success is evading that on-rushing defense, but they also suffered from timing issues and produced knock-ons and intercepts. Canada was far from perfect as well, and the Americans were able to pick off hurried passes in traffic.

The first seven or so minutes were spent in Canada’s end, but the USA wasn’t able to turn the possession into points. An offsides penalty at the lineout allowed Alex Tessier to punt the ball down-field and restage play in the U.S.’s end. The flyhalf was a very good field marshal and managed the kicking game alongside fullback Emily Belchos, who could find the hole while on the run.

It was about this time that Canada flexed its capabilities for running rugby, taking the ball at pace and working options out wide. A Kate Zackary-forced knock-on ended that drive and a penalty in the scrum allowed the release of some pressure, but Canada would be back.

Just as Tessier and Belchos worked the Canadian kicking campaign, Megan Foster and McKenzie Hawkins were equally effective off the boot. Foster handled the penalty kicks to touch and kicks off the tee. The flyhalf went 3-4 on penalty attempts and made just one error when clearing lines. Hawkins has been seen at flyhalf and center in previous tests but is a nice fit at fullback. Plus, the 15 planted a couple of lovely 50-22s that put the U.S. in good attacking position.

Approximately 15 minutes into the match, Canada incurred a not-rolling-away penalty, allowing Foster to kick to touch for a USA lineout on the 22. The subsequent maul then moved to center Gabby Cantorna crashing back inside. Canada got over the ball quickly to draw a penalty and then immediately tapped through the mark, hoping to catch the USA off guard. It worked and fast rugby followed. Phases later, the visitors had built an overload in the backs, and Tessier wisely sent a skip pass to debutant Renee Gonzalez – a former USA U18 player – to push off her opposite wing for the try, 5-0.

The USA came right back. Foster sent the restart 10 meters and flanker Rachel Ehrecke came flying up in defense to force the knock-on. After the USA scrum, Canada coughed up a no-clear-release penalty near its 38 meter, and Foster decided to have a go. A nice, strong kick followed, and the USA trailed 5-3 after 20 minutes.

Foster had another shot at goal about 10 minutes later, but it went just wide right. The opportunity came after the flyhalf blocked a Tessier kick and Johnson hustled after the loose ball. Tessier recovered the ball but Foster was over the top for the not-releasing penalty.

As the half wore down, Canada came out on top of a kicking exchange, sending a fast chase after a ball booted to Tess Feury. The wing fielded the ball just fine but didn’t have the support in the tackle. From that penalty and subsequent lineout, Canada launched at least 10 phases at the goal line, hammering mostly through its forwards but also mixing in a backs’ jab to keep the defense honest. Finally, though, flanker Karen Paquin took the ball in some space, and dummied past the defense for the dive-over try. Reserve lock Sophie De Goode added the extras: 12-3.

The USA was lucky to end the half when it did. Canada was driving a lineout maul to the try line when captain Zackary ripped the ball out of the ballcarrier’s hands. The ball knocked forward and that ended the first stanza.

When the teams returned to the pitch, the game again started well for the Americans. Zackary did a great job of running onto a Tessier clear and Canada gave up an offsides penalty in Foster’s range. The flyhalf added another three points about three minutes into the second half: 12-6 Canada.

The scrums really struggled in the second half. Center ref Julianne Zussman continually blew up the set piece asking for more space and supporting one’s body weight. Canada captain Olivia Demerchant was a repeat offender in the front row, but as the half wore on, Canada was able to disrupt the Americans’ scrum with more success. Overall, this is where the game really slowed down.

The USA backs didn’t get much play. Cantorna had a couple of opportunities to crash, but little was seen from Alev Kelter and the back three in terms of attack. The crowd erupted when reserve wing Ilona Maher touched the ball for the first and only time during the game. Perhaps the most exciting attack occurred midway through the second half. Rogers, Alycia Washington and Johnson were linking well through contact, and although there were some hot-potato moments, it was enough to keep the Canada defense moving. The effort nearly ended with five points but the frenetic pace saw the finishing pass to Levy go just-forward.

The USA kept pushing and keeping up the pressure, but unsuccessful lineout throws were really starting to hamper the team’s momentum. Canada would be penalized, Foster would send a nice kick to touch, and then the lineout ball would sail over the back jumper. Tessier kicked away, Levy recovered well, and then a flat pass from Washington to Rogers saw the prop power forward. Again, Canada gave up a not-rolling penalty and Zussman advised Canada that it needed to change its behavior.

That error occurred near Canada’s 25 meter, so Foster turned it into three points: 12-9 to Canada.

Two minutes later, Canada restored the point differential. A knock-on in the tackle and then scrum penalty allowed De Goode to slot three points from inside the 22: 15-9 to Canada.

The final 10 minutes were tense. The USA needed a converted try to win and had the opportunity to do so. On one occasion, the ball was passed back into the 22 and Tessier, who kicked the ball straight out. Play returned to Canada’s 22, and after a USA lineout and favorable penalty, the Eagles deployed their forwards at the line. Maybe a pass or two moved away from the pile, but there wasn’t an earnest attempt to move the ball too far away from the pack. Maya Learned was the last forward to try and get over the line, but Tessier got under the ball and the held-up try turned into a goal-line dropkick for Canada.

In the end, Canada’s defense held and closed out a 15-9 win. More importantly, both teams have a benchmark of where they’re at and can hone in on work-ons from there. Expect the rematch to feature teams that are eager to make improvements during this precious week.