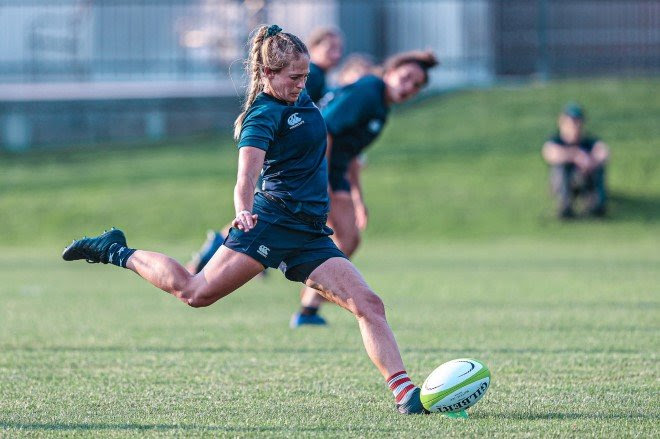 GLENDALE, CO – Head Coach Rob Cain has named his match-day roster as the Women’s Eagles play Canada in their first test match in two years this Monday, November 1 at Infinity Park in Glendale, CO. The match takes place as part of World Rugby’s Pacific Four Regional Series and will be dedicated to the memory of former Captain and Head Coach Kathy Flores who passed away last week.

In memory of Flores, players will wear the initials “KF” on their jerseys, as well as black armbands to honor the legacy of an American rugby great. A moment of silence will be held at pregame, followed by a special tribute video at halftime.

Fans are also encouraged to help further Flores’ legacy via her memorial fund which aims to provide financial resources and support to grow the game. Contributions can be made at usarug.by/KFLORES.

Flores led the USA Women’s Eagles to their inaugural World Cup victory in 1991 and served as Head Coach of the Eagles through the 2006 and 2010 World Cups. She dedicated her career to paving the way for women in rugby as she continued to lead the next generation as Head Coach at Brown University.

“First and foremost, as a group we want to pass our deepest condolences to Kathy Flores’ family. Her loss is being felt across the whole of the women’s rugby landscape both in America and overseas, showing the reach of her legacy as a player, captain, coach, leader and person. All our thoughts continue to be with you.

“It’s been a really positive four days. The energy, excitement, effort and level of detail in the small talk is great to see. A lot of hard work has gone on between our enforced departure from test match rugby. Two years is a long time between games so we are extremely grateful to be back playing.

“As support staff, we are excited for these players to express themselves against a very talented, physical and dangerous Canada team, taking another step towards where we want to be at the World Cup. It’s great to start our journey back from the wilderness with such a historical rivalry.

“We are so excited we have this opportunity to start our tour at home in Glendale, to both play for and in front of the USA Rugby community. Thank you to everyone that continues to support the players on their journey to Rugby World Cup.”

Ranked No. 6 in the world, the USA Women will face No. 3 Canada for the first time since November 2019 when both teams played their last test matches before COVID-19. Monday’s fixture gives fans a glimpse of what they’ll see next year at Rugby World Cup as both teams are set to meet in the Pool B finale in New Zealand.

While Colorado altitude may be unfamiliar to the Canadians, the USA Women have grown accustomed to such conditions through multiple 6-8 week Daily Training Environments held in Glendale during the absence of international play. Conditions aside, fans can expect an exciting and intense matchup as both teams go head-to-head to kick off the Autumn Internationals.