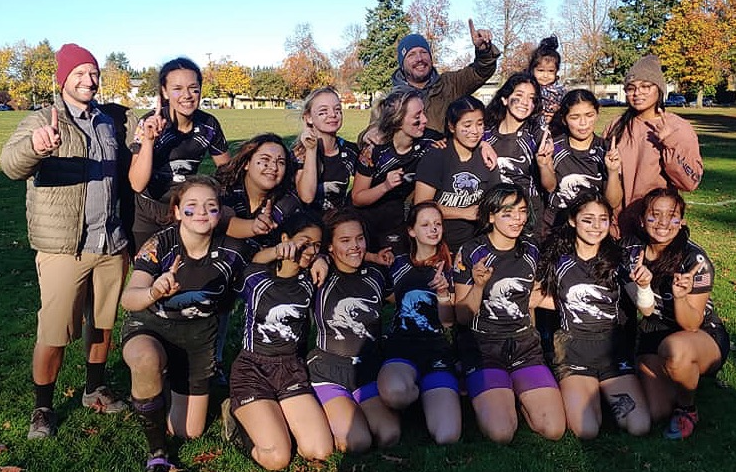 Oregon was one of the last states to return to play during the Covid-19 era, but a summer 7s series got players moving again. The Valley Panthers had struggled with numbers but then landed a coach that helped with stability and improvement. The team then went 13-0-1 en route to the Rugby Oregon Fall 7s Championship, building some nice go-forward for the spring and beyond.

Mike Fair moved to Oregon in 2019 and then joined McMinnville High School as an alternative-education teacher in September 2020. It’s a program and position that evolved out of Covid-19, and focuses on credit-recovery work and some independent study. Fair has coached rock climbing, surfing and baseball teams, and started playing his passion sport, rugby, in college. He wanted to coach high school rugby, and then serendipity intervened. Valley Panthers co-captain Anika Strickland e-mailed Fair for his interest in potentially taking over the team, and the timing couldn’t have been more perfect.

“They were pretty organized,” Fair said of the state of the team when he arrived. “There was a good core group of seniors who had been playing together for 3-4 years. … I didn’t have too much background on the team, but on campus, when you look at the trophy case, it looks like they’ve been pretty good for 4-5 years. I inherited something there.”

A good support crew helped Fair and the team get oriented for the fall. Alumna Itzel George-Murguia served as a valuable assistant coach, and former staffers and players also attended training sessions. Riley Yoder got Fair situated within Rugby Oregon.

Fourteen players signed on for the fall, but senior Allyson Martino was injured for the whole season. McMinnville High School provides the majority of the Valley Panthers squad, and 8th grader Britta Strickland joined the team during practices. Leading the way were co-captains Anika Strickland and Alexus Flores Martínez lead the team.

“Alexus is our scrumhalf, and a smart, solid, strong player,” Fair said. “We have a lot of strong players actually.”

Senior Makayla Huber is one of them. Fair described the all-star as short, feisty and the team’s best tackler.

“She’s one of the few players who’s not afraid to tackle anybody,” Fair said. “There’s free subbing and we do have a lot of new players, so everyone’s getting minutes. But when we need an injection of intensity, or we’re up by one try and need defense, I’ll put her back in if she’s not already playing.”

Merary Ulloa hails from Newberg, but prefers to play with Valley. The junior is a future captain.

“She is definitely another team leader who can do it all,” Fair said. “As my old coach used to say, she’s got a good top-six inches – good rugby IQ. The girls have issues reading the field and seeing space – they don’t have that skill yet – but Merary is better at that. She probably played the most minutes for us all season. When Alexus got hurt in the third week, she stepped in at scrumhalf and was great.”

Zamira Sanchez Rivera plays hooker but is more of a back-three in 15s. She along with back Bianca Weiser bring good speed to the pitch. Sophomore Grace Barnes is a solid tackler and ballcarrier, and will be a future leader for the team. Same goes for sophomore Mia George, who plays prop in 7s but will also be more of a wing in 15s. Freshman Aaliyah Resendez has a ton of promise and a great engine, and Jade Andrade is also on the positive end of the potential spectrum, bringing speed and a good step to the attack. Jordanna Hoke’s hands caught Fair’s attention immediately, and the young player has shown some deceptive speed around the corner.

The players developed over the course of a five-week Rugby Oregon 7s season, which occurred entirely in October. Standings were maintained for each event and was the vehicle for naming the fall 7s champion.

“From day one, their goal was to win the championship,” Fair said. “As the weeks went by and they weren’t losing, it became, ‘We want to go undefeated.’ That’s their goal but as a coach I don’t focus on that. That all comes as a product of hard work and a little luck. The ball’s got to bounce your way and you have to get the call sometimes. They added goals, like not giving up any tries, and that was the goal this weekend.”

Valley started the season strongly, and then the rest of the field started to hit its form mid-season. East Country/Grackles tied Valley 19-19 in week two, and Salem was always a good test.

“We prepared for every team the same,” Fair said. “We never approached a game like, ‘We can get away with this or that.’ I always preach respect for your opponent and to never underestimate anyone. Never be overconfident.”

Valley was 10-0-1 heading into the fifth and final tournament last Saturday. Salem was 7-3-1 and in second place. If Valley lost all three games on Saturday, and Salem won all of its games, then the Snapping Turtles would be crowned champions. The two teams met each other in the first round Saturday.

“It was really apparent that the other teams had gotten better, and they gave us everything they had,” Fair said. “Salem played us tough, and you have to give them credit because they prepared for us really well. It came down to the wire. It was four tries to three, but we made more conversions.”

Valley beat Salem 26-17, essentially guaranteeing the championship title, but the post-game reaction wasn’t one of elation.

“It was mixed because it was a really hard-fought game and we were a little beat up,” Fair said. “We lost Makayla [to injury] in the 11th, 12th minute of that game. Our defense was really unorganized and I let them know about it at halftime. Everyone was wiped, but the girls didn’t seem satisfied and they treated the next two games as important as the first one.”

“They were happy at the end of the day,” Fair said. “It was cool. During the season, we had the occasional easy practice but that’s not how it usually went. They worked hard and it was great to see them achieve this.”

The team will now see each other in Mr. Fair’s classroom on Fridays, when players can eat lunch together and review film. They stopped by on Monday to watch their championship footage and already started talking about plans for the off-season. Fair will facilitate any lifting or conditioning that the team wants, but it won’t be required in any way. Talks about recruitment and the spring 15s season have already begun, as well.

“I’m kind of in disbelief,” Fair reflected on the success of the last eight weeks. “It’s been great. How can I complain?”