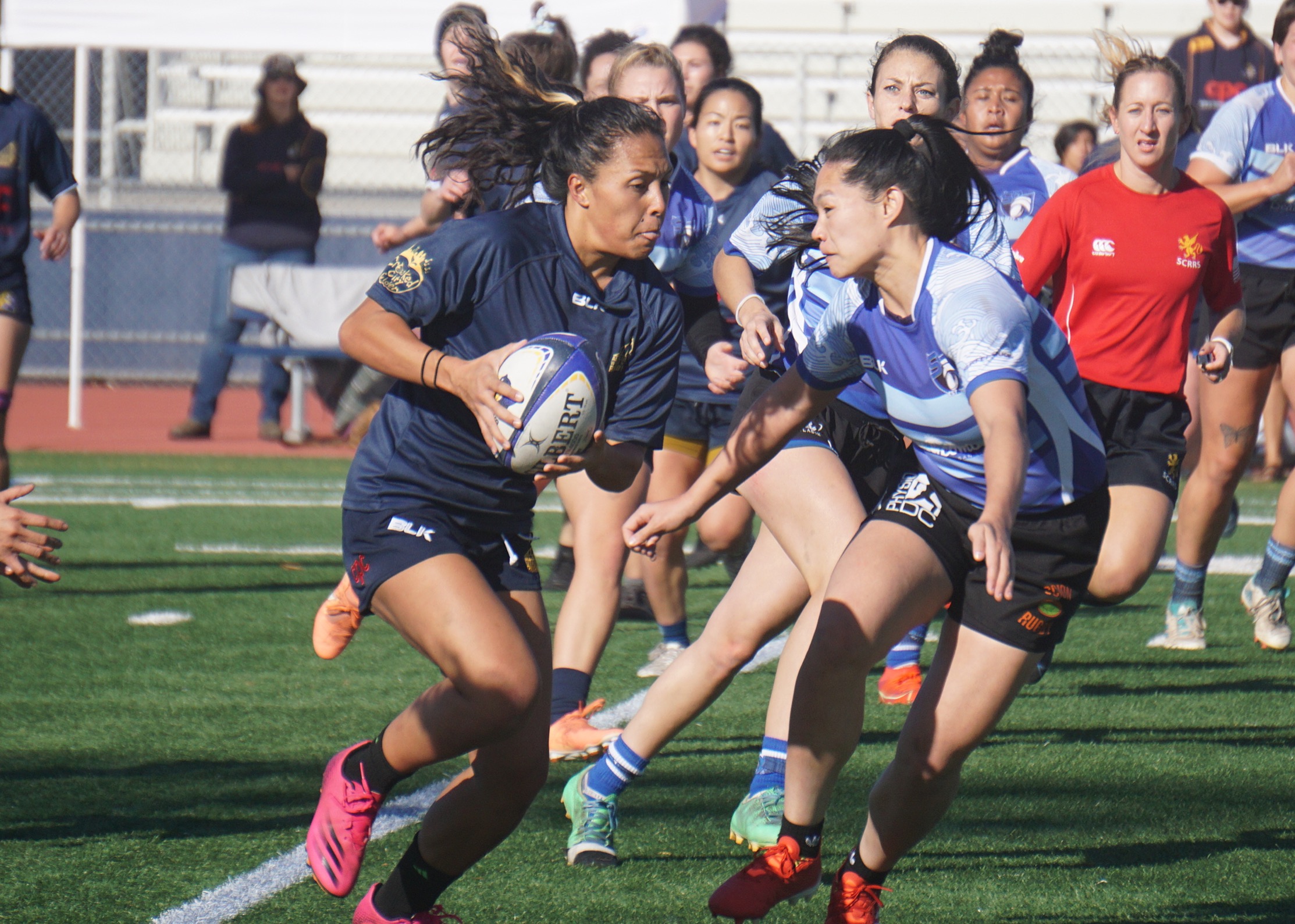 The San Diego Surfers ended their fall 2021 season with a trip to San Jose to face the Berkeley All Blues. The visitors faced some obstacles before kickoff – like canceled flights and impromptu road trips – while the home side had former head coach Kathy Flores, who passed away last week, in their hearts. A solid, competitive match that featured Women’s Premier League (WPL) vets alongside newcomers evolved, and the All Blues won 33-20.

“It was definitely a weird week, especially because a lot of our players were coached by her,” Berkeley captain Hope Cooper said of Flores’ passing. “We had talked about having a moment of silence at the beginning of the game and wanted to play the game for her, because she’s been such a big part of the All Blues. She was definitely top of mind.”

Berkeley honored Flores well, focusing on a few key points that built toward a win. 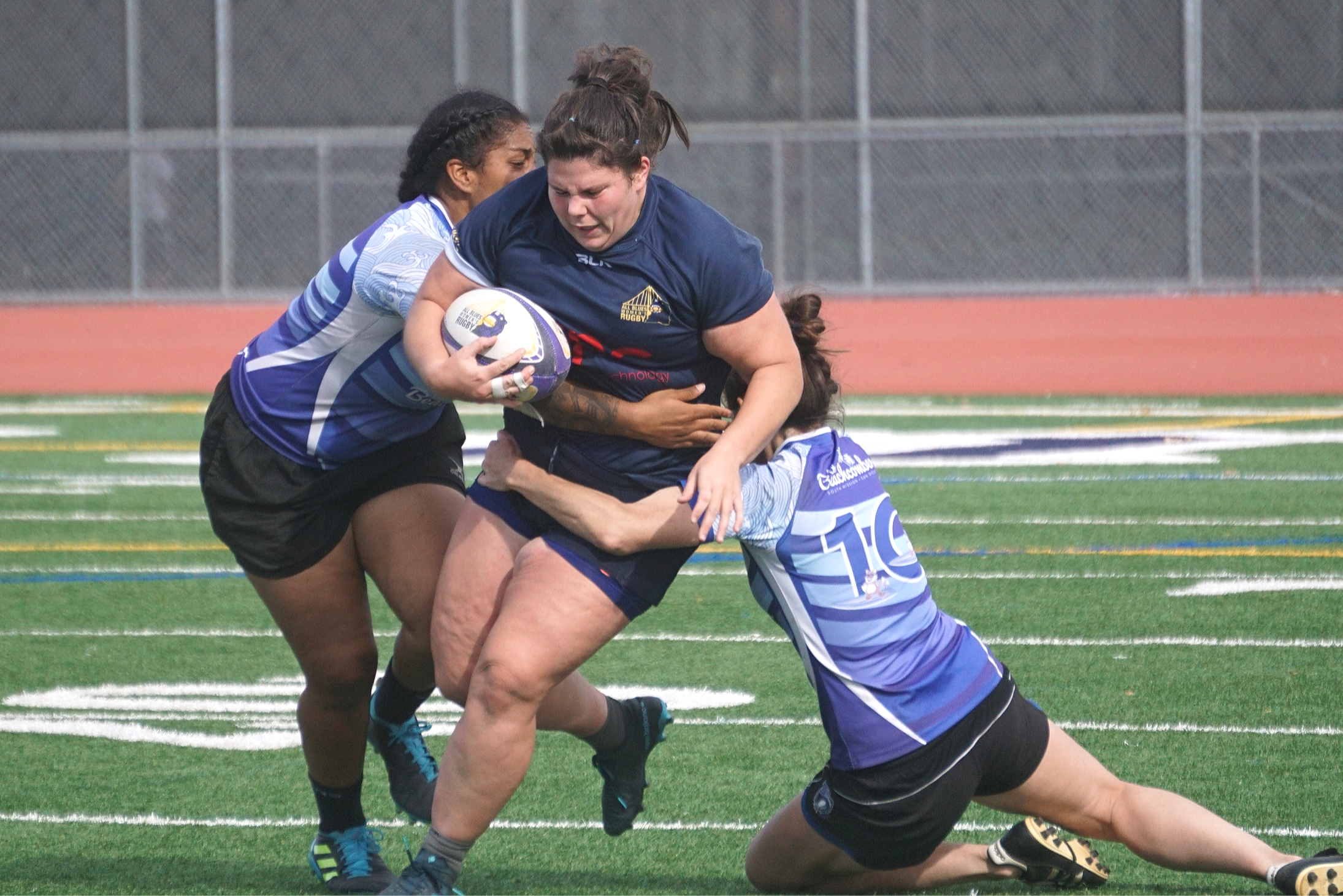 “Defensively, it was our first three steps up. We’re coming together and then we’re not letting anything come in from the inside,” Cooper reviewed the day’s primary objectives. “We watched a little San Diego film and they like to hit that ball right back in and we wanted to shut that down. … Hannah [Stolba] is really big on strategic play, so in the first 20 minutes, we really wanted to test them offensively, right off our 10 with our pods and try to get them sucked in. And then we were going to flush them out the last 20 of the first half, and then the last 40 we were going to start hitting them outside of that third defender.”

San Diego arrived with work-ons as well. The team played a decent fall schedule thanks to the hard work of match secretary Jaime Albarelli, and it was all culminating for the final two games of the season against WPL teams. On Oct. 16, San Diego dropped a 46-23 contest to visiting Life West, and although that game didn’t necessarily benchmark where the team is today, the WPL competition provided a point from which to grow. 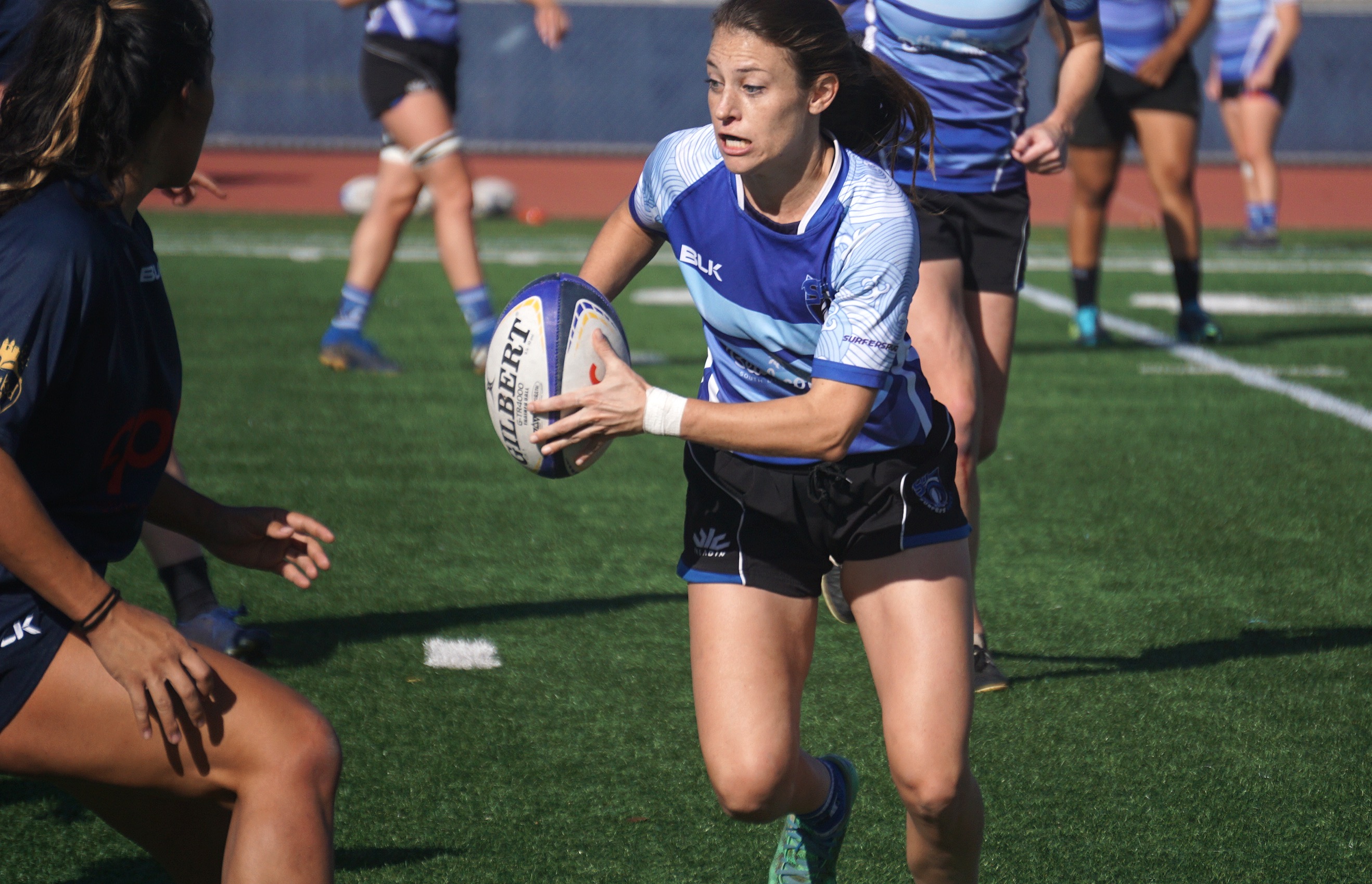 “I wish the scoreline was different, but we did have some players out, including our co-captain, who got injured in the second game of the season,” Griendling said. “She’s a powerhouse otherwise and a talisman for the team. Great attitude, great motivation, so we’ve definitely felt a difference without her out here.

“Life West was tough, but I was really impressed with the energy and commitment we showed through the entire game,” the flyhalf continued. “There’s been a lot of progress from last season, and I like some of the new technique that [head coach] Jarrod [Faul] has put in, some of the new strategies.”

San Diego looked like it had an early edge when it stole a Berkeley scrum, but a couple of penalties allowed All Blues fullback Olivia Bernadel-Huey to make good ground with kicks to touch. The try-scorer was also good under the ball and connected well with the outside attack. 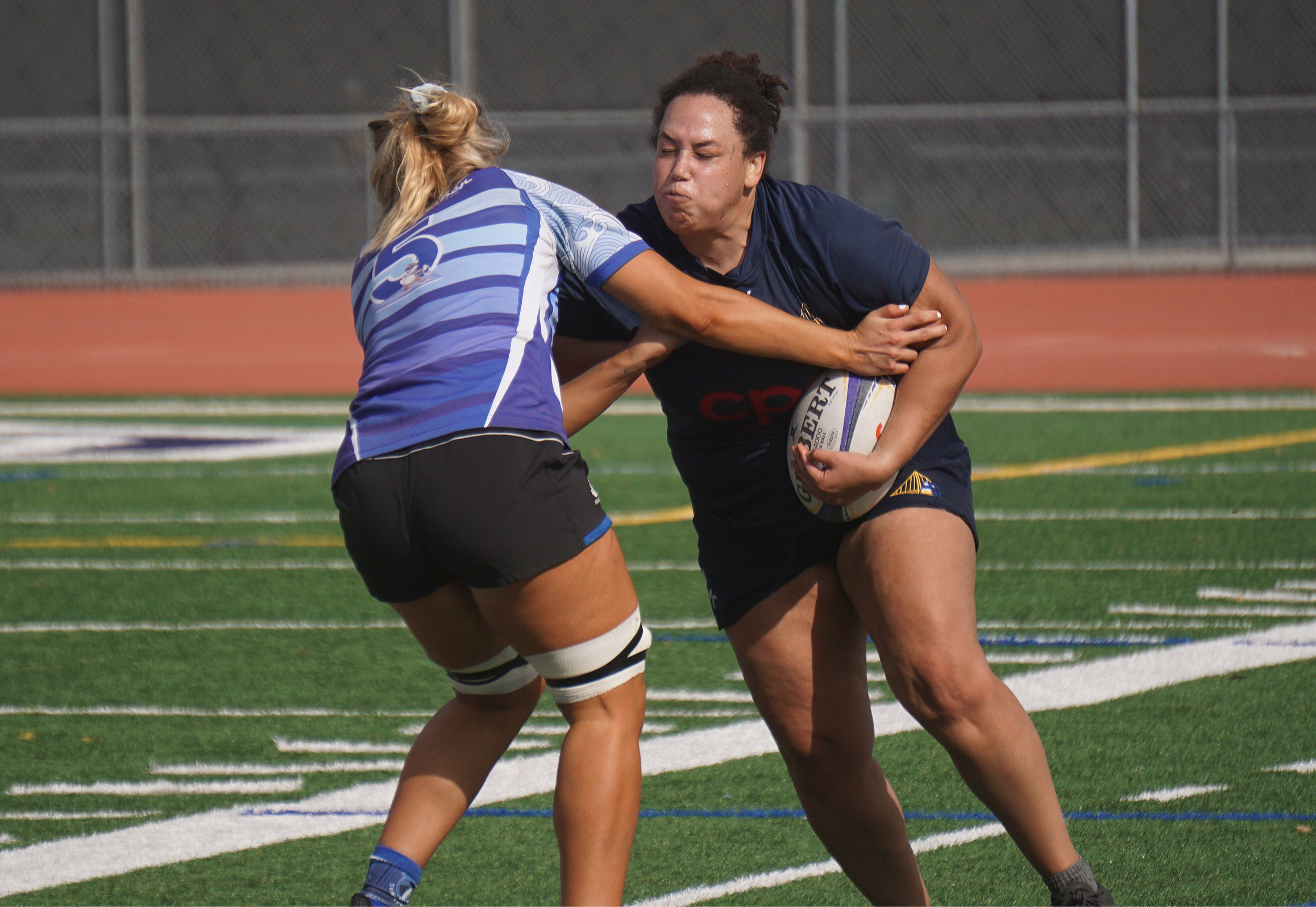 “Can Berkeley’s fullback not be allowed to kick anymore? Because that would be amazing,” Griendling laughed. “We’ve had a lot of success kicking so far this season and so I wanted to go to that well again, and after about the second kick today we realized that was not going to be a weakness that we could exploit. That’s absolutely a strength of theirs, so I think their fullback had an incredible game. Not only is she good on offense and defense, but she has a great kick for touch.”

Four minutes in, Berkeley prop Abby Vogel powered through the defense for the game-opening try, 5-0.

Both teams were able to force mistakes when defending inside their 10 meter, saving points off the scoreboard. Surfers like Evi Ashenbrucker, Bailey Johnson and Julia Buescher were particularly menacing, and wing Teigan MacDonald was very quick over the ball to draw not-releasing penalties. Berkeley had its double tackles down, and the slide worked very well, corralling several ballcarriers into touch. 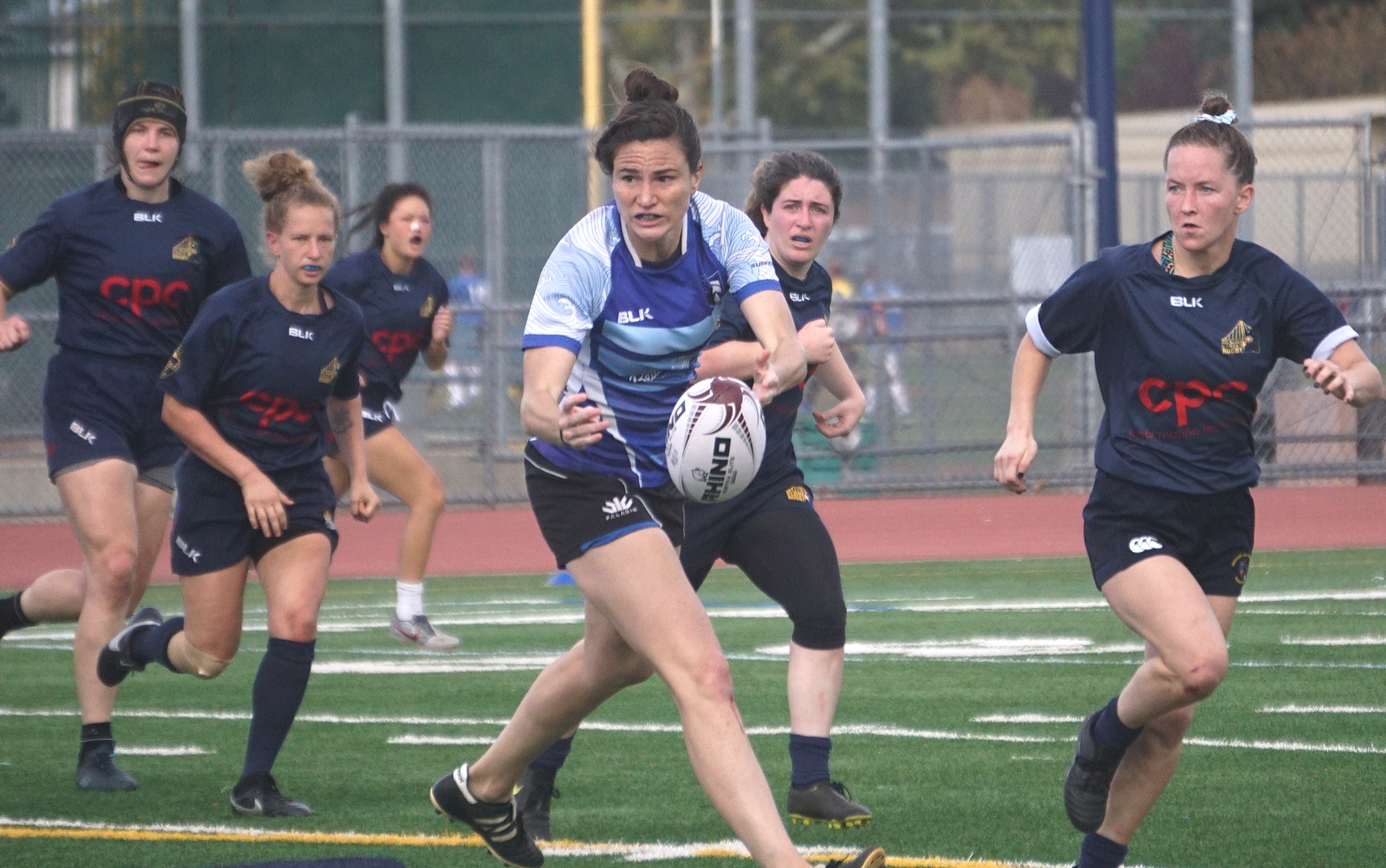 “Berkeley comes with a lot of speed on defense that we haven’t seen in some of our other games – so, really shooting up and closing the door outside in was something we hadn’t seen a ton of,” Griendling said. “I was impressed that we were able to adjust on the fly to that. In the past I’ve played on teams that have a system and they stick with that system. I’m really proud that we have incredibly smart, thinking forwards that can adjust quickly, and backs that are able to communicate and see pictures easily.”

But San Diego got its line-breaks, and flanker Kimdinh Tran was particularly successful. Cathy Cai, Nicole Burr and MacDonald also carried well. Fifteen minutes, the Surfers got on the board when Griendling read a soft pass for an intercept try, 5-all.

It was another 10 minutes before the tie broke, and in that time, players like Ceara “8 Foot” Lafferty stood out, literally, nabbing restarts and loose lineouts and always making the gain line. No. 8 Tyra Norlander was very good off the back of the scrum, and Beantown transfer Allie Martin did a good job filling in at flyhalf for an injury. 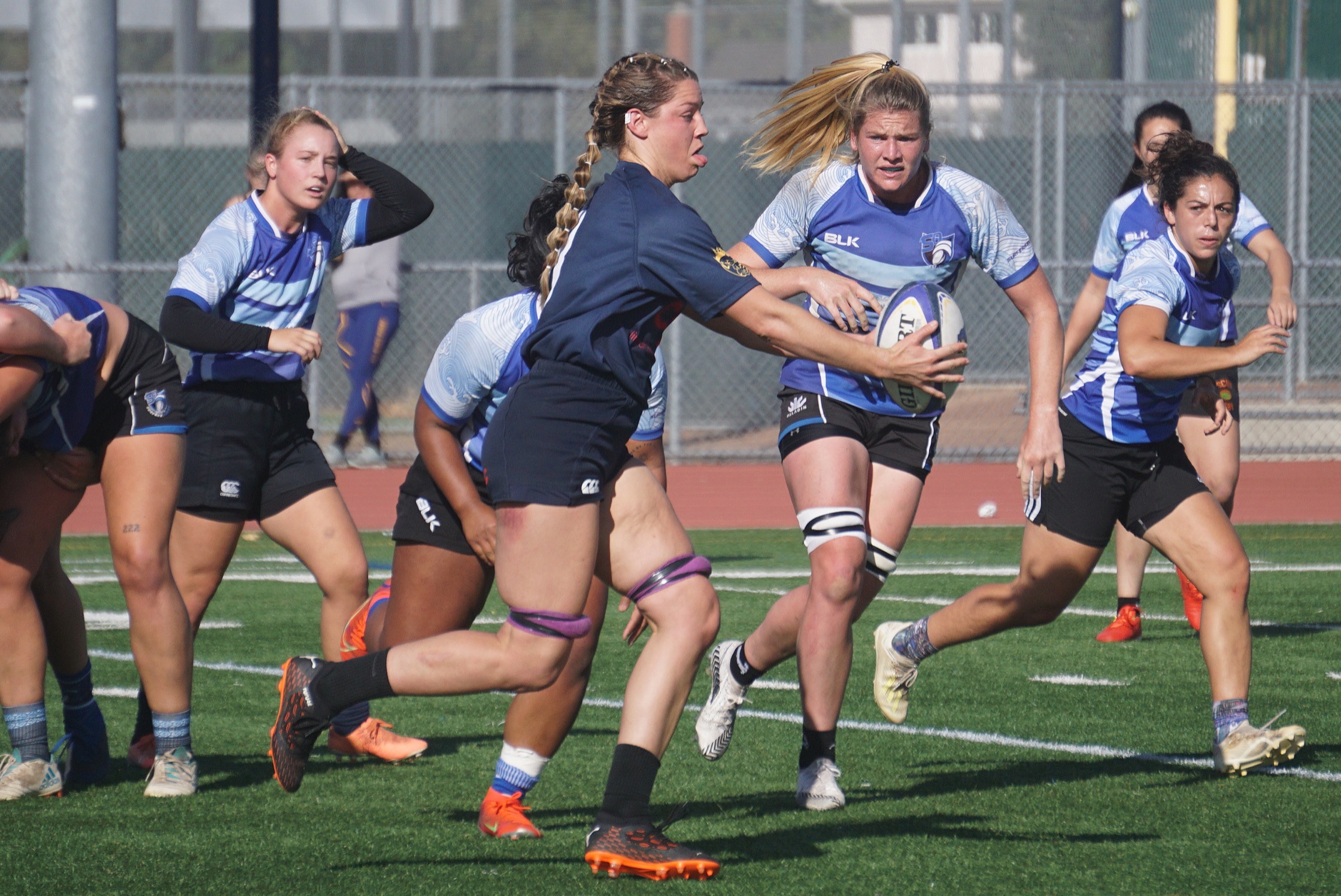 “A-Mart – is what we call her – did a fantastic job,” Cooper said. “She’s usually not one of our playmakers but we had some injuries and she stepped up at 10. She did a great job setting us up for success in our pods.

“And I’m always one for our forward pack,” the captain said of additional standouts. “I think we did a great job when we needed to do our fat balls – getting down on the five-meter line, just taking the ball and keeping possession until we could get the ball wide. We took care of it.” 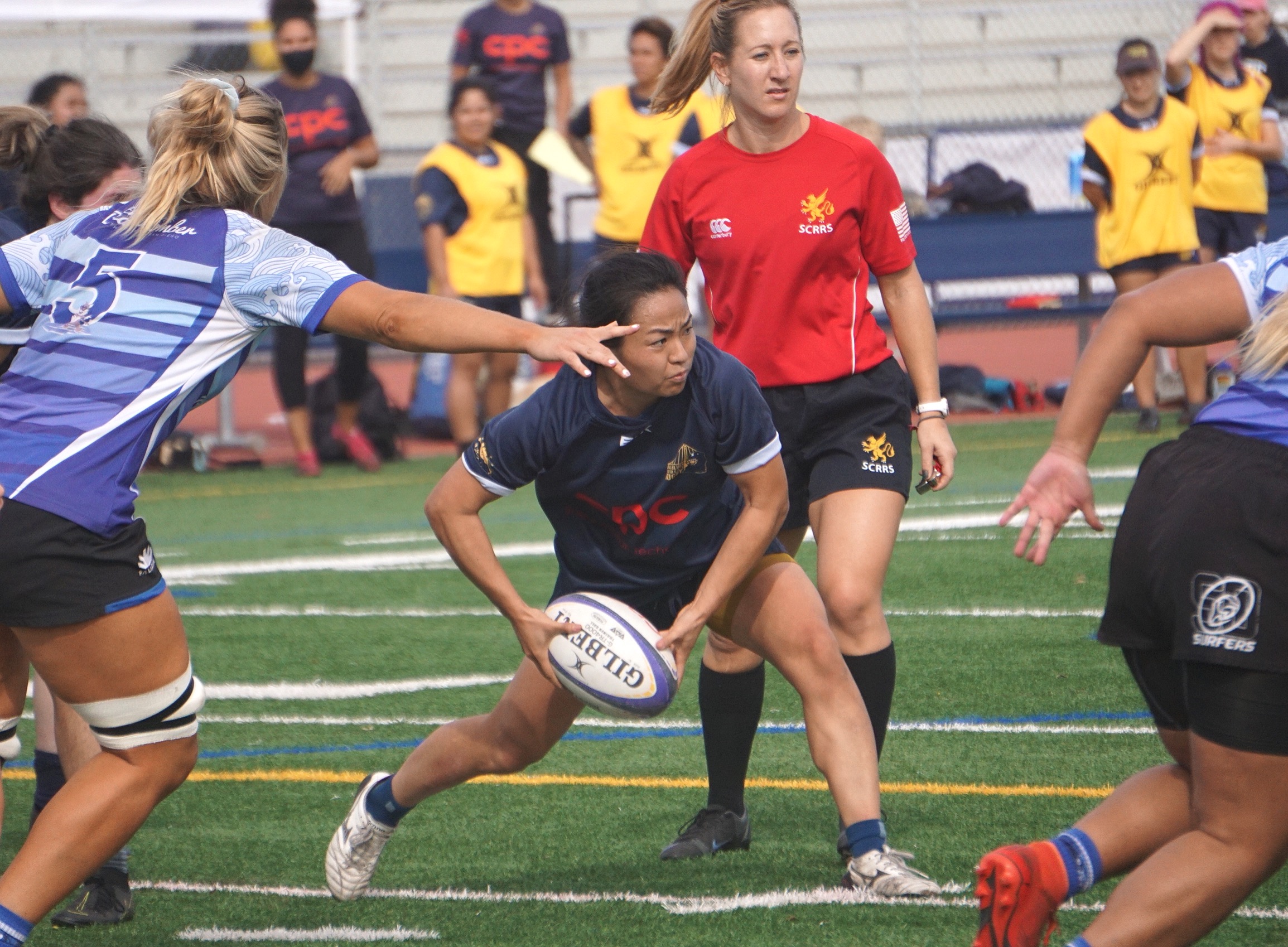 “I’d say our defensive launch and those first three steps – we’re getting there,” Cooper considered the team’s execution of its goals for this game. “We’re still working on getting ourselves in the r
ight places in terms of – should me and my prop be on the outside against their wings? No. But we still had that launch so the ball didn’t actually get all the way out there. Offensively, in terms of getting our spacing right, I think we made a lot of smart decisions. We’re just still working on a new system so there’s room for growth execution wise.”

San Diego kept working and turned opportunity into points. The Berkeley forwards went on a fast break out wide but the connecting pass was knocked on. S’rob Oberman-Breindel was there for the quick pick-up and went back and forth with MacDonald on the sideline. The ball then worked back to the middle and to No. 8 Ashenbrucker, who tore confidently into open space and pushed off the defense. Naomi Carrillo put in a brilliant chase and did make the pursuit tackle at the line, but Ashenbrucker was over for five. 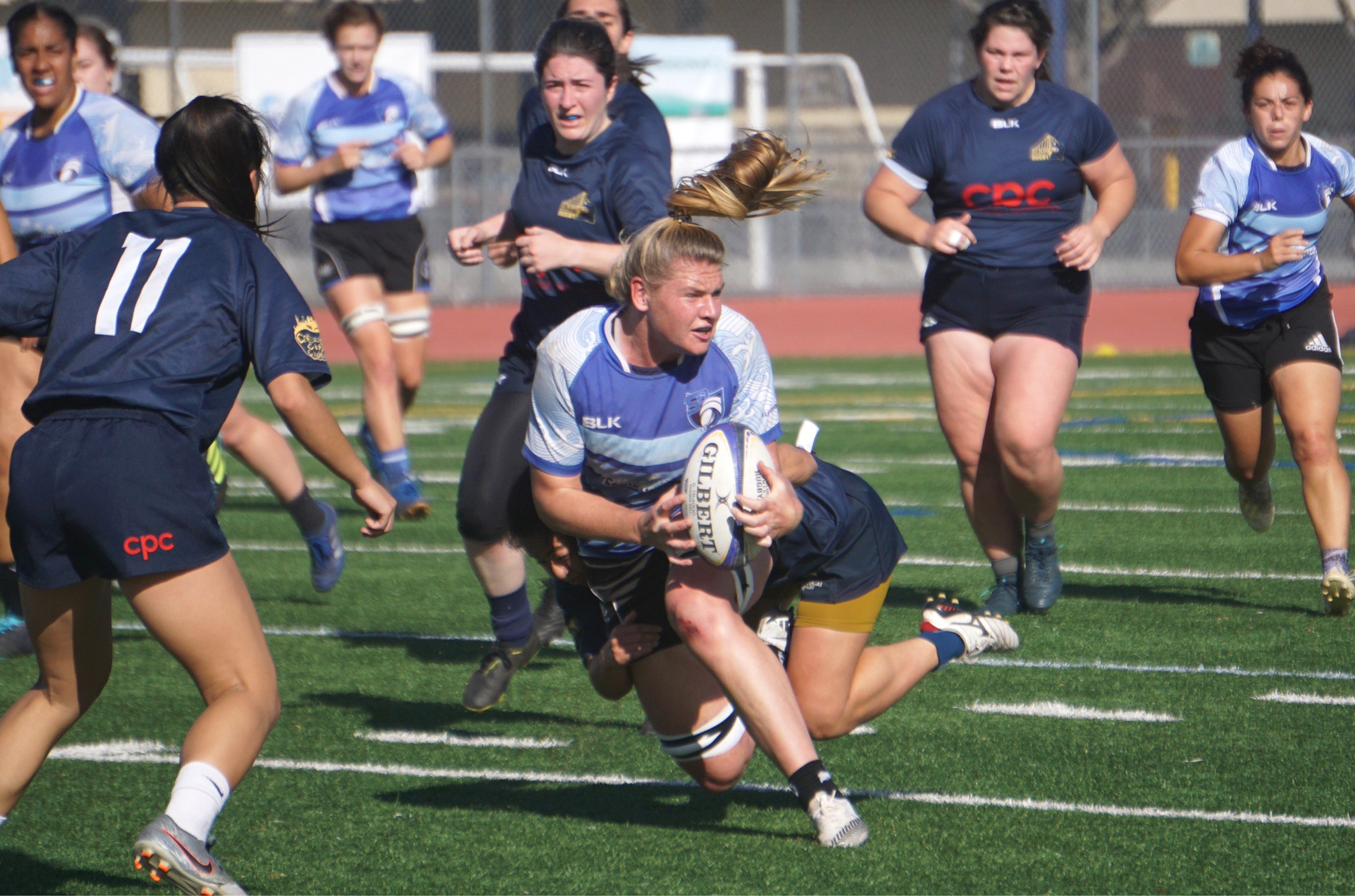 The Surfers added another try in the corner, and with approximately 12 minutes remaining, Berkeley led 26-15.

“We came in and took a deep breath and said, ‘We’re going to wash it. We’re going to recenter ourselves on what we’re focusing on for this game,’” Cooper said of regrouping. “On defense, we needed to make sure that we were connecting because we were getting too bunched – stuff like that. For us, we just try to come together and focus on 1-2 things and go. We don’t try to linger on it too long.”

The game ended with intercept tries from both sides: 33-20 the final to Berkeley.

“I can’t talk enough about Teigan,” Griendling said of San Diego standouts. “She’s absolutely a world-class player. She has always been a phenomenal athlete and over the last three years I can just see her rugby brain develop more and more. She’s part of our leadership group this year and has really stepped into that role. She’s a young player in her age but a vet in terms of how many years she’s been playing. … She’s a player who always has something you don’t expect in her bag of tricks. 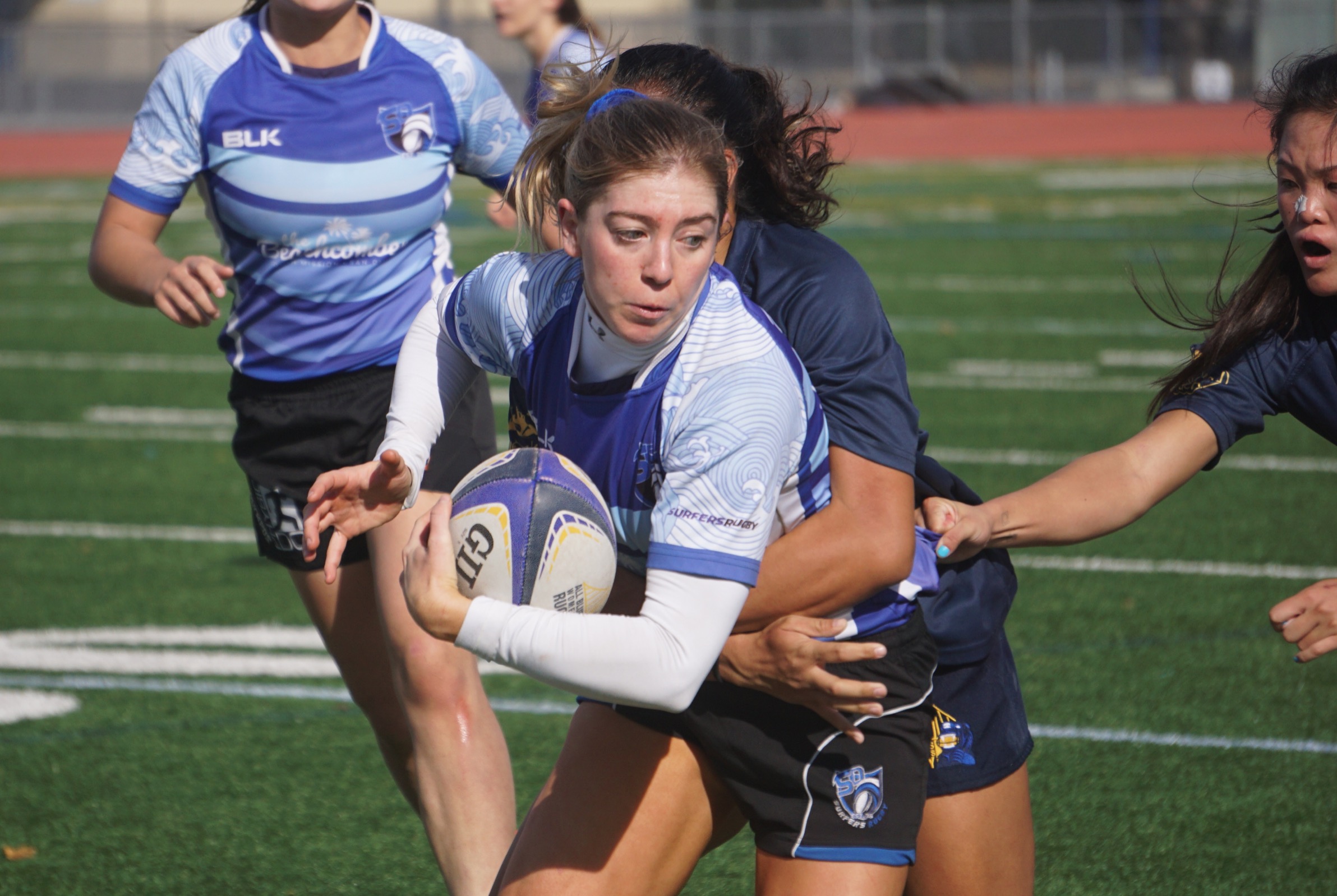 “I’m excited for next season and looking forward to the spring being competitive again,” Griendling looked ahead. “The young players are amazing. I’m so excited. Peyton [Boyd], our seven today, is a tremendous tackler and punches well above her weight, which is incredible. Cathy [Cai] isn’t new but is new to us. Power, incredible [communication], great tackling form, just really compliments our back line in the perfect way. We’ve also been moving a lot of our backs to forward positions, which has been really exciting, so seeing players like Sheree [Collins] come in and play flanker for us has also been exciting.”

Berkeley still has some season left, but the WPL developmental season is over for the year. Now the All Blues will place more focus on the DII side, which has league approaching in the new year. DI Tempe is slated to travel to the Bay Area, and Life West and EPA might appear on the calendar as well.