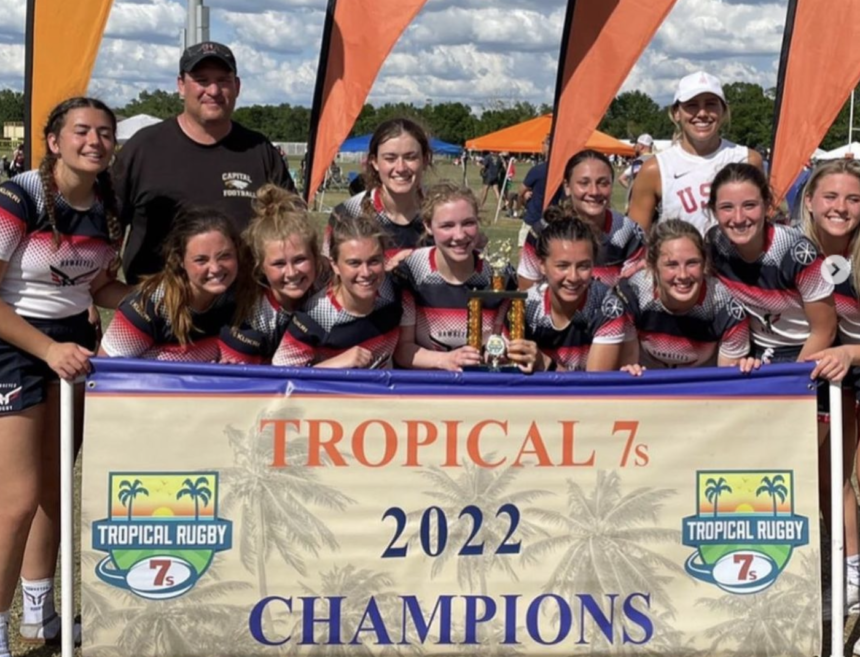 Press Release – The Hawkeyes Academy wasted no time making a splash in their first-ever rugby tournament entry with a dominant performance in the Tropical 7s U18 Girls Division. Former Eagles Olympic Captain Abby Gustaitis and Idaho coach Matt Jacobsen faced the daunting task of sorting 45 selected U18 players from all over North America into four teams. The end result saw the Hawkeyes lift the U18 trophy following a close victory over Sparta Rock.

“It was such a pleasure to coach these young women and watch them build into the tournament,” Gustaitis beamed. “They asked questions and were constantly seeking feedback and improvements. Their positivity, willingness to learn and great attitudes set this group apart. It would be a privilege to coach any and all of these women again and I imagine there are some future Eagles and Maple Leafs amongst them.”

“With so many talented new coaches and players on board, it was a pleasure to watch these young stars gel in two days and win a couple of championships. Having 12 teams entered over 10 divisions in a tourney was a first for us and this may have been the most talented coaching staff we’ve assembled to date,” said Wilton.

After successful talent ID camps in Idaho, Celina and Woodlands, Texas, players are getting good exposure to colleges and national team programs through the Hawkeyes Academy.

Bryn Carter of Meridian, Idaho had an outstanding tourney and has since received an invite to the upcoming U18 Eagles West Summer Camp in July.

“I had a great experience in Florida,” Carter said. “I met girls from Canada, Florida, Ohio, and even other girls from Idaho! It was incredible how we all played so well together after just meeting at the airport. It was amazing to have coach Abby there as a mentor and she lead us to victory.”

Eleven year-old Izzy Lalla of the Wellington Wizards was part of the inaugural U12 co-ed division championship team. As one of the few girls on the team, she posed a real challenge for opposition to take down.

“This was my first time playing in a big tournament like Tropical 7s and I had no idea what to expect,” said Lalla. “Although we ended up as champions, it was a tough journey getting there. Our coach was always encouraging and our team had good structure.”

The Hawkeyes U17/19 girls will be joining with the parent club, Celtic Barbarians, in June for the first-ever girl XVs tour to Ireland. Top provincial teams Connacht and Leinster will pose a great challenge to the CB squad, which ranges from 15-18 years old. Summer 7s stops at the NAI and LA 7s will build momentum into the season finally in Dubai.

Knoxville on Nationals: If Not This Year, Then Soon