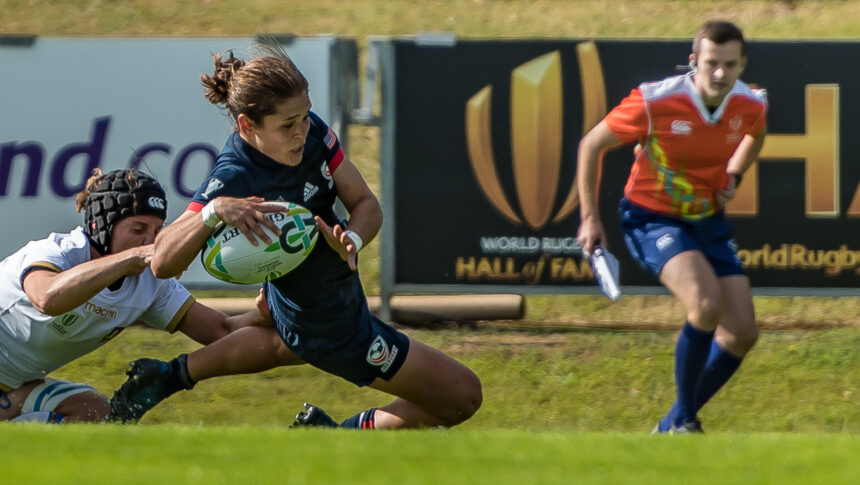 The Rugby Breakdown is very lucky to partner with Ruggette RFC, a relationship that – among many other benefits – connects TRB with Kimber Rozier. The former 7s and 15s Eagle has competed in three Rugby World Cups, and is thus familiar with the process that the current USA squad is undergoing ahead of the New Zealand tournament later this fall.

Uniquely, Rozier was playing overseas before the Prem was in the professional state it is today. When Rozier represented USA Rugby at the 2017 World Cup, the flyhalf was one of two players (Jess Wooden being the other) who was playing overseas (Harlequins). Today, the majority of the USA 15s squad, which is wrapping up its U.K. tour in England, plays in the Allianz Premier 15s. Rozier, who lives in England, regularly watches Prem game in person:

When the USA beat Scotland 21-17 last Saturday, Rozier noted the hallmarks of the American game – physicality, defense – but was impressed with the ruck speed with which the forwards played and scrumhalf Olivia Ortiz’s delivery. The flyhalf called out several Prem players in different positions – like Gabby Cantorna and Katana Howard at 10 and 12, respectively (they are the “they” that Rozier references in the following video) – and liked their impact on a fast game.

England awaits on Saturday, and Rozier will be there in the Sandy Park stands. Rozier noted that you have to go into every match believing that you can win; however, USA Women’s National Team coach Rob Cain did not verbalize the goal of beating the Red Roses in the way he did against Scotland. It’s a balance – giving respect to one’s opponent and managing expectations, and remaining confident in and committed to one’s game.

Either way, Rozier will be a vocal supporter, and the local explained that it’s actually not that difficult to be a non-England fan in England. The Red Roses are tightly surrounded by other big rugby nations, all of which enjoy an England loss when it happens.

Can’t be alongside Rozier in the Exeter stands this Saturday? The Rugby Network has the live-stream (10 a.m. ET) available for free.