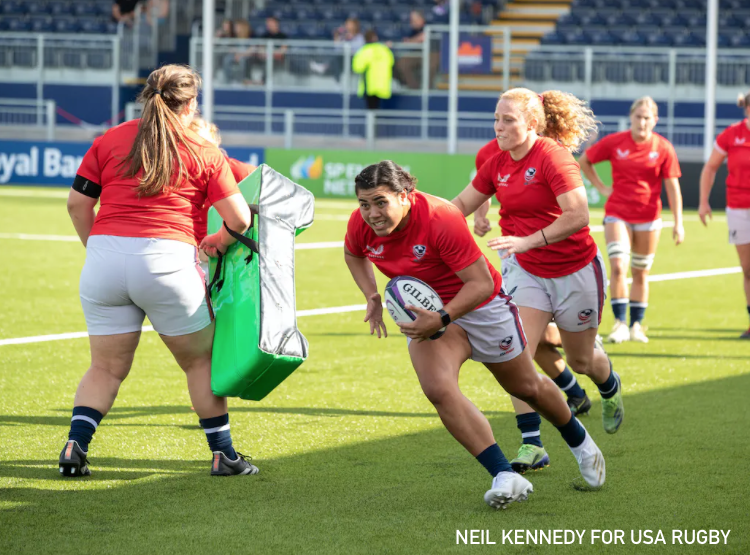 The USA Rugby Women’s National Team (WNT) has named its roster against England, a game that marks the team’s final test match prior to the Rugby World Cup in New Zealand. The game occurs in Exeter, England, and The Rugby Network’s free live-stream begins 10 a.m. ET on Saturday, Sept. 3.

The Eagles are coming off a 21-17 win against Scotland on Aug. 27 and WNT head coach hasn’t made many changes to the starting lineup that produced that victory.

“Last weekend has given us an exciting and strong platform to work from,” Cain told USA Rugby. “We showcased how we want to play, how dangerous we can be and the benefit of time as a collective unit. Edinburgh also showed our ability to tactically adapt as a team in real time and at half time.”

Starting lineup changes include Kristine Sommer, who steps into the second row for Jenny Kronish, and Georgie Perris-Redding, who replaces Jordan Matyas in the back row. The Sale flanker applies pressure from the strong side while Rachel Johnson – one of six Exeter Chiefs in the match-day 23 – slides to #6. The back line is unchanged from last Saturday. There are three swaps in the reserves, as hooker Kathryn Treder, flanker Bitsy Cairns and flyhalf Megan Foster join the finishers. [9.3 Update: Eti Haungatau sustained an injury during the captain’s run and Meya Bizer has replaced the outside center. Tess Feury has been added to the reserves.]

“This weekend gives us another opportunity to showcase this progress, cement combinations and give further opportunities to others who have been working hard but not featured yet,” Cain looked toward England. “It’s been a good week, we’re adding, refining, challenging and working together as we aspire to put on another improved performance against England.”

England beat the USA 89-0 in November 2021, but Red Roses head coach Simon Middleton isn’t relying on that result to set expectations for Saturday.

“If anybody thinks it’s going to be an easy game it is definitely not,” Middleton told EnglandRugby.com. “I know there was ten changes in that team that played Scotland against the team that played us [in 2021]. … There’s a lot more structure and shape about them, they’ve always had that physicality and they’re bouncing as a side at the moment. They’re very confident and we’re wary of them. We’ve prepared fantastically well this week and there’s a lot on this game, individually and collectively so we want to be at our very best.”