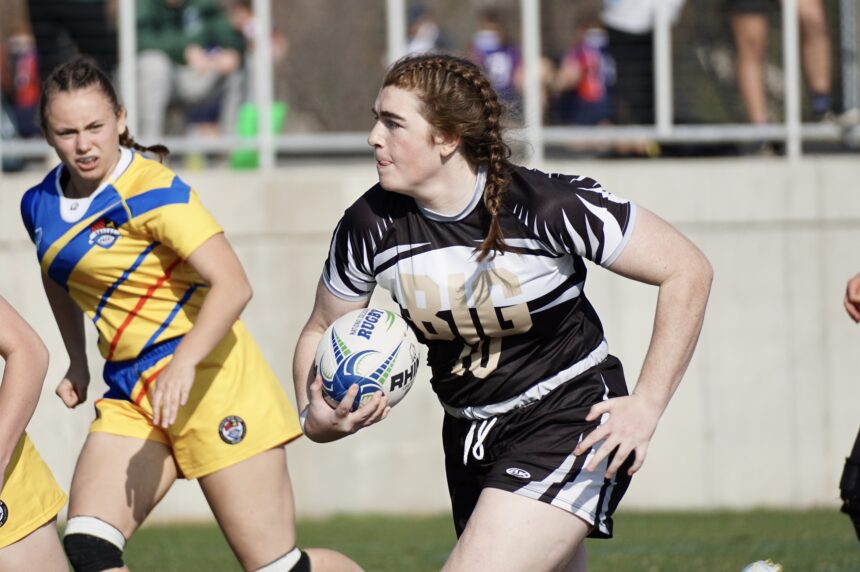 Eighteen teams reported to the National Collegiate Rugby (NCR) All-Star 7s Cup in Round Rock, Texas, and day one has produced a narrowed field heading toward two divisional titles. After Saturday’s games, the Small College Division is at the semifinal stage, while the Division I/II competition (aka, All Star Division) starts Sunday with semifinal play-ins.

The Small College Division divided its eight teams into two pools of four, so everyone played three games before moving into crossover quarterfinals. Pool D winner Eastern Pennsylvania Rugby Union (EPRU) beat Rugby Northeast 25-0 to move onto Sunday’s semifinals. The defending champion got leading performances out of players like 2022 MVP Morgan Mattia (jr.) and Marywood sophomore Rosalyn Page, who is a tackling fiend. Coach Scott Stratton indicated that this year’s squad really gets along and the chemistry is playing out on the pitch. Rugby Northeast is a first-timer to the tournament and so this trip is about laying a foundation for the future. 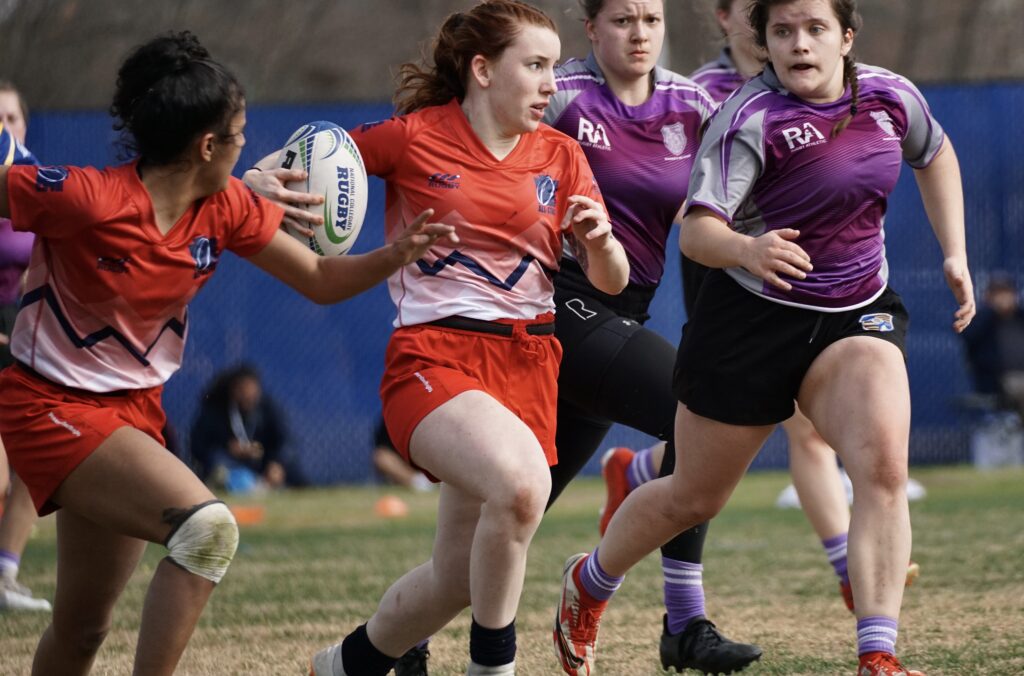 Pool C winner Great Waters also looked solid and continued its winning streak into the quarterfinals, defeating Allegheny 15-0. There were several familiar players from Northern Michigan Univ. – Savannah Struble, Virginia Harris – who also impressed at the 15s nationals, as well as Elsa Athiley and Vera Soloview, who helped Univ. Chicago to the 2022 NCR Small College 7s National Championship. Great Waters as a conference has teams in both divisions, and its DI/II counterpart is also competing in Sunday’s Cup bracket. 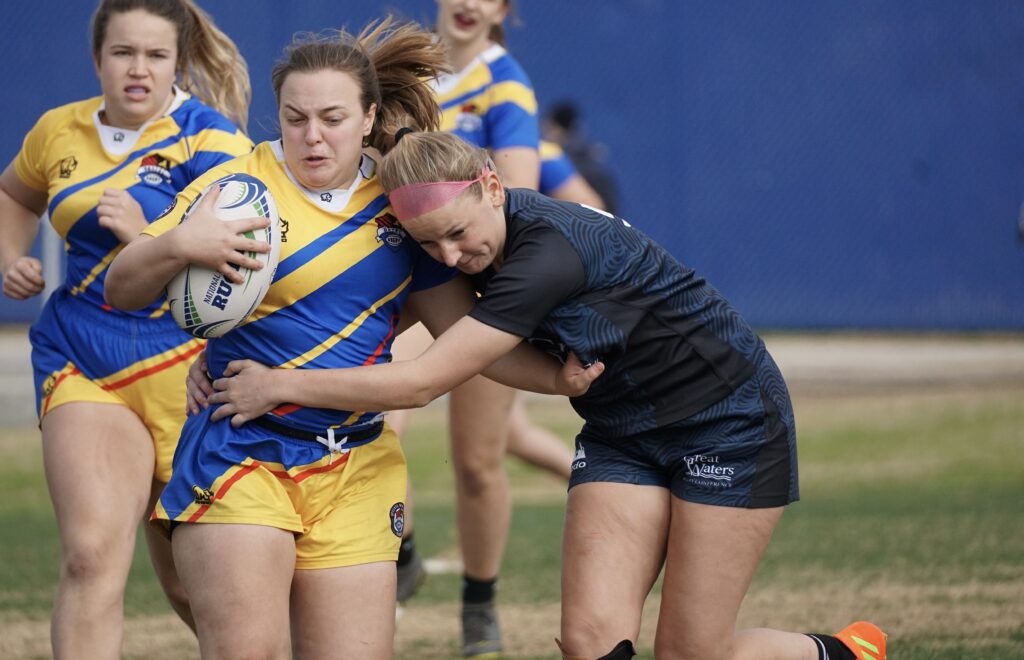 Ohio Valley and Colonial Coast both finished runner-up in their respective pools, and fittingly advance to the semifinals after winning their quarterfinals. Ohio Valley opened the day against Great Waters and only fell 15-12 before beating Rugby Northeast and Upstate New York by larger margins. In the quarterfinals, the Midwestern team beat Northern Lights 26-17. The Endicott College players were prominent for Colonial Coast, but notables like Ali Banks and Laryssa Landmesser were testaments to the quality within the conference as a whole. The Northeastern team beat Upstate New York 24-5 in the quarterfinals and will face Great Waters in Sunday’s semifinals.

Remember: In 7s, every team, regardless of whether it’s in the title hunt or not, has a Day 2. Check out NCR’s brackets to see where teams are filtering. 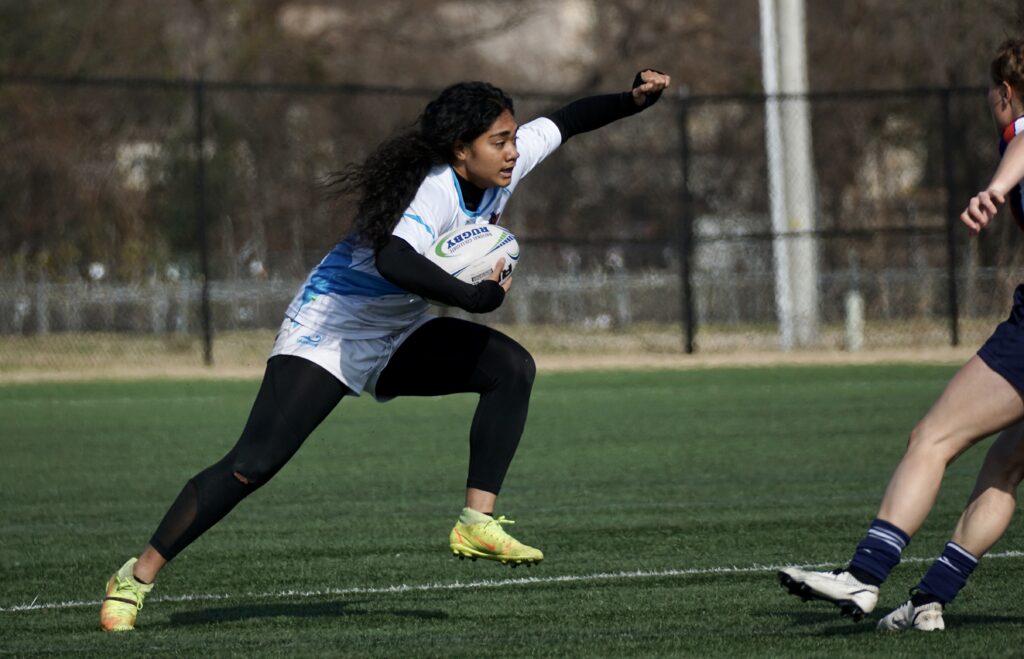 In the All-Star Division, the 10 teams were divided into two pools of five, and everyone played four games to determine Sunday’s knockouts. Day Two begins with the semifinal play-ins, which feature the second- and third-place teams from both pools. The two pool winners – Midwest and Big 10 – got a bye through this opening round and will face the winners of the play-ins. The remaining quartet is playing for 7th.

No team went undefeated on Saturday, as both of the pool victors tied one opponent. Lone Star actually tied two teams on the day – Allegheny and Big 10. The Big 10 won Pool A, beating Mid-America 36-0, Allegheny 22-5 and Upstate New York 39-7, and then tied Lone Star 17-17. The team features players from all of the Big 10 member schools, which is cool, and Iowa’s Erica Coulibaly (8) is one to watch for sure. It’ll face the winner of Great Waters vs. Lone Star in the semifinals. 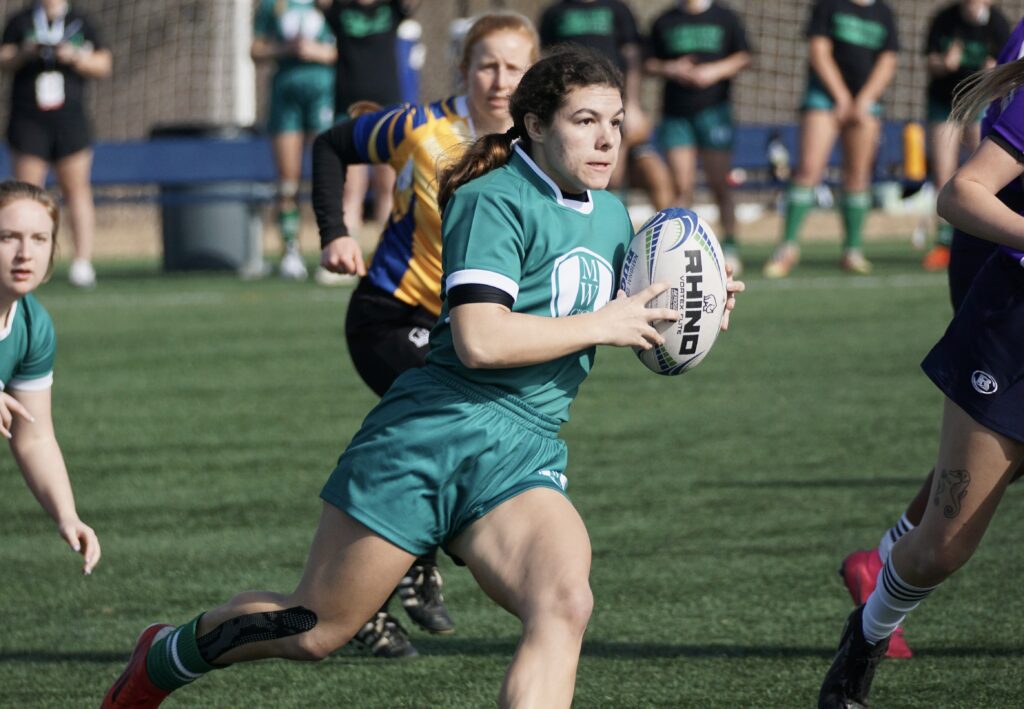 The Midwest won Pool B, beating Great Lakes 17-10, South Atlantic 36-0 and Great Waters 34-10, and tying the West 17-17. The West is a super interesting team, as it doesn’t actually represent a conference. It’s mostly MiraCosta Community College in SoCal and Univ. South Dakota, and it’s got a lot of fun players – including captain Bella Devore (interview forthcoming) and NCR Select alumna Trixie Jo Schlecter. The Midwest is led by captains Madie Dunn (Iowa State) and Aubrey Buresh (Univ. Northern Iowa), and while their two programs are familiar with each other and their coaches, they’ve enjoyed bonding with Winona State and the Wisconsin players (video interview forthcoming). The Midwest will play the winner of Upstate New York vs. West in the semifinals.

Action begins at 8 a.m. CT and all the games being played in the stadium (not Field 1) will be live-streamed on NCR’s YouTube Channel. See this schedule for details.