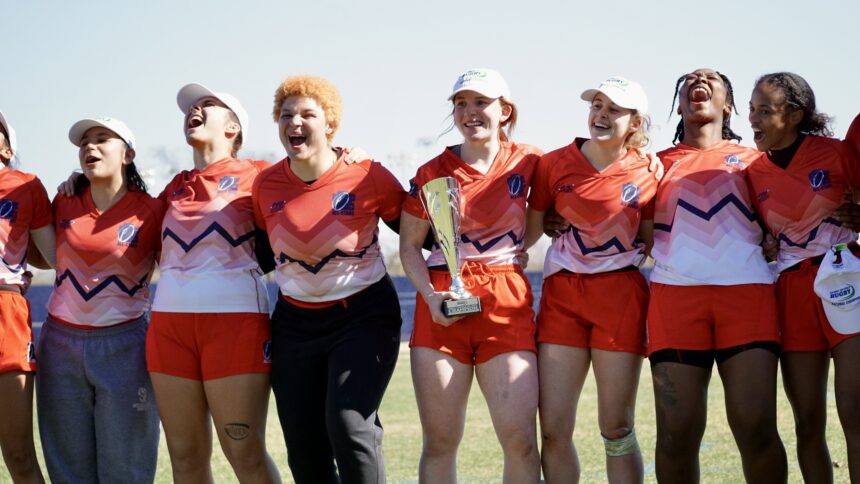 The National Collegiate Rugby (NCR) All-Star 7s Cup could not have delivered a more perfect Small College title match. There was end-to-end action, try-trading and sudden-death overtime, keeping the energy on and near the pitch at a premium. In the end, Eastern Pennsylvania Rugby Union (EPRU) prevailed against Colonial Coast for the repeat trophy.

The Small College Division was straightforward in that pool play and the quarterfinals were contested on Saturday. Sunday began with the Cup semifinals, and the first knockout of the day – Colonial Coast vs. Great Waters – set the tone for the day. The teams were well matched. Colonial Coast’s Ali Banks and Great Waters’ Ella Erickson traded breakaways. The northeast team played a really nice offloading game, and the latter played stellar defense (Hannah Timm!) and held up a sure try that kept the 0-0 deadlock in place until the final two minutes. That’s when a stolen scrum, followed by nice interplay through traffic, saw Jourdan VanAmburgh score from in close. That ended up being the only points of the game, and Colonial Coast advanced to the final with a 5-0 win. 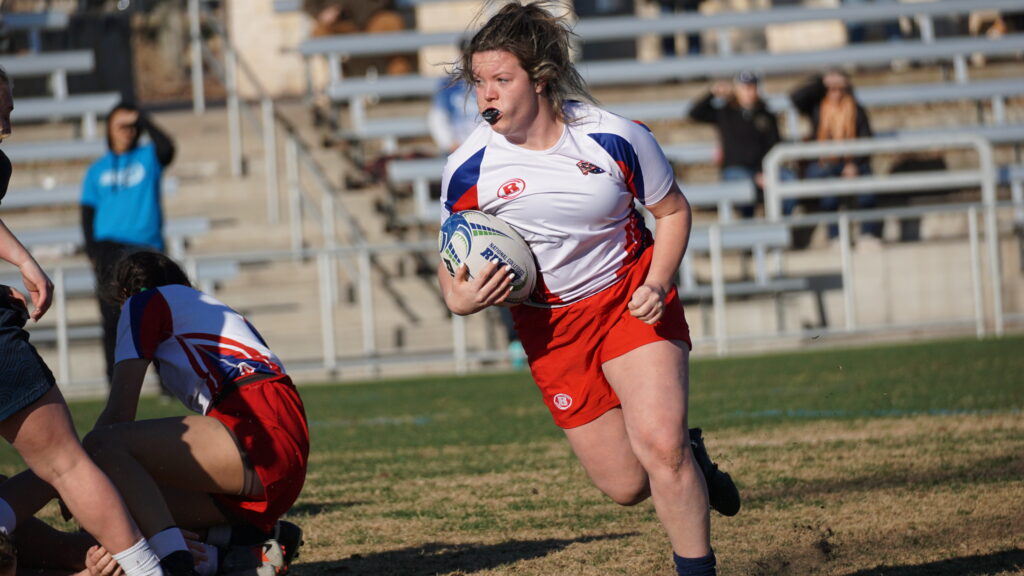 On the other side of the bracket, EPRU beat Ohio Valley 47-5, and Morgan Mattia, Saira Alexander, Hannah Plotkins and Lindsay Foster all featured on the score sheet. The defending champions looked good and continued that flow into the title match. A high tackle penalty saw EPRU scrumhalf Ciara Sharkey launch into attack mode and score, and then Gianna Calciano followed shortly afterward with a try and 10-0 lead. It looked like maybe the title match would follow the trend of the teams’ pool play match – a game that EPRU won 24-5 – but then Carolina Stubbs took the inside pass from Tess Merrill to score from five meters out. Cassidy McElhinney added the extras, 10-7. Before the break, Banks drew a not-releasing penalty in the tackle, and then the offloading game found its rhythm. Once in striking distance, the ball moved wide to Merrill for the try and lead change, 12-10. 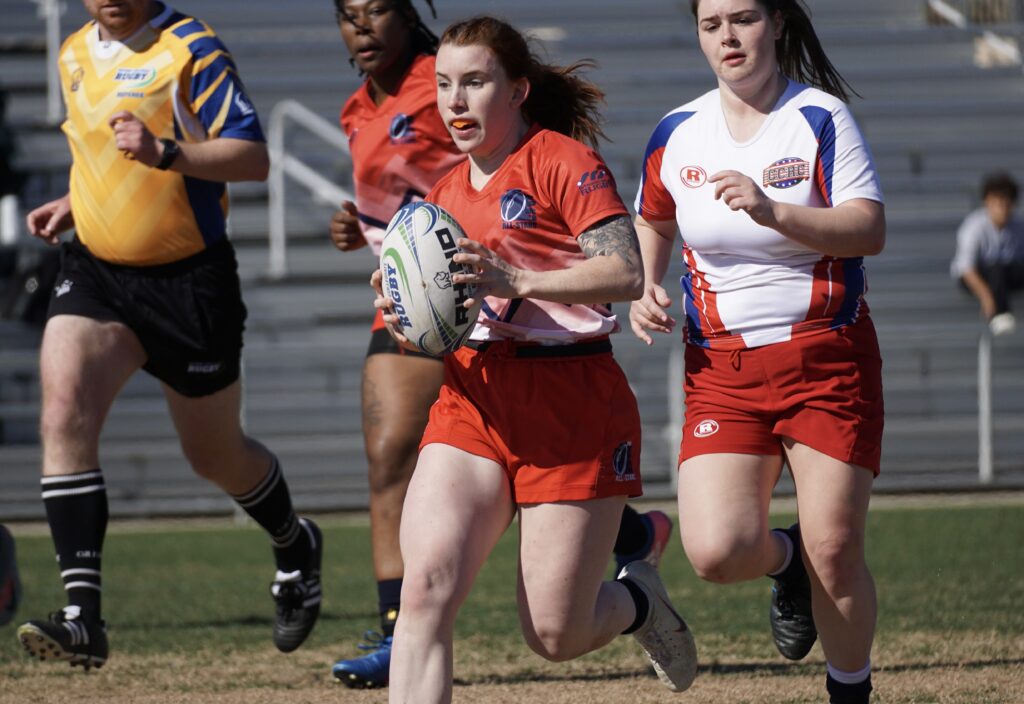 The back-and-forth continued right from the second-half kickoff. After a knock-on and scrum from mid-field, a big bumping run from Jaidyn Bowen put the team in scoring position and then Sharkey finished the rest with a second try, 17-12 to EPRU. Colonial Coast kept pushing and Eli Bischoff broke out wide but didn’t have the corner around Anderson, who was major on defense. The ball worked back toward the middle where Merrill kept her feet while exploring different options through the defense, until success, and a try. The conversion missed, and the 17-17 scoreline held through regulation. 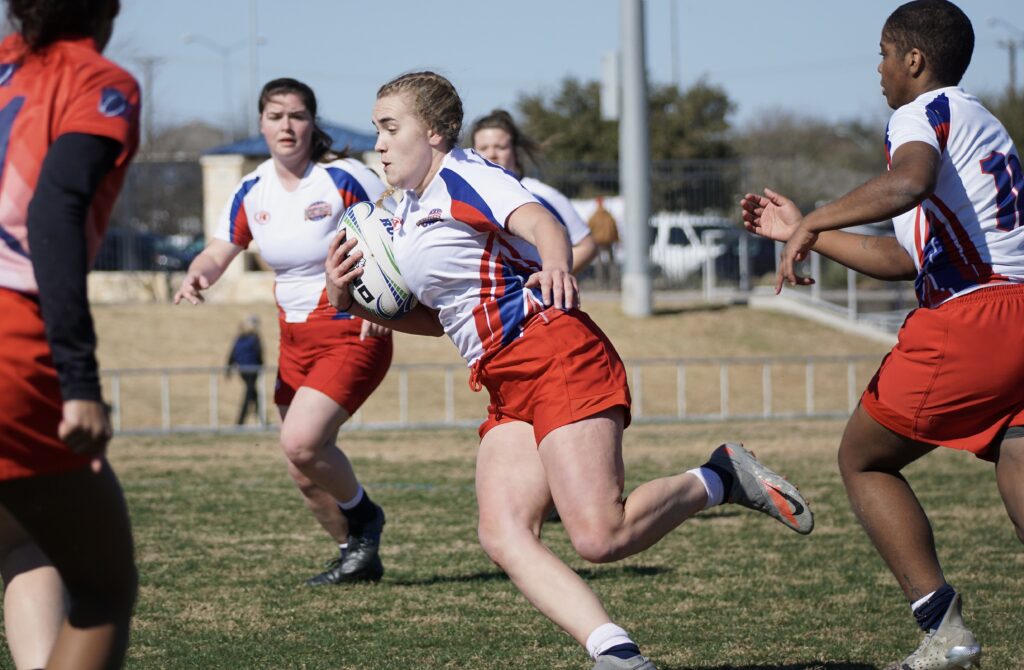 In sudden-death overtime, Colonial Coast got over the try line but wasn’t able to dot down. A five-meter scrum followed and EPRU drew a short-arm penalty, and quickly booted the ball down field. The chase was on. Merrill got to it first and had no choice but to smother the ball on the ground, as Anderson was there in pursuit. The eventual MVP got the steal, moved it to Morgan, who then stepped a final defender for the winning try, 22-17. The ending was so fast and dramatic, and all the emotions followed. 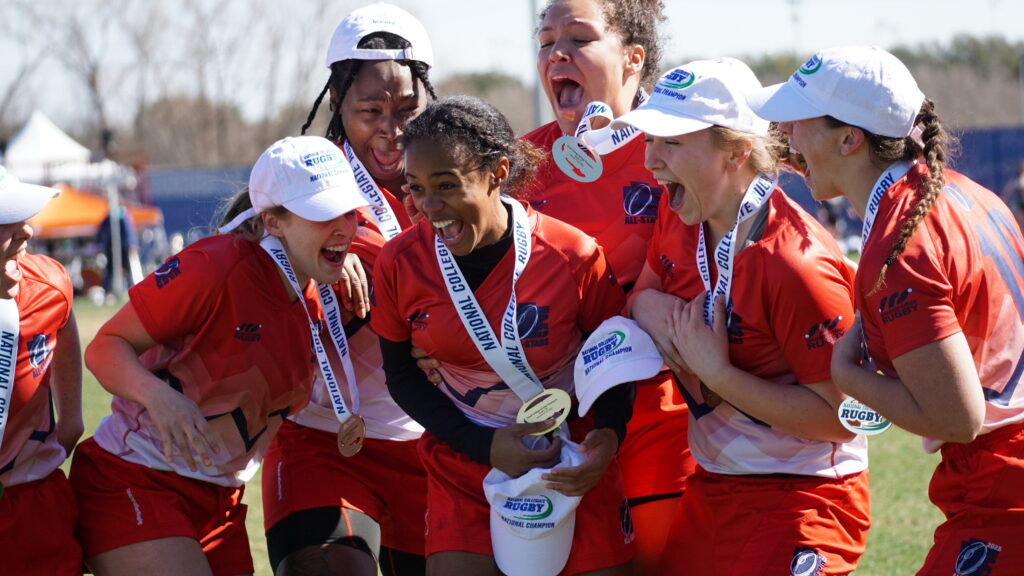 PR 7s Experts coach Ros Chou chose and presented the championship MVP award and called out Anderson’s defensive prowess as a difference-maker in the final.