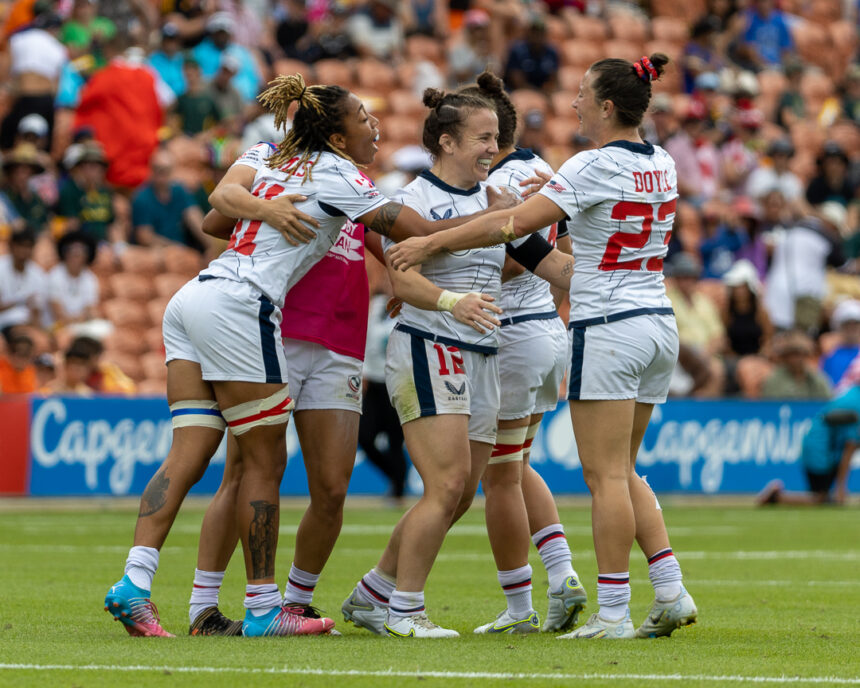 For a third-straight tournament, the USA Women’s 7s Team has exited an HSBC World Rugby Sevens Series event with hardware. After bronze medal performances in Dubai and Cape Town, the Eagles advanced to the Hamilton 7s final last weekend. The USA took silver against host New Zealand, finishing 5-1 on the weekend and banking 18 standings points. The fourth series leg occurs this weekend in Sydney, Australia. [All photos © Alex Ho, hoiho.net]

“We are really happy with the progress shown across the weekend,” USA Women’s 7s head coach Emilie Bydwell told USA Rugby. “We left the last two tournaments knowing what we needed to improve on and the fact that we were able to deliver on those areas across the weekend was positive. However, the best part is we know that there are still areas that we can be more consistent in and while we are happy to have silver – we will now be focused on the next steps in our progression.” 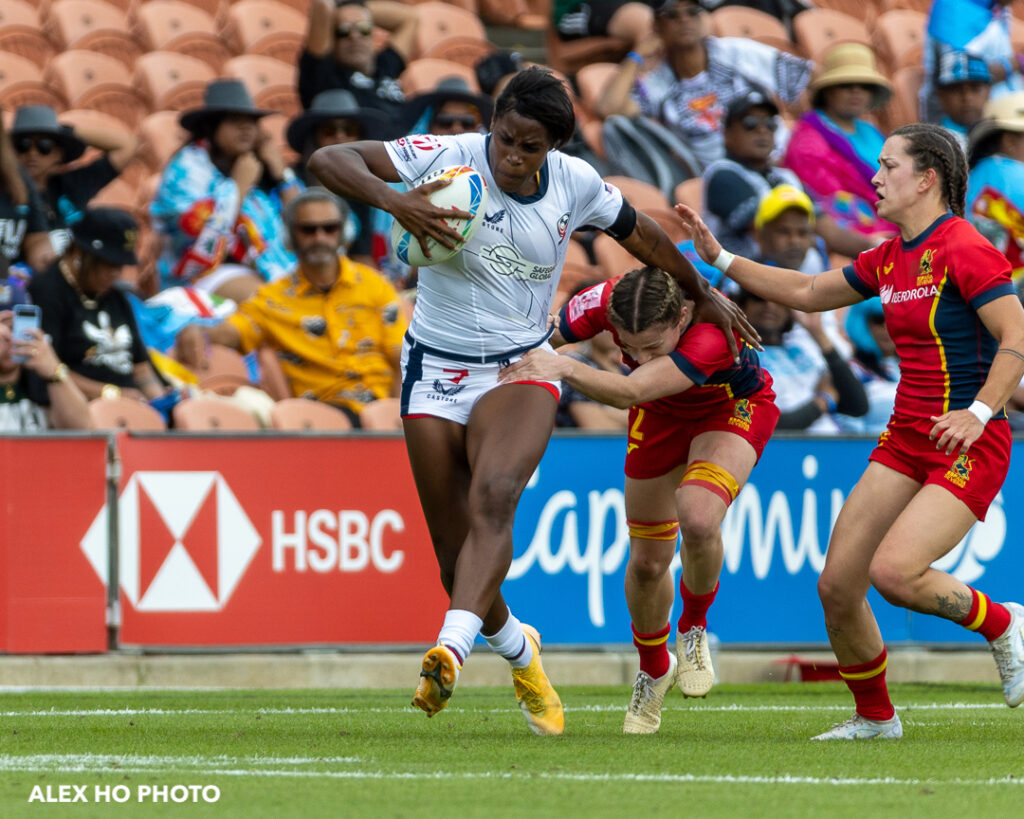 On day one, the USA won Pool C, defeating Spain 31-12, Brazil 41-0 and Ireland 15-7. Sammy Sullivan (4), Cheta Emba (3), Kris Thomas (3), Naya Tapper (2), Kristi Kirshe (2) and Ilona Maher accounted for the tries, while Alena Olsen (4) and Nicole Heavirland (2) hit the conversions. Fiji awaited in the Cup quarterfinals, and Day 2 started with a solid 27-7 win, as Maher, Kirshe, Tapper, Sullivan and Spiff Sedrick all dotted down, and Olsen added a conversion.

“We were happy with our ability to get momentum early across the first four games. That has been something we’ve focused on. We will be looking to improve on our decision making around where we play, our decisiveness and our defensive connection as that will be hugely important for our pool next weekend.” 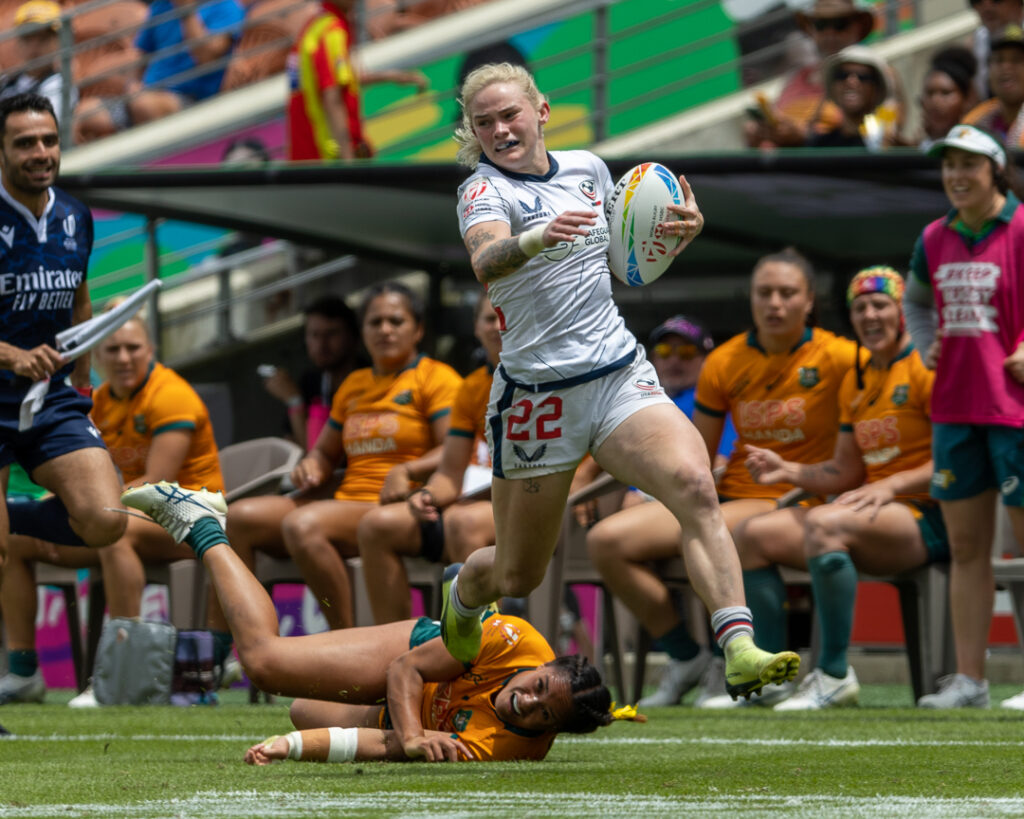 The USA lined up against Australia in the Cup semifinals. The teams had met twice during the 22-23 HSBC series, and Australia won both meetings: 29-12 in Dubai, and 33-12 in Cape Town. In Hamilton, Madison Ashby initiated the scoring and Dominique du Toit’s conversion gave Australia a 7-0 lead after five minutes. But then the USA answered back through Emba, who had a knockout tournament, to close within two. Sullivan then logged her sixth try of the tournament before the halftime buzzer, giving the Eagles a 10-7 lead at the break. The second half was a defensive battle and the USA was resolute, holding on to its three-point lead to win.

“For us, it was taking things a moment at a time. There is no way to play a team like Australia anywhere but in the present moment, so our ability to do that is what allowed us to be in a position to win. Further, the challenge we set forward was to have discipline in our penalty count AND stay committed to our plan, doing that gave us the outcome we’ve been looking for since last January,” Bydwell said. 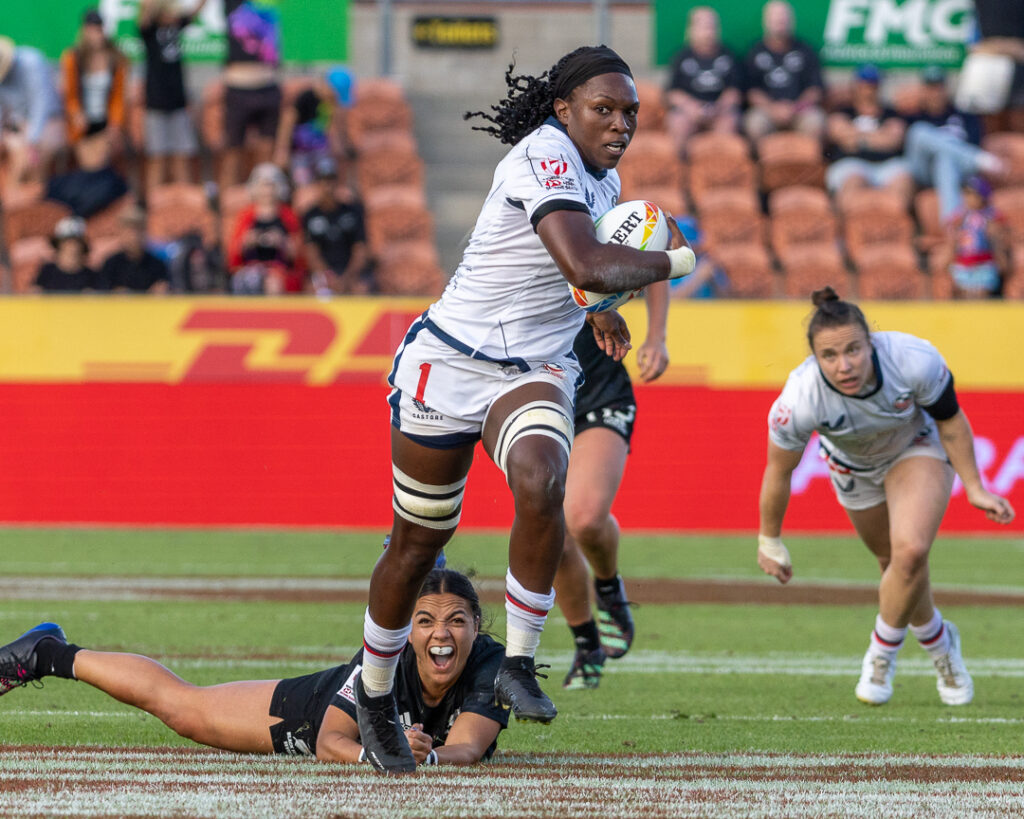 The USA advanced to its first final of the 22-23 series and took on New Zealand, which had featured in the previous two title matches and won Cape Town. The finalists had last seen each other in the Dubai semifinals, and New Zealand won that early December match 36-0. It’s tough to beat New Zealand in New Zealand, and the home side ran out to a 33-7 win. MVP Michaela Blyde scored three times to lead the team, and Emba prevented the shutout with a fifth try on the weekend. Olsen kicked the conversion.

“There is so much to take away from that game and build off of,” Bydwell closed. “We haven’t had the ability to play New Zealand as much as we have Australia and we need to understand that with that caliber of team, it’s a process. We need to remain committed to that and turn towards each other as we strive to be 5% better the next time. The main message going into next weekend is that we need to keep going moment by moment, brick by brick and take everything one game at a time.” 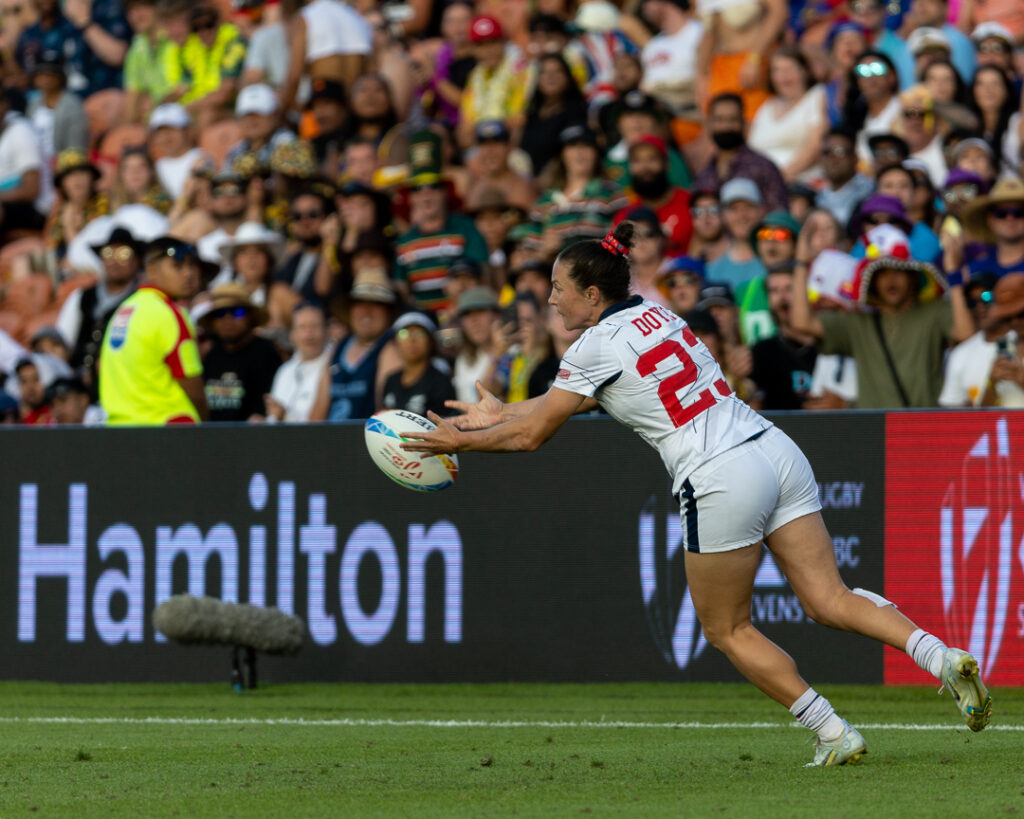 The HSBC series moves across the Tasman Sea to Sydney, Australia, and games will occur across three days, Jan. 27-29. The women’s series will break until March 3-5 in Vancouver, Canada. The men’s series is also in Vancouver, but also gets a stop in Los Angeles (Feb. 25-26) before heading to Canada.