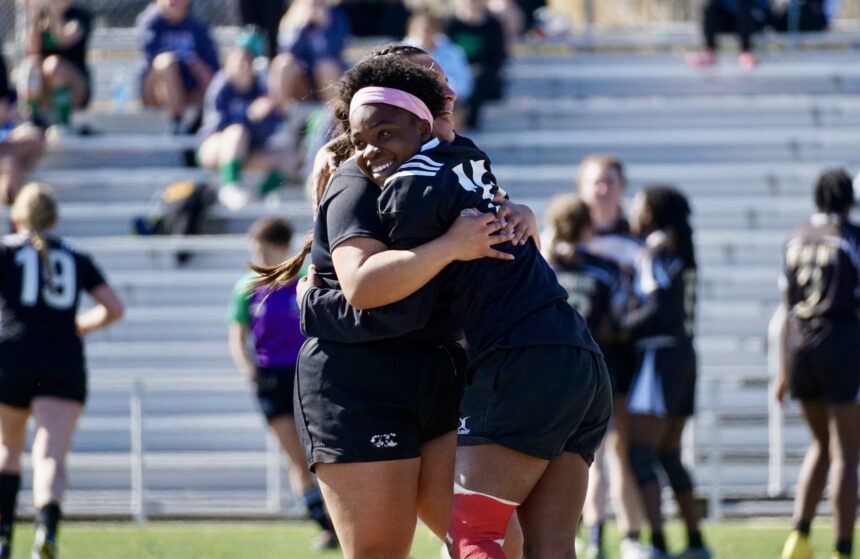 Everyone loves an underdog story, and that was the West All-Stars at last weekend’s National Collegiate Rugby (NCR) 7s Cup in Round Rock, Texas. Players and staff from San Diego and South Dakota were introduced to each other the Friday before game day, and they spent the weekend building into a championship squad.

MiraCosta College is located in San Diego, Calif., and is an independent member of NCR. (The team plays its spring 15s season in CRAA’s DII Pacific Desert conference.) Keli Ross-Ma’u is the founding coach and has brought his team to NCR 7s nationals in the past and also contributed players (like Britni Ebert) to past NCR 7s Select teams.

“I’m lucky to have some really experienced players at MiraCosta, and I wanted to give them an opportunity to play at this tournament,” Ross-Ma’u said. “But we don’t have a conference all-star team, so NCR let me know of a couple teams [in similar situations] and who to talk to. There’s where coach Eden came in.” 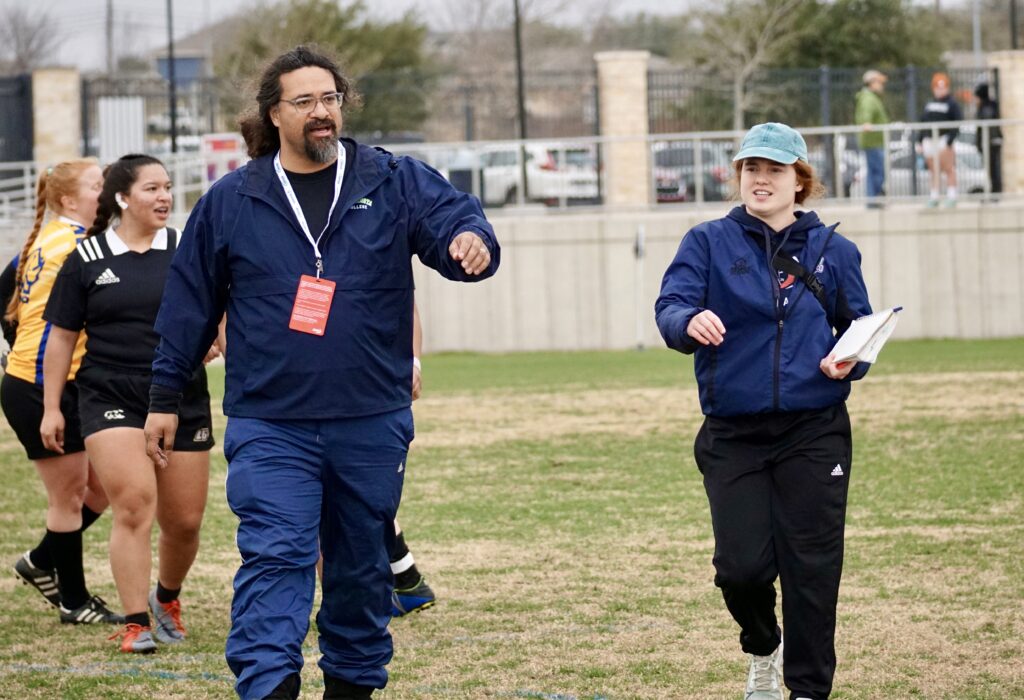 Eden Liebenthal knows about NCR 7s. The Univ. South Dakota graduate has competed at NCR 7s nationals and all-stars. She was an NCR 7s Select standout and knows some of Ross-Ma’u’s former players through that representative program.

“Prairie States is figuring some stuff out,” Liebenthal said of a conference that has won all-star 7s in the past. “We had some personnel change and we knew as a conference we didn’t have the numbers for a team this year. So this [combination team] is a great opportunity. We’re Diego Dakota.”

Ross-Ma’u and Lienbenthal signed on as West coaches, and they brought 10 players from MiraCosta College (6), Univ. South Dakota (3) and South Dakota State Univ. (1) to Texas. All-star teams are always tough, as there’s limited time for a team to gel in person, but there are some equalizers across the field. Given the timing around winter break and the geographic range of many conferences, many all-star teams struggle to train together in advance of the 7s Cup. So everyone is a work-in-progress. 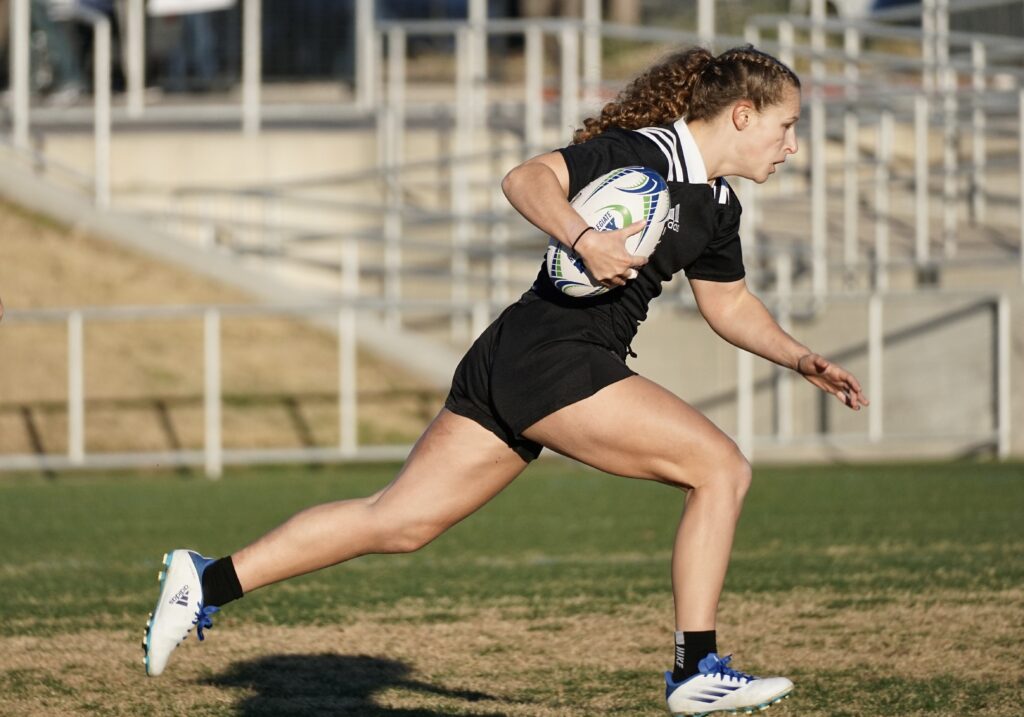 For the West, it helped to have experienced players like Bella Devore, a former USA Rugby High School All-American, who is also a girls’ high school coach and referee in SoCal, as well as a San Diego Surfer. USD’s Trixie Jo Schlechter is an annual NCR All-American and standout, and the duo bring good vision and connectivity through the middle of the pitch.

The NCR All-Star 7s Cup hosted two divisions: Small College and “All-Star,” which was for DI/DII teams. The West featured in the latter competition, along with nine other conference all-star teams. The field was divided into two pools of five, so everyone played four games on Saturday. The West started Saturday against Great Waters, and an exciting, lead-changing game evolved. It came down to the final whistle, and Great Waters got the 26-24 win.

“It’s definitely exciting to see the competitive edge that our girls bring, to be able to answer and claw back and all those things,” Liebenthal said of first impressions. “It’s a really good first game to see where we’re at, to make adjustments accordingly, and to just let the girls run together.” 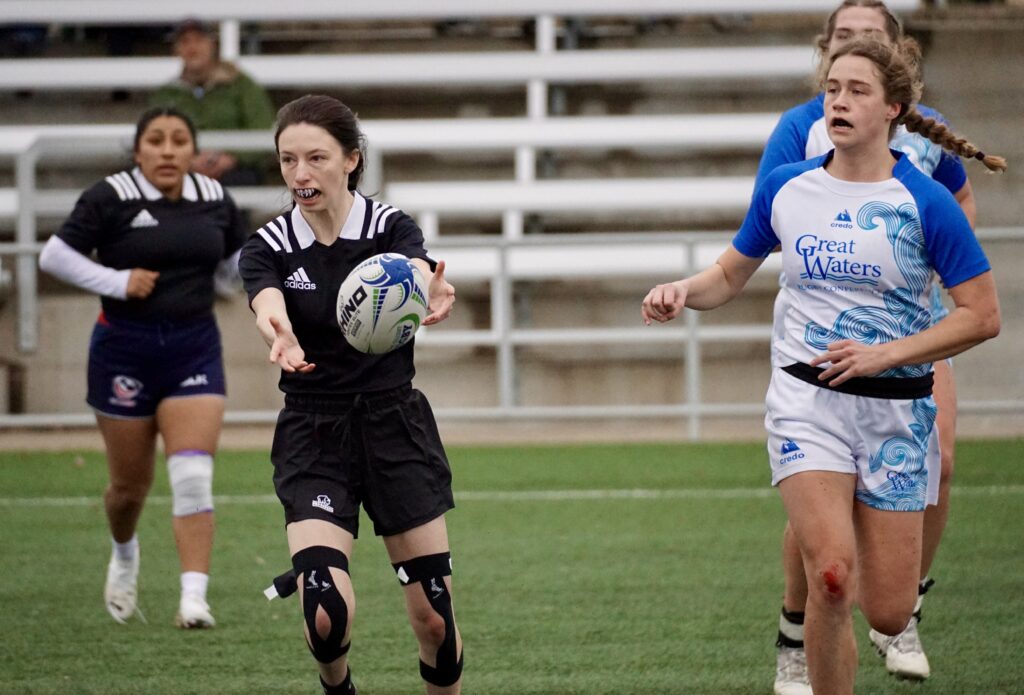 The coaches weren’t too critical after that first runout, but noted that the backs were syncing a little faster than the forwards.

“I like Trixie,” Ross-Ma’u said. “She’s a fast girl, but she seems like she can adapt to anybody. Unselfish. I love my MiraCosta girls but it’s just fun seeing the South Dakota players for the first time.

“I believe that we’re going to get better and better each game,” Ross-Ma’u continued. “We’ve really just had a little practice all together so that’s our weakness – time together. But that’s actually one of my favorite things, just seeing everyone get to know each other and watching the chemistry develop over a tournament like this.”

The pieces started coming together as the West beat South Atlantic 32-5 and Great Lakes 20-12, and then tied the Midwest 17-17. The aggression and offloading ability of Jesse James, the work rate and deceptive speed of Grace VanderZee, the flat-out pace of Makell Edwards – all of these attributes and more became apparent.

The All-Star Division was structured in a way that awarded the two pool winners – Midwest and Big 10 – a bye into the Sunday semifinals. The second- and third-place teams in each pool slotted into semifinal play-ins games, which were the first games on Sunday. That meant if the West wanted to make the final, it was going to have to play seven games total with 10 players.

The West got it done. The team beat Upstate New York 15-7 in the semifinal play-ins and then readied for a fresh Midwest side in the semifinals. The Big Green got up first, when a well timed, flat pass opened up a gap for a pull-away try. Two yellow cards, however, worked in the West’s favor, and Devore used both opportunities to put tries on the board. The scrumhalf has great vision and defense-stalling ability with ball in hand, and most importantly, works incredibly hard to be in support all over the pitch. 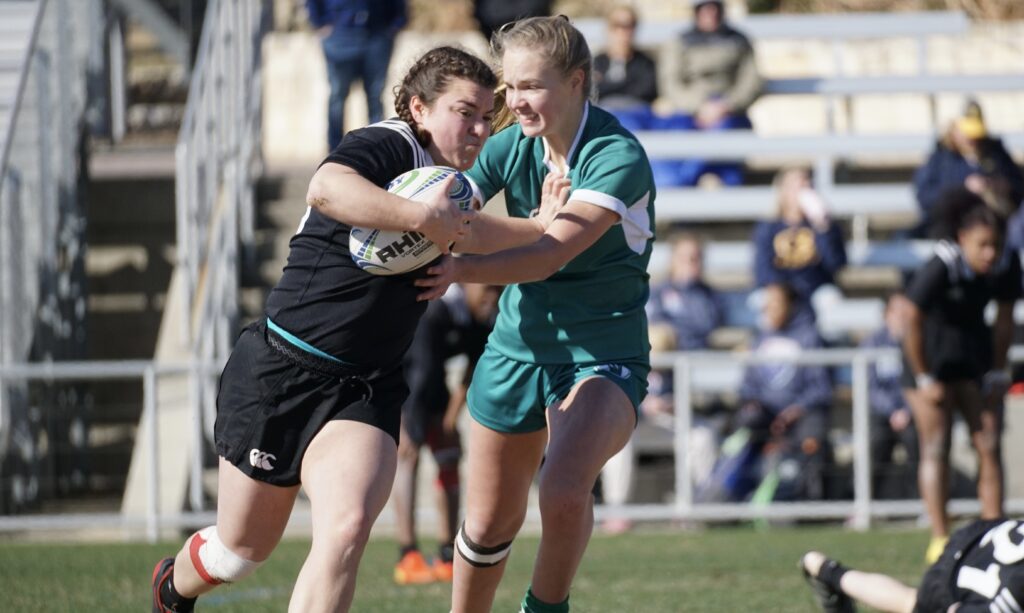 The game broke up a bit as both teams fought for every possession and fatigue started to show itself. VanderZee had a final go, running laterally to try and take the corner and then using three-straight fends to dot down a well earned, individual try, 17-5 the final.

Meanwhile, the Big 10 booked its spot in the final. Ricardo Ramirez (Notre Dame) and Jamie Frech (Michigan) pulled the conference’s first-ever all-star team together, and had representatives from all seven member teams. The Big 10 is geographically large, so there were no team trainings before the all-star event. To boot, only 2-3 of the home clubs had returned to school and resumed training after winter break, so a good amount of players hadn’t touched a rugby ball in two-plus months. 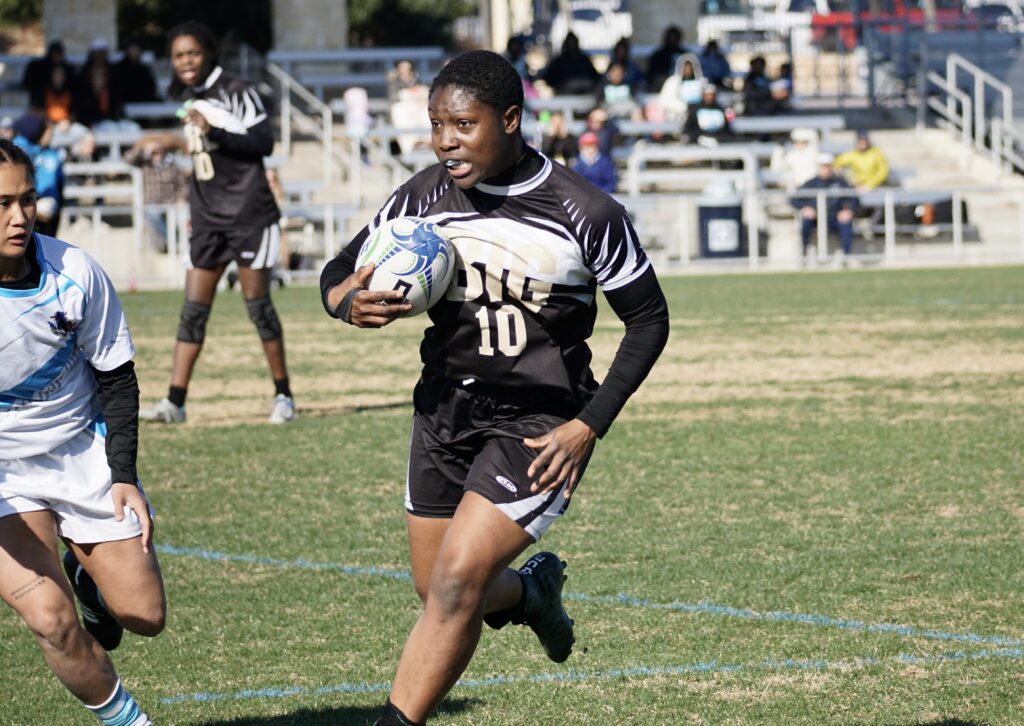 But the Big 10 looked good, especially Erica Coulibaly, but the work load was well distributed. Strong defense held pool play opponents Mid-America (36-0), Allegheny (22-5) and Upstate New York (39-7) to a try or fewer, and then the day ended with a 17-17 tie against Lone Star. The Big 10 got the bye into the semifinals, where it faced the Texan all-star team again, this time winning 29-0. Coulibaly scored four tries in that game, but again, the pressure defense and strong scrum were very impressive.

When it comes to a 7s tournament, the final is often not the best game of the weekend. Players are tapping the last of the energy reserves, rosters have dwindled due to injuries, and it’s a battle to be in the best mindset after two grueling days. That said, the West and Big 10 delivered. [Related: Small College Final Goes to Overtime] 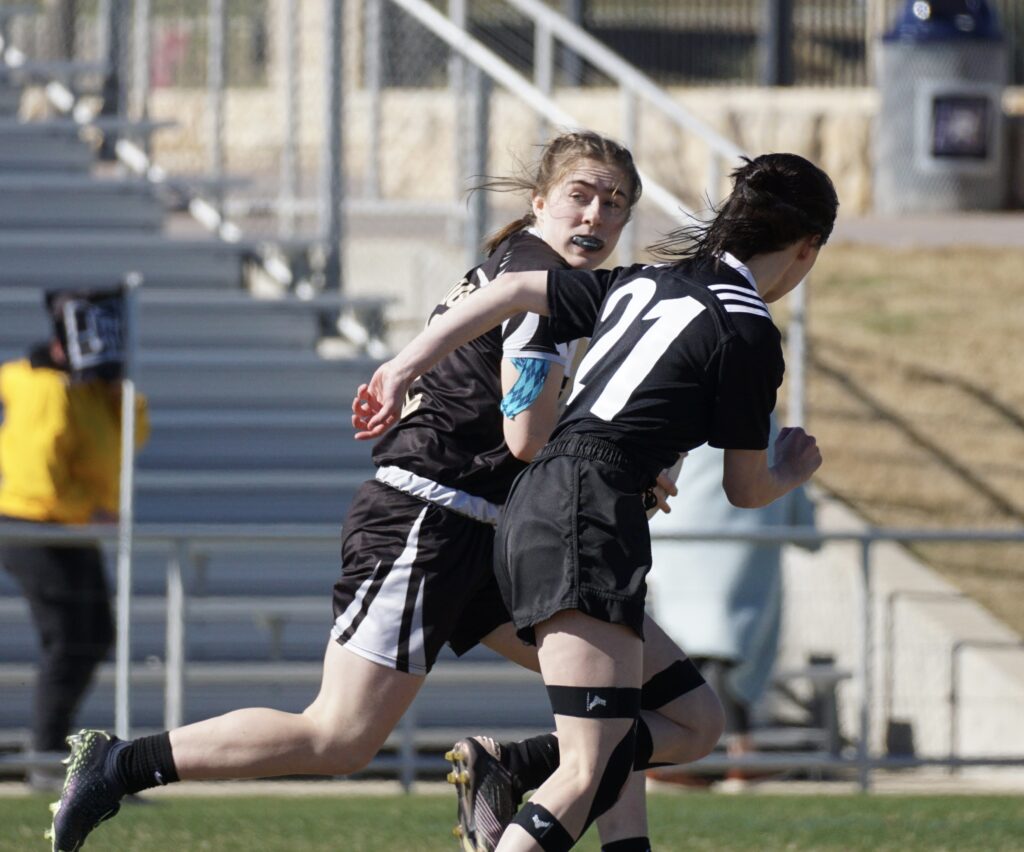 The Big 10 controlled territory in the early minutes, getting two chances to score. The first was nullified by a penalty and the second saw the defense get under Lauren Kuffel’s attempted dot-down. But the subsequent scrum afforded a penalty in the Big 10’s favor, and Coulibaly went quickly from the mark for dive-over try. Devore and Taylor Hodearly minutes and had two scoring attempts – the second of which was a Lauren Duffel attempted dot-down. Freshman Lauren Reddington, who was arguably the best conversion kicker in the tournament, slotted the extras for the 7-0 lead.

The West responded immediately. The restart hit the ground but Devore recovered nicely, angling toward the sideline. The halfback offloaded to VanderZee, who broke through several tackles in tight for a break-away try out wide. Stacia Sherman kicked the conversion for the 7-7 tie into halftime. 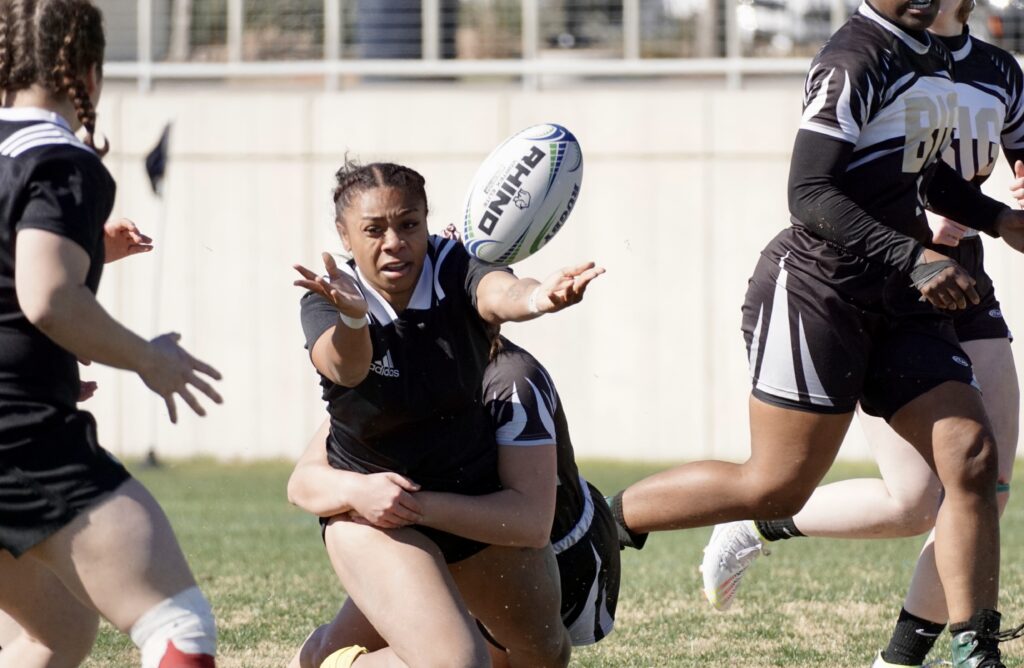 Big 10 was back on attack and Sophia Frisbie did well to work the 2-on-1 and put Reddington onto a straight-away to the try zone. Edwards, who was that final defender, closed the gap so quickly and planted Reddington, no doubt by surprise, right on the try line. A penalty did follow and so Coulibaly grabbed the ball for another close-range dive-over. Reddington made it 14-7, a scoreline that held until the final two minutes of the match.

Schlechter went on a big run to inside the opposition 22 before being pushed into touch. Big 10 took the lineout, but there was some indecision as jumper Shaianne McGruder looked for a receiver. So the West’s Breanna Nelson just ripped the ball out of McGruder’s hands and moved the ball down the line. McGruder circled around on defense and nearly picked off a finishing pass out wide, but it was deemed an intentional knock and yellow card.

James, who is so good at connecting through contact, found VanderZee with the offload, and the USD player fended and weaved through traffic for the try, which Sherman converted: 14-all. 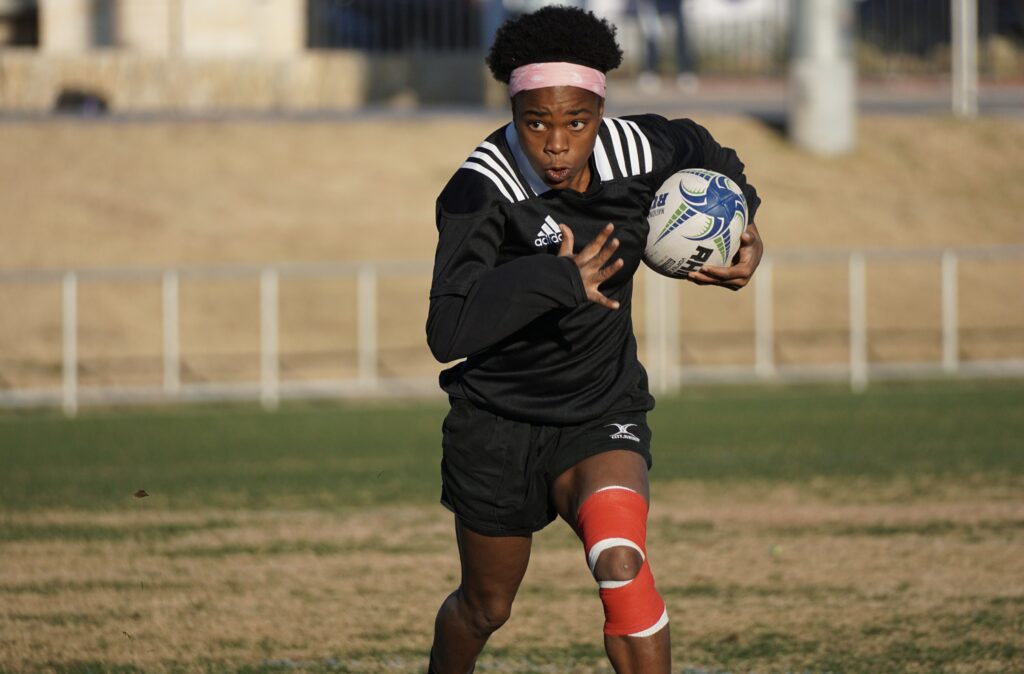 If the teams were tired, they didn’t show it. The Big 10 unloaded on defense, driving the West backward and forcing dropped balls and scrambling offense. But the West didn’t panic and eventually moved the ball to Edwards, who kicked that finishing speed into gear and took the corner for the go-ahead try, 19-14.

There was still a minute to play, but the West held on for a pretty incredible trophy run. PR 7s Experts coach Ros Chou – who along with fellow Experts coach Irene Gardner hosted coaching clinics for attendees and was busy scouting all weekend – selected Devore as championship MVP.