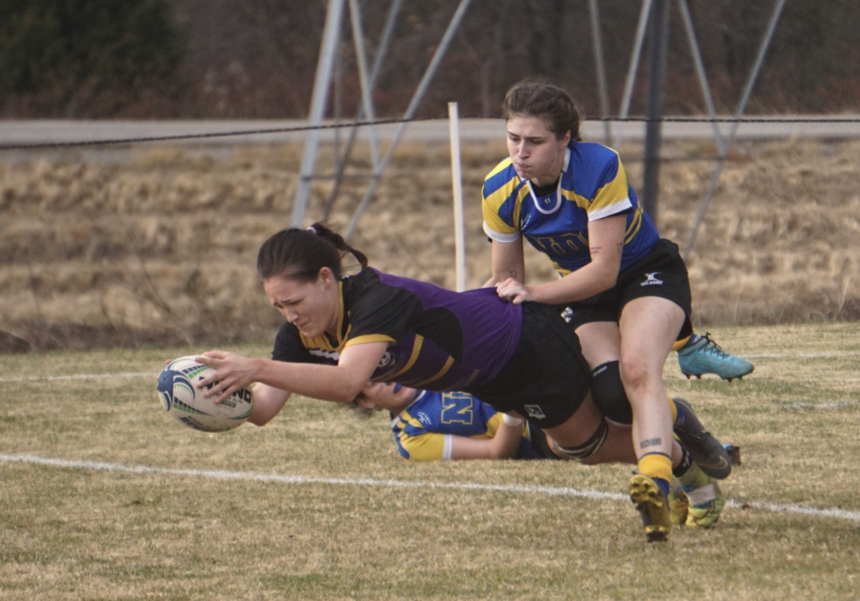 The championship weekend began with the small college semifinals, and SUNY Cortland took on hometown Lee University at 9 a.m. ET. The Flames spent the first eight minutes attacking in the Peacefrogs’ end, but the New Yorkers were ready for the defensive stand.

“It definitely fueled us,” Cortland prop and forwards captain Kailey Gleeson said. “We were working hard. Every time we went into a scrum, we were encouraging each other. We were talking to the backs, picking each other up. That’s what helps us through those times – we really know how to pick each other up and get through those tough times together, and that’s what makes us a really great team.” 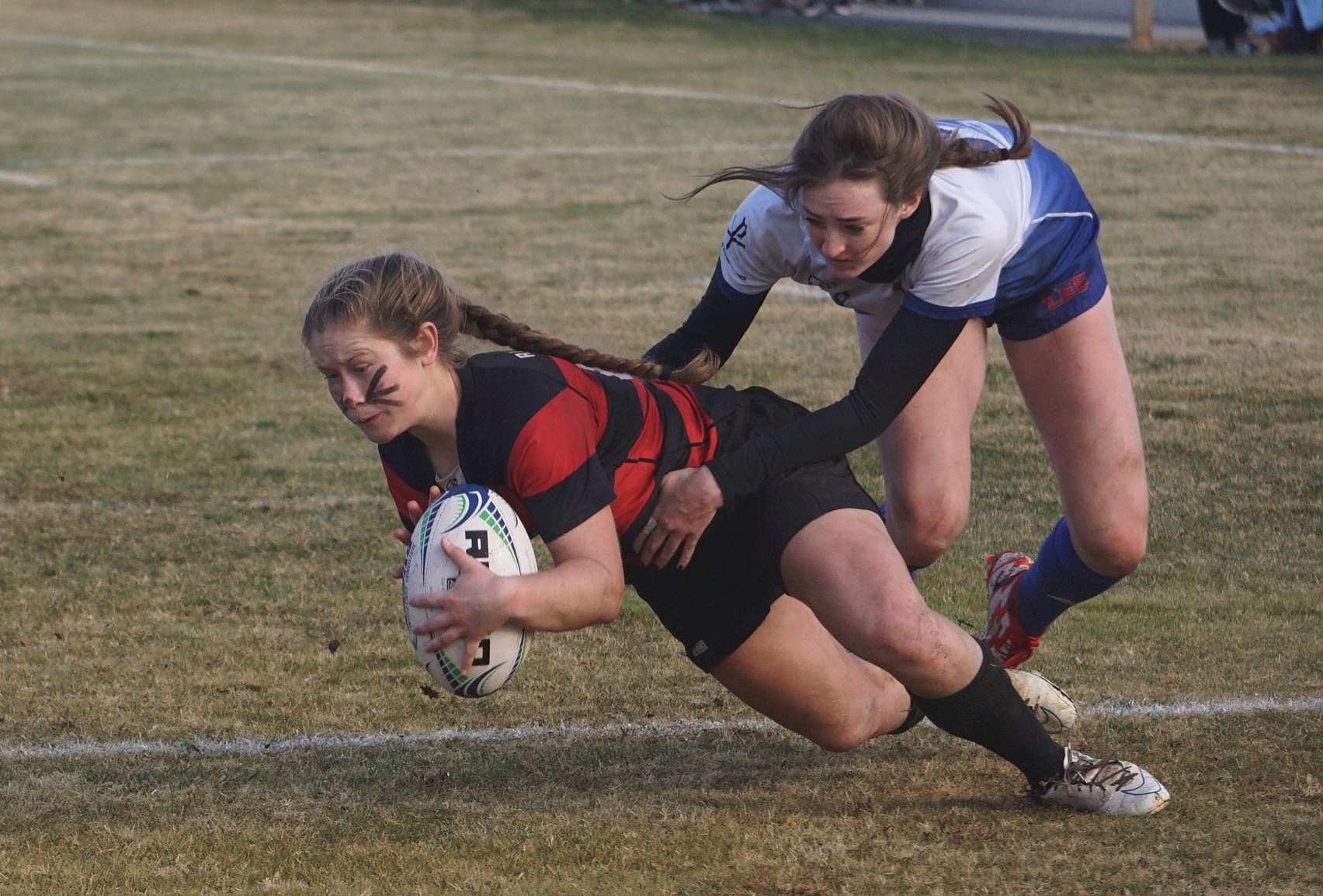 On defense, Lee struggled with some tunnel vision and Cortland began to realize overloads out wide. Centers Claire Brandon and Miya Tyler scored for a 10-0 lead after 20 minutes. Just before halftime, Lee flyhalf Siena Macy powered into the corner for the Flames’ first points, 10-5, but then Cortland scored a very important try – through Brandon – to regain momentum into the break: 15-5 to Cortland.

In the second half, a penalty at the scrum put Cortland in good attacking territory, and Gleeson added another five.

“All I knew was: I had to get in there for my teammates,” Gleeson remembered the dive-over. 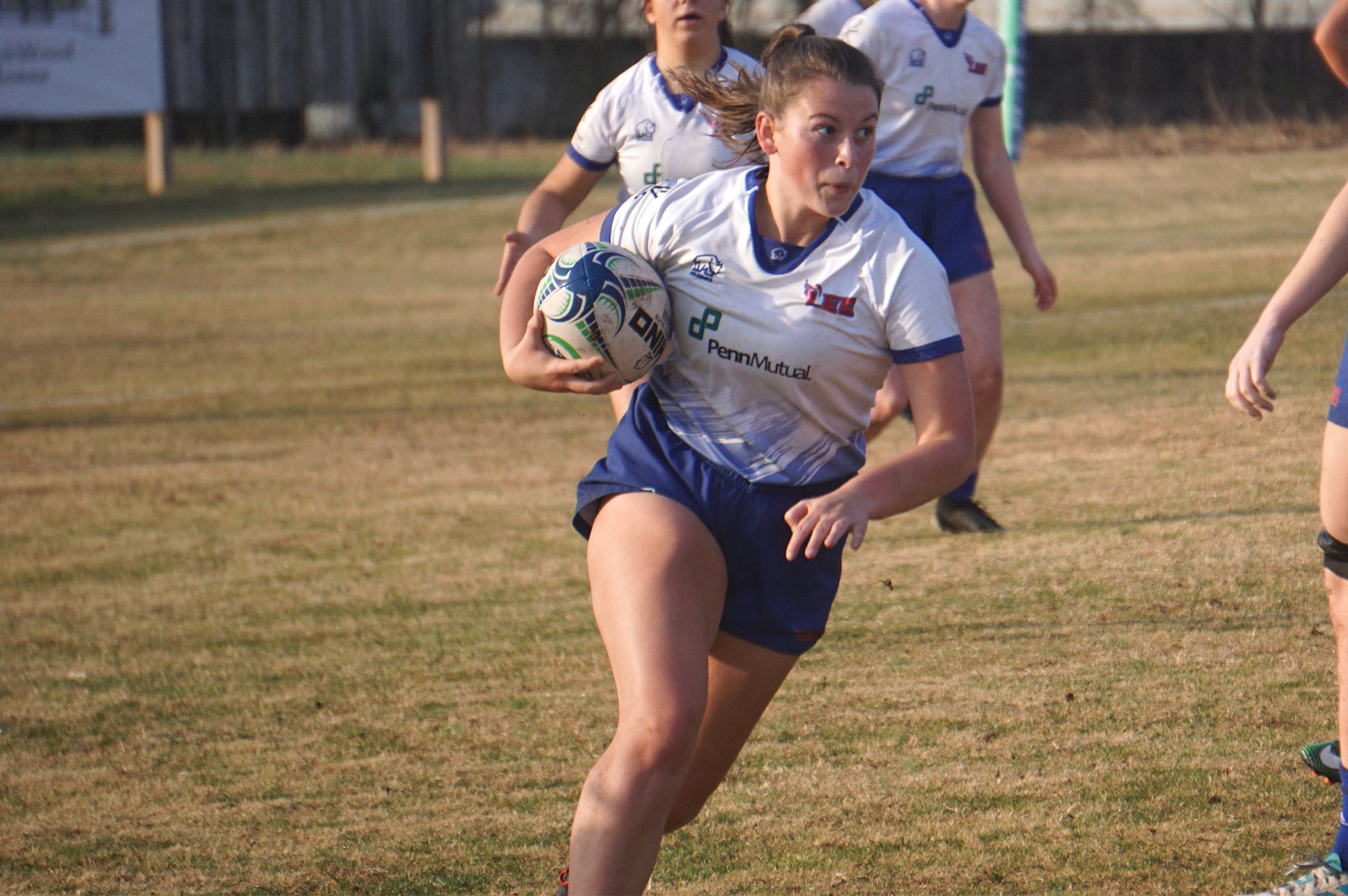 The conversions had been unsuccessful until that point, so when Lee wing Holland Vaughn went on one of several damaging breakaways, and hooker Alyssa Woody followed with a try, Macy’s conversion made it 20-12 to Cortland. But the Peacefrogs had the gas to finish out the match, dotting down three more tries and two Brandon conversions for the 39-12 win.

“The competition was the best we’ve seen all season,” Gleeson said. “It was a great game. Shout out to Lee; they were amazing. I know there are teams that get down and can get nasty. They had good sportsmanship, and that’s how we play, so it was good to see that back.”

“We watched film and we had a few girls who we knew, it’s not a one-man tackle, you’ve got double up,” Wayne State College forwards captain Izzy Robinson said of preparation. “So we had that game strategy of knowing people’s roles, and what had to be done when, and I think we did it pretty well.”

But Northern Michigan didn’t lie down. The first 15 minutes were ferocious. Wildcats flanker Ashton Hurley scored the opener, and leading points-scorer and scrumhalf Selma Taylor added the extras, but then Northern Michigan returned with a power drive down the field. A penalty at the five meter saw outside center Savannah Struble dive over for the 7-5 score line. 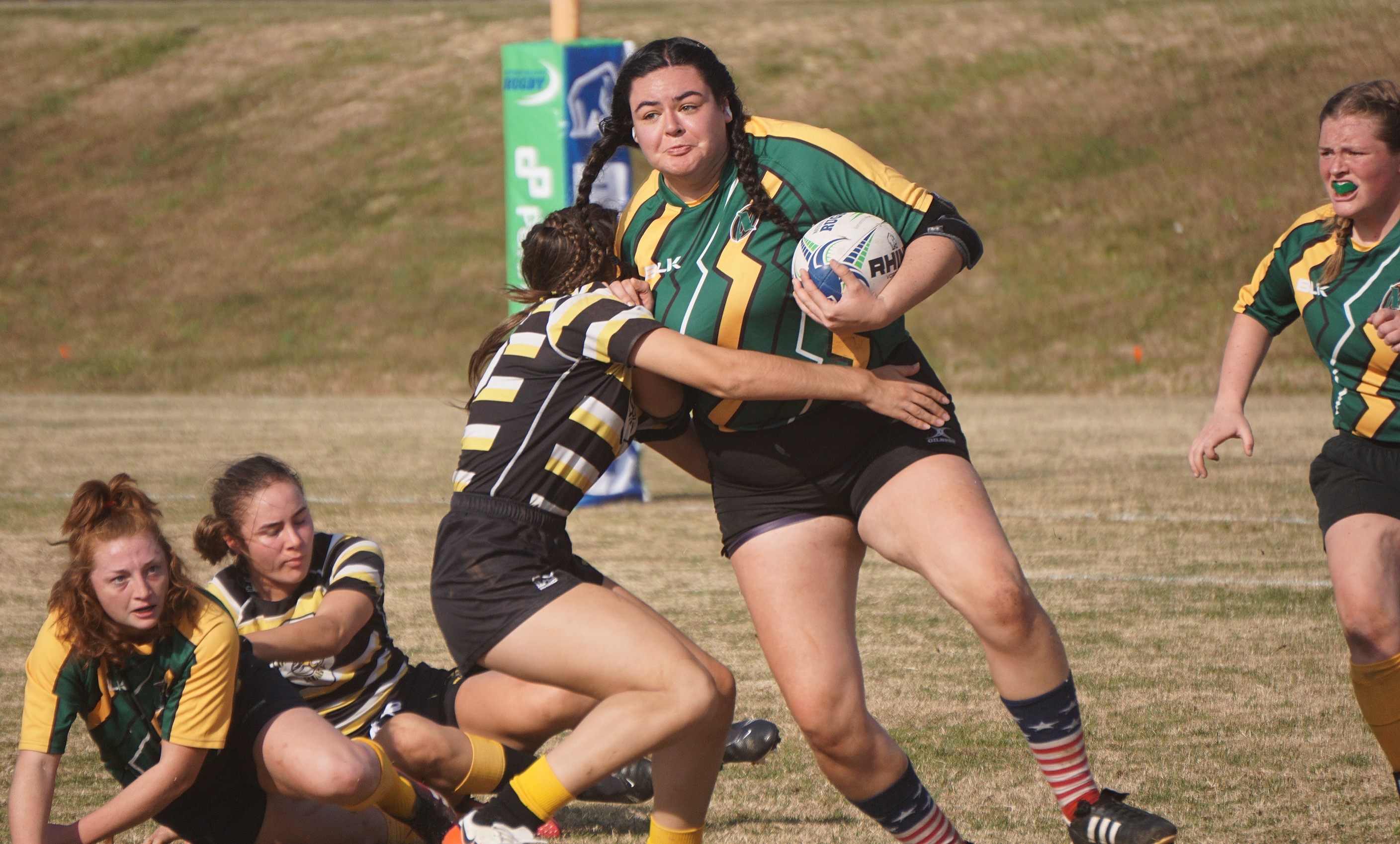 “I was telling the girls to stop being frazzled, calm down,” Robinson reflected on the first quarter. “We have a lot of youth on this team and nerves are very high with them … but we’ve just got to talk it out and then it’s perfectly fine.”

“We like to keep a shutout and they put points on the board,” Robinson said. “So we came together and told them, ‘We want a shutout but it’s not happening now, so you’ve got to put everything in now because they’re not getting more points than they already have.” 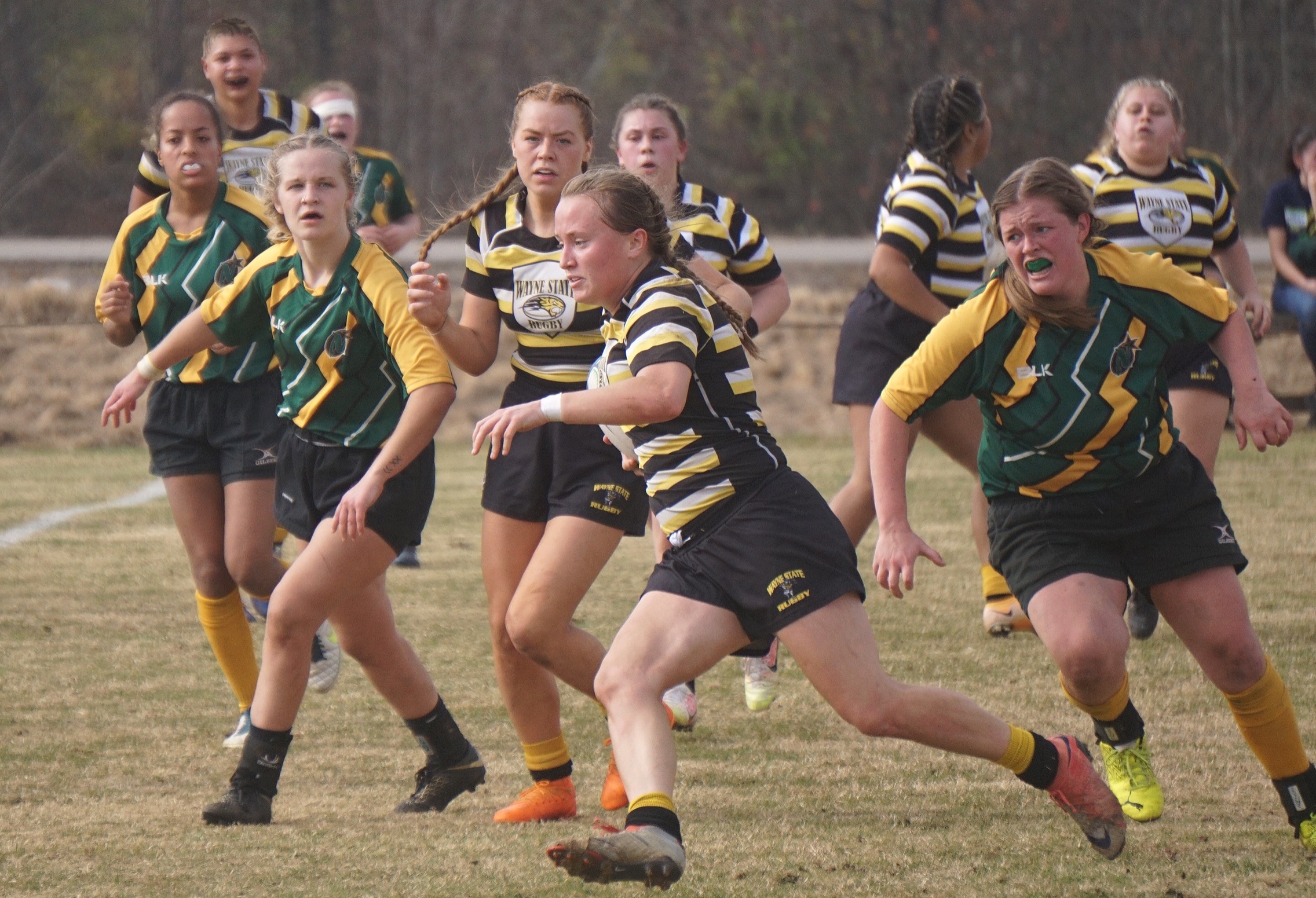 The team responded with 89 unanswered points. Robinson frequented the try zone times and also nailed penalties from 30+ meters out. Lauren Nelson was fabulous on attack and got the whole back line moving at pace.

“I haven’t thought about it; we had to win this game first,” Robinson considered the final. “But I think if we just play the way we did today – play as a team – then hopefully we can raise that trophy and it’ll all be worth it.”

The Division I semifinal between Univ. Northern Iowa and Notre Dame College was the most thrilling match of the day. The first half ended 20-10 in the Panthers’ favor, but the score didn’t necessarily reflect the amount of possession and territory that UNI controlled.

UNI inside center and captain Maggie Burns – who was perpetually over the ball stealing breakdowns – went on a mini-break and connected with fellow center Peyton Larason for the opening score two minutes in. Notre Dame College flanker Raina Perciak, a beast on both sides of the ball, tore into open field, and then two penalties followed for an even better attacking opportunity. Scrumhalf Aubrey Boing capitalized with a dive-over try, 5-5 after six minutes.

The Panthers went up 20-5 as hard-cutting fullback Ciara Stanerson-Edwards took a lovely angle to the try line; an Isabelle Thomasee line-break led to an Aubrey Buresh try; and a Burns turnover on the try line saw the captain reap the rewards with a tackle-evading try minutes later. 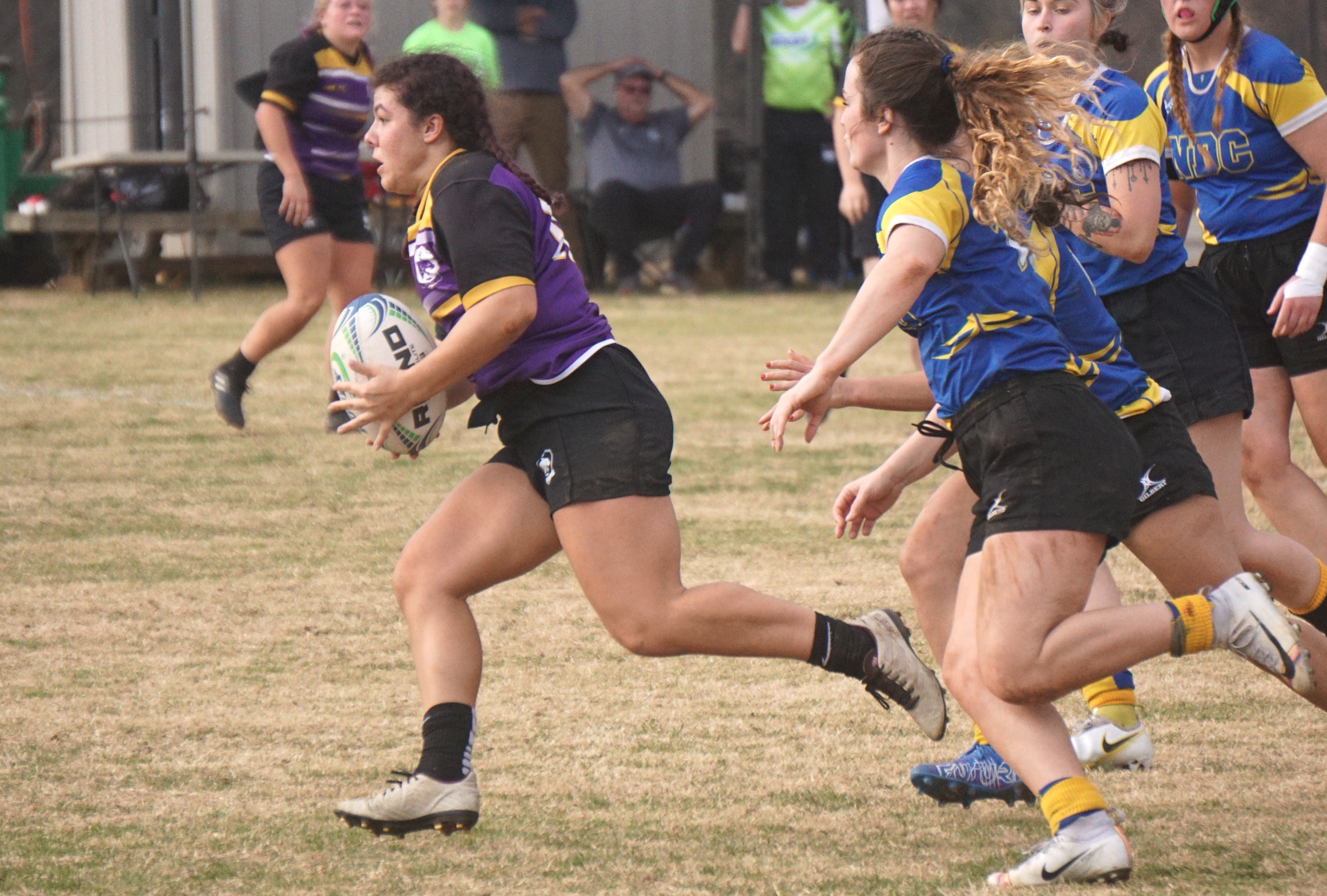 The Falcons made their own luck near the 33rd minute, as UNI attempted to clear the ball from behind its try line. Flanker Abigail Rose charged down the kick and touched it down for the score: 20-10 into the break.

Notre Dame College head coach Jack Nece indicated that the halftime talk was positive, and that the team just needed to take care of the ball a bit better. He was worried that the team’s spirit dipped after UNI scored a quick try in the second half through Buresh, 25-10, but a fantastic rally followed. Nece accredited the surge to belief. Each try brought more confidence, until the Falcons eventually overturned the lead.

No. 8 Alivia Leatherman scored two of the three tries and kicked two conversions, putting the Falcons up 29-25 with 15 minutes to play. 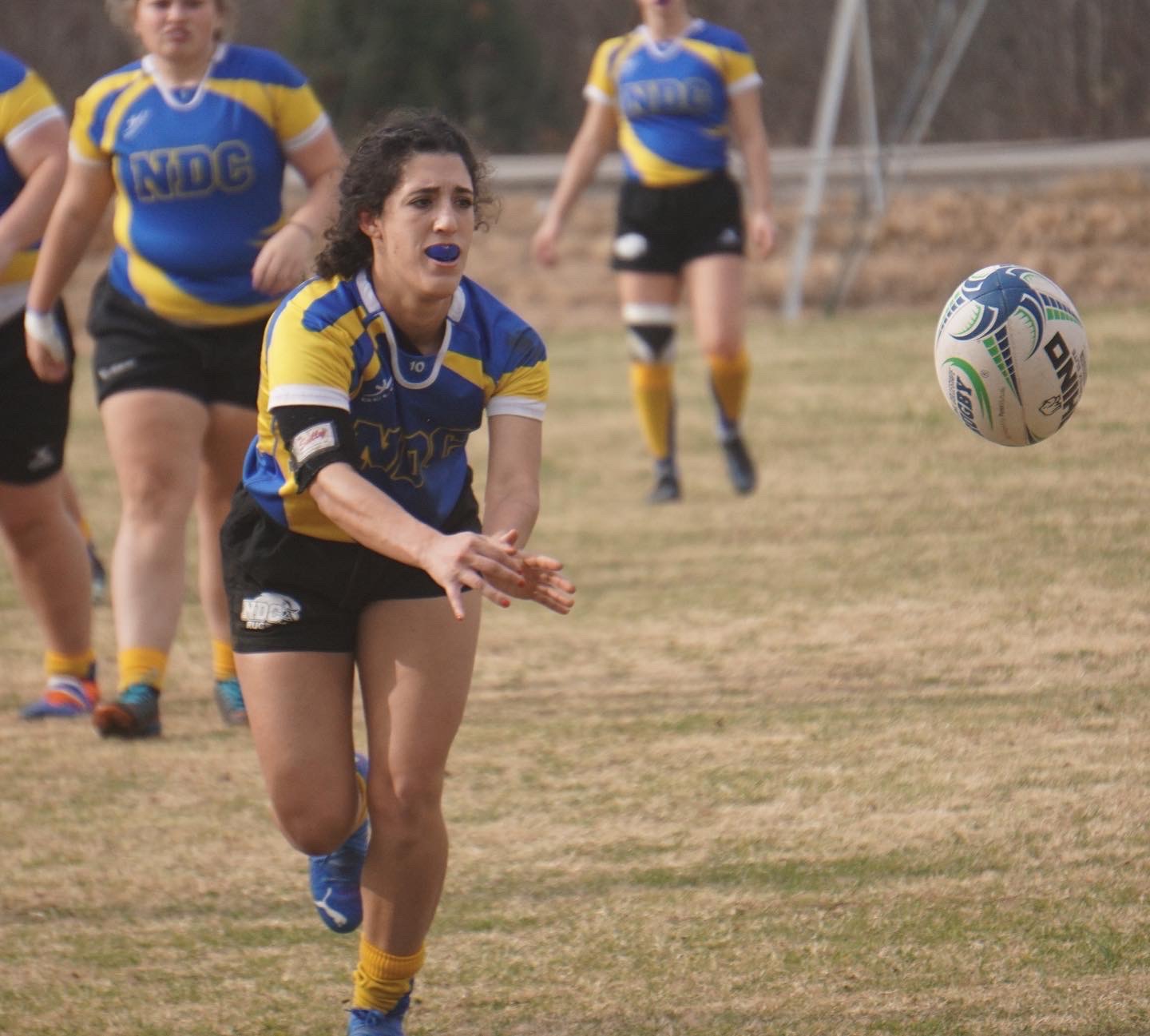 “Honestly, we just focused on one thing and it was losing possession,” Burns said when Notre Dame College mounted its comeback. “It was really just the rucks that we struggled with. The rest of the game was going well in terms of what we wanted. So we’d meet in the try zone and say, ‘O.K., we just have to clear the rucks. We’ve just got to keep possession. Everything else will be fine,’ and we trusted that. We didn’t focus on negativity. We love kickoffs, we love setting pace right off the bat – so we focused on that. We knew if we ran up hard, we’d get that momentum back.”

With approximately five minutes remaining, a couple of penalties kept UNI in good attacking territory and wing Payton Schutte capitalized on a good hands-out series for the corner score. The Falcons fought to turnover rucks – and had some success – but that hope for a final try was snuffed out by Stanerson-Edwards, who scored on a breakaway to end the game: 35-29 to Northern Iowa.

“With that game, it gave us a lot of confidence,” Burns said of the outcome. “And no matter what the score is [Sunday] throughout the game, we’ll keep that positivity knowing that if we can pull out two tries in five minutes, we can do anything.”

UNI faces Life University J.V. in Sunday’s 1:30 p.m. ET championship. The Running Eagles bested Marquette University 103-0. It was a tough outing for the Milwaukee, Wisc., team, but even as the score ran away, Marquette kept a positive attitude and focused on making small improvements to its game.

“Our main focus was: Defense wins championships,” Life co-captain and scrumhalf Emma Fredlund-Adams said. “We watched some film and noticed there was some bunching, so we really wanted to make sure that we spread them wide, use our hands and use our width.”

“As for the forwards,” Life hooker and pack captain Hannah Boekelman added, “we really wanted to do a certain lineout play. We almost had it but you’ll definitely see it in the final – so be excited.”

Life put in a complete performance, but arguably its most striking asset was the defense’s commitment to driving the attack backward. When Marquette had possession, the team went after it. Players like lock Ryley Rand and flyhalf Angela Andrews were the marks of aggressive carries, but the phases didn’t produce gaps in the defense or meters gained. 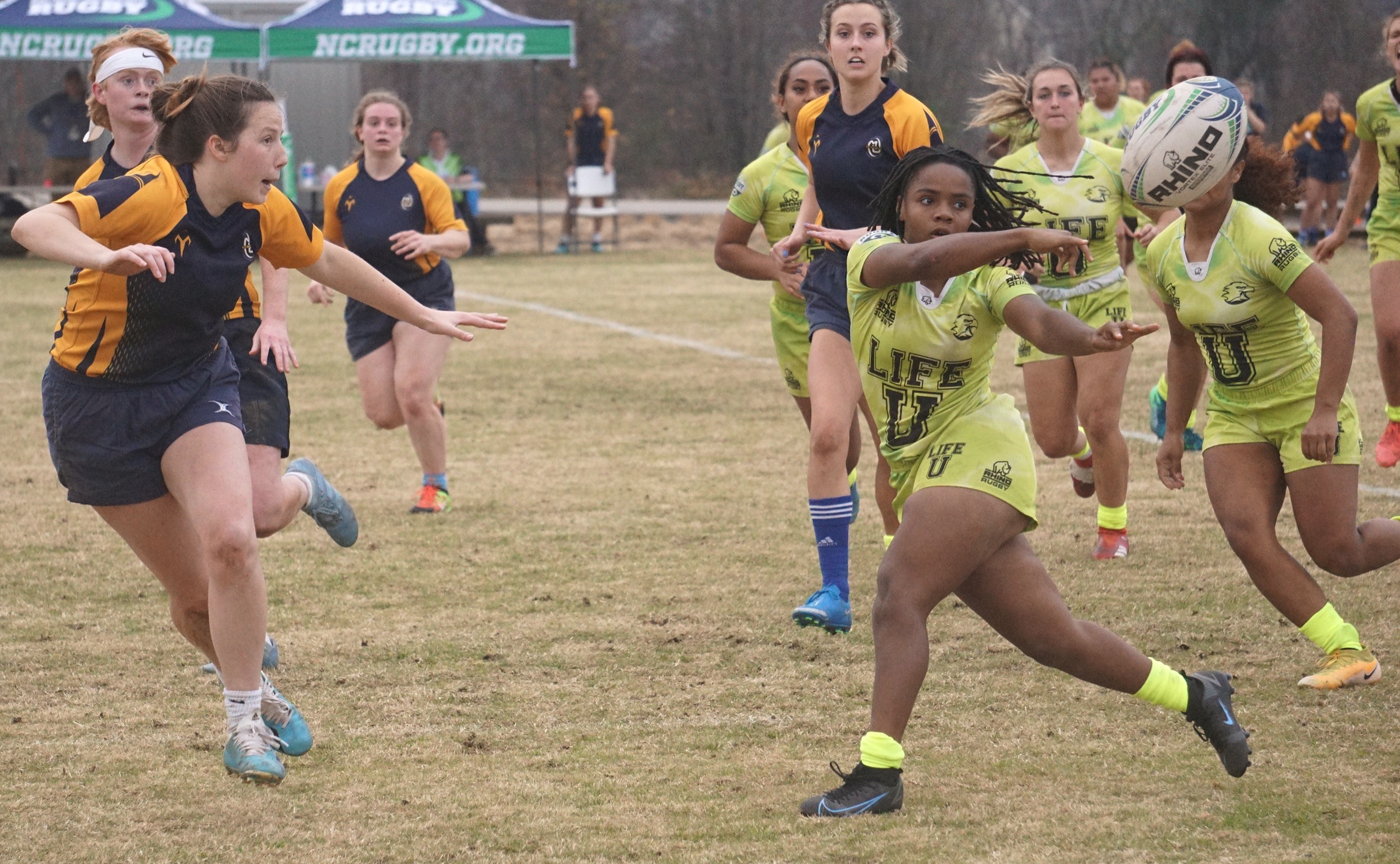 “They have great physicality and I’m excited for that,” Boekelman looked toward the final against UNI. “We like to get hyped up. We have a hard team that is great into contact.”

Life University traveled with its own cheer squad, which was important to keeping energy high throughout the match.

“That’s very standard. We love to have hype on the bench because it hypes us up on the field,” Fredlund-Adams closed. “We actually had quite a few players from the varsity squad who came to Knoxville and supported us this weekend, so we’re so lucky to have them. They brought signs and have been making up cheers as we go.”