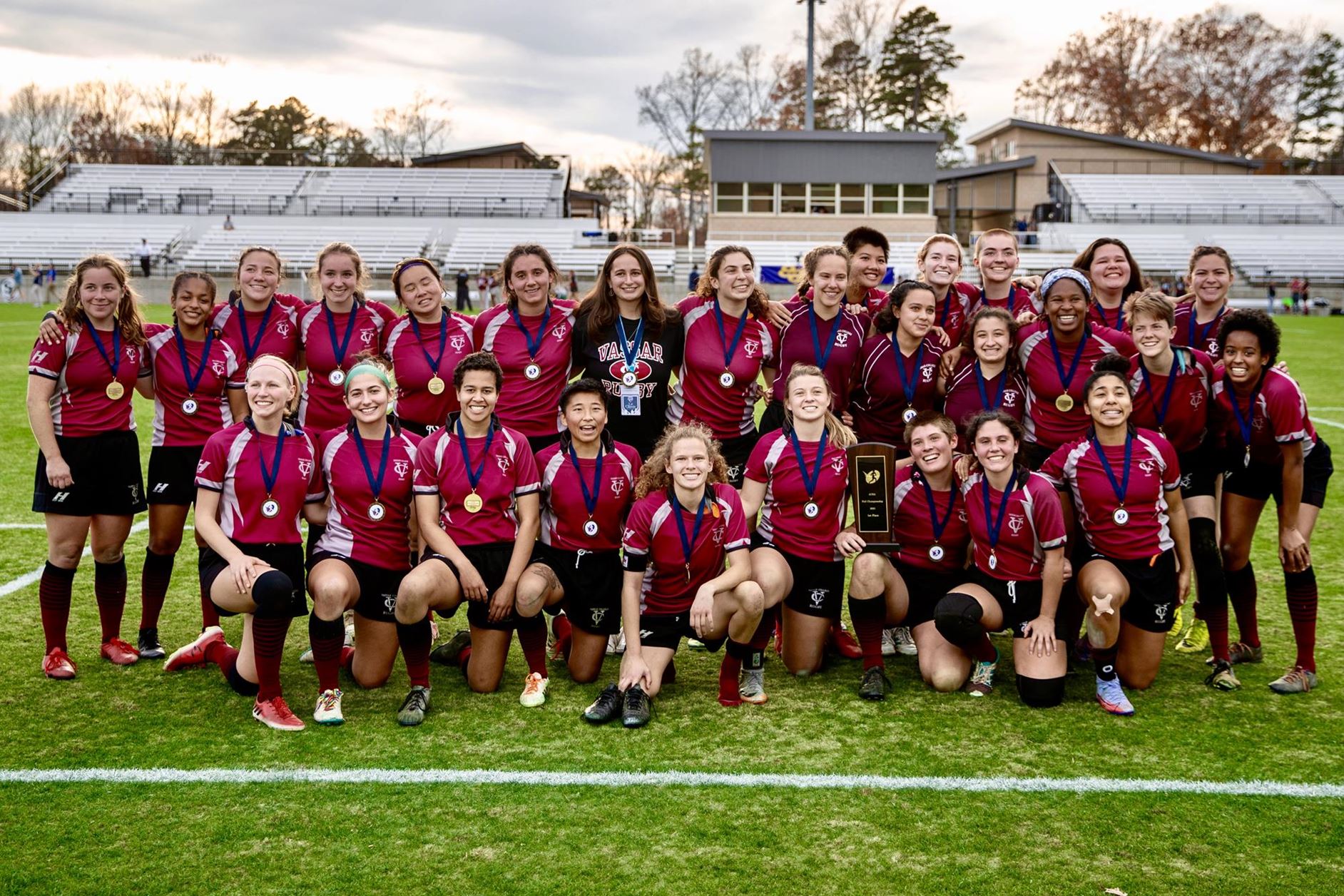 Matthews, N.C. – On a beautiful 70-degree fall afternoon in North Carolina, the Vassar College women ran out convincing winners in the American Collegiate Rugby Association Championship game. They faced a young and exuberant Temple University XV, with whom they had formed a pre-game TikTok relationship! With a display that included 7 tries scored by the back division and 5 from the forwards, Vassar dispelled the perception that they are just a picking team.

Vassar hit the field running, scoring 3 tries in the first 15 minutes and not only did it settle their nerves, but it also dealt a blow to any aspirations that Temple had of a Cinderella finish to their season. The Owls had defeated the University of Vermont 19-17 in an emotional comeback semifinal game two weeks earlier.

On the other side of the draw, the US Coast Guard Academy defeated the Colorado School of Mines before they fell to Vassar. If truth be told, Coast Guard’s Conference Final loss to the University of Vermont, a side they had defeated in the regular season, put them in Vassar’s bracket and that resulted in their not making the final. Such are the vagaries of sport.

Temple put in some strong tackles on the fringes, but Vassar’s ball placement prevailed, and the Brewers were able to recycle possession and maintain constant pressure on their young opponents. Vassar’s #9, Julia Busby, had an outstanding afternoon distributing to forwards and backs with the authority one would expect of a senior. Interestingly, the former wing has only played nine games at scrum half, all of them this season! Behind a dominant pack, she also collected a hat-trick of tries.

Emily Howell, the MVP of the championship game, also scored three beautiful tries. The Vassar 8-9-10 axis was at the center of everything productive. At flyhalf, Marie Claire Cicenia had one of her best games of the season and also slaughtered 7 conversions. Often less-noticed are her very competent defensive abilities, and she consistently put in solid tackles.

By the half, it was 38-0 and the Temple team was completely stunned. To their credit, the first 20 minutes of the second 40 not only saw them battle much more competitively, but they scored a good try for their work.

Up front, Vassar had been concerned that the strong and larger Temple pack might pose problems, but stellar performances from the front five ensured that there was a good quality ball provided. Sophia Florida at loose head, Hannah Thompson at hooker, and Asia Baker at tight head never took a backwards step, and in fact, both Thompson and Baker got over the whitewash.

The Vassar back division also had a good day, with Vivika Sheppard powering over for two tries, skipper Kira Nolan getting one, and rookie Claire Zickl sprinting in for a score of her own.

When a team wins so emphatically, in this case scoring 12 tries, there can be little criticism leveled. However, what was particularly pleasing was the shape and cohesion shown by the entire 23. In 2018, the Vassar Women won the USA Rugby National Fall Collegiate Women’s Division II Championship, defeating Winona State 50-13. This time around, Vassar again had to defeat the US Coast Guard Academy, and 3 of the Final Four teams were the same as in 2018, so while the final game wasn’t as tough, the achievement deserves recognition.

This Fall season, for all collegiate teams, has been a massive challenge on a number of levels. The return to rugby after the loss of the 2020-21 academic year was particularly difficult for club sports teams, as the majority of experienced players had graduated. This left a void of on- and off-field leadership allied with substantially fewer games under their belts. In addition, teams were disrupted by COVID-19 precautions and restrictions. The Vassar team was extremely fortunate with the return of a good leadership group, and even though some playing areas were inexperienced and sparse, it was clear that the gaps could be closed game by game. Thanks are due to the school administration and Vassar Athletics in particular for ensuring that the players had a full schedule.

A lot of people are involved directly and indirectly with the success of a team and a championship event, and there is a lot of work that goes on behind the scenes. Vassar is fortunate to have an incredible alumni network, and their support has been unwavering. This team is immensely grateful for all those who have helped them experience this championship and success. Special mention is due to Charlie Williams ’80, Michael Cesta ’83, and Vandana Sinha ’82 for their love and support. Also, thank you to all the parents and alumni who travelled to Matthews and cheered the team on.

Congratulations to the entire squad for everyone has contributed to this outstanding season that culminated in this American Collegiate Rugby Association Women’s Division II Fall Championship!

What a way to come back after 18 months of disruption. Go Brewers!