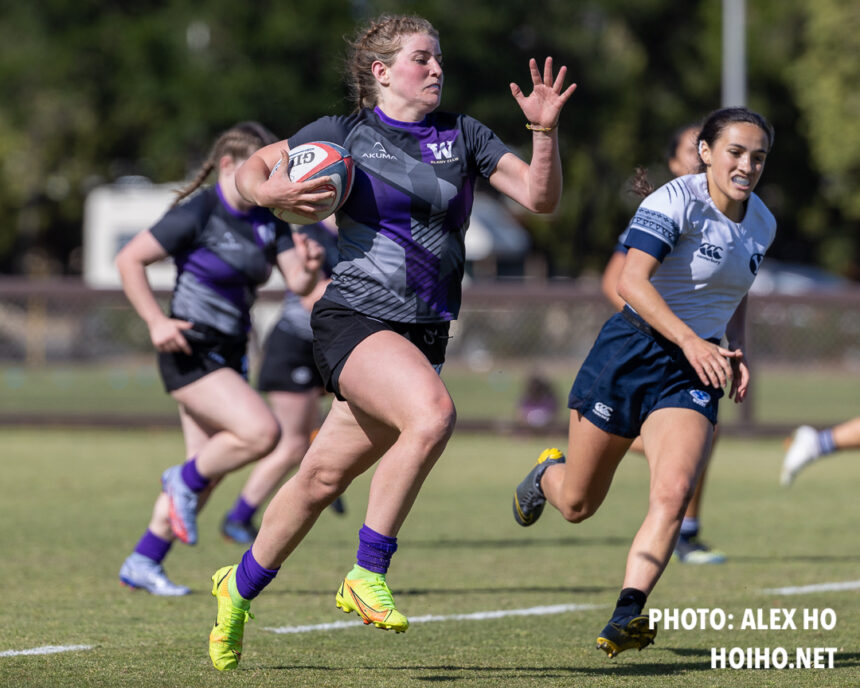 The following highlights a few key rugby games – namely those with playoff implications – that occurred last Friday-Sunday, April 15-17. For a full recap of scores, click here.

The DI Elite National 15s Championship held its semifinals on Saturday, with the higher seeds hosting. Top-ranked Lindenwood University beat #4 Penn State 92-0, and #2 Life University bested #3 Central Washington 38-0. The Lions and Running Eagles face each other April 30 in Houston for the national title.

The CRAA held its eastern and western regional playoffs for the DI Spring Championship. (Remember: This competition is not “nationals,” but a spring-season championship. The other half of CRAA’s DI membership played toward a Fall Championship, and Navy won that trophy in December.) In the west, Grand Canyon edged Stanford 26-24 for the most thrilling game of the weekend. But in the end, BYU dominated Palo Alto, Calif., defeating Univ. Washington 80-3 and then Grand Canyon 67-3 for the berth to the DI spring final (April 30 @ Houston). See brackets. 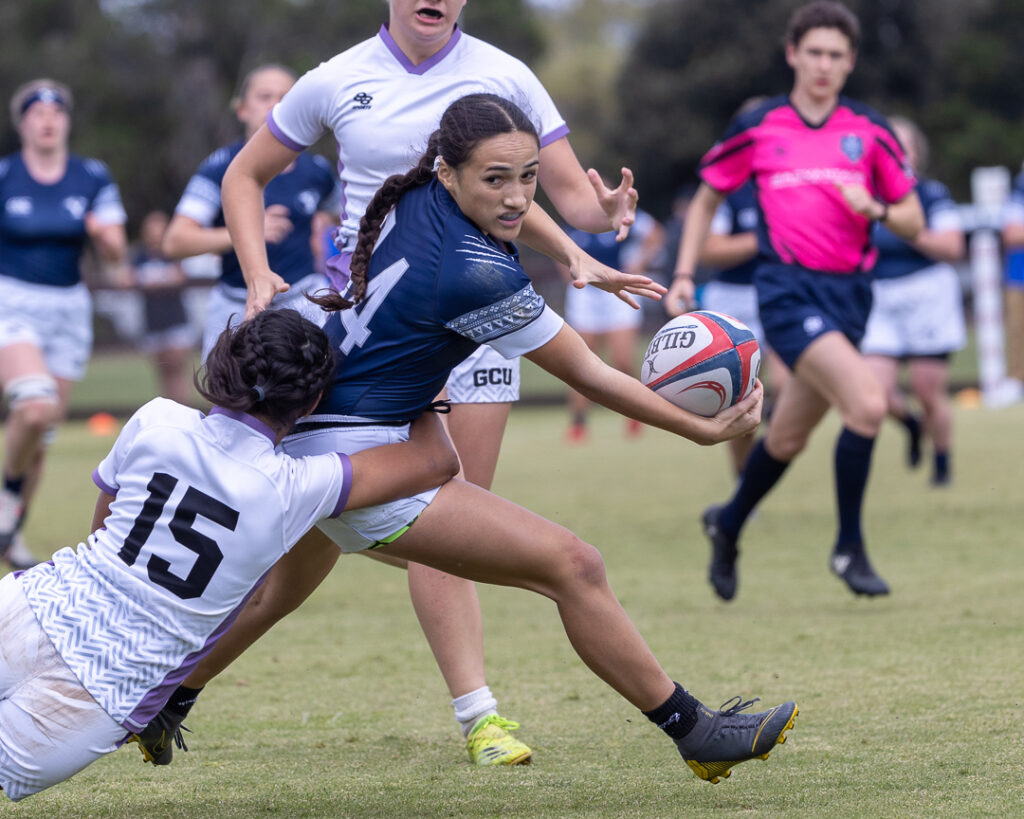 Virginia Women’s Rugby (aka, UVA) had an equally successful outing in the east, beating UNC 64-5 on day one and then Virginia Tech 24-0 on day two. After winning the east’s berth to the DI spring championship, UVA announced that it would not be traveling to Houston (read more). CRAA is now looking for a replacement for the April 30 final.

The CRAA DII Spring Championship (same as DI, “nationals” is a misnomer, as Vassar College won the DII Fall Championship) named is fourth and final semifinalist when American University defeated Univ. Mary Washington 67-5 in the Capital conference final. See brackets. The DII competition is a two-day affair in Houston, and the semifinals occur on Friday, April 29, and the final is on Saturday, April 30.

There are four major college 7s tournaments / championships occurring between April 30-May 30, and teams are qualifying for them every weekend. See the combined the listing, which is inevitably incomplete and updated as soon as new info appears.

The NCR Small College National 7s Championship added Great Waters champion Univ. Chicago to its lineup. Air Force booked its spot to the Rugby 7s College Championship after winning the Rocky Mountain DI qualifier final 20-7 against Utah State. Colorado Mesa State won the DII berth and will represent the conference at the CRAA/ACRA championship at the U.S. Coast Guard Academy on May 1. [CRC 7s is the fourth tournament, and this weekend is a big one for DI club qualifiers.]

DIVISION I … The top-three teams in the DI East had already been decided (#1 NOVA, #2 Raleigh, #3 Atlanta) and the winner of Philadelphia vs. Boston was poised to take the fourth seed to the Atlantic Super Regional. Philadelphia won 41-19 and thus booked its trip to the April 30-May 1 playoffs in East Aurora, N.Y. See bracket.

Also, some (but not full) clarity on the Pacific Super Regional has emerged (thank you, Portland president Jessie Enriquez!) and has been added to the DI and DII brackets.

It was Week 2 for the elite competition, and Life West and Beantown played the tightest game of the weekend, with the Gladiatrix winning 17-10. New York and Berkeley improved to 2-0, defeating Twin Cities 52-7 and Atlanta 51-0, respectively. And San Diego got its first win of the season with a 61-12 victory over visiting ORSU. Read more. [Note: TRB produces the weekly recaps that feature on USA Rugby’s and WPL’s websites / socials.]

There were certainly high school games all across the country last weekend (see scores for an overview), but leagues still have some time before playoff rugby. In terms of competitive results, the closest 15s game occurred between Mentor (17) and Medina (14) in Rugby Ohio. 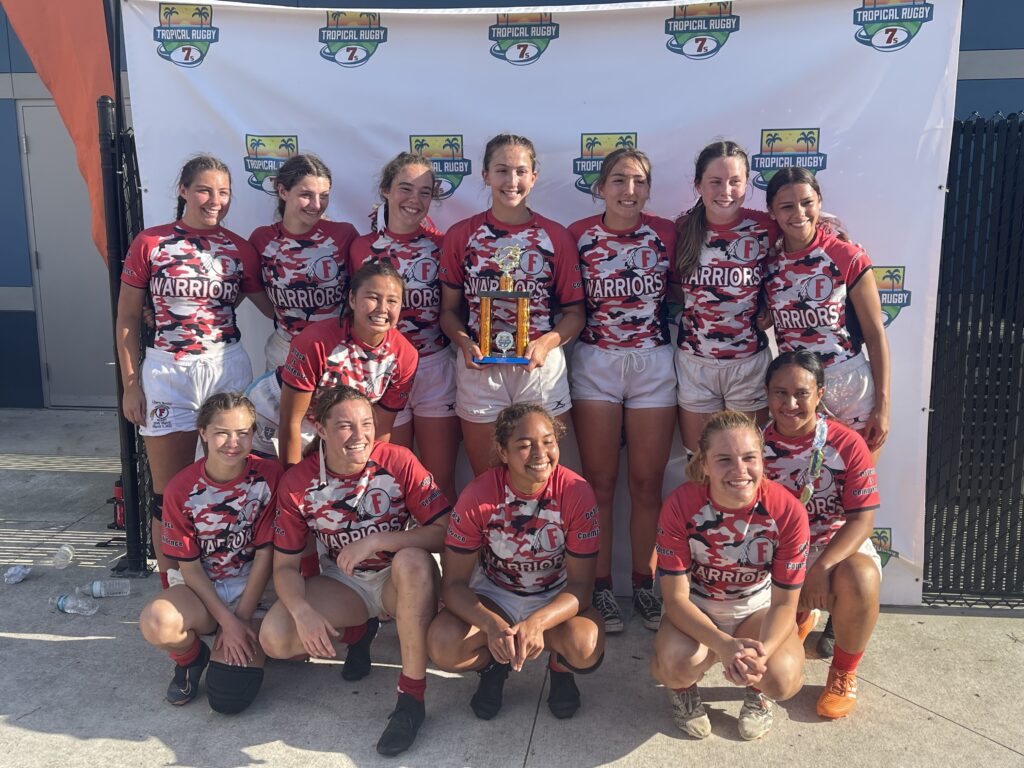 Fallbrook won the U18 Elite title

Much attention turned to the Tropical 7s, where stand-alone and select side teams funnel for the Easter weekend. There were five competitions for girls and women’s teams:


Midwest HS 15s Championship is Back in Full