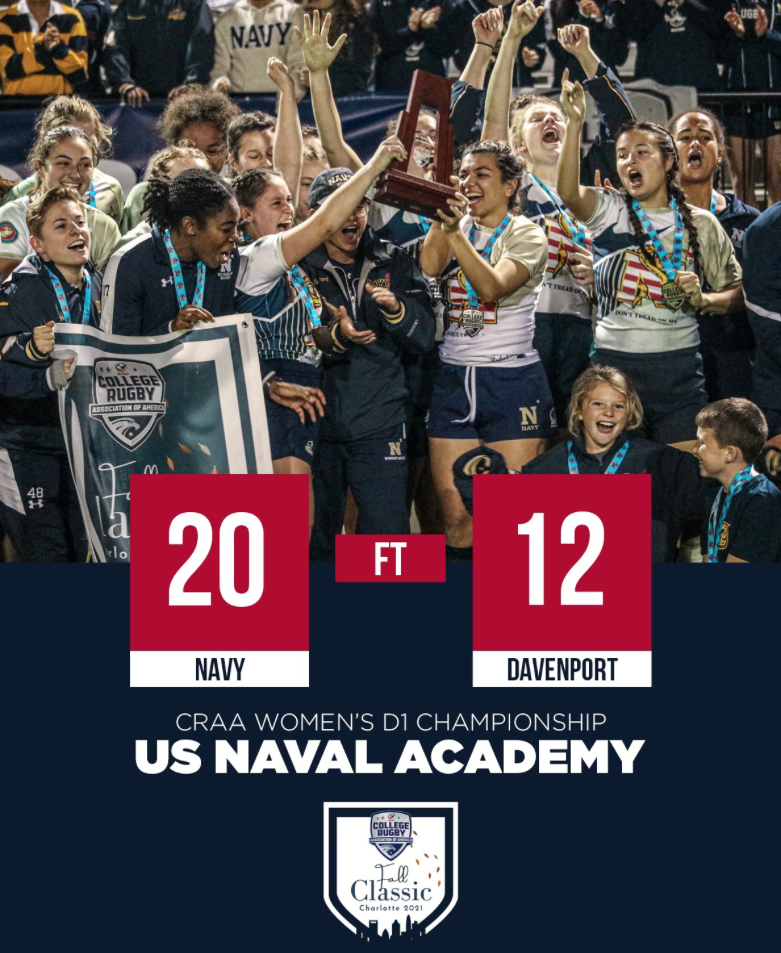 The U.S. Naval Academy won its first-ever 15s championship, defeating Davenport University 20-12 in the College Rugby Association of America (CRAA) final. The title bout was part of the CRAA Fall Classic, held Dec. 4-5 in Matthews, N.C., and marked the most competitive contest of the weekend.

Navy and Davenport last played each other in the 2019 DI fall quarterfinals in Poughkeepsie, N.Y. The Midshipmen won that match 45-22 and advanced to the fall championship, where Navy lost a 26-10 contest to the U.S. Air Force Academy.

“[T]here was a little trepidation that held us back,” Navy co-captain Sarah Skinner reflected on lessons from 2019. “[Air Force is] a service academy like us, meaning they were most likely going to be as fit as us and would be able to keep up with us all 80 minutes of the game. We had played them previously, lost, and were afraid of another loss, especially at a high-stakes game like the [fall] National Championship.

“What we have learned is that when we focus on ourselves and what Navy can do, we perform our best,” the senior No. 8 continued. “So this year, we weren’t going to underestimate Davenport, but instead, we would focus on our game like we had the entire season. It was that shift in mentality that gave us the confidence and grit to pull out a win this year, especially when Davenport shocked us with a try in the first three minutes.”

Davenport, too, had changed since its 2019 meeting with Navy. Those green freshmen and sophomores are now the Panthers’ leaders, and they drove a dominant season this fall. From the opening kickoff, Davenport’s speed showed itself as wing Lauren Peterson and fullback Megan Bird made big gains. Flyer Grace Gohl then dotted down for the opening try, and that early deficit snapped Navy to attention.

“[W]e knew Davenport had some very fast players and great passers,” Navy flanker and co-captain Aimee Dalsimer explained. “We focused mainly on shutting down these players by doing the same things we had worked on all season – launching quickly and aligned on defense. This shut down some of their passes to the outside and caused multiple loose balls. We focus a lot on fitness and a high work rate, which meant we were able to adjust to their plays and make good tackles until the last minute.”

Navy answered with back-to-back tries from Skinner and lock Rebecca Peasley, and the Midshipmen led 10-5. The battle was on and two more lead changes followed, as prop Olivia Farkas dove over and flanker Ashleigh DeWitt converted to put Davenport up 12-10. Before the break, the always-eager Skinner quick-tapped through a penalty and targeted a slowly retreating defense, which produced a yellow card. Wing Ana Olszewski scored in the corner: 15-12 to Navy into the half.

Davenport scrumhalf Aubrey Crist – who is already a confident halfback as a freshman – left the game with an injury and Addy Ochoa moved to the halfback position for the remainder of the second half. Ochoa usually plays flyhalf and is used to these decision-making roles, but any change would have shifted the flow of the game. Navy had to make adjustments as well, and the replacements made the most of the opportunity to impact the game.

“When one of our props was injured and some substitutions were made, we had a younger front row with Lindy Gostage and Joy Ochieng, but each of these players brought important energy and fresh legs to the field,” Dalsimer praised standout performances. “Eliza Herring and Marissa Meyer consistently made great tackles behind the other team’s gain line. Marissa, Charlotte D’Halluin and Sarah Skinner’s line-breaks were integral to our offensive game. Jiji Kim and Ana Olszewski on the wings brought incredible speed and multiple try-saving tackles.”

It was a defensive battle in the final 40, but Navy was able to score one more try through championship MVP Skinner. Navy then held on for the 20-12 win.

“Grit and teamwork were the reason we won the match. Staying with one another and keeping our intensity up on offense and defense left little room for Davenport to break our wall or steal the ball,” Dalsimer talked deciding factors. “After injuries and mistakes, our team worked twice as hard rather than getting frustrated. We put our hearts into the game, and it showed throughout the game.”

“I am incredibly proud of our team and this moment in Navy Women’s Rugby history,” Dalsimer closed. “It is amazing to see how much the team has grown since our plebe year, mainly due to our amazing coaching staff and the legacy previous players left for us to follow.”

“Our team motto is ‘love the legacy,’ and while Aimee and I are the first to captain Navy to a championship win, we know this would not have been possible without every single woman who came before us,” Skinner added. “Our team had received tremendous support throughout the entire season, which has given us the intense motivation to leave everything out on the field. I am so proud of every single player on our team, and being able to lead them alongside Aimee was an honor.”