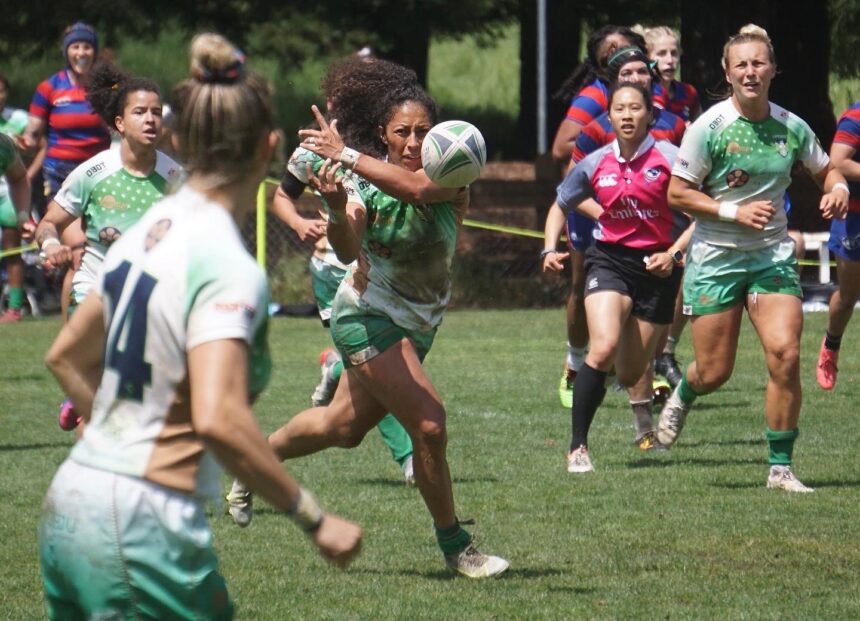 Week 2 of the Women’s Premier League (WPL) saw a couple more teams play their first rugby games of the season, and also showed the range of return-to-play readiness across the field.

Life West (2-0) and Beantown (0-1) opened their seasons against each other (Life West’s first victory was a forfeit win), and played the most competitive game of the weekend. Both teams held the lead at one point, but the Californians held on for the 17-10 win, while Beantown banked the bonus point in the loss.

“It’s the beginning of the season, so we wanted to keep it quite simple and find our baseline as a team,” new Life West head coach Tiff Faaee said. “It was giving each unit 2-3 goals just to see if they could execute, and for me, it was just watching how they problem-solve. It’s our first game together. If you look at the personnel, they’re a very talented group, and the challenge is – especially since the WPL season is quite short – building that cohesion so we can really start humming come nationals.”

Three minutes in, Life West outside center Julie Tordonato scored and flyhalf McKenzie Hawkins added the conversion, 7-0. They’re two of three former Colorado Gray Wolves (wing KB Broughton being the third) who are in the Bay Area this season. Beantown answered back quickly, as scrumhalf Bridget Kahele scored a centered try. The 7-5 scoreline held for another 20 minutes, until a couple of penalties allowed WPL debutant Emily Prentice to go quickly and dive over the line, 10-7 to Beantown.

A few minutes later, the home side retook the lead through wing Kayla Lawson, who transferred from San Diego, as did Bailey Johnson: 12-10 into the break.

“I thought they did a good job in the second half. The first half was a little bit all over the place, but that’s kind of expected,” Faaee reflected on halftime conversations. “And for me, coming from New York and Beantown being an old rival, I knew this was going to be a very physical game. … So it was reminding them that resiliency is always important against a team like Beantown, because they’ll play until the last minute.”

Those words couldn’t have been more prophetic. Life West added some cushion five minutes after the break, as fullback Leti Hingano scored (17-10). But Beantown never eased. The forwards stood up, getting good meters through players like No. 8 Yeja Dunn in the first half, as well as hooker Kathryn Treder, flanker Claire Stingley and WPL newcomer Megan Pinson, who was so good in the lineout. Kahele was fast off the back, and flyhalf Rachael Harkavy did a nice job with the tactical kicking.

But some possession woes hurt Beantown late in the game, and a couple of scoring opportunities were thwarted by players like Bitsy Cairns, who is always in good position for a poach. The game ended with Beantown attacking the line, but the pack defense prevailed: 17-10 the final. 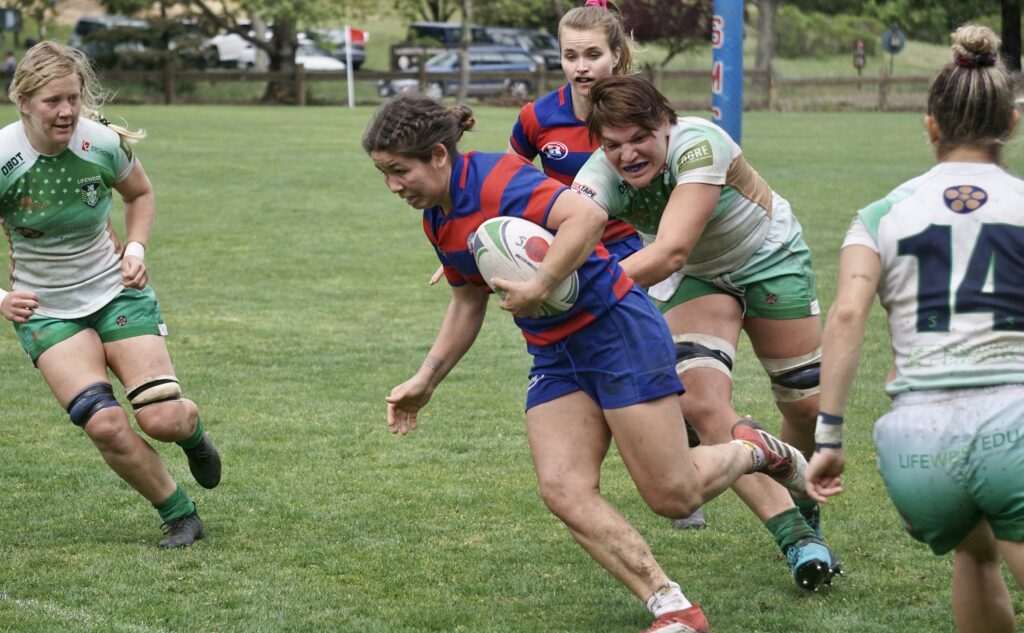 “I thought it was incredible,” Beantown head coach Chris Mutty said. “Life West really brought it, and we matched their intensity in every aspect of the game. Just a couple things didn’t go our way and otherwise I think we would have had a different result.

“Definitely playing tired,” Mutty said of work-ons going forward. “So maybe picking up the intensity at practice so that when we’re in those late-game decision-making situations, we’re not necessarily making mistakes leading to turnovers. We saw a lot of those late in the game, especially in our attacking zone, and that’s where we can’t afford to give the ball up.”

USA Women’s National Team head coach Rob Cain was also in attendance and could see the makings of a WPL final in that performance. Cain then flew south to San Diego (1-1) for the Surfers’ match against Oregon Rugby Sports Union (0-2). The home side prevailed 61-12.

“Whilst we were disappointed with the result last weekend, several lessons were learned that we were able to rectify,” San Diego head coach Jarrod Faul referenced the Week 1 loss to New York. “Defensively, we were off the mark last weekend and this week we took a step forward in improving issues.

“Today, we did a better job in playing what we trained this week and managed to keep our penalty and turnover rate down,” the coach continued. “Our goal was to play with tempo and be more patient in our attack, build phases and ultimately convert opportunities into points.”

“We’re looking to see more improvements and confidence in our set piece as the weeks go on but I’m proud of what we accomplished today,” the lock added. “I also have to give it to ORSU. They always play hard and assertive, it’s never an easy game. I look forward to playing them again up North in a few weeks.”

On the other side of the country, Red Conference leader New York (2-0) welcomed Twin Cities (0-1) for the Amazons’ season opener. The hosts won 52-7.

“The 2022 Amazons are a 20/80 mix with 20% WPL experience and 80% first WPL season,” Twin Cities head coach Rebecca Radtke explained. “This mix has been a fun group to work with because they do not know what they do not know and have a fresh new feel for the game.”

Radtke called out Katrina Anderson (who played in the WPL Selects game against the USA Falcons), Lynn Kleyer, Brooke Doerscher and Emily Johnston – young players who have had a positive impact on the game. And then veteran leaders like Ali Gillberg and Katherine Johnson (who was unavailable for New York) bring perspective, and they’re the example-setters for this growth-minded season.

Twin Cities outside center Kleyer accounted for the game-ending try and conversion, and flankers Anderson and Doerscher were recognized for their defensive efforts on the day.

Down South, Atlanta (0-1) played its first game of the season against Berkeley (2-0), which took its first win of the season as a forfeit from Chicago North Shore. The Harlequins filled out its roster with Life University players, who are in-season with the DI Elite. (On Saturday, the Running Eagles beat Central Washington 38-0 for a berth to the national championship against Lindenwood). On Sunday, six of eight starting forwards were Life student-athletes, while the backs (save Pepe Toomalatai) were current Quins. Another five Life players were rostered as reserves.

“We have set a goal for ourselves to come out really strong in the first 20 minutes,” Berkeley head coach Hannah Stolba said of the pre-game mindset. “The girls set that for themselves because they’ve recognized that in the past Berkeley hasn’t always started the strongest, but they’ve had a really good finish. So they wanted to set themselves up that way.”

The All Blues scored three tries in the first quarter. Evan Hoese, Florence Gomez, Kristen Siano (who also handled kicking duties), Jade McGrath and Lauren Rhode were among the try-scorers in the 51-0 win. This weekend, Berkeley lines up against Life West, which will be a good gauge for the All Blues.

Atlanta’s WPL manager and flyhalf, Corinne Heavner, explained that the Quins will likely have to forfeit the next two matches. Life is readying for its national championship on April 30 and risks injury if it lends players during the run-up to the title match. And then the Harlequins’ Division I team is heading to the Atlantic Super Regionals on April 30-May 1 (East Aurora, N.Y.), further restricting the player pool. By the May 8 match against Life West, Atlanta is hoping to be more whole.