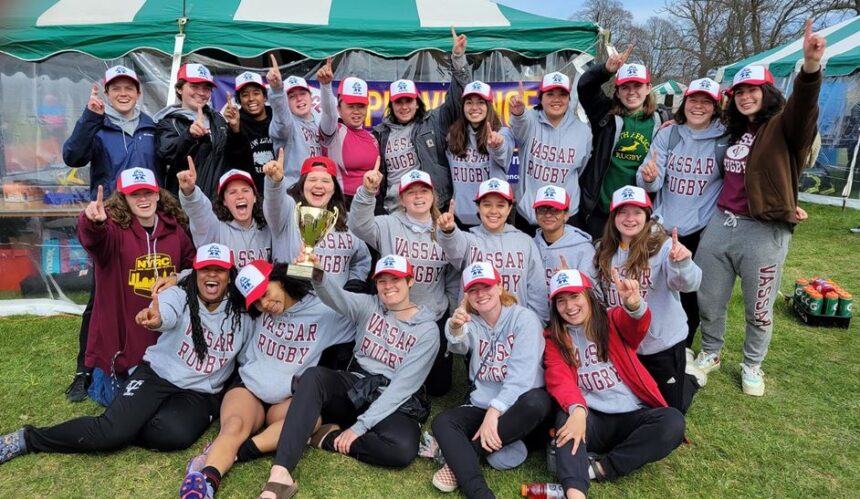 Beast of the East is a huge collegiate rugby tournament in Portsmouth, R.I., that fields multiple men’s and women’s 15s and 7s divisions, as well as U19 competitions. Vassar College won top honors, going 4-0 against Southern Connecticut 69-0 and DI Boston College 70-0 on Saturday, and then beating DI UCONN 53-0 in the semifinals and Marist 71-7 in the final.

PRESS RELEASE – Maybe there was something in the water that the Vassar players were drinking at The Beast of the East Tournament or perhaps the squad was just so overjoyed that they were playing 15s again but whatever the reason the effect was stunning. The Brewers faced UConn in the semifinal of the tournament and whereas in the past results have been close and measured by a single try, conversion or penalty kick, this turned into a rout. The Huskies shipped 9 tries and Vassar pitched a shutout!

Those who know the fields at the Beast in the Gardener Seveney Sports Complex will recall that there is quite a slope and it can be daunting to play up the grade. Vassar took the field against UConn and not only was the team appreciably smaller in height but the Brewers would be playing uphill.

But the die was cast early as the Brewers scored probably the best try of the day when Izzy Snyder darted through and veered away from the cover defense about 40 yards out. She offloaded in the tackle to Caeli Porette, her center partner and the rugby newcomer needed no further invitation as they tore past the bewildered UConn defense to give Vassar a 5-0 lead. Julia Reigrut slotted the conversion and it was 7-0 playing uphill and into the wind!

Emily Howell collected the second try for the Brewers and she would celebrate breaking the college record for number of tries scored in a single season in this game. This put her at 44 and tied for the record but later she scampered over to massive cheers to get number 45.

The Vassar forwards destroyed the UConn pack in the set piece and at the breakdown as they rucked furiously. The focus was on close support when they had the ball and competition when UConn went to ground. The tackling could have been better as UConn ball carriers sometimes made good yards after contact but when they went to ground Vassar was highly competitive.

Vassar kept things simple although they put the ball wide a tad earlier than was necessary and it produced a few anxious moments. Kasey Drake at 10 steadied the ship early in the second half using Snyder to good effect.

Vivika Sheppard was rock solid at the back and on the times when UConn kicked she was dangerous on the return. She scored a brace of tries using her strong running and pace to good effect.

But the high scorer for Vassar was number 13 Caeli Porette. In this their third game of rugby 15s ever they scored 4 tries. To say that their lines of running were a tad unorthodox is both a criticism and a compliment. At the end of the day if one is able to wrong foot an opponent and create a line break who is to say the line was not correct! Kudos to the novice and long may the elusiveness continue!

UConn had no answer to the pace and ferocity of the Vassar rucking. This in turn produced good quality fast ball and Julian Busby was dynamite at 9 varying her attack options. Forwards running one out stretched the UConn defense and the scrumhalf’s occasional sniping run caught them drifting so she made big gains and was well supported by the Vassar forwards.

Prop Sophia Florida together with locks Grace Skakel and Louise Ambler were outstanding in the rucks and if called upon to carry the ball. Asia Baker, drafted in to play flanker, was excellent as well.

This team, and in fact the entire squad, has realized that ball placement, body position in rucks, close support and a solid set piece will ensure they are highly competitive against any opponent.

The emphatic win set up a final against Poughkeepsie town rivals Marist College who had defeated UMass., Amherst, 12-5, to earn their place in the championship game.

VASSAR BEAST OF THE EAST CHAMPIONS AGAIN
Portsmouth, RI – There was going to be no stopping the Vassar Women now that they had swept aside UConn. The confidence was palpable and even though the Marist College Women are hard hitters and the teams know each other well so they knew what was coming the tsunami was cresting as the game kicked off.

Porette scored 6 tries! Count ’em 6! Remember this is just their 4th game of 15s rugby. Sure the ball was won by the forwards, distributed by Julia Busby at 9 and then Kasey Drake at 10 but 6 tries is impressive to say the least.

The Vassar pack went into overdrive and smashed forward. Busby was majestic at 9 and every time Vassar scored Julia Reigrut converted the try or came within a whisper. Lauren Showalter was at her best straightening and beating defenders and mistakes were not on the agenda. Kasey Drake continued to boss the game and had a couple of penetrating runs that kept the Marist defense honest.

Vivika Sheppard at 15 rounded off the tournament with some challenging runs that would have brought a smile to any Pacific Islanders face. She bounced tacklers off and made hard yards and was inspirational.

The phrase it’s a team game is often thrown around and lip service is paid to the fact that all contributed to the success. In rugby it is the very cornerstone of every possession and every facet of the game. After all, the team is trying to advance the ball forward by passing it backward and is facing 15 defenders who are physically tackling you and taking players to the ground.

So while the major plaudits go to the scorers there were contributions from all the squad that bode well for the future. Isabel Rodriguez had some strong runs and looks like an A-side center come wing in the making; Julie Geller came in at 9 and was more composed and made good passes; Katie Canavan tackled well; Peyton Wilder’s positioning is now better on the wing; Jamie Marinez made a couple of good pickups and tackles before spraining her ankle; Maddie Freundlich was direct and for a complete novice will be a good player next fall; Hannah Thompson caught every pass thrown her way and ran the show in the front row stealing opposition ball; Sam Tang had another 50 plus yard run being hauled down just short of the line but was a force in the pack; Zoe Lynch had some crunching tackles and cleaned up loose ball in defense; and Andi Authers worked hard in the set piece and loose. On the sideline Claire Zickl was scorekeeper, MC Cicenia ran the video, Liz Slein ran touch and Hannah Charlson was there for moral support i.e. she cheered! Congratulations one and all.