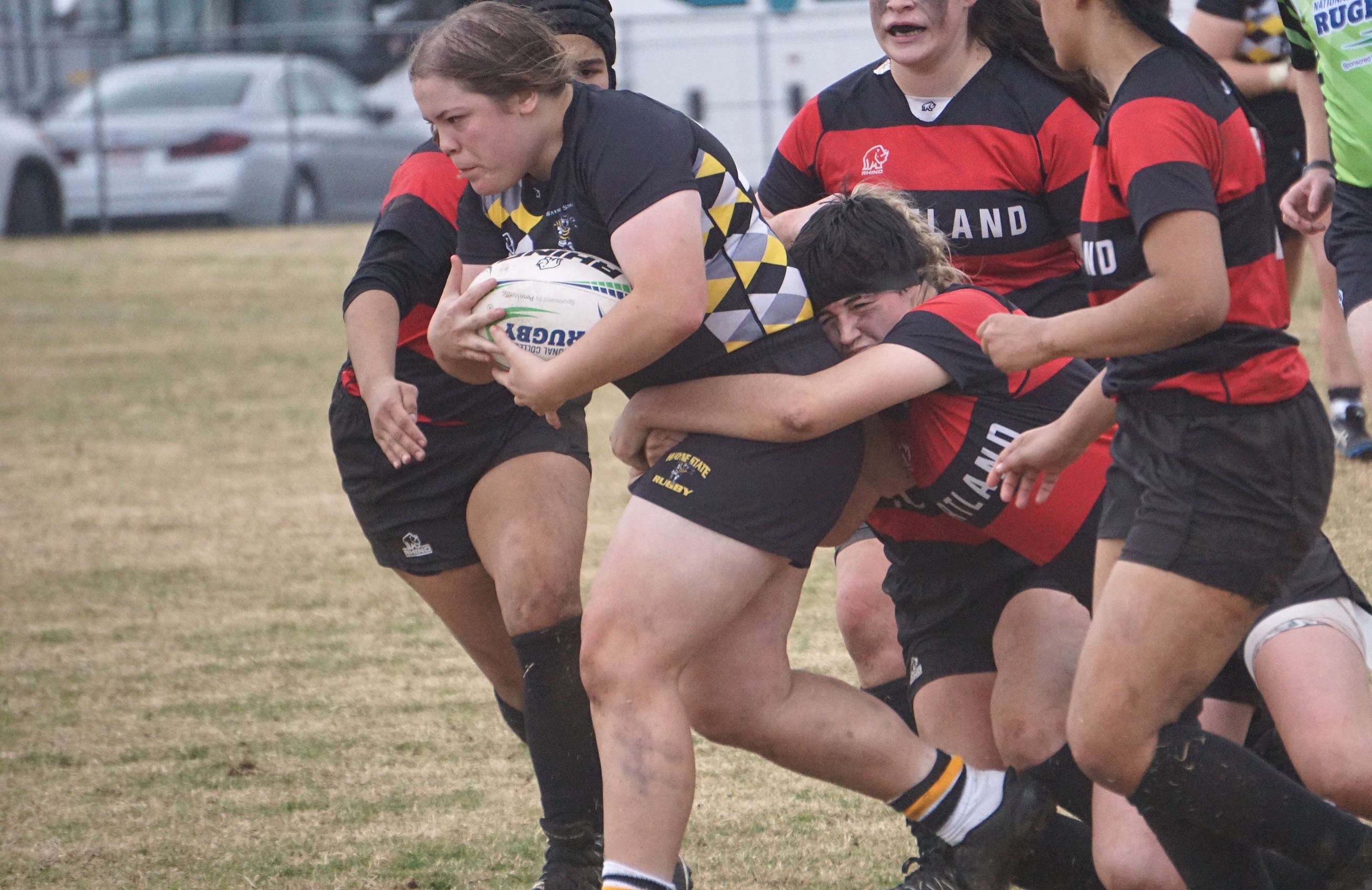 Wayne State College and SUNY Cortland were both undefeated as they traveled to Knoxville, Tenn., for the National Collegiate Rugby (NCR) Small College National Championship. During Saturday’s semifinals, the Wildcats beat Northern Michigan 96-5, while the Peace Frogs topped Lee University 39-12. On Sunday, the Wayne State College successfully defended its title with a 72-10 win against Cortland.

SUNY Cortland knew it was up against a dynasty, but the New Yorkers did not take the field with any sense of intimidation. Wayne State College started the game deep in Cortland’s end and then Claire Brandon nicked possession for a fast, nearly whole-field return. The pursuit made the tackle inside WSC’s 10 meter, but support was fast and the recycle moved to wing Caleigh Pfalzer for the try, 5-0. 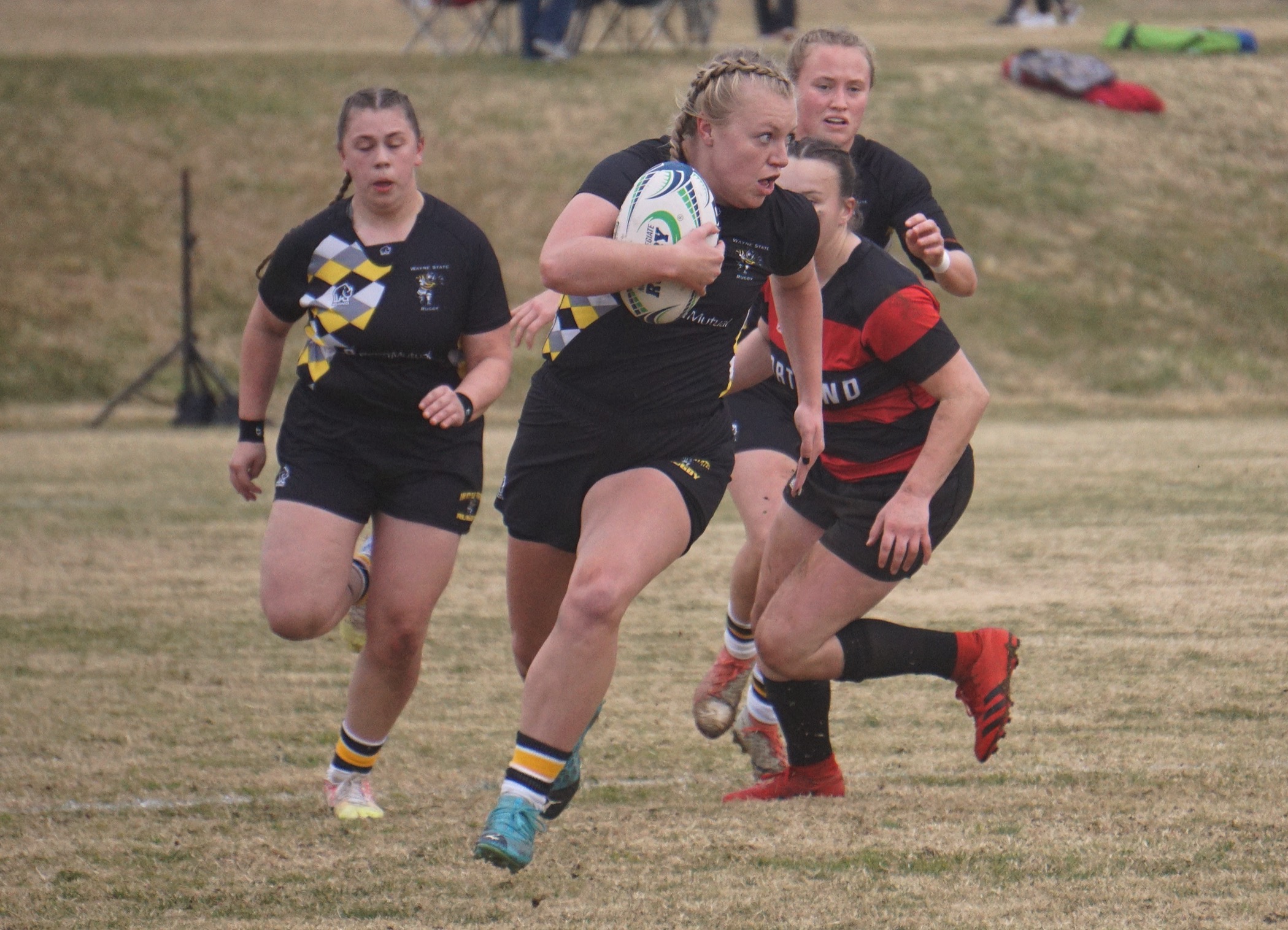 “I think we knew why they scored,” WSC backs captain Lauren Nelson said of the team’s reaction to the opening try. “It was something we talked about before coming into the game, so when that happened, we were like, ‘See, that’s what we were talking about, what we were preparing for. Fix it next time.’ … I think we were a little frustrated about that but we knew what we needed to do so we were just excited to fix it.”

A few minutes later, Wildcats pack captain Izzy Robinson scored the first of her three first-half tries, and scrumhalf Selma Taylor’s conversion put the Nebraska team up 7-5. The scoreboard was unchanged for the next 12 minutes or so, until Cortland committed a penalty in Robinson’s range. The prop knocked over the first of two penalty kicks, 10-5. 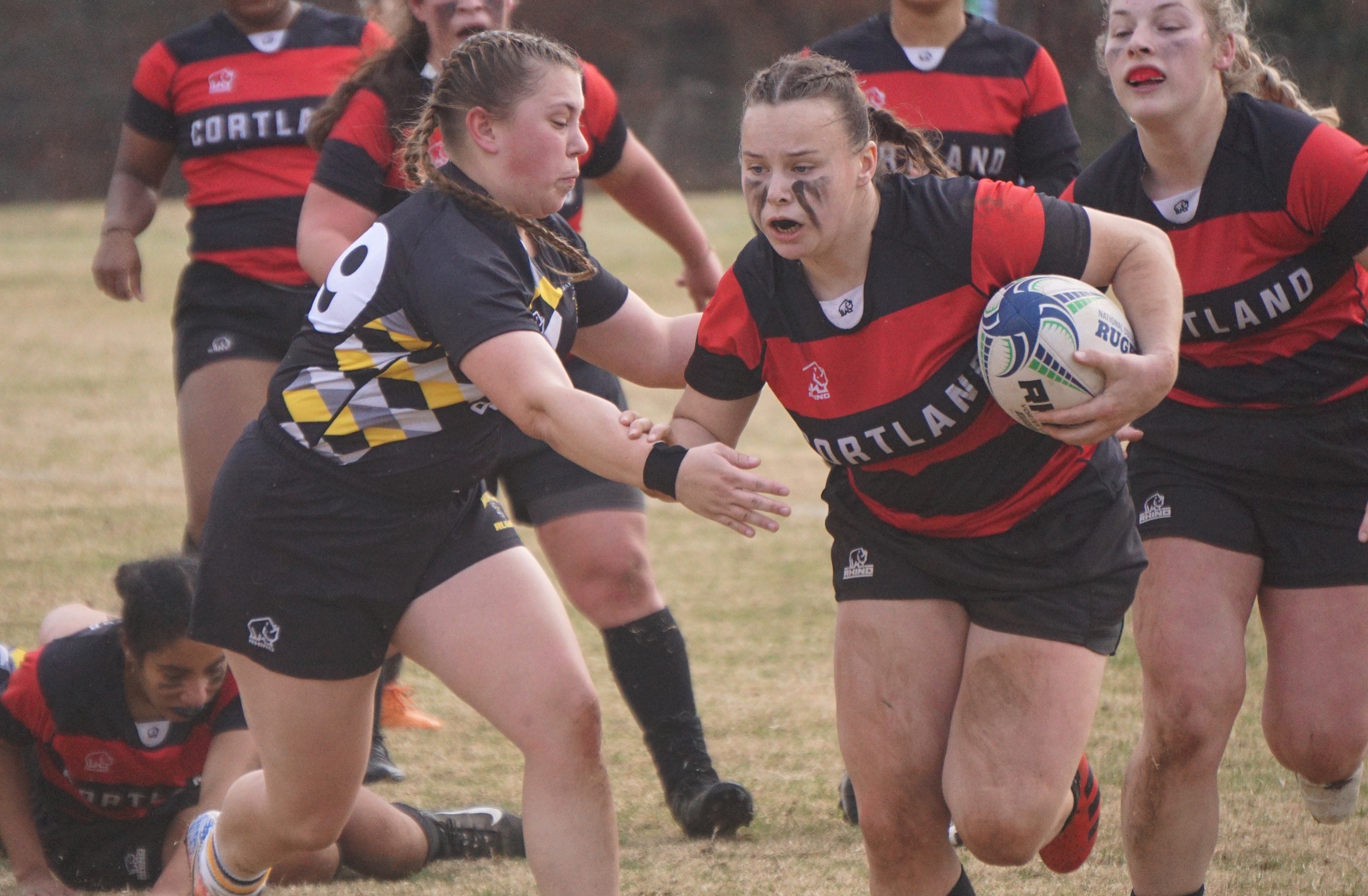 Wing Sarah Kelleher went on a long break down the sideline to put Cortland in good territory and then a high-tackle penalty allowed the team to reset and work the ball wide to Brandon, who had the wheels to the corner, 10-10.

“Over the years, we never really had a big challenge so that knocked some sense into us, the fact that they were a pretty good team,” Nelson said. “It made us realize that we really need to give this game our all.” 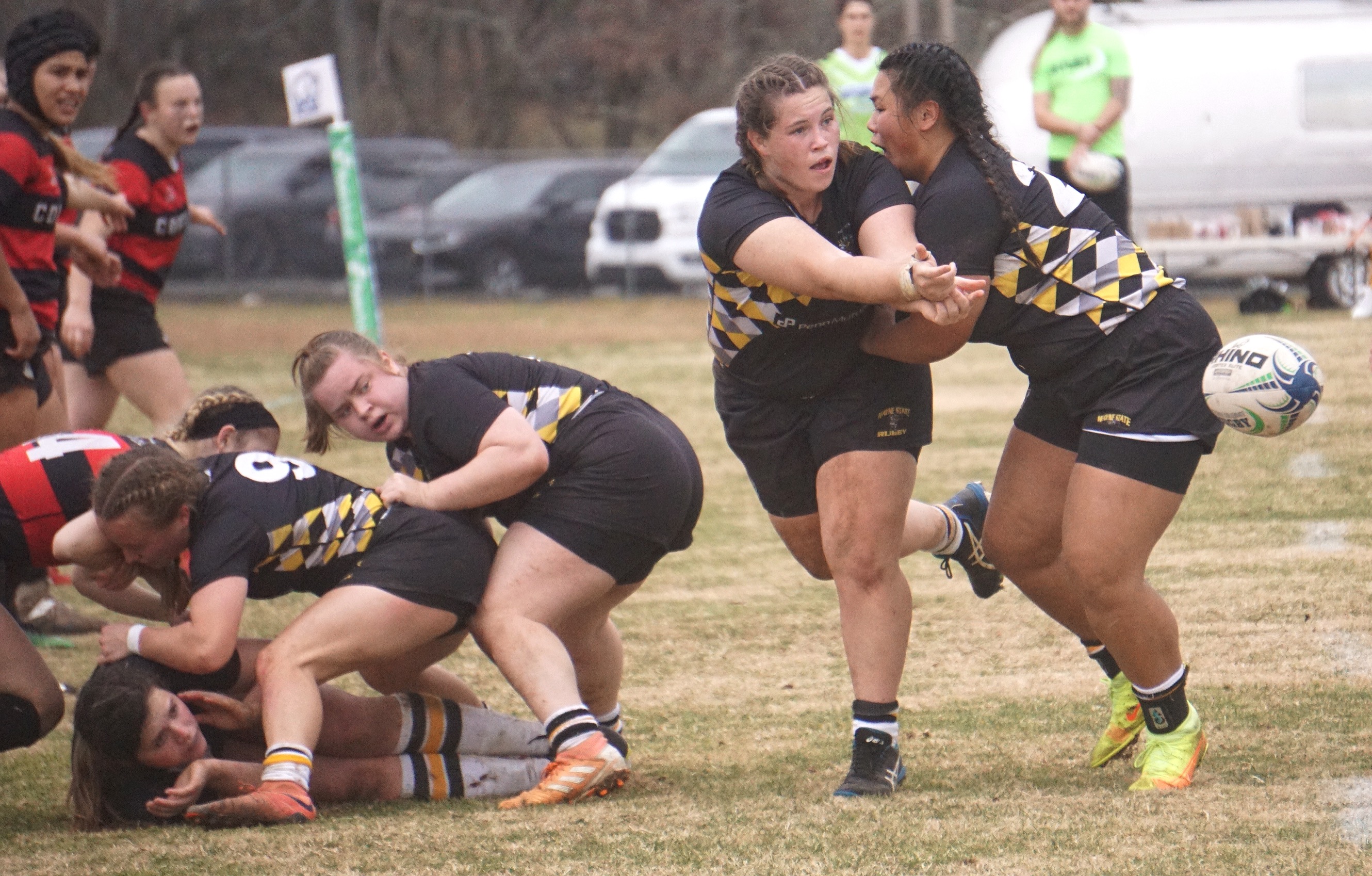 A couple minutes later, Robinson broke the tie after a high-tackle penalty set up an easy three-pointer (13-10). WSC started to play with more possession and ran some lovely set plays off of set pieces, but some finishing passes didn’t go to hand. In the final few minutes of the game, however, Robinson scored two tries and Taylor added a conversion for the 25-10 lead. To Nelson, those two tries showed the captain that the team was playing the game it was angling for.

“Mary Kahny is a sophomore but this is her first year of 15s because we had that Covid year,” Nelson said of standouts. “She did amazing today. Any time the ball was loose she was on it, and was always there for support. One of my rookies in the backline – Kailey [Pena] – I don’t think she missed a single tackle today. I didn’t know she was that good of a tackler but she came into these championship games and she was all about it.” 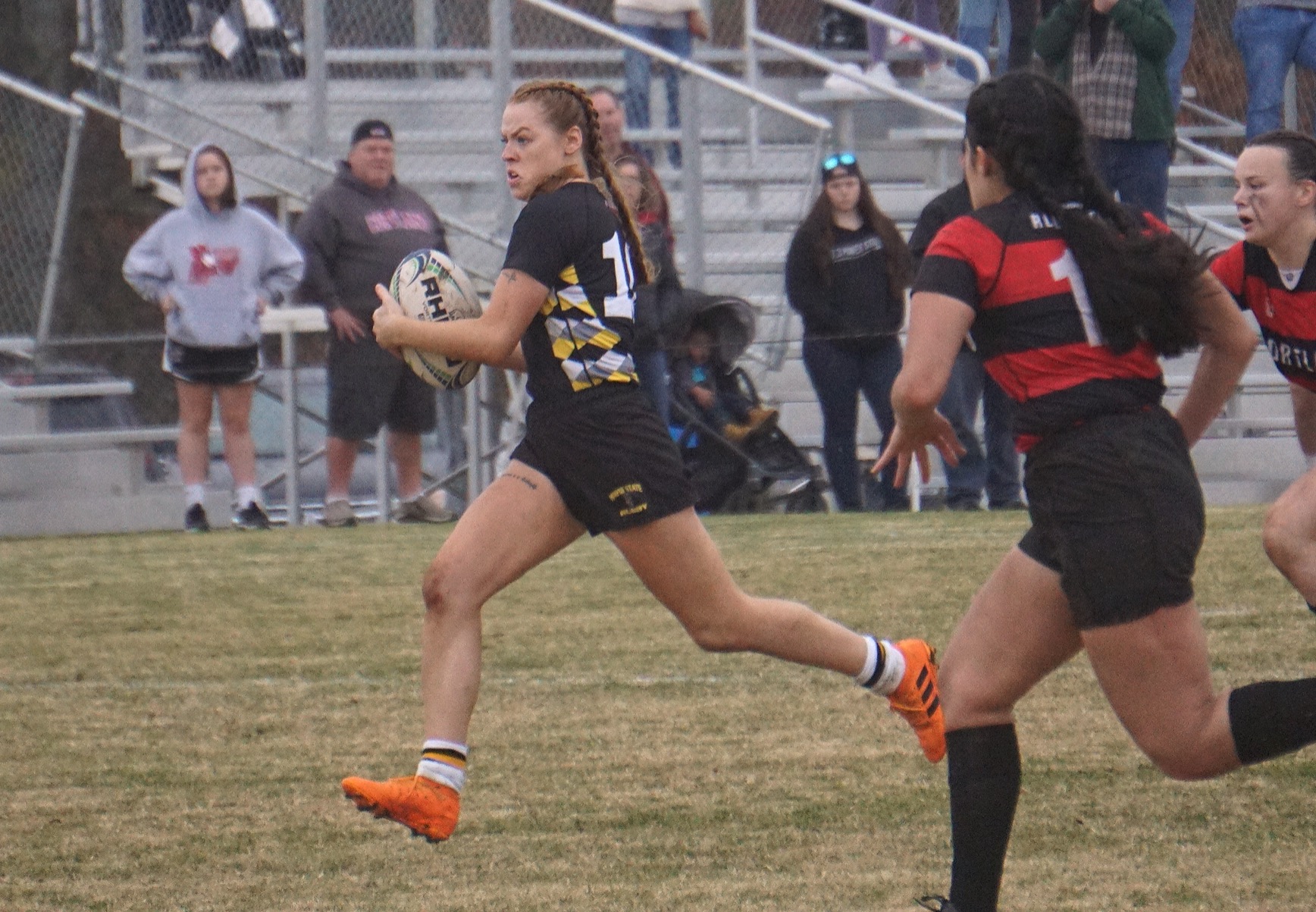 Wayne State College kept the pressure on in the second half, running in tries from inside center Phienix Svajgl, lock Taylor Ference, Taylor, Kahny and Nelson. There was also a penalty try (there were several yellow cards in the final 10 minutes of the game), and Taylor kicked three conversions for the 72-10 win.

Robinson was named championship MVP. For fellow captain Nelson, the final marked the graduating senior’s final game with the Wildcats.

“Well, it’s really sad to be leaving; that’s why all the tears,” Nelson said. “But I’m really thankful for all the time I had here and just finding this sport and the community in general. I feel like I ended up where I’m supposed to be.”