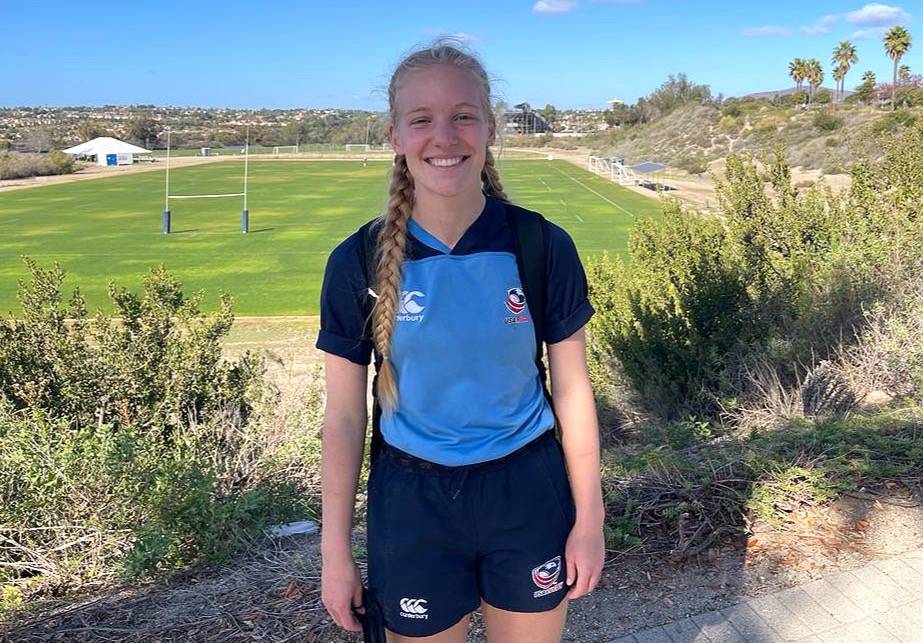 As USA U20 head coach Joel Bonnaud explained, more than half of the Winter 15s Camp attendees were completely new to the USA Pathway – a function of the pandemic. Katelyn Walker is one such newcomer, and also very new to the sport itself. Nonetheless, the Eagle High School (Idaho) senior traveled to the Chula Vista Olympic Training Site with the right mindset, took advantage of all the resources available, and grew in a way that impressed the U20 staff.

Walker tried a bunch of sports growing up, but soccer and basketball were the main pursuits. In early 2021, the then-junior saw an Instagram post promoting the high school rugby team.

“The team needed more players and no experience was necessary,” Walker recalled the promo. “So I went to a practice and really liked it. That was last February and I’ve just jumped in and really enjoyed every second of it. It combines all the other sports I’ve tried all into one, and I’m really happy with it.”

“The first game I played, I came in second half because they hadn’t really seen me yet and I was coming straight from basketball season,” Walker said. “I ended up having a lot of success in my first game, and so from then on I was able to start most of the games, and by the end of the season I was playing the entire game.”

Walker learned the game from center and then had her first exposure to high-stakes rugby in June. Eagle advanced to the Rugby Idaho 15s Championship but lost the title to Mountain View.

“Honestly, I kind of liked that it was a lot at once because I was able to learn by experience,” Walker said. “And I had a lot of fun learning that way. There are other ways to learn but just jumping in and experiencing it all at once, it was a really great way for me to learn the game – and I’m still learning.” 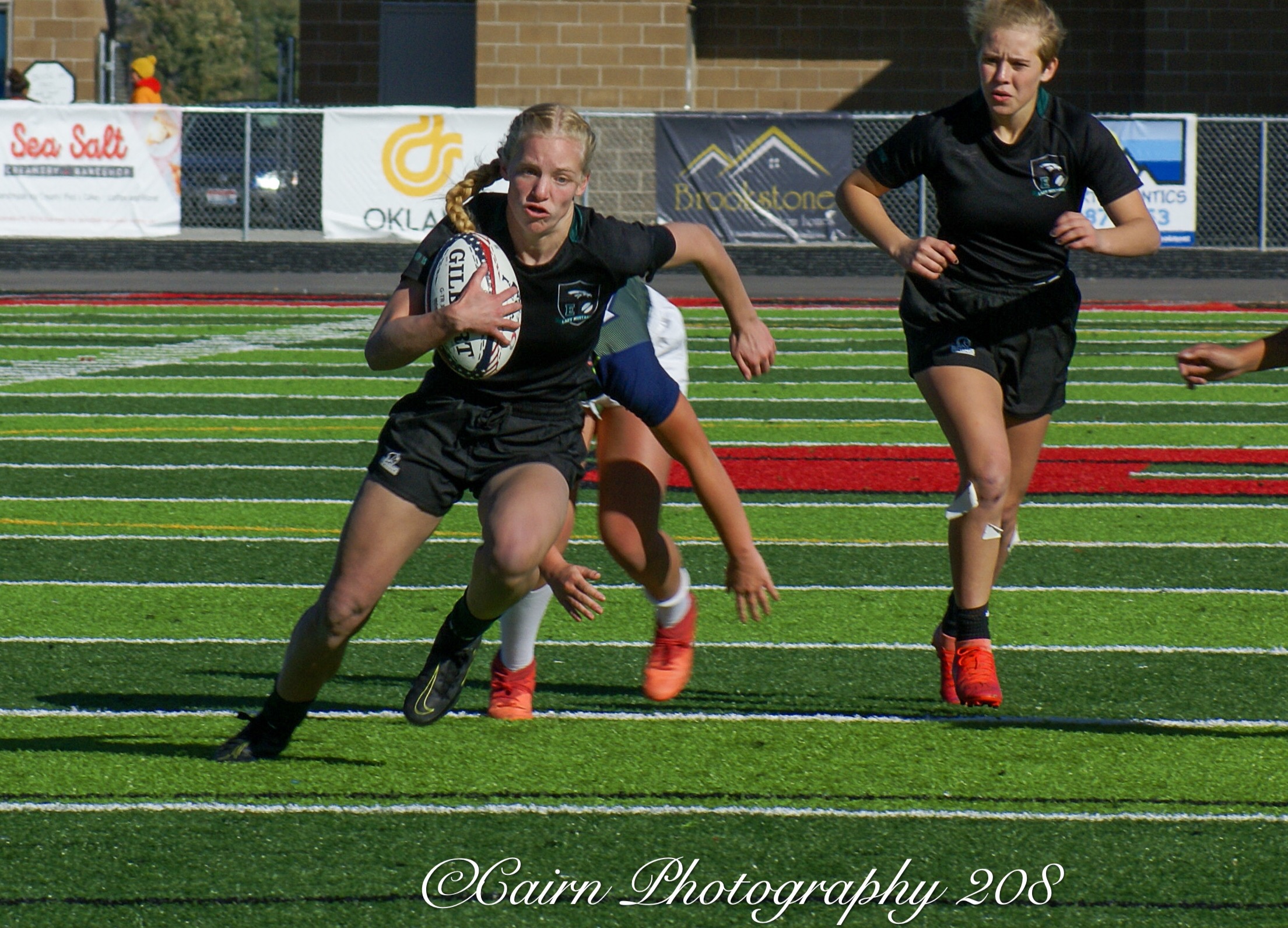 Summer brought on 7s, and Eagle stayed active in preparation for the West Ada School District season in the fall. In late July, the Mustangs entered a team in the North American Invitational (NAI) 7s tournament in Salt Lake City.

“They’re definitely different but it’s hard for me to say which I like better because when I’m playing them I just like whatever I’m doing,” Walker compared her affinity for 7s and 15s. “I like both, but 7s is definitely more fast-paced and more running and goes a lot quicker. But 15s is more strategic, more people and longer.”

The NAI 7s is a big high school showcase, and despite the hundreds of players on display, Walker stood out.

“That’s when I first started talking to a few colleges,” Walker said of recruitment. “I don’t know where I’m going to go to college yet but I’m really excited to find out and I’m really happy with the options I have as of now. Wait and see what plays out, but my goal is to definitely play as high a level as I can.”

Eagle trained hard during the summer and was in a good place when the West Ada 7s season kicked off in the fall. The Mustangs won the district championship 12-10 against Mountain View, and then took the top seed to the state playoffs, which intermixes the Boise teams.

“It was super exciting,” Walker said. “We lost one game in the regular season, and the team we lost to [Meridian] was the team we ended up playing in the state championship. So it was super nerve-racking and super awesome to play the one team we needed to overcome again.”

In preparation for states, Eagle worked on its mental fortitude, and that foresight paid off big time in the final.

“In the second minute of the game, one of our super great players got a red card [that was later appealed and reversed] and had to sit out the rest of the game,” Walker said. “We had to play 6-v-7 for almost the entire game, and we still came out on top with the win. It definitely took a lot more work, but it made the win all the more rewarding.”

Walker scored six tries in Eagle’s 38-26 win against Meridian, and as sweeper played an important role on defense.

“My goal was to just make sure I put everything out on the field and have no regrets in terms of effort,” she said. “I tried to take the pressure off by just focusing on what I could control, which was my work rate and trying my best and not giving up. It was definitely a team effort and that’s why we were successful.”

Eagle won the first 7s state championship and Walker was named MVP of the league. The senior thought her rugby had wrapped up for 2021, but winter break is the time for USA age grade assemblies.

“When I got e-mail to be invited to camp, I was super excited,” Walker said of the USA U20 Winter 15s Camp that occurred in Chula Vista, Calif., at the end of the year. “I was even a little surprised at how they found me, but really honored and so grateful for the opportunity.

“Going in, I knew I would of one of younger and less experienced players there,” she continued, “so my goal was to take in everything I could and just learn a ton. Just get better, however that is.”

Walker was one of four current high schoolers who, due to their age, were bumped up to the U20s (the U18s were also in camp), but more than half of the attendees were new to the USA Pathway.

“We had three big focuses and one of them was clockwork – which is like keeping your eyes up and looking around you – but practicing specific communication was not something I was used to,” Walker said of impactful lessons. “During the camp, I realized how useful that can be and how much of a difference it can make in a game if you’re just constantly talking to your teammates and just figuring out things before they happen.”

Walker also appreciated the extensive work around creating and exploiting 2-v-1s, another big focus for the assembly, and commended the whole group’s efforts to implement them in play. 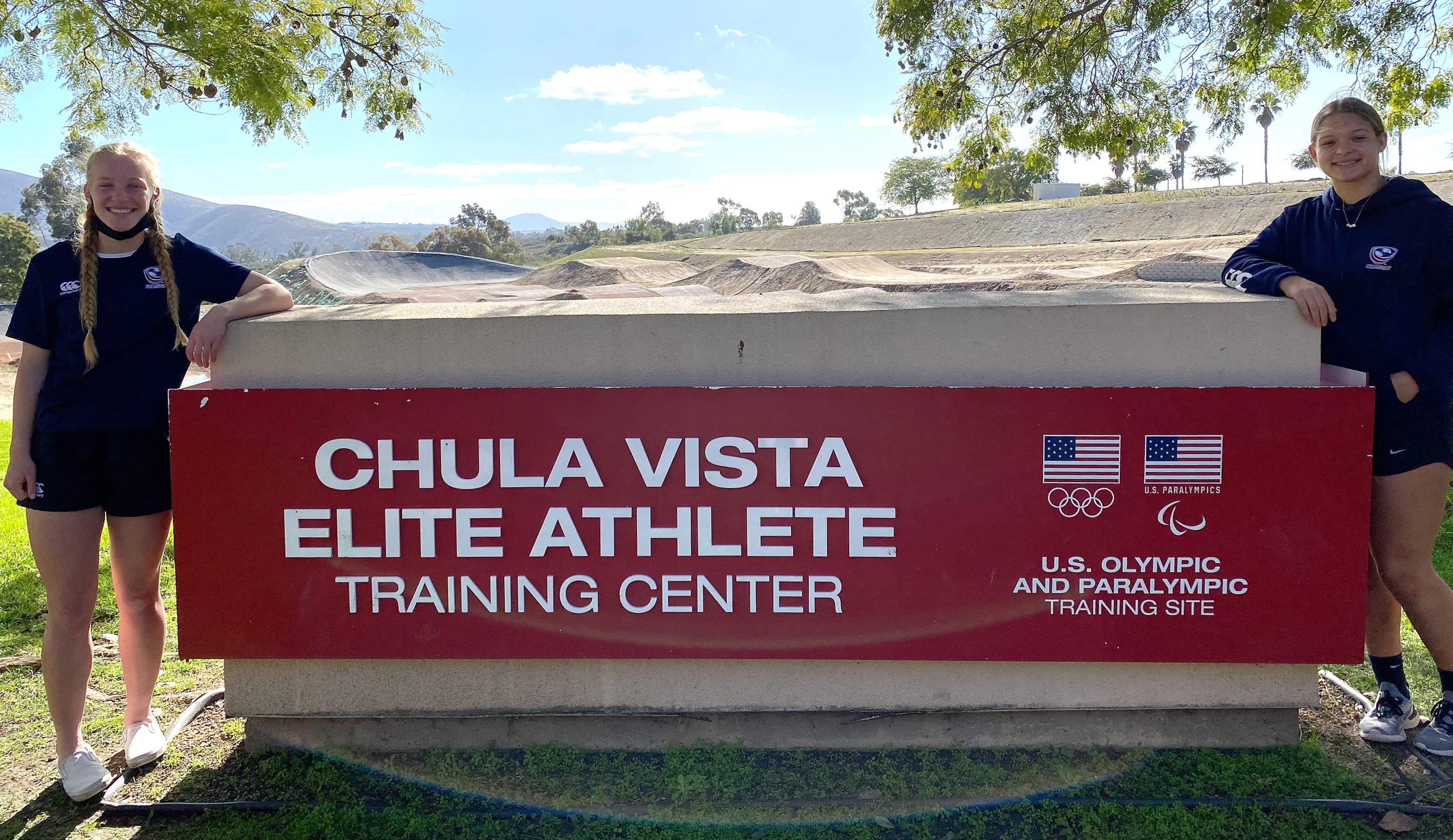 “I got to know a lot of girls really well and I was super lucky to have that,” Walker said of influential camp mates. “My roommate was PK Vincze from Harvard. She played the 10 position during the camp, and I played a center position, so we lined up together and were on the same practice and scrimmage teams. We g
ot to play a lot together and she was super helpful in communicating where to be and how I can improve. I was really grateful for that.”

Coach Bonnaud called out Walker as one of the players who displayed their growth in confidence through their actions, especially during the camp-ending scrimmage.

“The very last day during the scrimmage, when we were full speed and full contact, that’s when I realized it was really coming together and that it really did work,” Walker said of turning point for her. “Just doing it in a game-like situation made it click for me a lot more.”

All the players had a one-on-one meeting with either Bonnaud or assistant coaches Josie Ziluca and Farrah Douglas. Walker met with Bonnaud for feedback.

“We talked about my biggest takeaways from the camp … and I asked him what I could improve on and for his biggest piece of advice,” Walker said. “It was definitely just practice the things that we’ve worked on in camp, regardless of where I am, whether I’m with the USA team, my high school team or eventually my college team – just practicing the little things so they become more solid.”

Walker’s teammate, Reece Woods, was also in Chula Vista for the USA U18 camp, and they’ve shared their experiences with the Eagle coaching staff and teammates.

“The camp was so fun and I was able to meet so many cool people,” Walker said. “I’m so grateful for all the staff and the coaches and players, because I felt like there was no one I couldn’t connect with and feel comfortable with. It was better than I could have imagined because of the people and how everyone was dedicated and focused and wanted to be there. It made for a really great environment.”

Walker was recently invited to the Women’s Junior National Team Martlet 7s Camp, which occurs at the end of the January in Chula Vista. After that, its club 15s season in Idaho, and then some decisions about what the summer, and beyond, is going to look like in terms of rugby commitments.