The Midwest Rugby Union’s DI/DII hybrid league has drawn attention early in the 2021-22 season. The grouping relies on the recent history of strong DII clubs in the eastern conference; however, clubs have recovered from the impact of Covid-19 in myriad ways. Some need more time to rebuild numbers and momentum, while teams like the Pittsburgh Forge are ready to make moves.

The Forge is a relatively new entity in that it’s a merger of the Pittsburgh Angels and Pittsburgh Highlanders. The Forge joined the DII Midwest competition in fall 2018 and won its local competition that first year. It finished runner-up to Buffalo the subsequent year, and then the pandemic began.

That era saw a coaching turnover, and Todd Fabec took over in February 2021. Fabec grew up in Pittsburgh but then went West for college and played all his rugby in the Rio Grande. He then doubled back through the South and built up his coaching resume, spending time with Johnathan Atkeison at UNC Chapel Hill, among other teams. He returned to Pennsylvania 25 years after he left, and then some job flexibility allowed him to put his hand up for the Forge position. Fabec is also the head coach of the Midwest women’s senior Thunderbirds.

“Our Covid story is like everyone else’s, mostly,” Fabec referenced the turnover of players. “But we had a good core group of really wonderful people and built out from there as quickly as possible. But we didn’t know what was going to happen with our numbers. Would we have 35? Fifteen?

“I must give credit to our captain, Karina Sarver,” the coach said. “She has been a driving force in rebooting the club. With her and everyone in the leadership, we’re CIPPing well over 30 and hope to get [first and second sides] out. We have a full first side that has some depth but we need to create more.”

Fabec met with the leadership group to assess their goals for the team and the impending fall season, and then discussed those points with the larger team.

“They wanted to train well and train hard and go deep into playoff rugby,” Fabec said. “Not to say that was going to happen for sure, but it was a flag in the ground: Let’s go for this. And then everyone rallied around it.”

Forge was thus primed for a positive response to the hybrid league.

“When we heard about the hybrid schedule, the gut reaction from the leadership group was excitement,” Sarver said. “Division II is a great league. The schedule was awesome and the teams are really fun. But everyone would agree that it’s hard to develop your game playing the same handful of teams every year and with minimal surprises. To not see any variability until playoffs, we may not have realized it but that’s not conducive to growing with the game and all the other reasons why people stay in the game for so long. It’s fun to punch above your weight sometimes and reach for new goals.”

The new-league announcement occurred early enough that the team was able to put in good, hard months of training, and Sarver praised Fabec’s role in readying the team for bigger things to come. 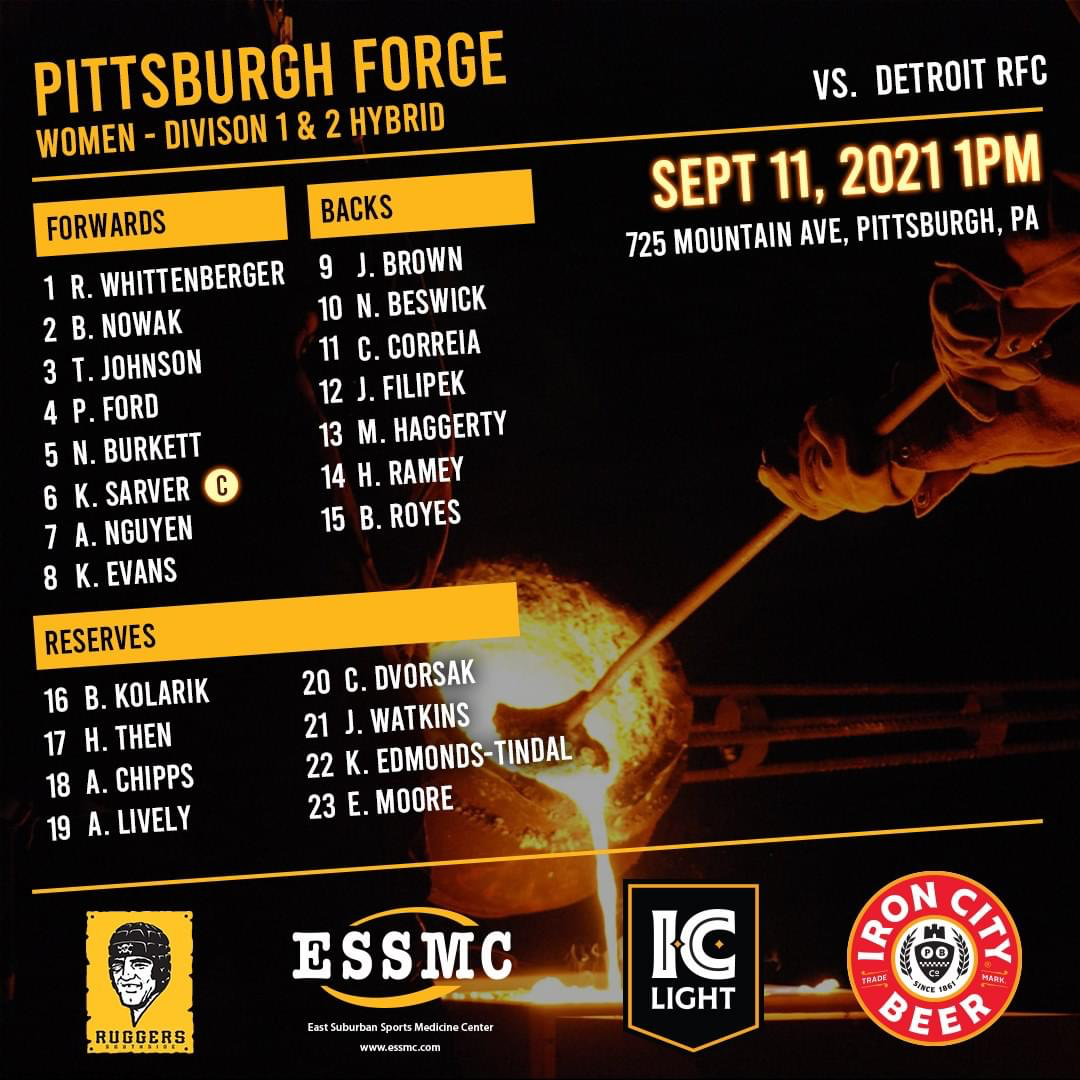 Pittsburgh’s season started with the lone DI team in the competition: Detroit. There’s history there – not with the Forge per se, but with the former Pittsburgh Angels who competed at won several DII national championships and now don Forge kit. During that era, Detroit was arguably the Angels’ biggest rival.

“That legacy is still there,” Fabec referenced the Angels. “But remember that the other team in the merger, the Highlanders, had never played at that level. So there was a natural concern about what a DI team was going to look like.”

The Forge hosted Detroit for the season-opener. The team was relatively new to each other, and the game marked Fabec’s second as head coach, but they were united with a clear game plan.

“We got off to a really good start because we were playing really conservatively,” Fabec said. “It was: Don’t play any games with territory. Get out of our own end, control territory early and gain some stability. And all of that happened. We were lucky to get people to do great things and got some points early.”

“Eightman Kaitlin Evans was Players’ Player and she had never played there before ever,” Sarver said of the traditional outside center. “She trained there at practice and started there for the game, and played out of her mind. She was super dynamic, was jumping in the lineout and just a hugely impactful player.”

Amy Nguyen was in a similar position, having never played flanker before, but moved into the position for strategic purposes.

“She was a rock star,” Sarver said. “She played out of her mind, too, and worked extremely hard making her tackles, seeing holes and running really well. Just excellent.”

Sarver’s counterpart, Holly Ramey, is backs’ captain and influences the game from wing.

“Our flyhalf, Nicole Beswick, has been playing rugby for a long time and she is excellent at visualizing the field and bringing the team with her,” Sarver said. “She can anticipate a play or two in advance and communicate what’s happening. Which is good, because she always has good ideas.”

Sarver called out inside center Jaime (“Boo”) Filipek as another influential veteran who brings, “this very cool, very calm, but very intense feel to the team,” Sarver said. “The team respects her very much.”

Fullback Brittany Royes isn’t new to rugby but is new to the Forge. Young and powerful, Royes scored a couple of tries, but also made important tackles and countered well off Detroit’s kicks.

Overall, Fabec was really impressed with how the team was able to maintain the shape of the attack and the defense through the majority of the game, especially considering how new the squad is to each other. Detroit did bounce back, as expected, and the teams produced equal points in the second half.

“They were dead keen to play,” Fabec said of Detroit. “I don’t want to overstate it, but Covid is tough. The climate of where the game is right now in the pandemic and managing it, it impacts how you train and travel. There’s all this documentation you have to do and tracking – it’s tough. But I thought Detroit looked good.”

The Forge had built a big enough lead in the first half to withstand Detroit’s surge, and the home side ended with a 54-21 win.

“I was really proud of everybody,” Sarver said. “Even when we had control of the game, everyone kept their heads really level the whole time. It was strictly business, execute our game, and finish this off and get the win. Absolutely ecstatic it worked out the way we hoped it would.

“Everyone was very focused and centered and elevating players around them,” the captain continued. “The super subs, when we made those choices, they did their best, too. There were some who played maybe 40 minutes in their whole life, others who were brand new, and we were so excited to get them minutes. We were hunting tries, operating as a pack. We’ve got a good thing going with chemistry on the team right now.”

The team celebrated Saturday night but then it was back to work. Film provided insight into next steps on the training pitch, and the Forge was ready to get after it.

“The league is definitely not settled at all,” Fabec acknowledged the competition with an eye toward the post-season options. “And fortunately the club knows that and how competitive the league is.”

Though this competition is a hybrid league, it differs from the ones that pervade the collegiate scene. It’s common to see colleges all play together during the regular season for the sake of logistics, but their different post-season pathways are predetermined by their division. Here, if a DII team wins the hybrid league, then it will advance to the DI playoffs. This systems feels apt for the Covid-19 era, as teams return and rebuild to their former selves.

“Ultimately you play rugby because you want to go as far as you can with it,” Fabec said. “When you go to nationals, there’s no guarantee you’ll win but you come back with a great experience. So if it happens that we go down the DI track, I don’t see anything but positives coming out of it. It will be challenging, of course.”

“The match was really fun and exciting and everyone did well, but we’re not letting that cloud what we’re trying to accomplish,” Sarver closed. “If you work hard and train really hard, then you play how you train. That win was a side effect of that.”