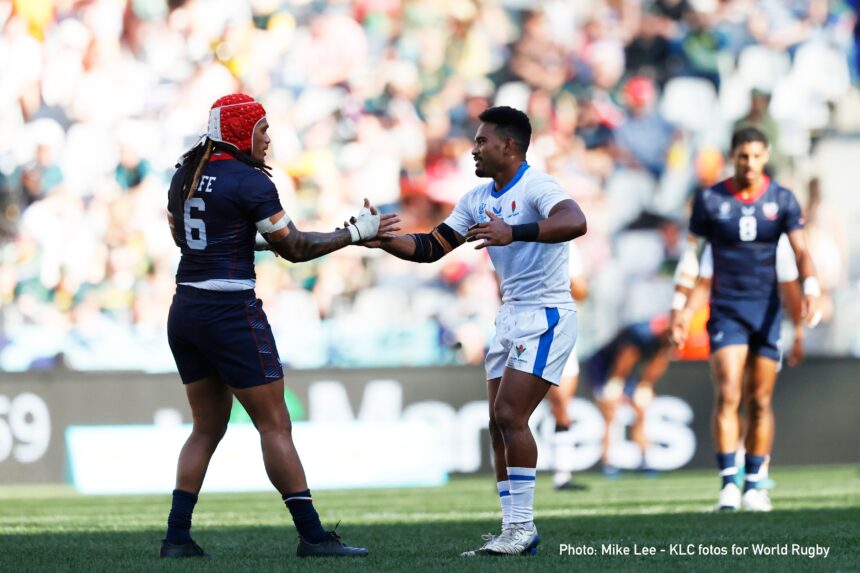 The USA Men’s 7s Team bowed out of Rugby World Cup Sevens contention, losing to Samoa 40-12 in the Round of 16. The Eagle men will now route to the Challenger bracket, where they’ll face Wales in the quarterfinals.

Samoa had to first advance through the play-in round, and did so with a 33-7 win against Uganda. Nearly six hours later, Samoa was back on the pitch for the Round of 16 and faced a fresh USA. Paul Scanlan and Melani Matavao scored on either side of Eagle David Still’s try, and Matavao’s two conversions put Samoa up 14-5 into the break.

Two minutes into the second half, USA captain Steve Tomasin scored and converted to pull his side to within two, 14-12. Samoa didn’t break under the pressure, playing a really fun, adventurous style of rugby that also capitalized on USA errors. Perry Baker came off the pitch with four minutes to go in the match. Scanlan, Vaa Apelu Maliko, Motu Opetai and Paul Eti Slater all scored tries – the final five-pointer coming well after the whistle as the USA was trying to put a positive end on the game.  resulting from a handling error. Matavao ended with five tries on the day for the 40-12 win.

“We came out here just to play the game, win and put Samoa on the map,” Samoa’s Levi Milford said, “and I guess that 40 points is a big statement and puts us on the map really well.”

“They’ve been really good all season long, in the top four or five teams in the world, and they showed that against us,” Tomasin said. “They were clinical when they had the ball in the second half.

“It is a pretty disappointing result, embarrassing as well,” the captain added. “We’ve been training well and had quite a bit of confidence coming into this game and we were right in it but in that second half. We lost a few kick-offs. In sevens, if you don’t have the ball it is hard to stay in the game.”

There’s been an emphasis on “playing for pride,” and USA Men will continue that pursuit on Saturday, Sept, 10, when they face Wales in the Challenger Quarterfinals at 6:15 a.m. ET. NBC and Peacock will be showing the games live.