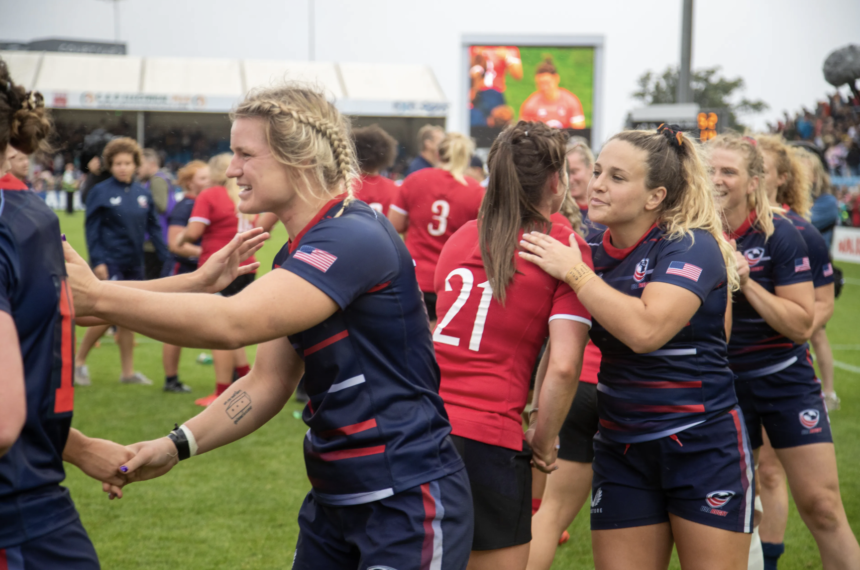 More than 10,000 spectators piled into Exeter’s Sandy Park to watch England host the USA Women’s XV National Team in Saturday’s Rugby World Cup pre-season match. The Red Roses established a 33-point lead by halftime, but the second half was much more even: 54-14 to England in the end. The Eagles end their U.K. tour 1-1.

The USA built confidence in its 21-17 win against Scotland, and then spent the week recovering and reloading in Exeter, home to six Eagles during the Allianz Premier 15s season. But England was always going to be a much tougher test, though it was not the thoroughly clinical side that faced the USA in November 2021.

England’s attacking lineouts, for example, devastated the USA last fall, but the Red Roses struggled with that set piece in the first half. On one occasion, the Eagles rebuffed five-straight driving mauls inside its 22, with the sixth attempt finally going over for a try. England’s punitive defense was great off the line and in the breakdown, but wasn’t immune to penalties inside its 22. At one point, England had 13 players on the pitch – a reflection of the pressure and flow that the USA was able to build during segments of the game.

But overall, England was able to control the game. Even when its lineouts or penalty count marred a perfect outing, the home side had enough weapons in the arsenal to secure a convincing win.

With the wind at England’s back, the USA was expecting a pumped-up kicking game from the hosts. There were some miscues early on – kicks that sailed straight-out, floated passes – but adjustments landed. Meanwhile, the Eagles had the back field covered, and when flyhalf Zoe Harrison sent a booming clearance down-field, Katana Howard, Alev Kelter and Lotte Clapp were all well positioned for the counter-attack.

Promise built as Lotte fought off Jess Breach in pursuit, until Ellie Kildunne stepped in and stripped the ball. A Natasha Hunt box kick put play on the USA 22, and although the Eagles had a chance to regroup with the lineout, an errant pass dribbled into the try zone. Howard had no choice but to dot it down. From the 5m scrum, England No. 8 Poppy Cleall hiked the ball to Hunt, who took the angle across the line, 5-0 after four minutes.

Breach was redeemed shortly afterward, as the wing was well positioned to intercept Gabby Cantorna’s pass and return it for a fast try. England captain Emily Scarratt kicked the first of five conversions for the 12-0 lead after nine minutes.

Hannah Botterman was a notable presence on defense, and as the first quarter neared its end, was involved in several turnover scenarios. A no-look pass from Harrison to Scarratt saw the center scamper to the USA’s red zone. An errant finishing pass and dire chase from Kelter and Clapp prevented the breakaway score.

The Red Roses attempted to drive five-straight lineouts across the line and credit to the USA defense for digging in and holding up two groundings. The USA kicks to touch weren’t able to make much ground, however, and that kept the game in the right area of the pitch for England. The pressure mounted, Hallie Taufoou incurred a yellow card, and England hooker Amy Cokayne was able to dot down the sixth lineout, 19-0 with Scarratt’s extras.

The teams broke for a water break, and when play resumed, England put away two relatively fast tries. Cleall, Cokayne and Breach connected on a breakaway. Kelter made the tackle and got in there for the poach, but England re-established control with a stolen lineout. The series ended with a Claudia MacDonald try in the corner, and Scarratt made the sideline conversion, 26-0.

The USA kept pushing, and a blocked kick and stolen lineout were fruits of that work. But another Cleall poach moved to Breach on the sideline for the try. With the extras, England led 33-0.

In the waning minutes of the half, the USA made its first foray into the England 22. Big, powerful carries from players like Kelter, Zackary and Hope Rogers fractured the defense and penalties followed. With the clock in the red, the USA missed an opportunity for three points in front of the posts, but entered the locker room with a bit of momentum.

The second half was much more even and opened with the Eagles threatening inside England’s five meter. Kelter put the team in position, taking a short line through the defense and then popping to the feet for a second go. Cleall gave up a penalty, allowing Cantorna to kick to the English 15 meter and set up a lineout. The goal line defense stood up and drove the USA backward, eventually ending with a turnover and a pretty fast return to Eagle territory. After a few phases thinning the defense, Scarratt sent a skip pass to MacDonald for the wing’s second try, 40-0 with the skipper’s conversion.

Minutes later, England was setting up its lineout for a walkover try. The USA did well to stop the initial shove, until Cokayne broke through the middle for the dot-down, 45-0, after 55 minutes.

A replay was in motion shortly afterward, as a low, controlled maul marched to the USA try line. Rosie Galligan dotted down but the try was recalled when TMO confirmed that the English lifters were in offsides positions when the jumper hit the ground. USA made good use of the turn of fortune. From the subsequent penalty kick to touch and lineout, Kelter, now at outside center, burst through the loose defense behind the set piece to relocate the game to England’s 22.

There the game remained, although England was able to withstand the Eagles’ battering rams at the line. The Roses had an opportunity to clear its lines, but Shaunagh Brown was called for blocking the on-rushing Georgie Perris-Redding, and the penalty set up a USA 5m lineout. Kelter slipped a tackle to get a meter within the line and then Rogers picked from the base to push through two defenders to score. Cantorna converted, 45-7.

England’s Brown was yellow-carded for a dangerous tackle, and the Eagles used a lineout to build some flow to the Roses’ 22. In attack mode, Kelter skipped a pass to Rogers, who quickly delivered it to wing Jennine Detiveaux in a bit of space. The defense came across for the tackle, but as Detiveaux was driven into touch at the 2m, the wing attempted the offload to Tess Feury in support. England reserve Helena Rowland instinctively reached for the pass, slapping it into touch. The action was deemed a deliberate knock-on, and given the location on the field, a tearful Rowland was red-carded and a penalty try awarded: 45-14.

England had 13 players on the pitch at this point, and to the Roses’ credit, the team was able to march down field and score again. The ball was brought back into the USA 22 before being kicked straight out, and so England resumed play with an attacking lineout in good territory. The Eagles were able to halt the driving maul, but when the ball moved away, Harrison sent a perfectly weighted grubber through the defense and Kildunne tracked it perfectly for the try. Harrison converted, 52-14 the final.

The second half ended 19-14 in England’s favor, and that is a competitive stat – or small victory, per captain Zackary in the post-game interview – that the USA can use in the final preparation for New Zealand.