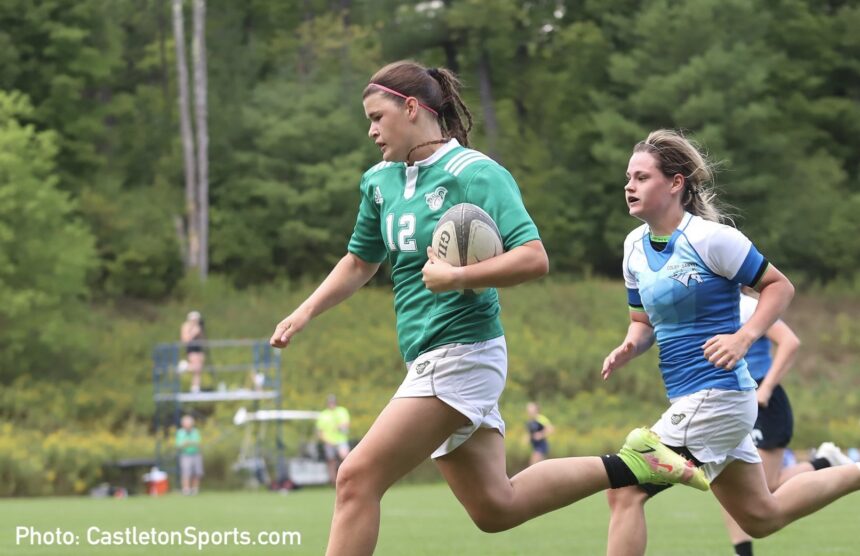 The National Intercollegiate Rugby Association (NIRA) opened up the 2022-23 season with a mix of 15s and 7s games, and with Division I being the most active in terms of 15s. There were a couple of cancellations as well, but week 2 will really see the season open up.

Three of the four DI games that were scheduled for Saturday occurred (Harvard vs. Long Island match was removed from the schedule), and all of the home teams won their season-openers.

2021 runner-up Army West Point (1-0) hosted Mount St. Mary’s University (0-1) for A and B-side games, and the Black Knights won by a combined 72-12. The Mountaineers led the A side game 7-5 after 10 minutes, but then a shutout ensued while Army scored another eight tries in 62-7 the final.

Army fullback Codi Butt led all point-scorers with 13 on two tries and a penalty, while freshman flyhalf Alissa Eisenhart finished with 12 on six conversions. No. 8 Julia Riekena dotted down two tries (see the No. 8’s intercept try below), while scrumhalf Gwynn Campos, wing Sydney Schaaf (who also kicked a conversion), flanker Kaylee Cargile and reserves Cecilia Ollis and McKhaye O’Boyle scored one try apiece. In the B side game, Army won 10-5. Freshman Kaylen Thomas scored Mount St. Mary’s try. In the B side game, Army won 10-5. Freshmen Keeley Davis and Katelyn Woenker accounted for the host’s two tries.

Quinnipiac (1-0) was also successful in its home-opener, hosting Brown (0-1) in Hamden, Conn. The Bobcats built a 32-0 lead into the second half, when the Bears then put down back-to-back tries from Nikki Lynch and Noelle Lewis. Freshman Julia Cunningham added the conversions for the 32-14 scoreline after 65 minutes. But Quinnipiac had the gas for another three tries to end with a 47-14 win.

It was a good day in Connecticut, as Sacred Heart (1-0) beat NIRA newcomer Princeton (0-1) 53-21 on Saturday. The Pioneers went up 31-0, as Fabiola Millien-Faustin, Makinzie Youngblood, Aly Cunningham and Jasmin Quinones scored tries, and Cunningham kicked all four conversions and a penalty. The Tigers then answered through Erica De San Jorge, and Alayshja Bable’s conversion put the visitors on the board before halftime. Millien-Faustin crossed again and with Cunningham’s extras, the Pioneers led 38-7 into the locker rooms.

The second half was more even, but Sacred Heart didn’t let up even as the Tigers surged. Sophia Villacorta and Amelia Clarke scored for Princeton and Bable added both conversions. The home side got another 10 points from Cunningham (try, penalty, conversion) and Emily Egan also scored in the bonus-point win.

In Division II, American International College (1-0) hosted New Haven (0-1) for its home opener and won 86-0. More details to come, but certainly not a bad start for the reigning DII champion. 2021 runner-up West Chester was also active, although it played two 7s games against visiting Alderson Broaddus. The Golden Rams won 32-0 and 22-0.

Two other sets of teams also played 7s series. Colby-Sawyer traveled to Castleton for three games, and after dropping the first two games 19-5 and 17-5, rallied for a 12-10 win in the third round. Castleton’s Hannah Coupas (lead photo) scored in all three games and led the team with 22 points on four tries and a conversion. Aubrey Tetlow added two tries, while Nat Simecek contributed nine points on a try and two conversions. Tovah Coe also dotted down for the Spartans.

The Chargers’ Tori MacLeod, Grace McLaughlin and Celina Dao scored tries, and Castleton’s Pamela McCullough swapped jerseys for the day and scored in the third match.

NIRA newcomer Newberry and a re-energized Guilford split their double-header. The Wolves won the opener 15-10, as Taqwai Seburn (2) and Vicky Noel scored for Newberry, and Wayne State College transfer Portia Star Jones and Savannah Marchinsky dotted down for the Quakers.

The Quakers, however, controlled the rematch and rolled to a 17-0 victory, as Sarah Pitts (2) and Jones scored tries and Caroline Wilkerson kicked a conversion.

New England and New England College were also supposed to play last weekend but their game was postponed.