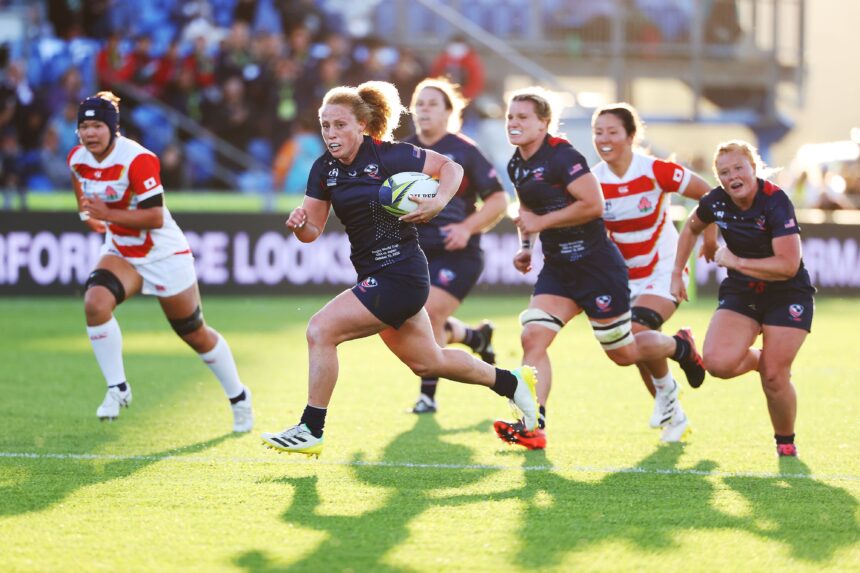 The USA Women’s National Team (WNT) won its first Rugby World Cup 2021 game with a 30-17 win against Japan in round two. The bonus-point win keeps the Eagles in contention for a quarterfinal berth, and spirits high for the Oct. 22 (ET) match against Canada. [Photo: Fiona Goodall – World Rugby/World Rugby via Getty Images]

It didn’t look good first half. Japan scored four minutes in, just dictating the flow of play. A line-break, a good kick-and-chase, and a cheeky blind-side play off the lineout put Megumi Abe into the corner, 5-0. Japan went on to dominate territory and possession, but for as creative and entertaining as the team was with ball in hand, the attack did not produce any other first-half points. Opportunities were missed. 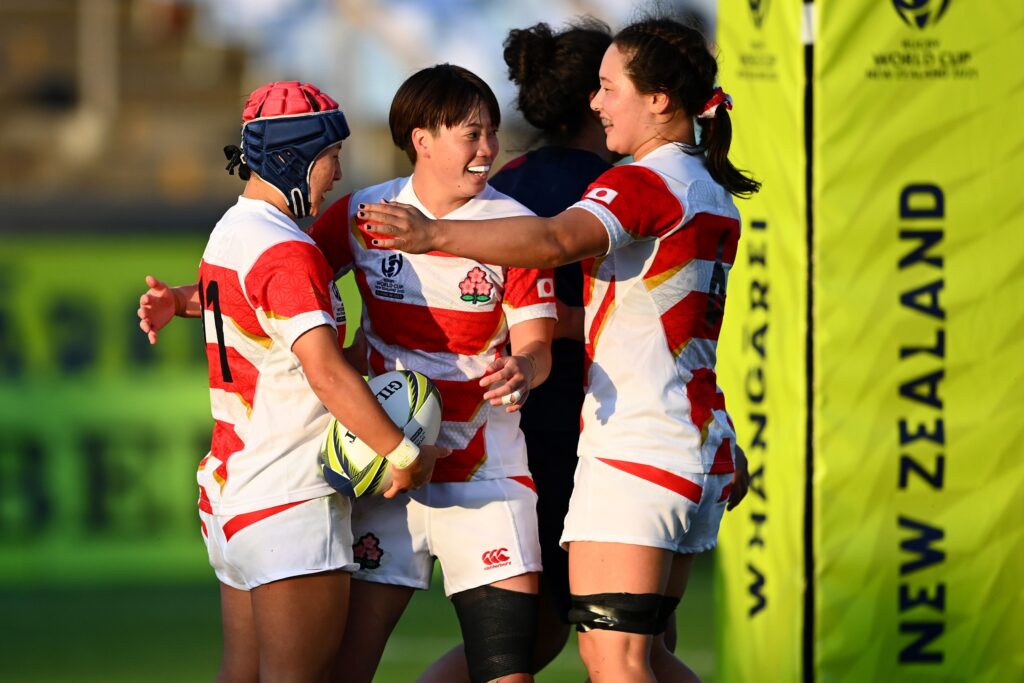 “[Japan] move the ball so well, they’re so brave. The way they want to play, I have so much respect for their ambition, their creativity and at the breakdown,” USA WNT head coach Rob Cain said. “They’re ferocious.”

Meanwhile, the USA struggled with discipline and handling errors. The penalty count was high, and Kathryn Johnson was yellow-carded for a deliberate knock. But the Eagles didn’t give up any points. In fact, the Eagles put a penalty kick on the board while down. Olivia Ortiz did well to scoop up a ball left on the sideline and when the ball worked back inside, it found Hope Rogers. The prop tore through the middle of the pitch, Gabby Cantorna booted the ball into the try zone, and Jennine Detiveaux was on the chase for the smother tackle.

The USA took a few opportunities at the line but then an opportunity for a penalty kick was too good for Cantorna to pass up: 5-3 after 22 minutes.

That was it in terms of first-half scoring but the momentum certainly belonged to Japan. Near the 30-minute mark, took one of many five-meter lineouts to the try line, and launched a series of pick-and-goes that eventually ended with a held-up try. It was a confusing strategy, especially as Japan is the smallest team in New Zealand and the backs were working.

In the final minutes of the half, a couple of wind-backed kicks put the USA in attacking position. A perfect lineout was pitched into Kelter’s hands and the center beat the first defender before being stood up at the line. The halftime whistle blew.

“Japan came to play and played exceptionally well in that first half, they just weren’t able to take the opportunities we gave them,” Cain said. “And credit to our players, they worked really hard to ensure we didn’t come in with a big deficit.”

The Eagles scored four minutes into the second half. A Cantorna chip kick and Detiveaux chase put the team on a tilt, and then a precise hands-out worked its way across the pitch. Center Eti Haungatau held the final defender and then timed the pass to Jojo Kitlinski on the wing. The hooker sprinted the 20-plus meters to the try zone for the lead-changing score, 8-5.

The game returned to the USA’s end, and kicking against the wind, the clearances weren’t making as much distance as desired. Japan counter-attacked with vigor, and when a penalty on the 10 meter evolved, the team went quickly, taking advantage of an overload out wide. Hinano Nagura handled the honors, 10-8 to Japan after 50 minutes. The Eagles’ response officially shifted the game. From the restart, Kathryn Johnson forced a penalty and turnover in Japan’s end. Cantorna sent a long kick, and a solid lineout and driving maul worked to the line. One pass off the ruck found Kelter, who bullied through three defenders for the score. The conversion was missed, but the Eagles were back in front: 13-10.

The reserves started rolling on at this point, and their energy was palpable. Defense repelled a Japan attack inside the 22 and the USA scrum forced penalties. The attack had new life, too. Detiveaux took a nice line through the defense and Kelter later followed with a defense-dragging run up the middle. Once at the 22, the sideline support was already running on when Cantorna sent a grubber ahead, and the ball bounced nicely into Bitsy Cairn’s hands. The reserve flanker scored on first touch. Kelter took over conversion duties and nailed a beauty from the sideline: 20-10 USA.

Japan was eroding, suffering from handling errors, fatigue, and ruing opportunities missed. The USA needed the bonus point, and it was in reach. With approximately 10 minutes to play, an attacking lineout when long to Rogers, who pushed off half of the opposition before going down. Waters peeled off the ruck and sent a behind-the-back pass to Detiveaux back inside. The wing, who did good work around the pitch all day, powered through the middle, beating three defenders to the try zone. Kelter converted for the 27-10 lead.

Japan had one more go, as a Cantorna clearance made it to the 50. Komachi Imakugi took the ball on the run and just sliced through everyone for the converted try, 27-17.

The try-scorer was yellow-carded shortly afterward, attempting to defend a Kate Zackary attack but batting down the ball instead. Kelter opted for the sideline kick and nailed it: 30-17 the final.

Next up: Canada, which has Italy tomorrow.