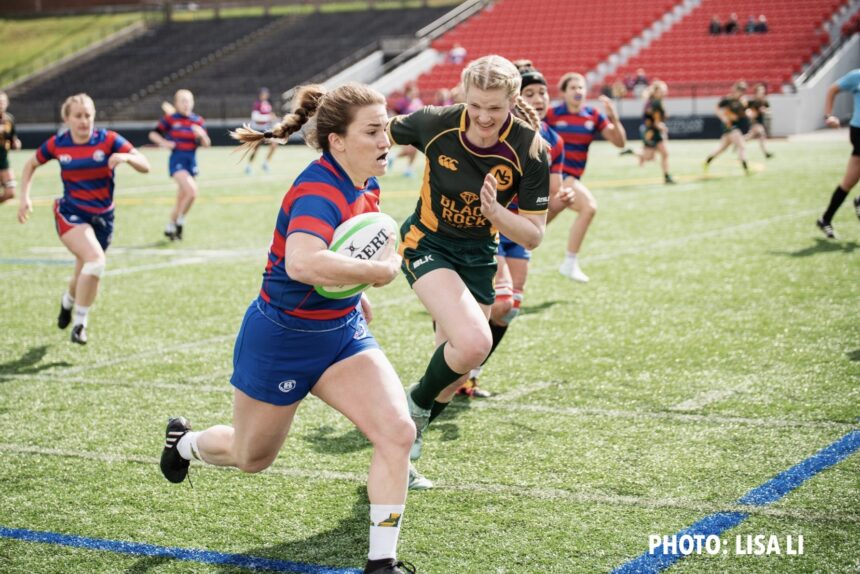 USA RUGBY – Week 5 is the midway point of the Women’s Premier League (WPL), and that is the case for the Red Conference, which has contested all of its matches as scheduled. The Blue Conference has experienced some forfeits and postponements, which hopefully those gaps in play will even out in the second half of the season.

The Red Conference saw two tight games evolve on the weekend. It was a lead-changing affair between San Diego (2-2) Twin Cities (0-4), and the hometown Surfers were able to hold onto a 23-22 win.

“They had a bit of a setback last week with the Colorado game, so this week was important for us just to get the team morale back up,” San Diego head coach Jarrod Faul said of the previous loss in Denver. “But even though we had that tough loss, the energy was good at training all week and it was really good for us to come away with a win [Sunday].”

Twin Cities was in a similar situation, having lost a single-digit decision to ORSU at home, and head coach Rebecca Radtke was pleased with the team’s rebound in SoCal.

“We did a better job this game of pushing pace,” Radtke noted positives. “We did a different nine [Lynn Kleyer] to help push the pace and moved our other nine [Amity Beiner] out to wing to get some speed on the outside.

“We were more consistent on intensity when it came to defense,” the coach added. “Our launch was better defensively. Our shift wasn’t so great, our up and out. Either we were shifting out without the up, or we were going up without the out.”

Kleyer opened the scoring three minutes in, and then San Diego answered through wing Amy Verdonik (5-5). The visitors then took a 10-5 lead when flanker Brooke Doerscher scored at 24 minutes.

“Our seven has had a remarkable season,” Radtke said of Doerscher, one of nine WPL rookies on the pitch Sunday. “A phenomenal game against San Diego, just fast off the scrum, and consistently kept up the intensity and speed all day. Brooke was our forward MVP today and even picked off a pass off the scrum for a try, which was beautiful.”

“First half we didn’t control possession really well and they put us under a lot of pressure and we ended up forcing passes we shouldn’t have been making,” Faul said. “Second half we spoke about that and tidied things up and played with a bit more patience.”

“Second half was about not trying to do too much, just getting go-forward and building phases and ultimately just controlling the ball,” Faul said. “The last 10 minutes, they pulled back to get within one point of us, and really tested our character there. We were fortunate to pull through.”

San Diego held on for the win, while Twin Cities gets two bonus points in the close loss.

“Last week [against ORSU] was disappointing because it was a lack of intensity on our home field,” Radtke said. “They don’t hate losing enough. … But that will develop. The more they start believing in their ability to play at this level, I think that’s where that will come from, and this weekend helped with that – to travel and understand that they were in it the entire game.”

Both San Diego and Twin Cities are very young this season, as are many teams that are promoting from their ranks and blooding new WPL players. Faul called out newcomers like Kaylee Westmoreland and Megan Lloyd. Radtke liked the work from lock Tara Viken, especially in the home stretch, and hard-working Kleyer at nine.

“It’s just getting better every game,” Radtke said of the season goals. “Even if I get five more minutes of intensity each game, we build from 40 to 45 to 50, and come nationals they should be at 80 minutes of pure intensity.”

There was a lot of anticipation for the Colorado Gray Wolves (3-1) and New York (4-0) match, as the teams were undefeated heading into Saturday. Rainy weather made the playing conditions on Randall’s Island difficult, especially for two teams that like to play with a lot of width and speed.

“There’s always two ways you can approach a game like this: You can either try to play with emotion or you can try to play with your head,” New York head coach Ryszard Chadwick said of the opponent and pressure. “How do we win the game before we play the game? So having the right game plan in place and the right personnel to execute it were really important. We chose to play with the head versus the heart.”

It took approximately 30 minutes, but New York opened up the scoring through flanker Gio Cruz and followed with inside center Matilda Kocaj before the break. Allysa O’Neill’s conversion gave the home team a 12-0 halftime lead.

“It wasn’t necessarily that one team was better than the other,” Chadwick said. “When we got into their 22, which was maybe 3-4 occasions, we were able to leave with some points. When they were in our 22, maybe 2-3 times, our defense was really solid and they weren’t able to leave with points. Most of the game was played between the 22s, and there were a lot of scrums.”

Chadwick praised the work of the front row against a very strong Colorado scrum, and the back row of Cruz, Adriana Castillo and Misha Green were really effective in open play. O’Neill added a penalty in the final 10 minutes for the 15-0 win.

“Fifteen-nil is a low score line when you look at the rest of the fixtures for both teams, but both teams wouldn’t give each other anything, so it was a really good battle for the full 80 minutes,” Chadwick said. “I have to give credit to Colorado for how they played. Randall’s Island is not a nice play to visit, especially in the weather, and they definitely challenged us in so many areas.

“We know we’re still building and growing, and just because we won four games in a row doesn’t mean we can’t lose four games in the row,” Chadwick looked toward the second half of the season. “It’s one game at a time.”

A few hours north, the Blue Conference held a single game between Beantown (2-2) and Chicago North Shore (1-3), which was playing in its first official game of the season (the Week 1 trip to NorCal was technically a forfeit, though a game was played). Beantown won 64-5.

Genevieve Quirion, Emily Henrich, Amanda Schweitzer, Yeja Dunn and Claire Stingley scored in the first half, and flyhalf Rachael Harkavy kicked the first of two conversions to put the home side up 27-0 into the break. Stingley, Schweitzer, Quirion, Harkavy (2), Nicole McCardle and Claire Collins added second-half scores for the 64 points. And Chicago North Shore scored through fullback Emma Farnan in the 73rd minute.

“It was incredible to see things we practiced on attack during the week get utilized in the match and have a major impact,” Beantown head coach Chris Mutty noted. “We’re looking forward to a couple of big rematches!”

Beantown sits in third place in the Blue Conference, but both of its losses have been single-digit decisions to Berkeley and Life West. Beantown enters a bye week this round and then restarts with Life West on May 21 at home.