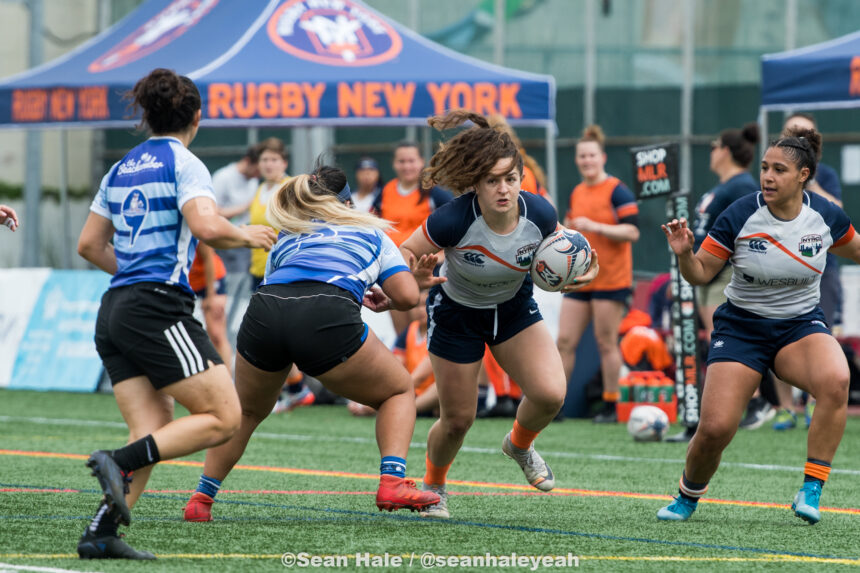 USA RUGBY – The Women’s Premier League (WPL) is in the back half of the 2022 season, meaning teams are seeing each other for the second time this spring and gauging progress after more than a month of play. Three games took place, and New York, Colorado Gray Wolves and Life West all banked wins. [Note: TRB produces the weekly WPL recaps]

The most competitive game of the weekend occurred as part of New York City’s first Major League Rugby (MLR), WPL double-header. On Sunday, undefeated New York Rugby Club (NYRC) and San Diego reported to JFK Stadium for the teams’ fifth match of the season, and then the MLR’s Rugby United New York (RUNY) and Seattle followed. The day produced a double win for the home teams: 34-19 to the NYRC and 30-22 to RUNY.

“It was an incredible occasion with the MLR curtain-raiser,” New York head coach Ryszard Chadwick said. “New York fans came out in the hundreds, so that was pretty cool.

“We started really well,” the coach continued. “The first 2-3 minutes, I thought, ‘O.K., here we go, we’re looking good here.’ And then we fell off completely and San Diego came hard at us. We gave away a few penalties, they kicked for the corners. San Diego gave us some real problems. … For the first 30-35 minutes, we played like 15 individuals versus one team.”

San Diego only traveled with 15 players, and as captain Teigan MacDonald explained, the team focused on nailing fundamentals, playing with intensity and staying connected.

“We shifted our attacking structure, looking for more inside lines as opposed to the Surfers’ traditional wide-to-wide attacking. That really helped us,” MacDonald said of team strengths. “And always pushing the momentum. Anytime we get past that gainline, we’re playing quickly and trying to get the ball out as quickly as possible.”

San Diego scored 19 points in the first half, as prop Kimdinh Tran, No. 8 and vice captain Julia Buescher, and flyhalf Hunter Griendling scored the tries. MacDonald called out Tran, who is from New York, for a powerful performance; the adaptability of Lauren Thunen, who is normally a back but played in the forwards; and Srob Oberman-Breindel, who has played for NYRC, for keeping the pace at a premium. 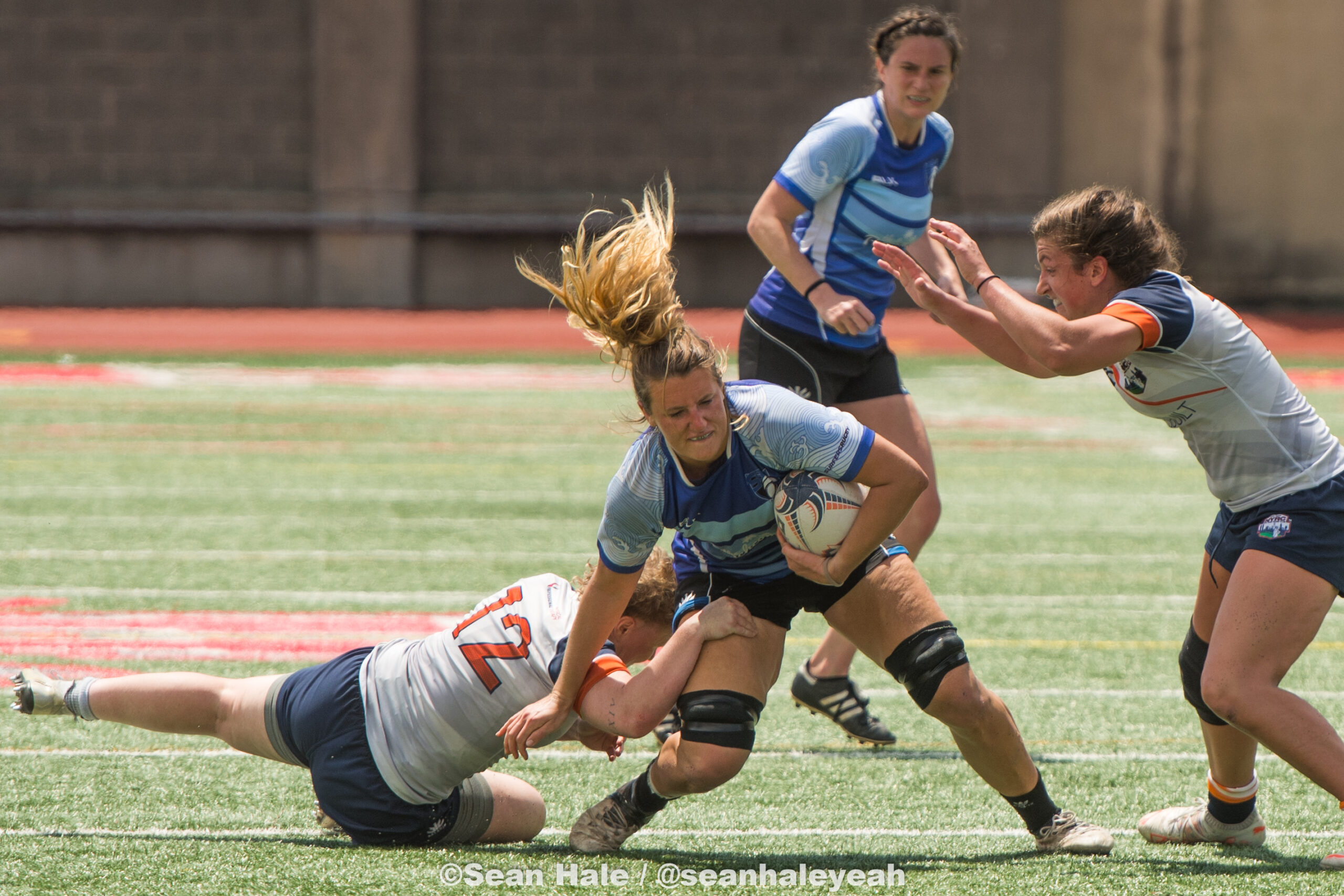 “There were a few messages that I had sent onto the field that either weren’t being passed on or weren’t being listened to. They had a bit of a telling-off at halftime because of it,” Chadwick said of the midway regroup. “And I don’t know if it was the occasion? They had to organize everything for the MLR game or whatnot, so maybe there was some organizational stress attached to them in the early stages of the game. But once they got the wake-up call, they bounced back and listened to the messages and the stuff we’ve been working on all season.”

New York had changed its defense to account for Griendling, but the plan as a whole wasn’t working until the second half. Better defense led to more ball in hand and comfort on attack, and that forced feel of the first half morphed into a more natural team game in the second. New York worked its bench and started chipping away at the 19-8 halftime deficit.

The home side gots its first-half points from an Allysa O’Neill penalty and Matilda Kocaj try. New York then touched down four-straight tries through Sarah Minahan, Adriana Castillo, Misha Green and Denisse Zambon Regalado, and O’Neill kicked three conversions for the 34-19 comeback win.

“We were still doing things right and working incredibly hard,” MacDonald said of the second half. “It’s just so difficult to ask 15 players to do a full 80 and keep that momentum we had in the first half.

“I’m incredibly proud of the group we brought,” the captain continued. “We’re going to take that momentum into future games knowing that we can do it with 15, so we can do it really well with a few extra subs.”

“For me, this is the atmosphere you’re going to experience at nationals,” Chadwick said of takeaways. “How can they cope with the setting? The crowd? The pressure? So it was a useful experience for us looking toward nationals – not that I’m necessarily thinking that far ahead. But as a learning curve, it’s something we can look back on and say: This is how we performed in a similar setting, how do we fix this?”

New York heads to Twin Cities this weekend, while San Diego will travel (with subs) to ORSU.

On the other side of the Red Conference, Oregon Rugby Sports Union (ORSU) traveled to the Colorado Gray Wolves, and like San Diego, the Jesters rostered 15 players for the road trip. In the teams’ first meeting, and season openers, the Gray Wolves won a tough 34-17 contest in Oregon. On Saturday, the home side won 71-0.

Ehrecke opened up the second-half scoring, and then front row reserve Madison Williams followed with five points. Wings Sullivan (2) and Beatriz Amaral finished off three more tries before full-time, and Tennant’s three conversions capped the bonus-point win. The Gray Wolves enter a bye week this upcoming round, while ORSU hosts the Surfers in West Linn.

The Blue Conference had one originally scheduled game come off, as Atlanta rescheduled its match with Berkeley to June 11. That weekend will be a double-header for the Harlequins, which will also play Life West on June 12. Meanwhile, when Berkeley retakes the pitch this weekend, it will have been three weeks since its last game (April 30).

Life West took a full roster to Chicago North Shore, which was playing in its first home game of the WPL season. Both teams have a mix of WPL newcomers and veterans, but the teams are in different growth stages, and that showed itself in Life West’s 107-0 win. The Gladiatrix head out to Beantown this weekend in a week-one rematch that went 17-10 to the Californians, and North Shore hosts Berkeley.


Woodlands Wins Texas by One Point