When Arturo Bravo Nuevo joined Boston in the fall, he did not inherit a struggling team that needed a makeover. Boston has spent recent years climbing to the top of the Northeast’s DI, but has run into a Beantown-shaped road block this previous year. Bravo Nuevo, who hails from Spain but has coached and played in New Zealand and Australia, was brought in for refinement.

“I’m used to coaching teams that are in trouble before I arrive and helping them turn things around,” Bravo Nuevo said. “But that was not the issue with Boston. They were playing good rugby. Their problem was they were a little bit tense. They were so competitive that they were forgetting to have fun and enjoy each other’s company, so I did a lot of work on the positivity of the team.”

When players are less rigid, then they experiment outside of their structures. Team spirit breeds confidence and trust, and that’s where the coach focused his energies in the fall. He also zoned in on scrums, which were functioning well but needed improvement, and defense and tackling during the league season.

Italia Iercia, Gwennyth Davidoff and Denise Lyn-Shue helped drive an improved scrum that played a big role in Boston’s league-opener, but Beantown ultimately triumphed 24-21. The rematch occurred a month-and-a-half later, and although it was a good game, Beantown was well prepared and triumphed 31-14. Boston ended 2015 with a 5-2 record, and short of its goals. 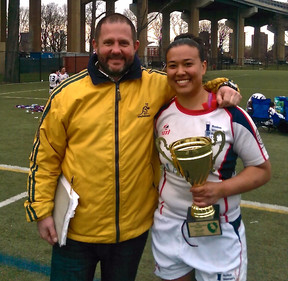 “It’s our anxiety level,” Bravo Nuevo reflected on the second Beantown game. “We have the ability to beat Beantown, but there’s too much thinking and not enough relaxed play. The players, they show up two hours before the game – it’s too early. Your adrenaline peaks too early. We shoot ourselves in the foot.”

The coach has continued to work with the team’s mental game and has also used the previous two months of indoor training to hone the attack, up fitness and reinforce ball-handling skills.

“A big part of my work this spring is putting them in uncomfortable situations,” Bravo Nuevo said. “They’re used to playing teams and beating them easily – except Beantown. When they play a more challenging team, it takes them off the rails. So I’m putting them in situations where things aren’t going their way, but they have to stick together, stay calm, and focus on their work. You’ve got to take control, score first, set the pace.”

Boston received its first reward of 2016 last weekend, winning the Four Leaf 15s in New York City. The team scored 199 unanswered points across five games, although Bravo Nuevo regarded the stats as a reflection of more off-season work. Although the competition wasn’t on par with league play, the tournament did allow the players to work on its decision-making.

“We’ve been working on general knowledge,” the coach said. “That was something that was missing in the fall – knowing what to do and when in each part of the field, and who’s going to do it and why.”

Bravo Nuevo relies on the solid leadership of the Roberts twins. Morgan is a No. 8, Tara a flanker, and they’re both very important to the team’s success.

“I’ve coached a lot of players in a lot of countries,” Bravo Nuevo said. “They’re top-five picks for me.”

Morgan has been playing with the Northeast Academy, along with teammates Deanna Nash, a very fast fullback with good field vision and decision-making, and Miranda Wakimoto, who is a difference-maker.

More challenging games against Albany and New York should help Boston test its progress. The goal is a win on May 7 against Beantown, which begets a ticket to the DI Round of 8. Along the way, skills will be refined, mental toughness reinforced, and team spirit rebuilt.