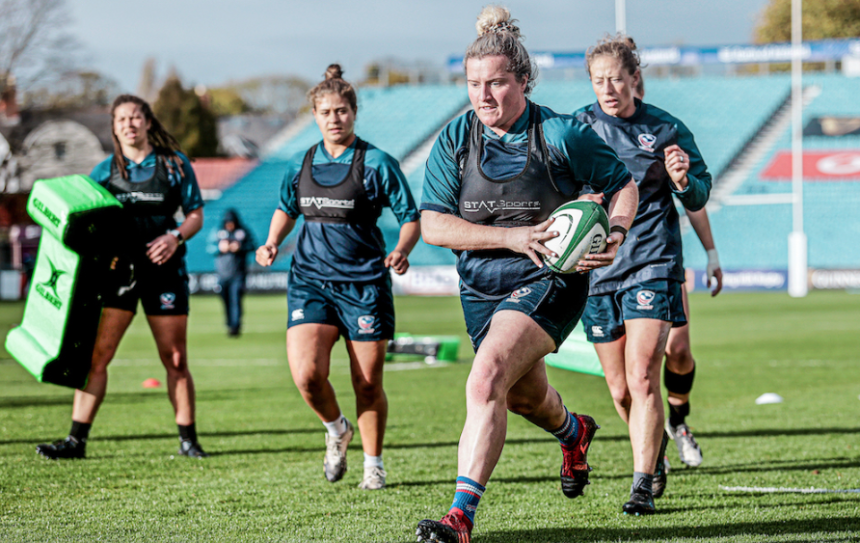 GLENDALE, CO (May 2, 2022) – USA Women’s National Team XVs Head Coach Rob Cain has officially named 42 players to the Rugby World Cup player pool for New Zealand this coming fall. From these 42 players, rosters will be selected for the Pacific Four Series 2022, a Rugby World Cup preseason assembly, and a UK preparatory tour ahead of a finalized traveling roster for the Rugby World Cup in October.

Consisting of players evaluated over the last few years through daily training assemblies, Stars vs Stripes intrasquad matches, USA Falcons exhibitions, internationals and individual club play, Cain and staff are excited for the players listed here as they continue to finalize the group in the lead up to New Zealand.

“First and foremost, congratulations to the players named here today. This signifies such a huge milestone and is a huge cause for individual celebration. We don’t often talk about the story of the individual, but it’s great that this announcement can be added to their story today.

I also want to thank the hard working and dedicated players that aren’t listed here today, the individuals that won’t have that celebration moment. Thank you for all of your efforts, determination and support of others. You have all played a part in this group’s story and I offer my sincerest thank you.

Rugby World Cup preparation is a very involved process and I want to thank the rugby community for their collaboration and support. The Women’s Premier League, Allianz Premier 15s, club and universities have all played fundamental roles in bringing this group together, our sincerest appreciation goes out to those groups and the rugby fan base for their ongoing support.

We are very excited with the group named today. We’re excited at the proposition of this group preparing and playing five test matches alongside a Rugby World Cup preseason together. We’re excited for the ever increasingly difficult selection meetings and excited for the players to continue to show not just their pride and passion for the USA jersey, but also their technical, tactical and mental ability when it matters. Ultimately, we’re excited at the possibilities that lay both in the lead up and at the Rugby World Cup itself. Excited for the chapters that are left to be written by this group.” 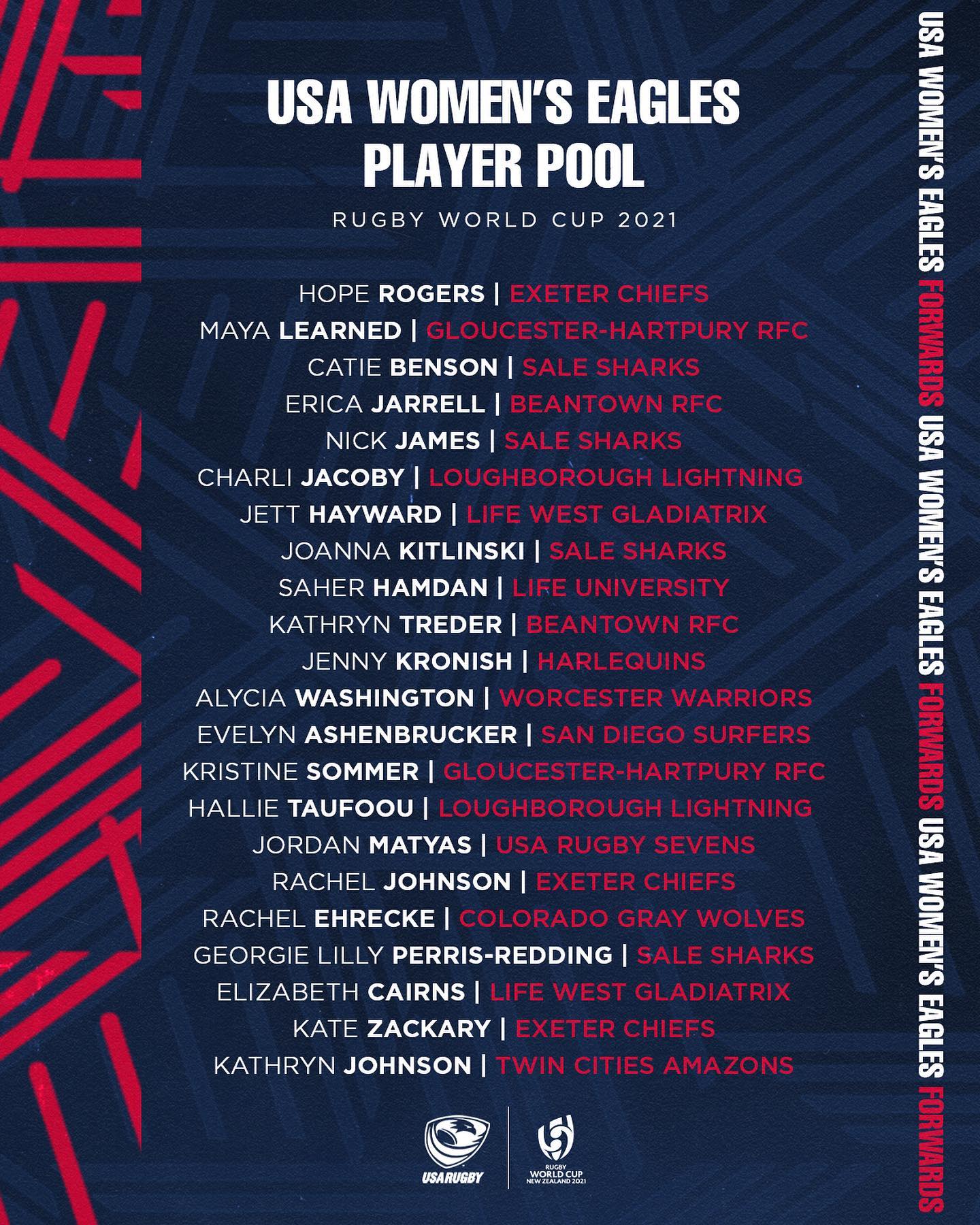 Cain brings a young and exciting collective of players to the forefront, with 32 of the 42 players vying for their first Rugby World Cup selection. This congregation of young and veteran experience will now put their hands up for selection to a string of upcoming competition and training assemblies. From this group, rosters will be named for the Pacific Four Series 2022, also taking place in New Zealand this June and a planned tour of the UK for preparatory fixtures ahead of the Rugby World Cup. The UK matches have yet to be confirmed. Between the two competition windows will additionally be a three-week Rugby World Cup preseason camp with the full player pool. 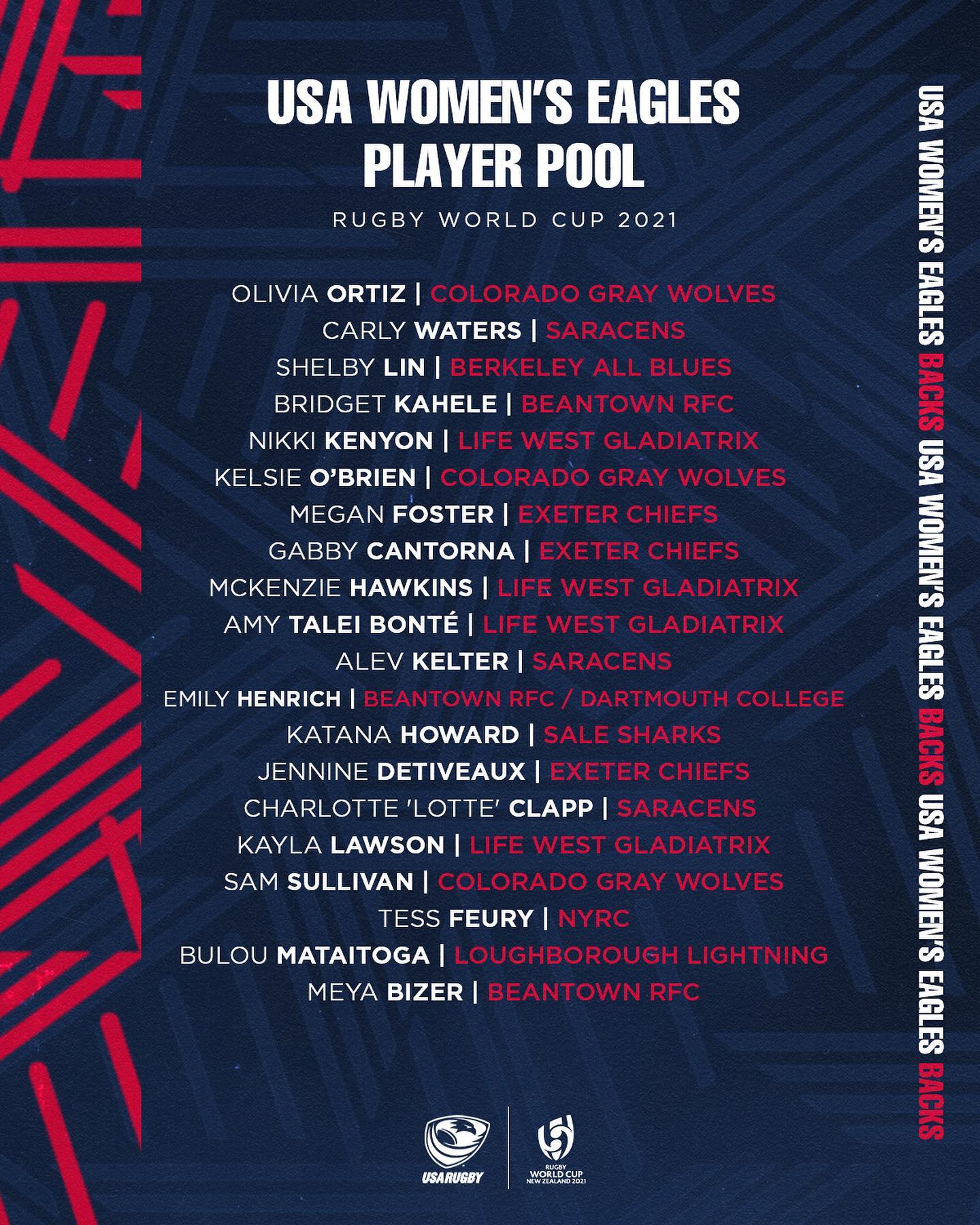 *Have been selected to a previous Rugby World Cup in fifteens

Next steps for Cain and his staff will be to select a traveling roster for the Pacific Four Series in June as four of the world’s top teams go head-to-head in New Zealand. The pre–Rugby World Cup tournament will be contested by New Zealand, Australia, Canada and the United States, where the cross-regional, annual international competition acts as one of the principal qualification routes for the top tier of WXV in 2023. The United States first faces Canada on June 5, 2022 at 8:15 PM ET with live-stream details to be confirmed by World Rugby.