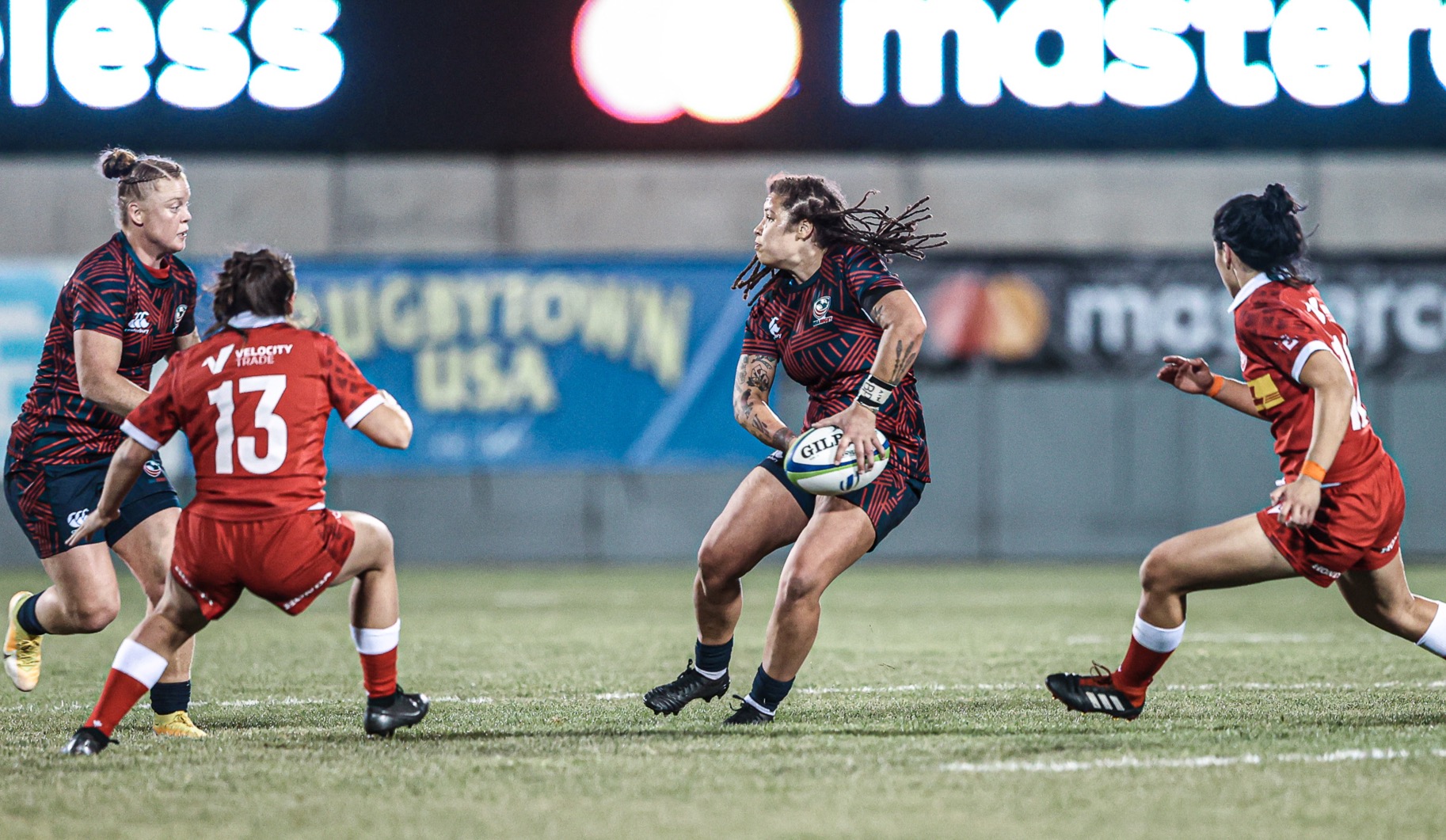 Despite an early lead, the USA Women’s National Team dropped its second test against Canada 26-13 on Friday night inside Infinity Park (Glendale, Colo.) The Canadians outscored the Americans 41-22 across the two Pacific Four matches to claim the title. The Eagles will now head to Europe for the second half of tour and play Ireland (Nov. 12) and England (Nov. 21).

The game started with a flurry of activity as three tries were scored in eight minutes. And the Americans went up first. The Canadians kicked off and fullback McKenzie Hawkins returned a strong kick that Canada fullback Julia Schell did not field well. Kate Zackary was on the hunt and her pressure meant Emily Belchos’ hurried kick didn’t gain much advantage. Wing Ilona Maher took the ball up field and then a clever kick from center Katana Howard got Canada scrambling. An offsides penalty allowed flyhalf Gabby Cantorna to kick to Canada’s five meter, and Saher Hamdan’s lineout throw hit jumper Kristine Sommer right at the top. Zackary took the ball on an angle that caught the defense off-guard – perhaps Canada was expecting a driving maul – and that indecision gave the captain just enough space to power through two defenders for the try. Cantorna connected on the extras for the 7-0 lead.

Unfortunately for the U.S., Zackary’s score in the second minute would be the team’s only try of the night. Overall, the Americans’ ball movement was better than Monday and there was some opportunity to get a feel for a sideline-to-sideline attack. One passage of play stands out, when the Eagles tapped through a penalty near Canada’s 22, and everyone got phase play going. There were quick hands and running on, and wing Bulou Mataitoga, who does so much with so little, should have scored if it wasn’t for an unfortunate mishandling a meter from the line. Generally, though, Canada attacked from depth and had more options against a fast-up defense.

Canada did a good job of frustrating the Americans. They stole lineouts and drove back scrums, and would have been even more damaging if the starting and replacement tighthead props weren’t pinged multiple times for driving. Canada did struggle with penalties, especially in the breakdown and when the pressure was on in their 22. The visitors had to play the final 18 minutes with 14 players, but Canada not only withstood an eager U.S. but added a converted try.

After Zackary’s opening try, Canada answered with back-to-back scores. A driving maul off the lineout and then picks at the line put No. 8 Sophie De Goode over the line. Monday’s MVP added the conversion for the tie. Minutes later, nicely timed passes and good support lines between the forwards allowed Courtney Holtkamp to break free. Hawkins had the line for the tackle, but Holtkamp pushed off outstretched arms for the try, 12-7. It was good running rugby.

There the scoreboard until 28 minutes in, when Canada failed to roll away as in the breakdown. The penalty was close to the 22 and in Cantorna’s range for the three points: 12-10 to Canada. But just as the U.S. was feeling good, a miscommunication saw the restart bounce out of bounds at the 22. The Eagles got the lineout but Canada stole the throw-in cleanly. De Goode went right through a ruck, and although Maher put in a great pursuit tackle, it was only a matter of pick-and-goes before prop Alex Ellis was across. The No. 8’s conversion gave Canada a 19-10 lead.

Some frustration started to show and culminated with a Bitsy Cairns yellow card for diving in the ruck inside the USA 22. The Eagles were able to end the half with no points against, but the seven minutes needed to elapse in the second half before the home side was back to full strength. A pair of Canada errors – poor return kick and collapsing in the scrum – allowed Cantorna to line up another penalty from the 22. The flyhalf was solid: 19-13 to Canada.

Canada had incurred a yellow card for a repeated infringement in the breakdown, and then in the fourth quarter, the same Canadian player’s shoulder made contact with Hamdan’s head as the hooker was being driven into touch. The second yellow meant a red card, and the visitors played with 14 for the remainder of the match.

There’s a lift in the U.S. side and exciting moments like a blocked Emily Belchos kick and Zackary break hint that the Americans are playing with a renewed vigor. Canada was able to weather it on defense, however, and then Cantorna was helped off the field. Canada kicked to touch at one point and attempt to keep it in-bounds was a forward pass, so Canada kept possession and just built to the U.S. end. Flanker Karen Paquin finished the drive with a 20-meter weave through the defense. The conversion gave Canada the 26-13 win

“We have to do the basics well under pressure,” USA WNT head coach Rob Cain told USA Rugby. “We’re working really hard to put things right but at times, out on the field, it’s not showing. These are really, really harsh lessons; but lessons that we need to start getting over because if we want to do the things that the group speaks about, then our precision and our accuracy in big momentum swings have to get better.”