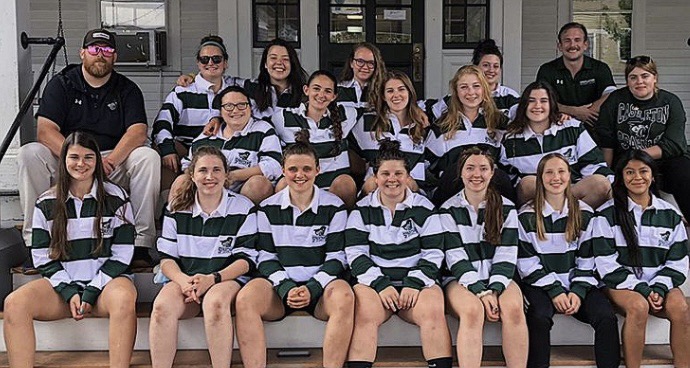 Castleton University is a Division III team within the National Intercollegiate Rugby Association (NIRA) but the Vermont program has remained in the developmental league for the entirety of its varsity existence. But there’s been a reboot this school year and some of the visible gains can be seen in the Spartans’ two shutout wins last weekend. The hope, however, is that these successes are a marker of longer-term successes to come.

Denver Divens took over as head coach in July 2021, replacing Frank Graziano, who is now the head coach at Manhattanville College, another DIII NIRA program. He found rugby after first playing SUNY Brockport football. Divens fell in love with the sport and wanted to give back, and his interest piqued in 2016 during the early years of NIRA. He actually applied for a few coaching positions at varsity programs before ultimately joining Castleton University’s football staff. After two years as an assistant coach, he applied to the vacated women’s rugby team position and officially took over last summer.

“There were four girls on the team,” Divens said of the state of the program when he arrived. “All four of them are now our captains and they’ve done a great job of helping me find girls on campus, setting up practice schedules, doing off-campus things like team dinners to build chemistry.”

Divens had to rebuild the roster and fortunately for Castleton, he loves to recruit.

“Recruiting is my big thing as a coach,” he said. “And admissions at Castleton has been wonderful. I worked with admissions the last two years recruiting for football, and they were the first people I went to when I took this job.”

Divens explained that admissions tracks everyone who’s come through Castleton, especially athletes. He requested a list of students who indicated that they were interested in collegiate sports but aren’t currently playing, as well as incoming freshmen who were looking to play a sport but hadn’t signed onto a team yet.

“I found track runners, softball players, basketball players who had stopped playing their sports for whatever reason or didn’t show up to tryouts,” Divens said. “We also got players who never thought about playing collegiate sports. But admissions helped us find athletes, and that’s part of the reason why we did so well last week.”

Castleton now has 17 players registered, but only four have any playing experience (before Sunday’s games). The quartet of returners are the captains are they’re charged with shaping the group into a rugby team. Aubrey Tetlow and Tovah Coe lead on field. They are most knowledgeable of the returners, and they’re important liaisons between the newcomers and the coach, stepping into explain things when individual conversations with Divens aren’t possible.

Saidi St. Andrews and Natalie Simecek bring important leadership to the squad as well. They’re building the cultural elements of the team and making sure the crossovers understand the ethos of rugby and the goals of the program.

“They’ve taken a lot of pride [in the rebuild],” Divens said. “They were in such a rough patch and now they’ve banded together and are just rebuilding something they love so much and that can last at Castleton for years to come. Morale is high and it’s because they’ve done so much themselves to bring this sport back to the school. It was a club sport for such a long time and they were a very successful club team. Alumni were upset when they went downhill once they became affiliated with the NCAA, so this group of girls made it their mission to bring it back to what it once was.”

Divens thinks this mission appeals to a lot of athletes, especially those who miss being on a team and are willing to try a new sport.

“If we were an established team with 30-plus girls and an intense environment, we might not do as well as far as on-campus recruitment,” Divens said. “But with everyone being so new, it creates a certain kind of chemistry and culture.

“These athletes are some of the most coachable athletes I’ve ever had in my life,” the coach continued. “There’s something different about an athlete who’s never played the sport. They’re inquiring about every aspect of the game and want to learn. They want to learn how to do it right, which is very different from coaching someone who’s been playing their sport since they were five years old. They might think they know how to do it better or decide to keep on doing something the way they’ve always done it.”

“We didn’t try to do anything fancy,” Divens said of game day. “We played base rugby. We practiced a few game plan things and knew what we had to do. We have some athletes with great speed, so we hit it quick up the middle to suck in the defense and then sent it out as fast as we could.”

Tetlow scored the first and final tries of the first game, and Hannah Coupas also dotted down. Haley Conway added a conversion for the 17-0 win. In the rematch, Coupas, Coe and Tetlow scored again, and another Conway conversion sealed a second 17-0 win. The outing marked Castleton’s first-ever shutouts in NIRA and also the most points the team has scored against an opponent.

“Defense is really big for us,” Divens said. “Castleton, back in the day when it was an established [club] program, was a very hard-nosed team. We wanted to get back to our roots with that and practiced a lot of open-field tackling, and tackling in general.

“It was really good to see smaller, younger athletes making tackles on girls twice to three times her size,” Divens spoke specifically of freshman Katelynn Dunn. “It was constant all game, and that’s all hard work and practice. I was very happy about that.”

Divens was also pleased with the impact of the bench. Freshman Ginny House came on and kept the tackle rate high. Senior Haley Conway, a basketball player at Castleton, pumped up the forwards. She kicked well, was very aggressive and was also good in contact.

“I didn’t stop smiling,” Divens said of post-game reactions. “This is my first game as a head coach, ever, in any sport. Any head coach is going to be a little nervous. You can make all the practice plans, go over everything in your head, and think you’re going to be O.K. But you don’t know until it happens, and it came together way better than I ever thought it could for our first game.

“They are on the same note. They’re absolutely pumped,” the coach continued. “They felt like they’ve been looked down on because of where they were the last three years prior to Covid. They’re very excited and very ready for what comes next.”

Castleton was supposed to play Manhattanville this weekend but the Valiants are re-evaluating after last weekend’s games against Mount St. Mary’s.

“Let’s put it this way: If they could circle one game on the calendar, that would be it,” Divens said of the players.

If that matchup doesn’t happen then Colby-Sawyer is next on Oct. 3. Another big match is DIII Norwich University, which is eligible for the post-season, unlike Castleton.

“It’s hard to put a goal on this season specifically,” Divens said. “A goal as a program is to get out of the developmental league and become a DIII complete sport and full DIII schedule We want to play and compete for a championship, whether that’s in the near future or in years to come – but that’s what we’re looking for: to be established and for people to know who we are.”