An industrious group of coaches ensured that girls’ high schools in Western New York had a spring season, and last weekend, Buffalo’s top team, City Honors, won the state 15s title. For head coach Matthew Frank, who joined the program in 2014, the trophy is a first-time achievement. 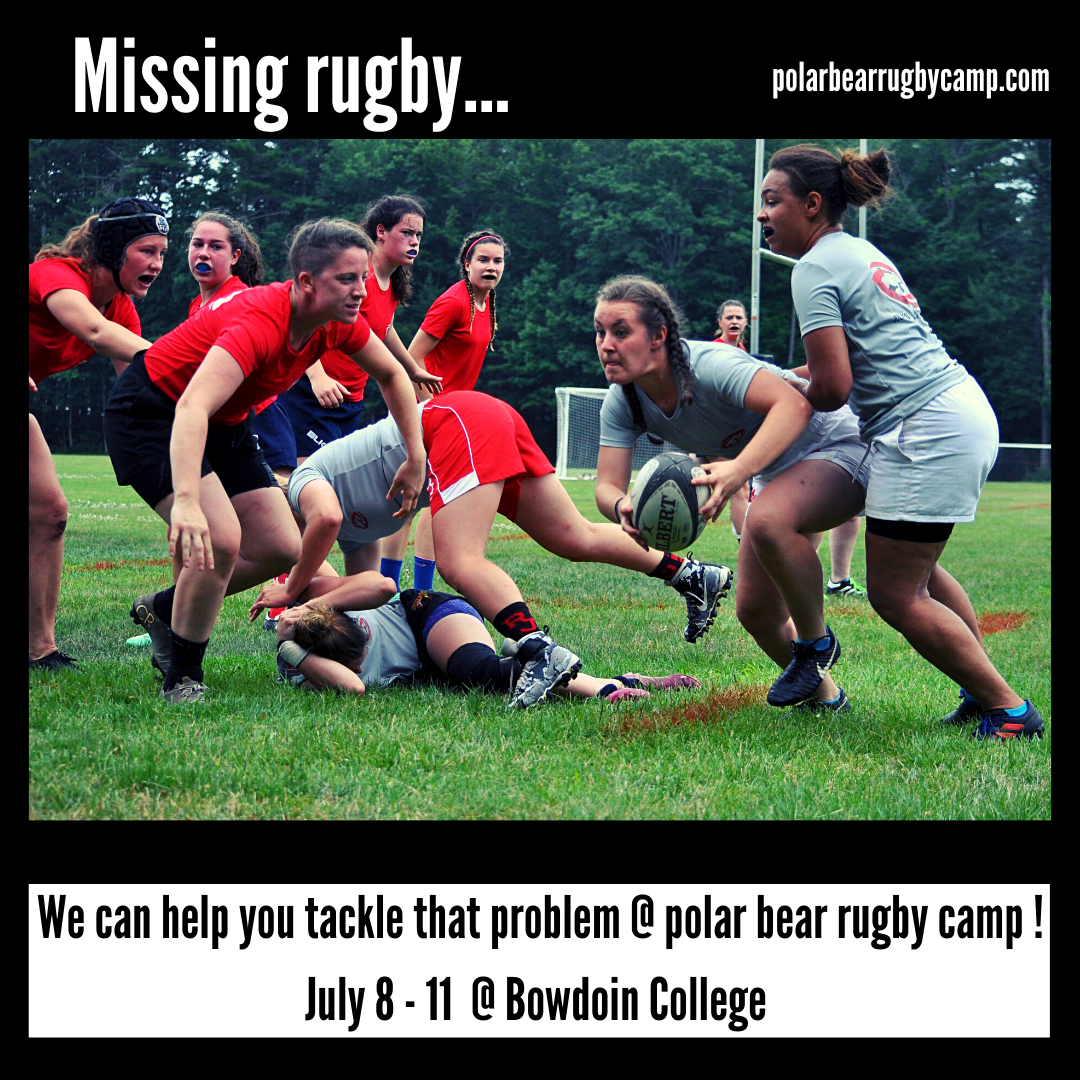 Covid-19 canceled the Western New York season in spring 2020, but City Honors was able to assemble during the summer for conditioning practices, all while adhering to safety protocols. That activity attracted some new players, simply because kids were looking for something to do and this team was making an effort. 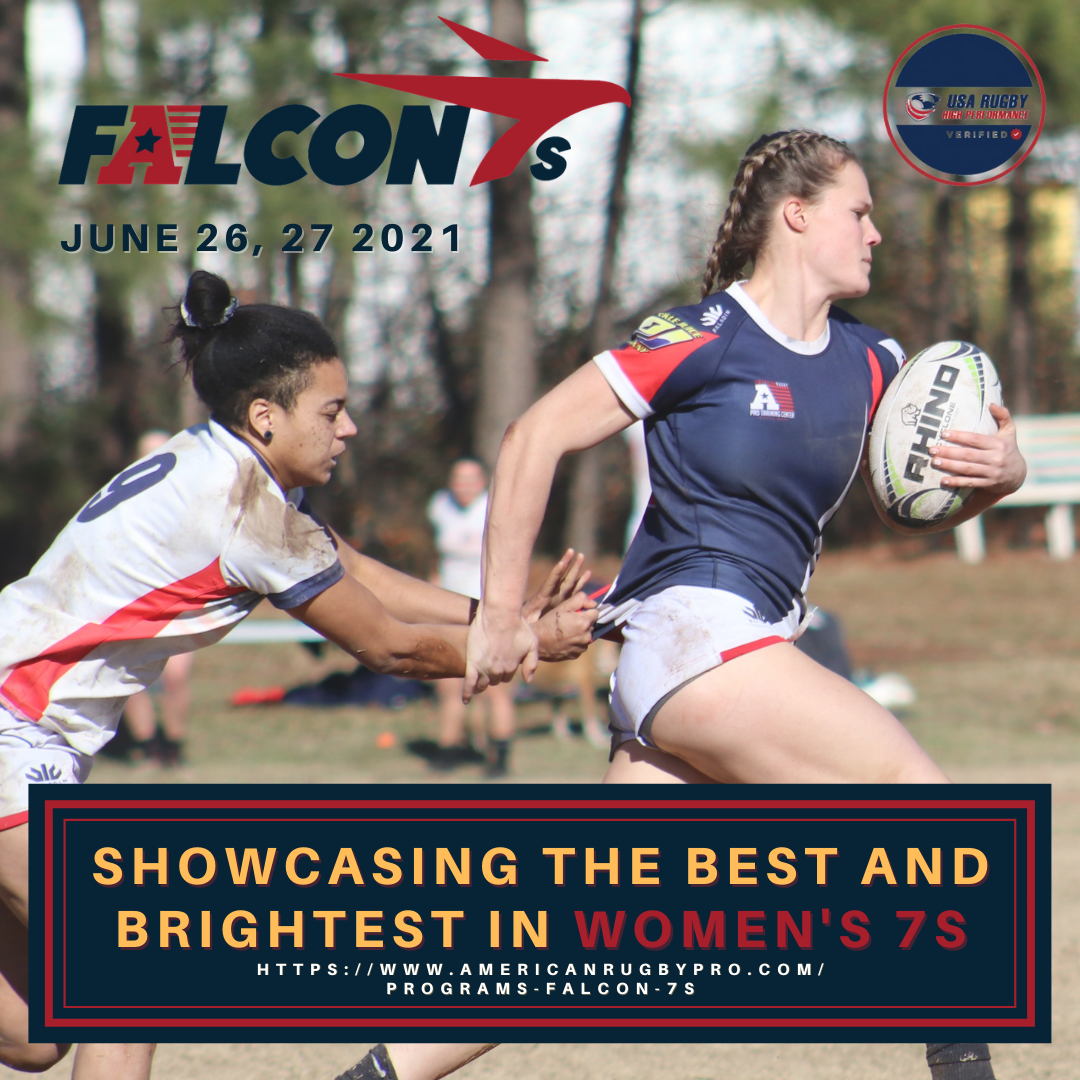 “Seeing them year after year and the leadership roles they took, you could ID them as future captains when it was their time to take over,” Frank said. “Especially Bella O’Hara. She was all about rugby from day one and always wanted to learn more. Bella came with more natural talent but Shahzoda and Ava worked hard, went to all the camps and did all the extra stuff. They showed that you can grow into a star if you put in the effort. They all came with different athletic prowess and the fact that they’re all leaders is a good example for the girls coming up now.”

Approximately 30 players signed on for the spring 2021 season – a pleasant surprise, tinged only by the fact that there were no freshmen this year. Students didn’t return to the classroom until February 2021, so it was difficult to recruit newcomers who didn’t already know someone to connect them to rugby.

There were still limitations on group size and contact when the team started training in March 2021. But the players were responsible and the spring elapsed without a positive Covid-19 case, which would have shut the team down for two weeks. 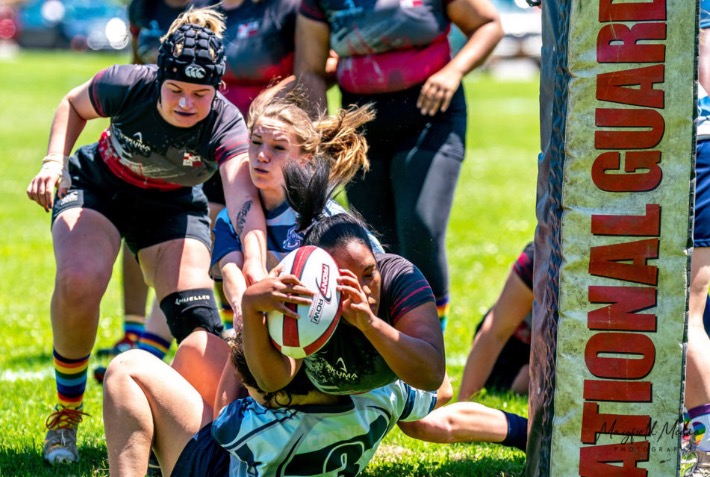 “The closest we came [to a positive case] was early in the season before we traveled to Michigan,” Frank referenced the pre-season trip to Adrian, Mich. “The mom of a brand-new player [Georgie Reinhardt] got Covid. She tested negative and then moved out of her house to live with her grandmother for two weeks so she could play.”

Reinhardt wanted to make sure she was available for the Adrian College high school 15s tournament. City Honors played three games – and scrummed down for the only time this season – and finished third overall.

“It was really exciting because we didn’t know what to expect, since the last time we played together as a team was February 2020, when we toured Ireland,” Frank said. “I was impressed! It was like we never had a year off. The girls were itching to play, to do anything rugby.” 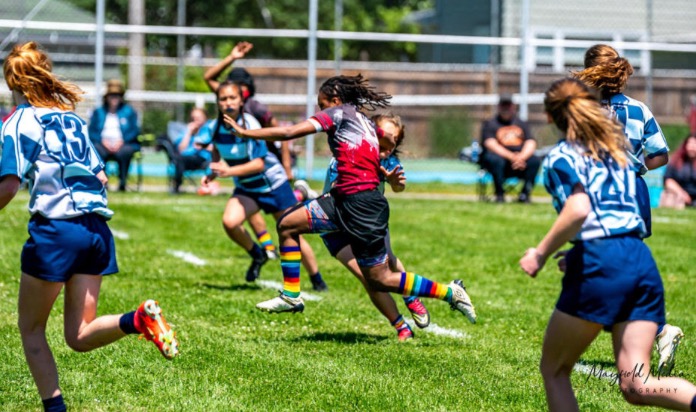 The tournament was part of a larger talent I.D. weekend for Adrian College, which is joining NIRA in fall 2021. Teams toured campus, were provided lunch, and met with coaches looking to build the next NCAA women’s rugby program.

“It was great to go there and win, especially for the girls who have aspirations to play at the next level,” Frank said. “They were disappointed that nationals and other tournaments were canceled last year [and in 2021], and they didn’t have the opportunity to get their faces out there. People like [junior] Lexi Erdolino, our prop. She’s probably the best player in New York State, and people are starting to recognize that.”

City Honors fielded 10 seniors this season, two of which were first-years. Backs Daniyah Green and Rickelle Jones integrated superbly, and Green has received offers to play at Adrian and Long Island University, among others.

“The senior first-year players that came were just so impressive,” Frank lauded Green and Jones. “Green is coming from a low socio-economic status, and college probably wasn’t going to happen for her, but now rugby is making it happen. Bella has a full ride to LIU. Those are the things that I care about.”

City Honors had more than a month between the Michigan tournament and the Western New York league beginning on May 2, and the team made good use of the time. Covid protocols eliminated scrums and lineouts, so the staff didn’t spend time teaching those set pieces. Instead, the staff saw an opportunity to elevate the team’s game, diversifying positional expectations and introducing a more integrated, connected style of play.

“We moved away from, ‘This is what a forward does, and this is what a back does,'” Frank said. “I know the front rows missed the scrums, because they take a lot of pride in them, but they were also excited by the free-kick [replacement] option. ‘You mean we get five meters to run with the ball directly at them?!'”

Previously, the expectation for a free kick or penalty was tapping the ball and shipping it to one of the big forwards to crash through the opposite pack. But with more opportunities for ball in play, City Honors took the opportunity to experiment.

“One assistant coach, Ray Ignasiak, he’s our offensive game coordinator, he came up with fun plays off the free kick and penalties that got others involved in the shifting and movement of the game,” Frank said. “Everyone bought into the scheming and game planning, and it was, ‘We have three pods. If it’s this play, then it’s going to this pod,’ and so on.” 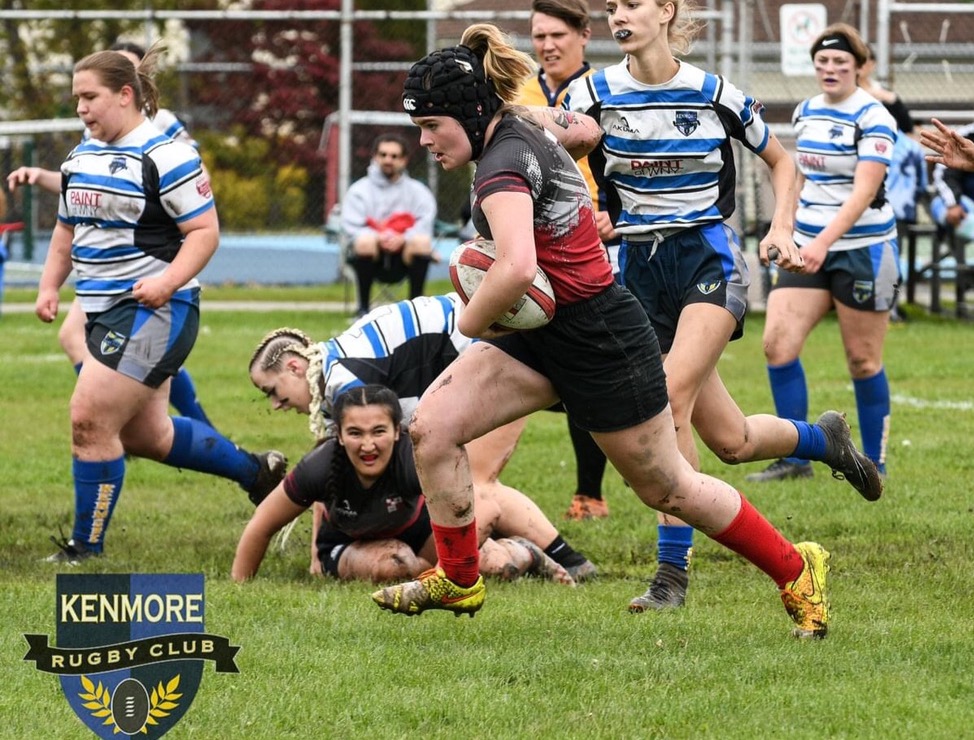 The team responded to the newly styled game, but as the ball passed through more hands, it wasn’t the attack that showcased players’ hidden talents. Those revelations came on defense.

“It helped ID who just wants to make tackles and play defense,” Frank said. “Georgie Reinhardt – a brand new player who came from softball – she would be the first person firing up on defense to make the tackle. It didn’t matter how big the ballcarrier was, she would come up and make that hit. That jumped out at us.”

Six teams comprised the league, but only City Honors, Orchard Park and Corning had the numbers for complete 15s games. In between, teams would lend players to the opposition so that games could occur and teams that were still regrouping could build some momentum. It’s a kinship that is also reflected in the Buffalo coaches themselves.

“The players were always willing and able to play for the other team,” Frank said. “One of our first-year players, Ciah [Courtney], played her first three games for the other team, and she wore that as a badge of honor. I’d send my stars over, too, just to make it exciting for the other teams, and hopefully through that we help programs grow so one day they become good competition for us.”

The vibe intensified against Orchard Park and Corning, and those matches allowed City Honors to indulge in its competitive spirit.

“Those teams are well coached and want to beat us, and if they we don’t play at the level we can play at, then they can beat us,” Frank said. “Corning, for example, has an awesome outside center. We got up 31-0 [in our regular season game] and then started coasting. Then Corning scored three tries in a row, and it’s 31-21. We ended up winning [62-21], so it was nice to see the girls react to some adversity and have that poise to overcome a swing in momentum.”

Orchard Park has been the big game since Frank arrived in 2014. City Honors beat the Bulldogs for the first time in 2019, but finished second in the state to Play Rugby Academy. The Centaurs then missed the opportunity for a second win against Orchard Park in 2020. 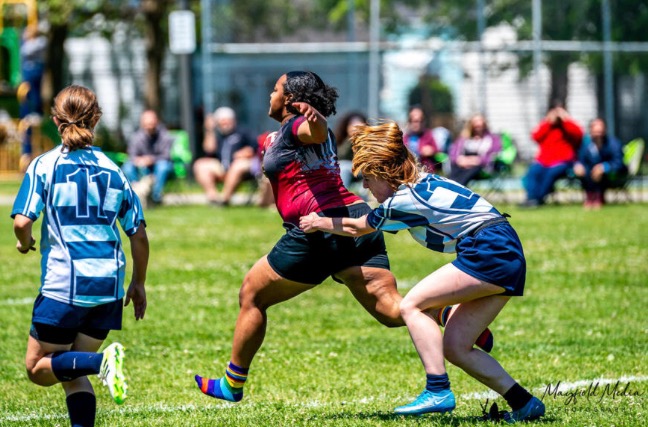 Jaylei Wagstaff runs right out of her shoes / Mayfield Photography

“I had five-straight years of Emily Henrich,” Frank said of the Orchard Park star who is now a USA 15s captain. “There are still players who remember going into states thinking, ‘This could be our year,’ and then Emily just took over the game and we lost. It means a lot to the girls to now be on the winning side.”

City Honors won the teams’ regular-season game 56-12 and then lined up against each other for the Western NY final on June 5.

“We came out really slow and they had a good defensive game plan, and we didn’t adjust well,” Frank said of the final. “One captain [O’Hara] was yellow-carded and suddenly we’re down 7-0. We had to collect ourselves and refocus, and made some in-game adjustments. … It was just another example: If we don’t come in focused, there are good players all across WNY who can change the game.”

The captains organized the team, and prop Erdolino harnessed her game-changing abilities. 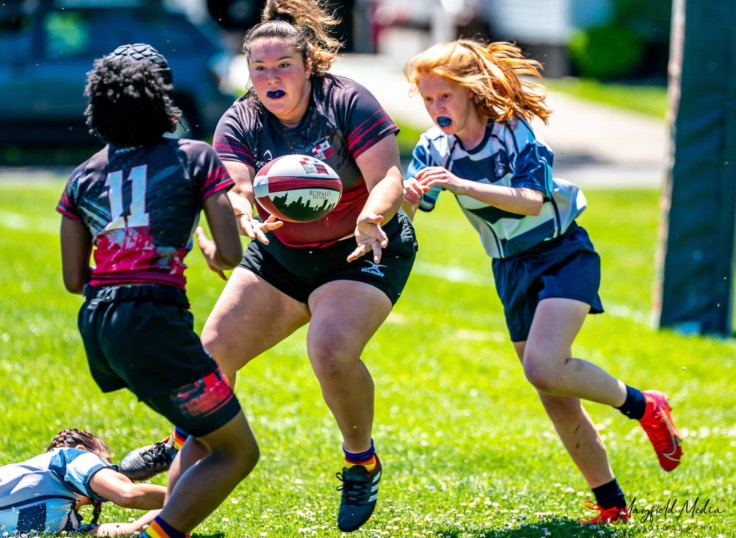 “She is such an impressive player,” Frank said of the team’s leading try-scorer (16). “She’s always the biggest and strongest on the field, and she usually plays the whole game. We had one AR say, ‘She shouldn’t be that fast, especially after playing a full 15s game.

“After Orchard Park’s first try, and being down a very good player in Bella, she knew she had to take over the game,” the coach continued. “She scored our first try from five meters out, where she’s impossible to stop. You’re just not doing it. She lifted the team back up, in the forwards especially.”

Flyhalf Felicia Toomey and outside center Kaori Segars had the speed and footwork to invigorate the back line. And inside center, 90 lb. Tina Costello, absorbed a relentless defense, absorbing hit after hit, but ensuring the ball made it past the inside backs. 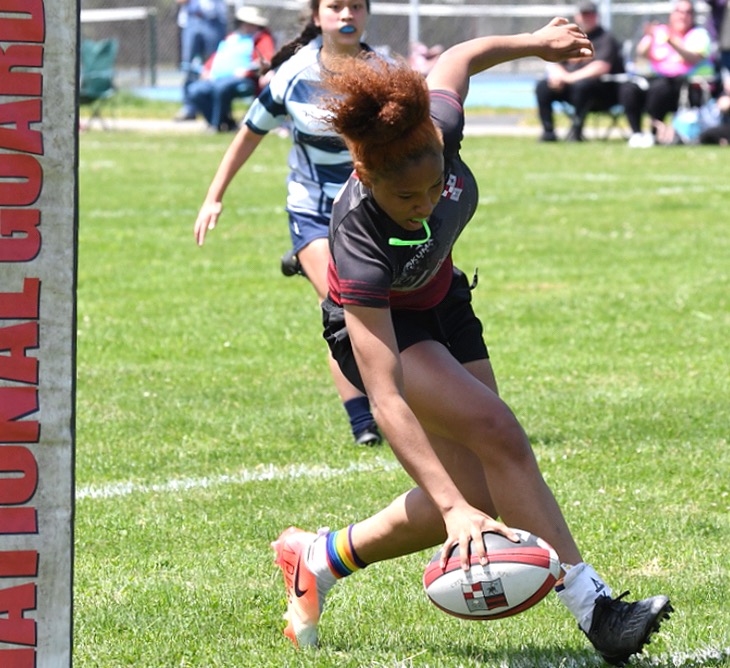 “Lexi focused the forwards and we were able to draw them in with aggression there, and that allowed us to get the ball wide,” Frank said. “Kaori scored right before the half and then opened up the second half by breaking three tackles to get to the try zone and then another three tackles to center the ball. They were not going to lose that game. ‘This is not how our season is going to end.'”

“This was the first state title for me as a coach – with this team or any team, and I’ve coached a lot of sports. I’ll always remember that, and same with the girls,” Frank said. “They don’t want to stop playing. ‘Can we do more? I miss practice!’ It’s a special group of girls. They came together in the weirdest one-and-a-half years we’ve ever had, and it’s something to carry with me forever.” 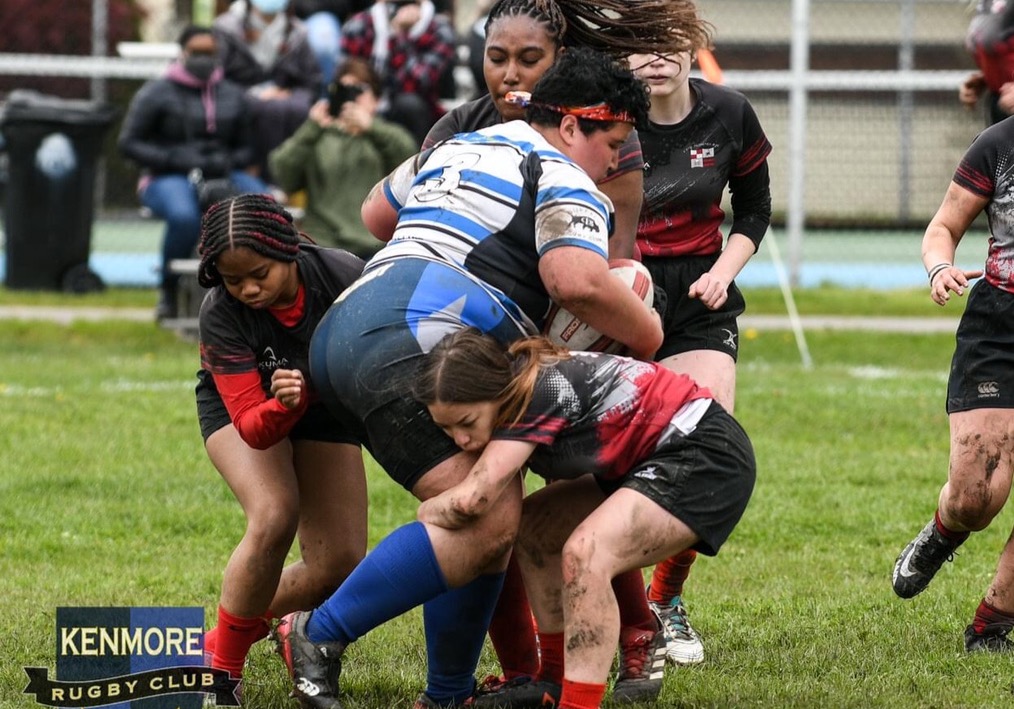 City Honors has a little bit more to look forward to this season. There’s the team banquet and announcement of player-selected award winners. This weekend there is a WNY Lightning game for whoever wants to play. And then the team got its wish to play in a Buffalo 7s tournament this summer, although Frank warned that the entire coaching staff will be venturing out of its 15s expertise. It’s just another opportunity to be and play together, so regardless of the outcome, it’ll be a win.