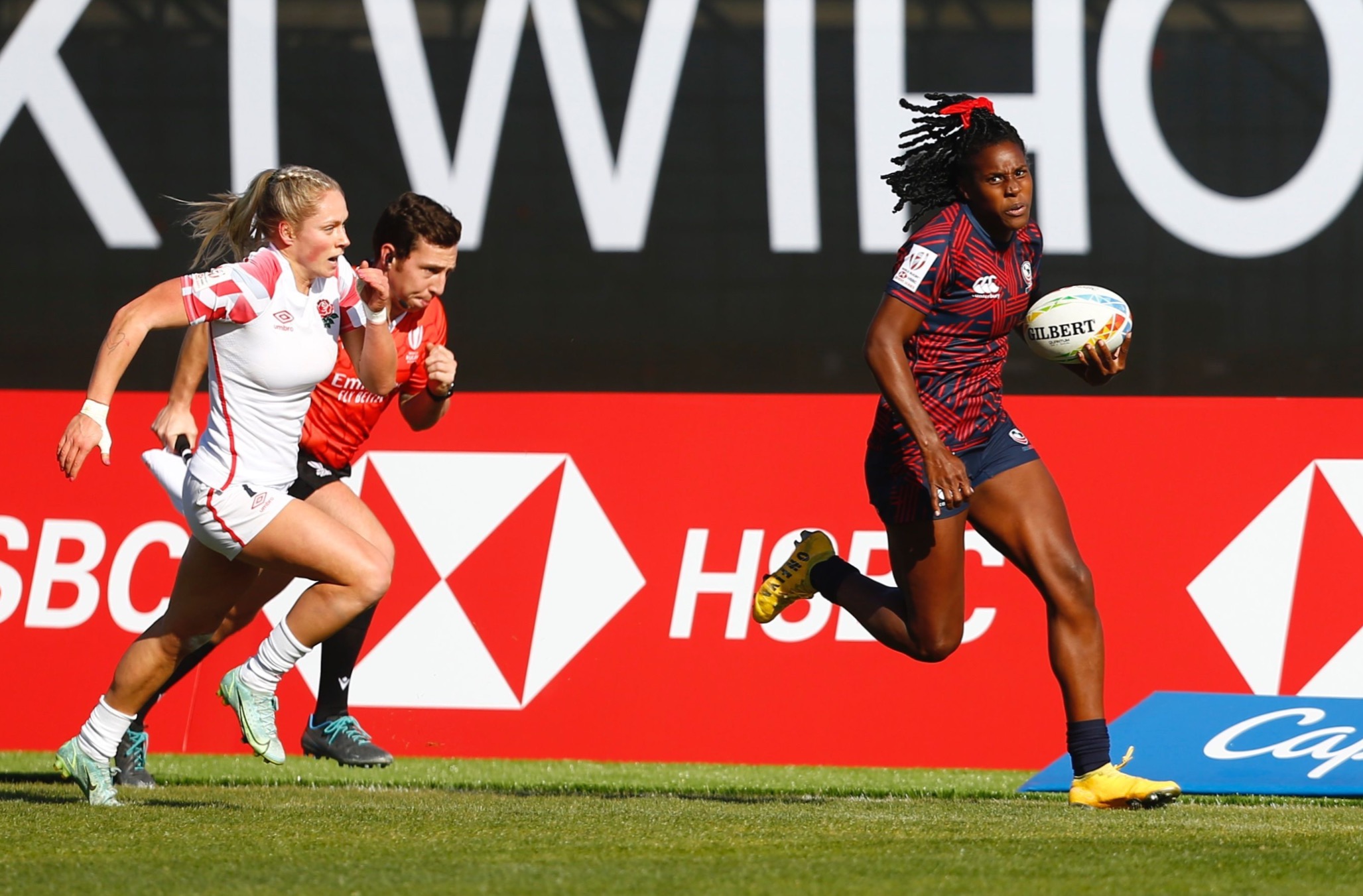 The USA are 3-0 at the Malaga 7s, the third leg of the HSBC World Rugby Sevens Series, after defeating England 22-17 in the Cup quarterfinals. The Eagles advance to the Cup semifinals and will face France at 4:44 a.m. ET Sunday.

England is young in terms of the current group having fewer than three weeks together. The squad has quality experience in players like Abbie Brown, Emma Uren and Meg Jones, but as a cohesive unit, it’s still building chemistry. Nonetheless, England played with creativity and verve, and kept the outcome of the match in limbo.

The USA never trailed throughout the match and its expertise and confidence were displayed in a full-length try in the second half. The Eagles were playing out of their own try zone as England ravenously pressed in defense. Kris Thomas masterfully stepped a defender and drew the attention of two more English players before feeding Ilona Maher out of the tackle. The power forward took the offload at the try line, bumped off Ellie Boatman, and raced 100 meters for the score.

The game began with a USA high-tackle penalty on England’s 22, and Jones, who was such a playmaker all match, kicked off the ground a couple of times to move the game to the USA 10. Play restarted with an Eagle lineout, and the squad did an excellent job with its first possession. Kayla Canett carved through some space, waited for the defense to come across, and then fed Jaz Gray for the sideline sprint to the try zone, 5-0.

The wind was on so the USA’s first-half restarts flew deeper. But with the help of consecutive penalties, England was able to get the U.S. defense scrambling backward. Uren eventually broke free on the wing and connected with Boatman back inside for the try, 5-5.

Both sides added another score before the halftime hooter. Maher received the restart and sucked in some defense on one sideline, and when the ball recycled, Nicole Heavirland spied some space for Naya Tapper out wide and sent a long skip pass to the team’s leading try scorer. Tapper came through with her 97th career try and Heavirland added the extras: 12-5.

Tapper was visibly gassed from the long sprint and a step slow reacting to the subsequent restart. Jones gathered the ball, spun away from Cheta Emba’s hard press, and rushed past Tapper for the sideline sprint and try, 12-10.

England rode that momentum into the break and really should have ended the half with another try. Slow support to the ruck afforded a not-releasing penalty, and from the England scrum, flyhalf Jones again kicked through and followed with the chase. Heavirland gathered the ball but with no support, another penalty followed. From 10 meters out, England took the tap into contact and then spun the ball wide, where the defense of Lauren Doyle prevailed. A penalty ended the series and a kick to touch closed the scoring opportunity: 12-10 to the USA.

England played with the wind in the second half and its opening kickoff sailed long and into touch at the USA’s five meter. A clean, short lineout went to Maher, but the English launch and swarm pushed play to and behind the try line. The Eagles played with such confidence in the high-risk series, and were well rewarded with Maher’s long-range score, 17-10.

One eagerly awaits the photos from this match, as the next series marked a supremely graceful feat of athleticism and skill. Thomas raced off the line from the restart and without breaking stride plucked the ball out of the air and out of England’s also sky-reaching hands. Thomas hit the ground running, so fast that she used her arm like a rudder to change direction toward the center of the try zone. With a huge smile, Thomas joined the entire viewing crowd in marveling at that aerobatic move, 22-10 to the U.S.

There were still four minutes to play, and England was ready to close the deficit. Another kick-through and several penalties put the Red Roses in scoring position, and then Thomas was sent off for two minutes. Brown took the tap from five meters out, and as ref Julianne Zussman played advantage, Uren found a seam for the div-over try. Jones converted for the 22-17 scoreline. 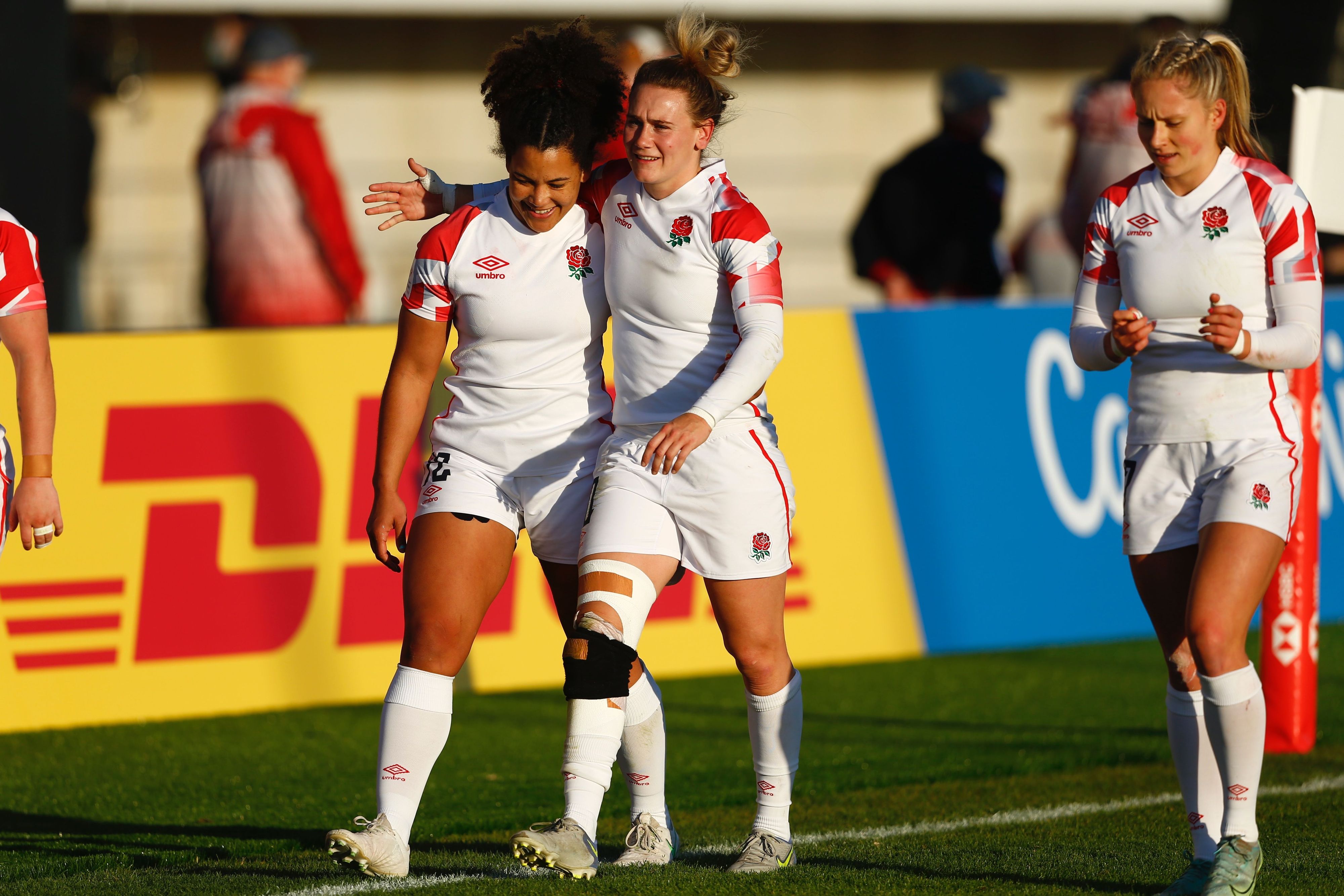 Expecting another long restart, the USA set up deep, and Jones wisely sent a grubber across the Americans’ 40. The flyhalf nearly pulled off the surprise tactic but just knocked on. The Eagles were lucky to restart with a scrum, but after a couple phases, an unforced knock-on put the ball back in England’s hands.

There was a minute to play and the set piece needed to set up one more scoring opportunity for England. But a miscommunication in the wrap-around produced a knock-on, handing over possession, and essentially ending England’s best chance for a comeback.

Instead, the Eagles held onto the ball and gained a yellow card advantage with an unintentional knock that likely would have seen Maher score another try. The game ended with a kick to touch and the Eagles’ berth to the semifinals. The USA will play France, which defeated Ireland 33-5 in its quarterfinal, at 4:44 a.m. ET Sunday.