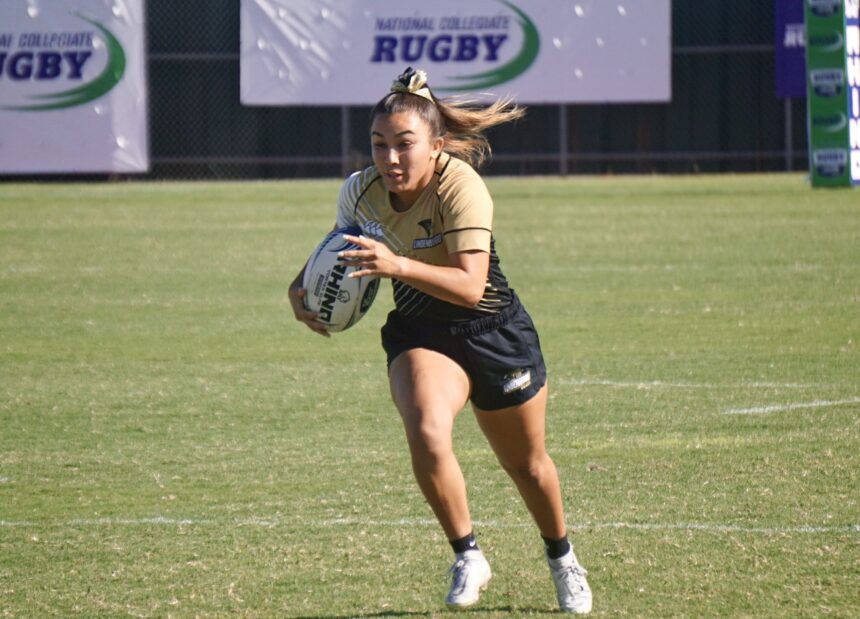 Three of the four semifinalists have long histories at CRCs, and Penn State used to be the “local team” back when the event was held in Chester, Pa.

The Nittany Lions played a tough Round of 16 match against Claremont Colleges: 24-12 the final. In the quarterfinals, Penn State beat Univ. Northern Iowa 38-0.

Bjorklund, Darina Roe and Camile White were all influential and will continue to be so when Penn State readies for Lindenwood tomorrow. The Lions shut out Notre Dame College 33-0 in the quarterfinals.

“Hopefully, I’m looking forward to putting some heat on Lindenwood,” Bjorklund looked toward Sunday. “It’s always fun playing them because they’re such a high-level team. They play so cohesively and it’s just beautiful rugby so it is fun to play against them.”

On the other side of the bracket, Life beat UC Davis 41-0 in the quarterfinals.

“We’re definitely being perfectionists right now,” Life senior Autumn LoCicero said. “Anything we see wrong, we try to fix it because we know we can’t make those mistakes in bigger games. … Every minute detail, whether that’s passing straight to people’s chest or tackling even harder and bigger. Just details.”

The Running Eagles will face Grand Canyon in the Sunday semifinals at 4 or 4:23 p.m. CT.

“We’re more connected so we’re having a little more fun,” said LoCicero, who graduates this spring, plays for the South U23 and PR7s this summer, and then will look for playing opportunities abroad (Australia!) during a gap year. “But we still have the same intention. We obviously didn’t get the job done last time [at the R7CC].”

The closest quarterfinal occurred in the final round, and for much of the game, Grand Canyon and Virginia Tech were within a conversion of each other. The Hokies featured in the DI Spring 15s championship in mid-May and quickly transitioned to 7s. Grand Canyon had about a month to learn 7s.

Virginia Tech scored first and then Bianca Curtis scored for the Arizona team and the conversion put the Lopes up 7-5. Angel Lucero scored a long breakaway try to give Grand Canyon a 12-5 lead. But Virginia Tech pushed to the final whistle, using back-to-back penalties to get the ball down to Grand Canyon’s try line. Ultimately the game ended in touch and the Lopes move on.

“It’s important because the only way we’re going to get better and continue to have a successful 7s program is to play teams that are at Virginia Tech’s level and higher,” GCU co-captain Danielle Sileo said of the importance of tough games. “And we’re just excited now to challenge ourselves.”

Sileo praised the grit, intensity and ball-handling of the team and noted a key work-on for tomorrow: taking the time to reset after mistakes.

The teams that lost their quarterfinal now funnel into Sunday’s Premier Plate (aka, 5th place playoffs):

The four teams that lost their Survivor Shield quarterfinals will compete toward the Challenge Bowl, aka, 13th place bracket.